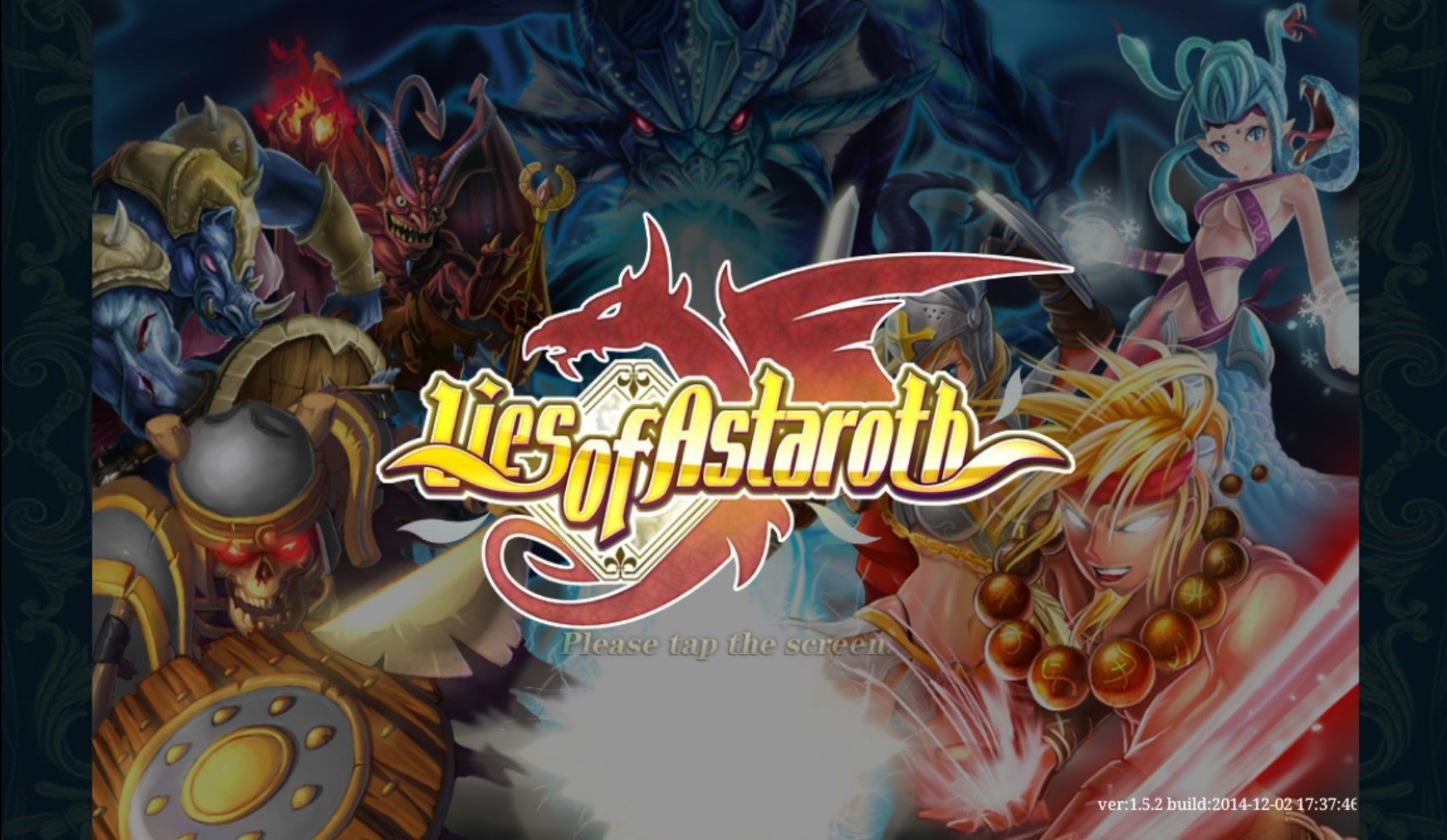 With the glut of games available on both Android and iOS, it’s no surprise game developers started smashing genres together in hopes of creating a product to stand out from the rest of the cookie-cutter games available on our touch screens. One of these games that has seen strong success is Lies of Astaroth, a collectible card game RPG from iFree Studio. The store page boasts it as a “top 5 card game in more than 50 countries,” which is a great bait line to throw out for potential players. While Lies of Astaroth’s claim passes a lie detector test, its gameplay proves that popularity isn’t everything.

Lies of Astaroth’s deck building and card mechanics are simple and standardized. Each card has an element (Kingdom, Forest, Wilderness, or Hell), rarity, wait time, and cost. Wait time acts as the game’s resource mechanic, indicating how many turns you must wait after drawing the card to put it into play. Cost is an arbitrary number, primarily based on the rarity and power of the card, which factors into the game’s deck building mechanic. As seen in many other mobile games with card or party mechanics, each player’s deck has a limited total cost and number of cards which increases with level. The total cost limit acts as a soft cap on the power of a deck and as an equalizer in PvP. Deck size is quite prohibitive – its maximum limit is ten – which enforces the idea that the game is geared more as an RPG and less a CCG.

Each individual card also has its own level, attack power, hit points, and skill. All cards can be leveled up through the enchanting system, which turns unwanted cards into experience. As cards gain levels, they also gain attack power and hit points. At certain level milestones (usually level 5 and 10, but it depends on the card) cards also gain skills which will activate in battle automatically. The game offers easy ways to obtain fodder cards and even feast cards worth high experience, but it still takes a lot of enchanting to bring an individual card to its full potential. At higher skill levels, Enchanting also allows you to “skill shuffle” for a potentially better skill. 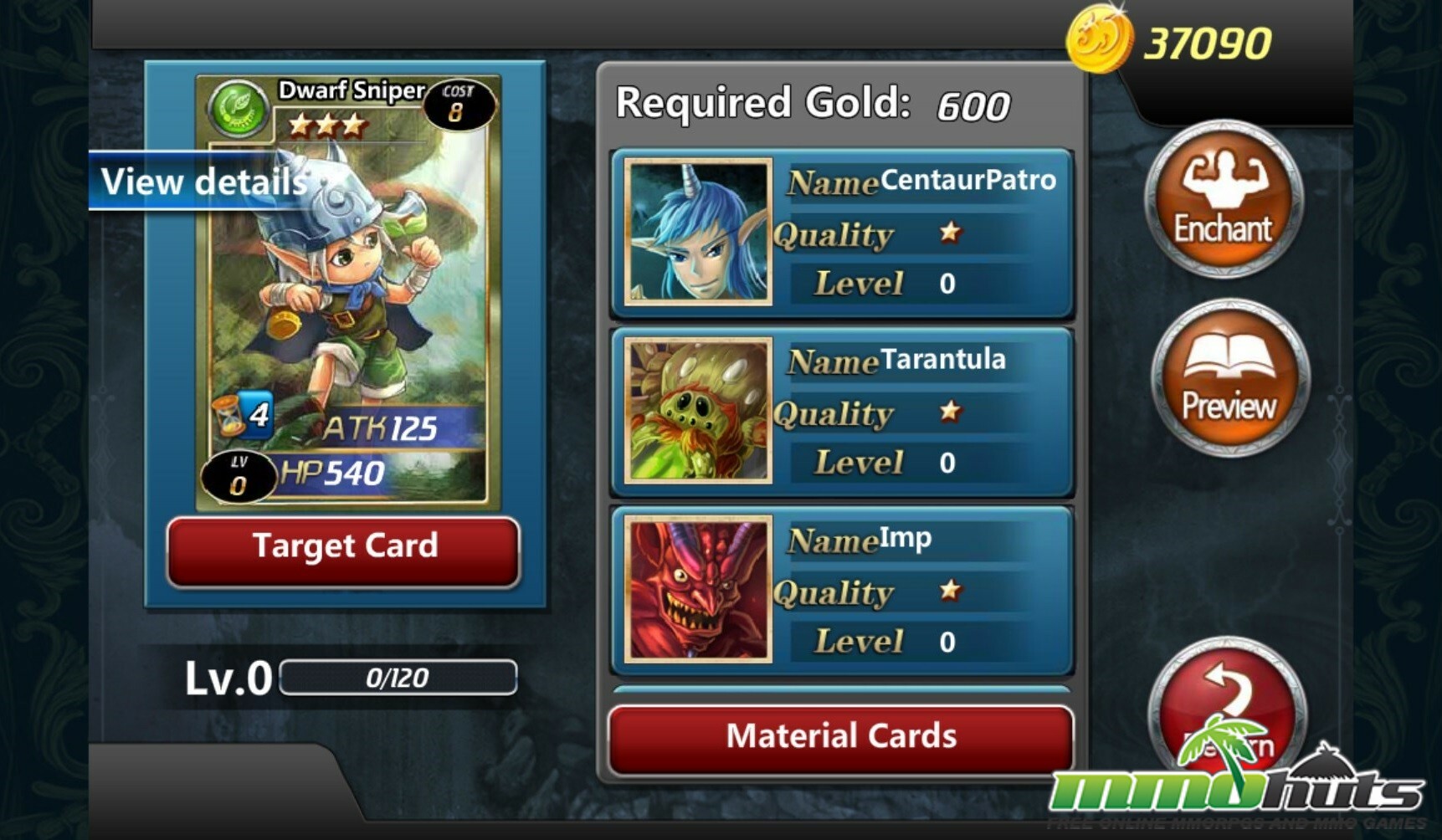 A sample of the enchanting system.

Despite the presence of four elements, Lies of Astaroth does not have a resource system like Magic: The Gathering. Elements occasionally do cause effects on certain skills, such as the Royal Guard’s ability to boost all Kingdom cards on the battlefield or the Gargoyle’s increased attack against Forest cards. However, these skills are not standard and decks generally neither require nor reward synergy. Deck building focuses more on the skills you want, such as a card with healing or parry to mitigate damage, and how powerful those cards are. While this is fairly important (much like other card games), the combat system makes even these choices feel negligible.

In addition to cards, decks also have an element called Runes. Runes are essentially skill cards, equipped to a special slot in your deck. You can ultimately have up to four runes equipped at one time. Runes’ abilities are activated when certain conditions are met on the battlefield, and are one of the most powerful plays in a match. Runes can also be enchanted to raise their power, but can only use other rune cards as experience fodder. These cards are rare – as any powerful artifact should be – and it takes a while to earn enough runes that fit your deck or play style.

The bulk of Lies of Astaroth’s gameplay lies in its single-player campaign, found through the Map icon. A light story unfolds as the player character becomes an unlikely and somewhat unwilling hero. You will find multiple numbered maps, each with multiple stages that unlock as you progress. Before each stage is a little dialogue to set the scene, which is (thankfully) neither long nor serious. Each stage is further tiered into Easy, Medium, and Hard difficulties with different victory conditions; higher difficulty levels unlock as you beat lower ones. Completing all the stages nets extra rewards and can award various achievements. 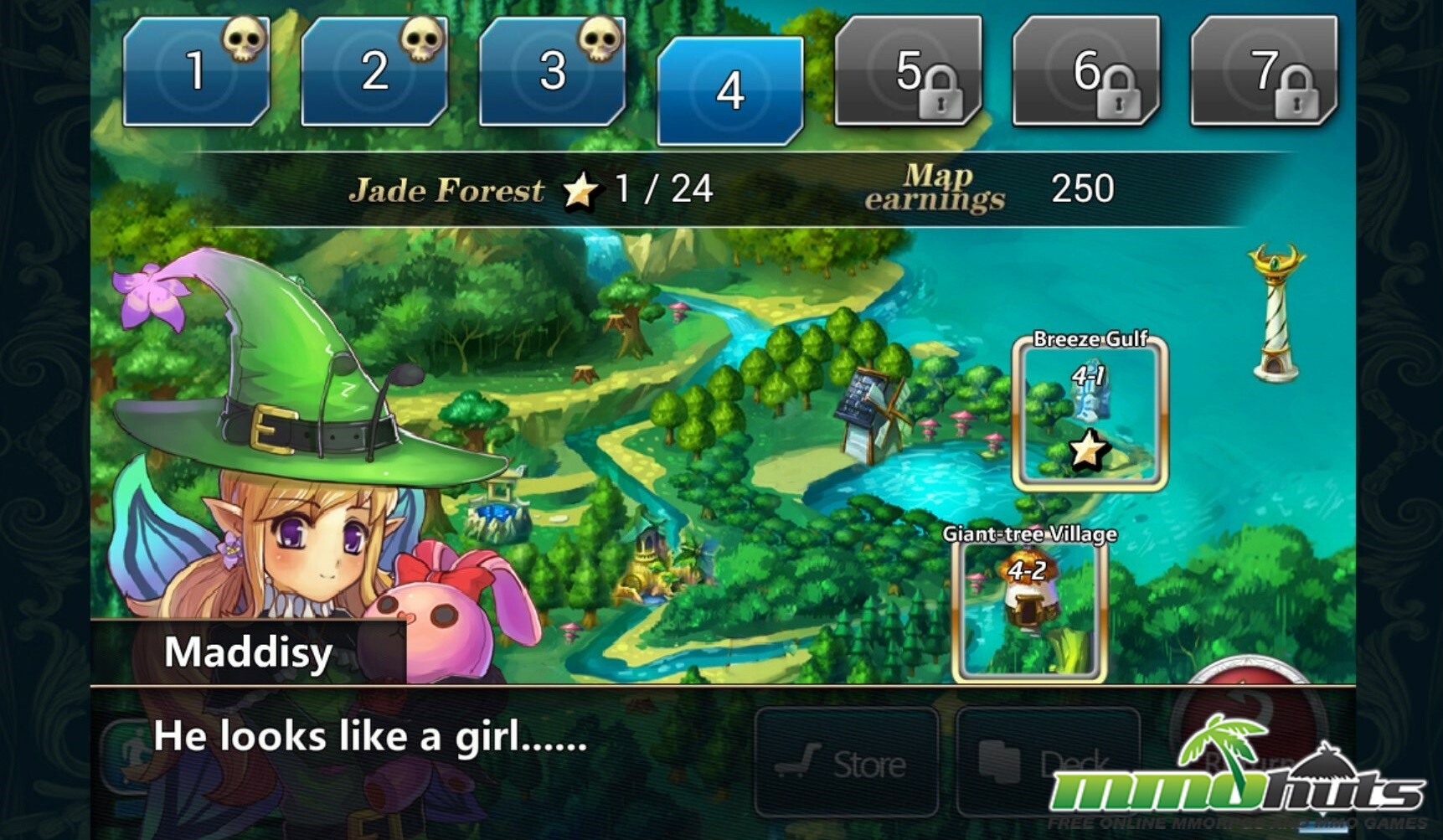 Maddisy is your judgmental and mandatory story companion.

Also found in the single-player mode are Thieves and Maze Towers. A Thief is a random event that can occur when “exploring” a stage (an additional action that can net various items and rewards). Once discovered, these bosses can only be attempted for a short period of time. Thief hit points don’t reset, allowing you to return and attack a second time if you fail, after an attack cooldown. Game friends can also assist you with thieves, which earns them their own rewards. Maze Towers, on the other hand, are found at the end of every map except the first. These are special stages that can be reset once for a free daily. Mazes consist of multiple floors that appear like game boards that you may move your hero on, and each has a set number of enemies and chests. Moving on the board does not cost energy, but battles will. Complete the maze to earn bonus rewards for your effort.

The remaining game modes may be found in the Arena. Free Match allows you to fight another player once every ten minutes without any cost or reward, and serves as a fair way to see how your deck holds up in the current rankings. Ranking Match allows you to fight fifteen times per day for free (subject again to the cooldown) to push your PvP ranking and gain experience and coin. You can also try your luck in the game’s regular Tournaments, which have entry fees and strict rules but also excel in the rewards they offer to winners. Clan Matches allow player guilds to lay claim to territories and battle it out for special gold bonuses. Clan matches are special, time-based battles in which players must be active and online during the match. Clans send four players out in the field in a “last man standing” style tournament, with the winning clan getting to hold the territory for a day. Clans can offer a great deal of benefits to their players, and these matches are the most unique thing LoA has to offer, making it the most exciting part of the game.

Finally, there is Dungeon, unlocked at level 30. This special mode is a tiered dungeon with one hundred floors. Players start daily on level one, and must try to fight their way to the top with limited losses per day. Each level has a special victory condition that may grant extra rewards, and a few milestone levels exist that make it easier for players to “sweep” to a higher level the following day. Completing levels also awards “rage,” a special currency that is reset daily. Rage can be used to buy dungeon-only buffs to further assist your climb to the top. Though it can be tedious, the Dungeon is a constant new challenge for players to face and defeat.

The battlefield is a fairly straightforward mirrored board. On the left you will see your enemy’s hero, your own hero, eachother’s runes and hit points, and the current turn number. Along the top and bottom are the ‘hands’ of drawn cards, visible to both sides, waiting to be played. On the far right are card “graveyards” for defeated units plus additional battle options, including auto attack, passing, skipping, and turn speed. I’ll come back around to “Auto” and “Skip,” but the ability to boost turn speed by three times is a feature many card gamers will be grateful for. 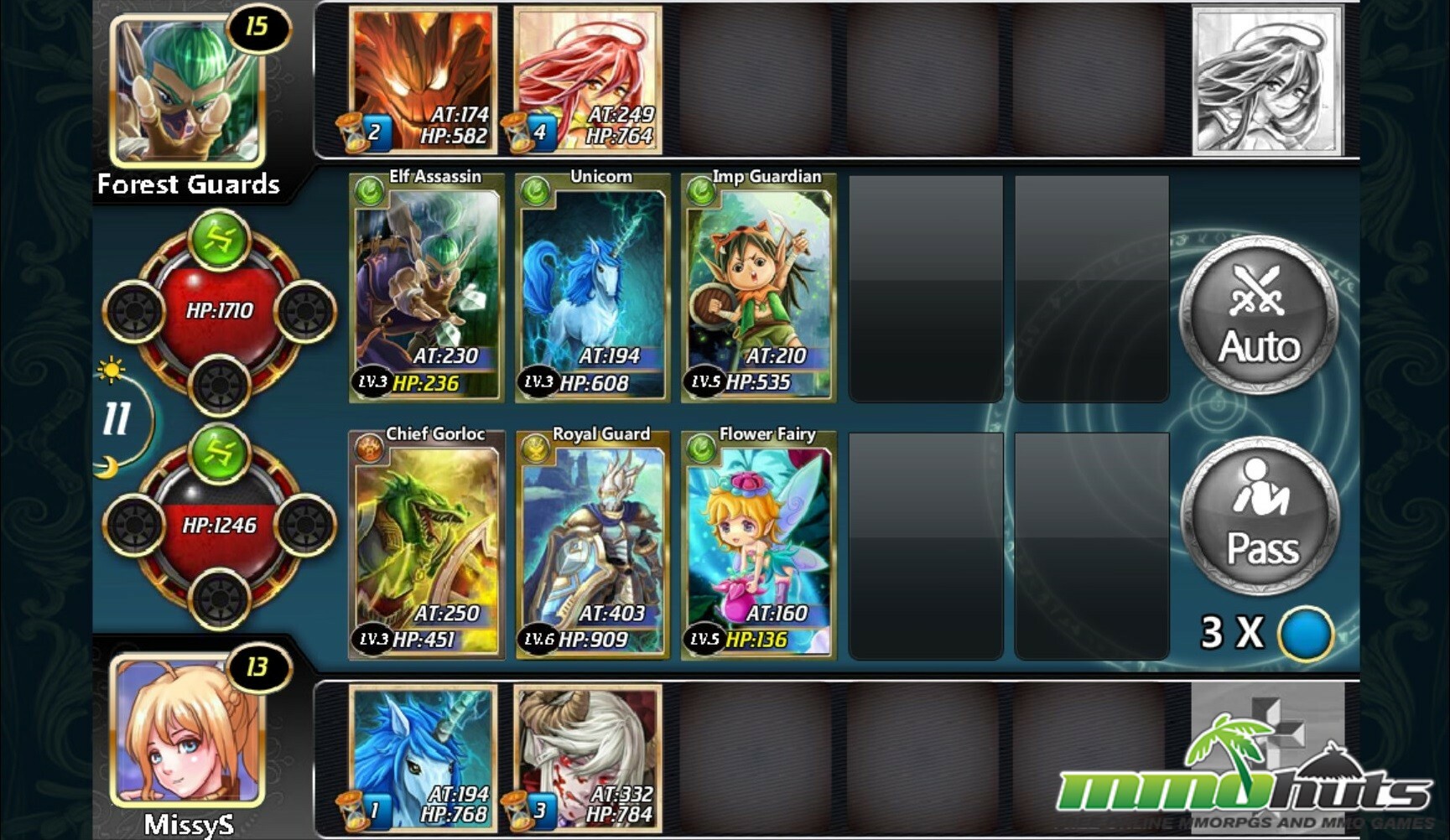 Each turn in LoA follows standard card game rules of playing cards into the field followed by attacking, but there’s very little input involved from players. A player’s turn consists of making one decision: play a card or pass. Cards will attack and heal on their own based on their own AI priorities; if you want a certain enemy taken out, or would prefer to focus on the enemy hero, you’re out of luck. Unfortunately, Lies of Astaroth has fallen into the trap of automating too much gameplay, particularly for its genre. With weak deck mechanics and little player input in each battle, even in PvP, the idea of LoA being a card game is almost a farce.

In fact, its attempts at being an RPG are equally weak: the player character has nothing but a deck to manage, and personalization is limited to a name and choice of gender. Level, experience, and hit points of the hero are all static points on a linear line. The game does have a thin story in its single player campaign, which, while at times is humorous, doesn’t make up for flimsy gameplay. To top it off, the fact you can allow the AI to automatically take turns for you (with a very high success rate) and even skip past battles in certain modes, means there’s very little left to praise.

Of final mention is the game’s interface. Lies of Astaroth takes a somewhat low-resolution approach to mobile gaming, opting for extra-large buttons and simplified controls. The end result is a cluttered, messy experience that can be downright frustrating for experienced gamers. The game’s main screen is claustrophobic, sacrificing 50% of its space for the UI, half of which is overlaid if you pull open the chat window. Switching cards in a deck requires tapping the card to pull up its information, clicking remove, finding the card you want by scrolling, tapping it, and clicking add – all unnecessary steps when plenty of card games allow for a simple “swipe and swap” interface. Card sorting itself is awkward, using a slot-wheel system that lets you select from preset sorting options rather than selecting by characteristics. Since the game lacks a proper text search function, you’re forced to go through these wheels of choices to find the best possible sorting option to locate your cards. Not only does this make deck management a pain, it makes the enchanting process downright arduous. While the game’s art is of decent quality, it feels out of place on modern phones and tablets where higher resolution art and graphics can be displayed. The whole experience makes Lies of Astaroth feel dated.

Lies of Astaroth isn’t the worst mobile CCG or RPG I’ve seen, but in many ways, it’s also barely passable given the current era of mobile gaming. It has a fair cash shop and free currency is given away almost daily. The Clan Match and Dungeon modes provide great, engaging daily content to participate in, and there are regular events that add other goals to work toward. However, the rest of the game’s modes are lacking and the gameplay itself suffers from oversimplification and slow progression. With low resolution graphics and a user interface that would wear on anyone’s nerves after a few days of playing, there’s only a little about Lies of Astaroth left to love. While players looking for a very casual entry into card RPGs may enjoy LoA, I’d advise any experienced players to stay away from its murky den.