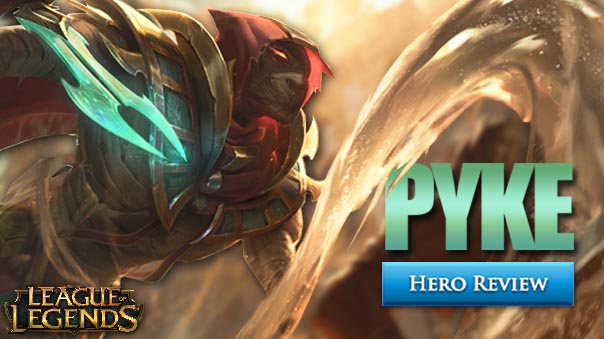 Pyke, The Bloodharbor Ripper, is the refreshingly unique combination of a traditional support champion and a bloodthirsty assassin authentically introducing a brand new way to aid the attack-damage-carry position in League of Legends.

Though there have been aggressive supports before, this is the first instance of a character built from the ground up to take kills for themselves on purpose. Now even the begrudging team punching-bag gets their chance to step into the spotlight and hyper carry their team with kills instead of just CC or vision. Pyke has a similar killing potential of high damage mid-laners, while at the same time continuing to excel at assisting their teammates with crowd control, gold income, warding, and scouting. Just remember, it’s not kill stealing, it’s kill securing – for real this time.

Somewhat unfortunately Pyke is really only fitting for the support position. While he dispatches many champions with ease, the same can’t be said for the various minions. His early jungle clear is awful due to a generally low damage output and high ability cooldowns. Similarly, he doesn’t have a great way to quickly clear lane waves either. This is of course barring the use of a Sunfire Cape or equivalent as building anything but damage is not recommended.

This is especially annoying considering he seems like a perfect fit for the jungle with his high mobility and the ability to share gold on a kill from ganks. Maybe all it would take is a numbers tweak, but I somewhat doubt it due to still being constrained by a small health pool leaving himself vulnerable to invades.

Regardless, Pyke is a brilliant partner to have in a kill lane. His ability to self heal from poke, lock down targets, and share gold on an execute is amazing in anyone’s hands.

This underwater scourge plays surprisingly straightforwardly despite the complicated mechanics in his kit and the brand new tag combination. Pyke has one primary goal: execute an enemy with the ult to double or even triple the amount of gold their team receives from a kill – they’ll want to do this has many times as they possibly can. Of course, achieving that is easier said than done. One will need to smartly and accurately use Q/E to set up takedowns for an ADC or teammate, let them do some damage, and carefully secure the execute for themselves.

Aside from needing a reasonable target to hit in the first place, by far Pyke’s greatest weakness lies in his squishiness. Worse still, it can’t be shored up by building tanky, keep in mind ALL excess HP gets a poor conversion to AD, therefore, a quick death is never not an option. Survivability lies entirely in good ability usage (passive to heal, Q to slow, W to run away, E to dash/stun, and occasionally R to blink) or good teammates to help you out. Needless to say teammates in general are fairly unreliable, and even then the time to kill on Pyke is still blindingly quick so what can they really do?

However, there’s still more to learn. Excelling on Pyke requires mastering one of the most complicated and difficult mechanics in the game: spacing. Those familiar with Tryndamere already know what this means. Essentially spacing requires the player to intimately know their champion’s limits in relation to other players and the nearby environment. For example, a Trynd in lane needs to be able to stay safe while at the same time threatening a kill nearly at all times. He does this by watching for cooldowns, moving in a way that keeps their options open, studying the opponent for patterns/opportunities to go in, other players on the minimap, and the time necessary to kill or otherwise get some poke in to set one up. All of those concepts don’t actually get into actually physically using champion skills at all, it lies in player knowledge and experience. Granted, Pyke is significantly less punishing in this regard, but it’s still important to take into account when playing him.

All this is to say is that Pyke has a deceptively high skill cap which some will find frustrating, and others delightful. He’s rather polarizing in that way. Funnily enough, I can totally empathize with ADCs rolling their eyes in champion select when they get a Pyke support despite him being a good champion to partner with because they might end up feeding tremendously.

Taking the points explained in the previous section, my thoughts on Pyke can be summed up succinctly as he’s basically an AD version of Brand. He’s low HP, has high damage, good but tricky to use crowd control, and a game turning/winning ult. The key differences are in a difference of damage type (AD vs. AP), Pyke being higher risk/reward, and generally being a bit squishier especially towards the late game.

By extension, Pyke is perfect for someone who wants to play support but also wants to carry at the same time. Braum is great, but when you have bad teammates there’s only so much you can do. As this support assassin however, you can solo-eliminate high value targets, snowball your teammates with gold, and control opposing hyper carries with CC while still being able to carry out vital functions such as warding relatively safely.

He’s fun, cool, and distinctly adds more desirability/expanded gameplay options for a traditionally constricted role. He’s like Rakan, but taken to the next level. While an interesting addition, I can’t say I have confidence in seeing this champion in high level play. Squishiness aside, he actually pretty easy to play around. Low ELOs will abuse the power, but something like pro play will punish the weaknesses hard and not worry so much about the gold share. True he can and probably will pop off at some point, but it’s quite an unnecessary risk to take.

I find this champion incredibly interesting even beyond being a novel concept. He’s endlessly entertaining to play and watch, but I’m also quite concerned he’ll have a low winrate, and therefore, playrate, for all time due to a few key reasons.

The most obvious sore spot for Pyke players is in not being able to buy HP, so no matter how fed one is, they will always be vulnerable. I’m actually kinda surprised this mechanic was introduced, historically items have been the traditional MOBA way of adding layers of complexity and flexibility. Not being able to build one of the most important stats in the game is suffocatingly limiting.

Next is in the Q and E being fairly easy to dodge if you’re familiar with their straightforward gameplay execution, as well as it being slow to activate in general. W is not invisibility, it’s camouflage which means it’s nigh useless up close. And while he does become invisible further away, enemies will be alerted to his general vicinity regardless because of the shark fins.

And finally, the ult is straight up clunky and not especially satisfying to use for several reasons. 1. The thin X shaped zone is unnecessary form over function, good luck hitting anything outside the center. More often than I found the opponent would not have to deliberately avoid the ability for it to miss, just let the silly hitbox do it’s thing. 2. The execute ranges are all over the place leading to inconsistency. For example a Lux’s execute range might be like half her health, but a Malphite will be a tiny sliver. It makes sense to be tied to HP, but the margins are overly massive. 3. The long delay on activation will straight up deny the gold share which is not only annoying, but takes away a vital part of Pyke’s win condition.

I believe these issues to be fairly catastrophic when it comes to breaking that A or S tier rating ceiling. More than anything though I dislike how the ult works. It seems like it should’ve been embedded in his ult passive or something similar so you never miss out, instead you’re forced to roll the dice on whether or not your ult will hit, execute, or be too late entirely.

“I look down on the world from the bottom of the sea.”

Pyke is a rad blend of two distinct roles featuring incredible visuals, fresh mechanics, and a brilliant new way to play a classically boring position. Admittedly I got a bit scared after the Kai’Sa release thinking the champion development team had jumped ship, but Pyke is a stellar return to form.

I seriously doubt Pyke will create waves over the coming months, but at the very least he’s a fantastic new option and gameplay style for more carry-minded support players and I look forward to adding this somewhat clunky, yet stylish Zed of the bot-laner to my go to lineup.