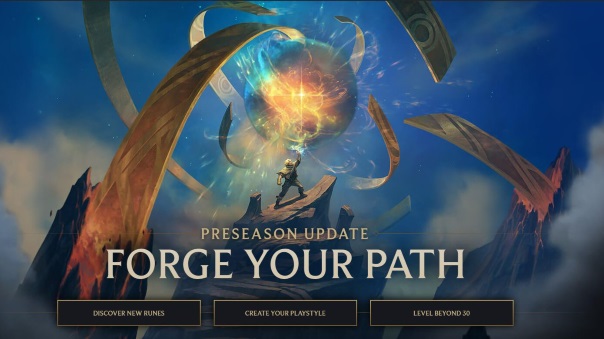 November marks the end of the current League of Legends season. In the past few years, we’ve seen changes to a host of characters from mid-to-end season. There are a few major changes coming to League and range from “necessary” to “pretty neat”. One of the design flaws held by League of Legends is the notion of purchasing Runes. Anytime over the years, I’ve played and a new person asked me what they should do, my answer was always the same, “Ignore level 1 and 2 runes. Save your IP, figure out what role you want to play, and buy only the Runes for that. That way you won’t be at a major disadvantage for such a long time after hitting 30.”  I would tell them further to wait until at least 21 to start getting your Runes. It was backward, dreadful, and more than a little annoying. For a system that’s so important to the game, having those early-game stats, it was frustrating, to say the least. To their credit, you couldn’t buy them with RP at least. While not “important” but definitely on the “neat” end of the spectrum, the Level Cap is going away. It happened to Heroes of the Storm, it happened in SMITE, Paladins, and now it’s happening in League of Legends. The final, quality-of-life change is removing IP (Influence Points) and merging them with the system of Essence, and purchases that were done with IP will now be done with Essence. However, today I’m just going to focus on the major game change that are Runes.

We’ve seen a few changes to Mastery, but Runes have stayed virtually the same ever since their inception. It was tedious, taxing and vexing. Having to farm match after match to buy Runes, two of the levels of them being basically worthless … it’s about damn time. So instead of having 30 slots and having to farm them with IP with menial, minor effects, these will be about eight that you equip from a series of styles and will have a pretty large amount of weight behind them. The idea is to “customize your playstyle” There are now five paths, and each has their own set of Runes and abilities that go along with them.  From throwing meteorites, gaining more healing power, being able to smash turrets, the way you build your Rune page will give your playstyle new life. You’ll pick a Primary Path and a Secondary Path, four runes from the primary and two from the secondary. The primary path will have a Keystone (The most powerful rune), a greater, two regular runes, and the Secondary path will contain two splash perks. This creates a ton of customization and potential to create ridiculous trees filled to the brim with power. And Rune Pages will go away, being refunded whether you spent IP or RP on them. IP will award Essence, and for every 4 pages you bought with RP, you’ll get an Epic Skin for a character you own. So, that’s a pretty neat buff. I’ll go over each path, though please note that these can and probably will change as the pre-season/next-season actually happens. Please note these are not pro builds or plans. These are just skills I think are interesting. These do feel like each are aimed at a playstyle/role, but you can mix it up if you’d like. Nothing stopping you! 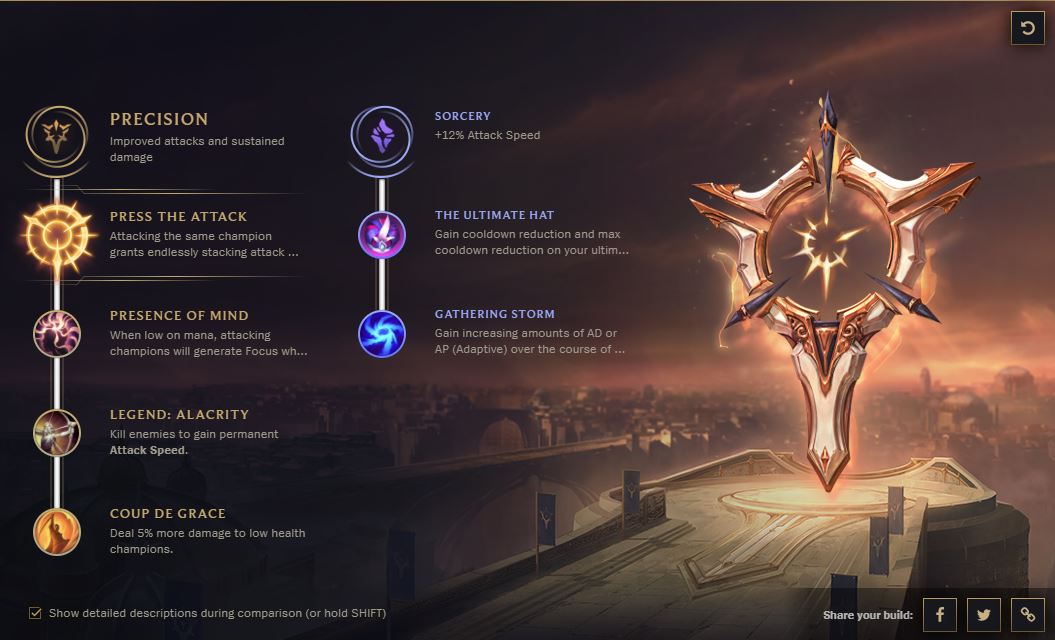 More than Hunters can use this tree.

Precision: Sustained Damage/Improved Attacks (Hunter):  This one’s pretty self-explanatory. All three of their Keystones are powerful, but personally I think my favorite is Lethal Tempo, which can let you break the Attack Speed limit temporarily, has a 6 second cooldown, and 1.5 seconds after damaging a champion, you gain 30-50% attack speed, and attacking a champion extends the effect to 6 seconds (initially it’s 3). Then I’d consider Presence of Mind, which while it doesn’t add any raw stats or damage, it builds focus while under 60% mana (and for an attack character, this is basically all the time), and when you leave combat, it will grant you mana. Very useful for staying in the fight and farming. The Legends for the next trait are dependent on gaining points, for getting kills, monster takedowns, large monster kills, and minion kills. Alacrity (AS) is probably the most useful. The final three are good, but I’d go with Coup de Grace which gives 5% extra damage to enemies below 40%, making kill securing a bit easier.  Interesting Pairs: Domination, Sorcerery, Inspiration. 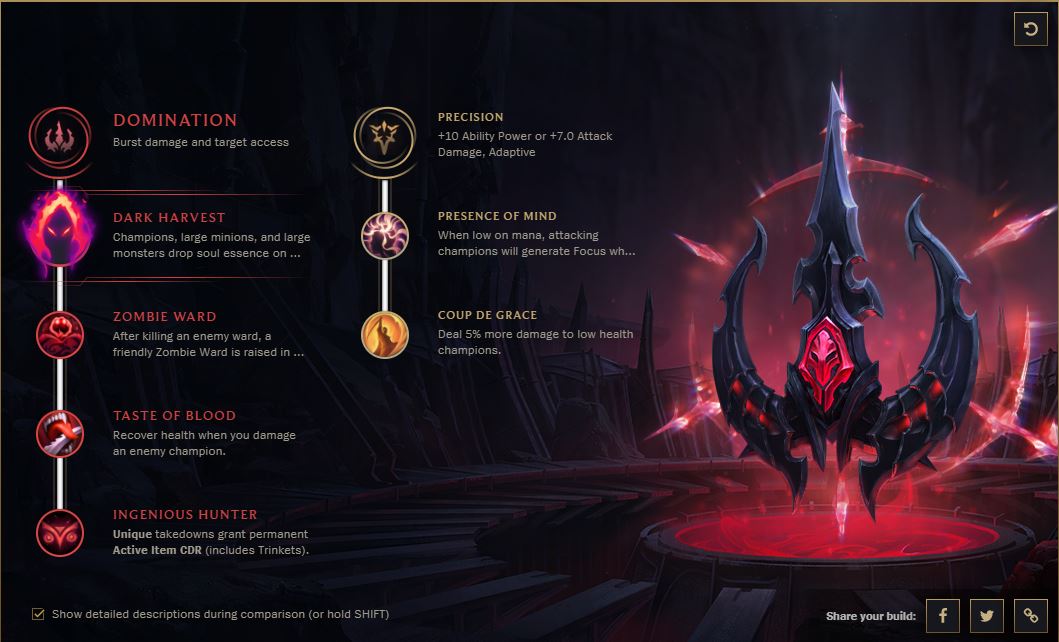 Domination Burst Damage and Target Access (Jungler, Top Laner): This is all about being mobile and killing people pretty suddenly. My favorite Keystone personally is Dark Harvest, which gives bonus adaptive damage within 20 seconds after collecting souls from Champions, large minions/large monsters. So if you keep killing things quickly, this number can get higher and higher, and all of a sudden, you leap out of a bush, and mangle someone! The current bonus damage is 60-100(+.15 bonus ad)(.1 AP) + soul essence collected.  Champs grant 10, Monsters grant 2, Minions grant 5. Eyeball Collection comes next because it offers permanent Attack Damage, Adaptive permanently based on champion takedowns and half that on ward takedowns. It promotes ward clearing, and it’s 2 AP and 1.4 AD. It isn’t gigantic, but it definitely helps. From there, I pick Cheap Shot, because damaging champions with impaired movement/actions gives 12-30 bonus True Damage (based on level) and only has a 4 second CD. And I loooove True Damage. Ingenious Hunter gives 1% Active Item CDR plus an additional 6% per “Bounty Hunter” stack. You gain those the first time you kill a takedown on an enemy champion. 5% active item CDR helps, and it counts for trinkets too. Interesting Pairs: Precision, Resolve, Sorcery, Inspiration. 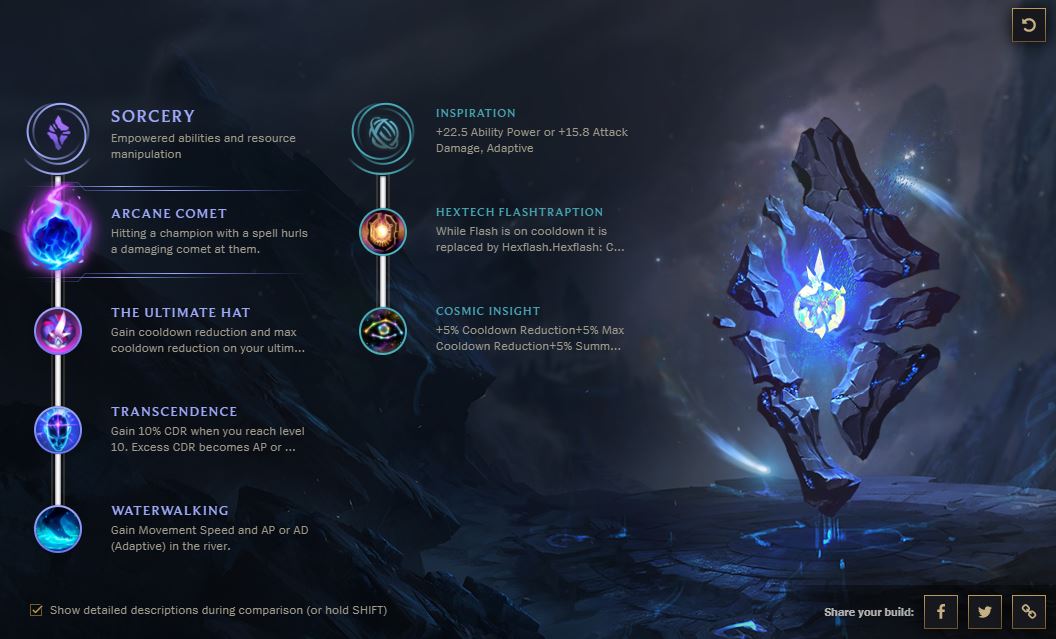 Sorcerery: Empowered Abilities and Resource Management (Mid-Laner/Casters): I’m torn between Summon Aerie and Arcane Comet. Summon Aerie is more for bot-lane casters, Arcane Comet for mid-laner/damage roles (I guess that could also be bot lane … ). Arcane Comet fires comets at the location of a champion you damaged at, and Aerie it summons a spirit to deal damage to your targets or shield allies when you use abilities. It can be incredibly helpful all around. My next pick is probably The Ultimate Hat, which rewards Ultimate usage. Your ultimate CD is lowered by 5%, and each time your Ultimate goes on CD, you gain another 5%, up to 20%. Absolute Focus grants up to 40 AP or 28 AD, adaptive (based on level) while you’re above 70% health. So it rewards your safe play with more damage for pokes. My final pick is for when you’re holding out for the late game: Gathering Storm. It grants AP or AD based on how much time has passed. Every ten minutes you gain more. At 60 min, for example, you receive 168 AP/ 126 AD. It’s definitely worth it. Interesting Pairs: Domination, Resolve, Inspiration. 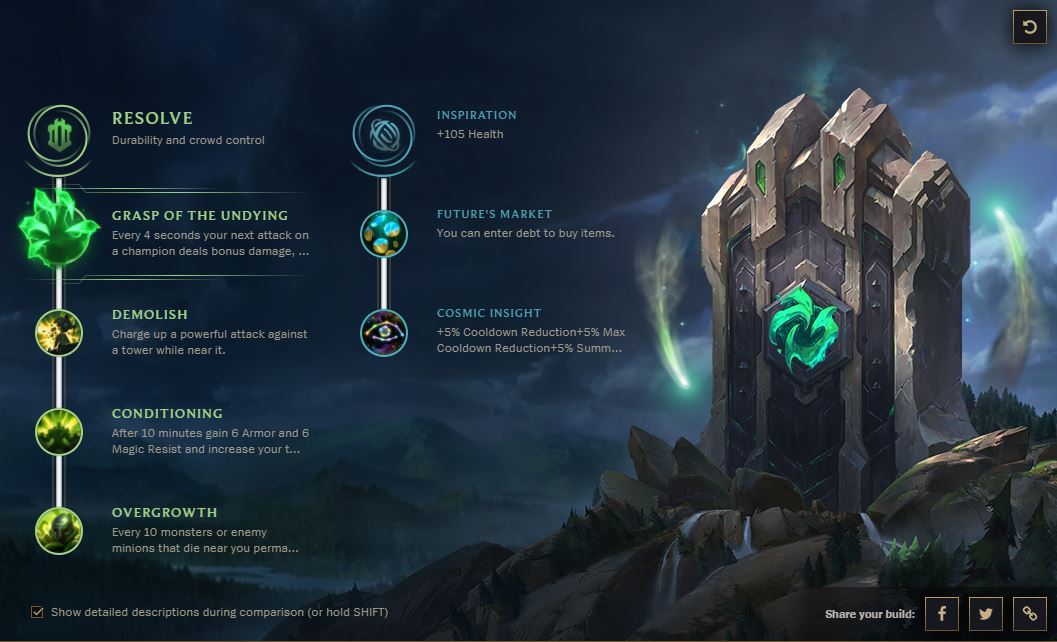 This is my favorite tree.

Resolve: Durability and Crowd Control (Tanking/Support/Top Lane): All three Keystones are pretty great here in my opinion, but based on how aggressive I am as a tank, I’m leaning more towards Grasp of the Undying.  Every 4 seconds in combat, your next basic attack on a Champion will deal bonus damage equal to 3% of your Max health, heal for 1.5% of your max health, and permanently increase your health by 5. It doesn’t have a cap that I see. Ranged Champs the damage/healing is halved and only gain 2 permanent health. Guardian is fantastic for the ability to shield an ally on a 45-second cooldown. Only a 6-second cooldown if the shield doesn’t activate. Demolish is my next choice, which charges up a powerful attack against a tower over 4 seconds, while within 600 units of it. It deals 375 (+20% of your max health) bonus physical damage. I do love pushing lanes down. Conditioning grants 6 armor and 6 Magic Resist and incrases your total Armor/Magic Resist by 5% after 10 minutes. That second bonus I feel is only really great if you’re winning and have bought an item or two. Overgrowth’s potential is dependent on your team’s ability to kill. Every 10 monsters/minions that die near you (1400 units!) you permanently increase your max health by .2%. Not much at the start, but the longer the game goes? No question. Interesting Pairs: Inspiration, Sorcery. 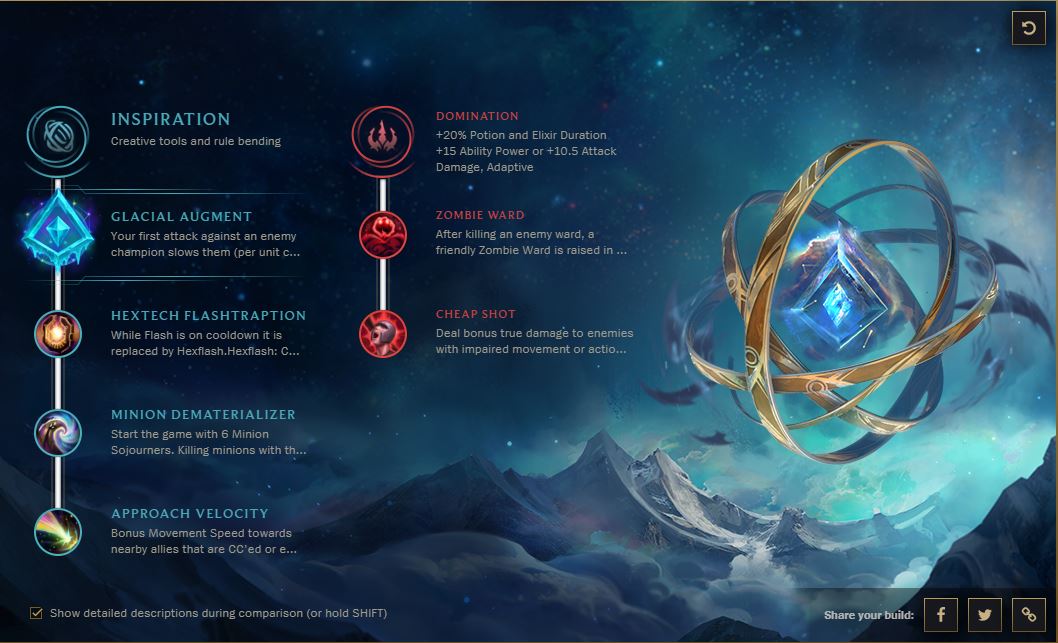 This is the wackiest tree. Dunno if I'd ever use it as a Primary. Hell of a secondary though.

Inspiration: Creative Tools and Rule Bending (Anyone, Top Lane): This is such a weird tree, but it can really be used by anyone. It offers a lot of ways to change the game. The first three aren’t all revealed, but Glacial Augment‘s ability to slow from Basic Attacks is fantastic. The slow gets better over its duration. The 2 second slow is nothing to sneeze at, and the slow is better at melee range than ranged, obviously. Slowing a champ with active items shoots a freeze ray through them, freezing the nearby ground for 5 seconds and slowing all within by 50% (max of 3 rays per item use). Hextech Flashtraption gives you a Flash while Flash is on cooldown. It is replaced with Hexflash while on CD. You channel for 2.5 seconds to blink to a new location. It has a 20 second CD but goes on 10 second when you enter champion combat. The next slot is kind of weird. Minion Dematerializer kills a group of minions/absorbs them and gives you permanent +4%  against that minion type, and an extra 1% for each additional minion of that type that’s absorbed (and you start with 6 of these items). For champs that have a hard time farming, it will help. But personally? Future’s Market is for people that are behind. You can enter debt to buy items and the amount you can borrow increases over time. The debt limit is 150 + 5/minute, and the lending fee is 50 gold per item. It can be the key to put you back into the game, at a cost. Cosmic Insight offers 5% of: CDR, Max CDR, Summoner Spell CDR, and Item CDR. That’s a lot of cooldown reduction all around.  Interesting Pairs: Pretty much anything. 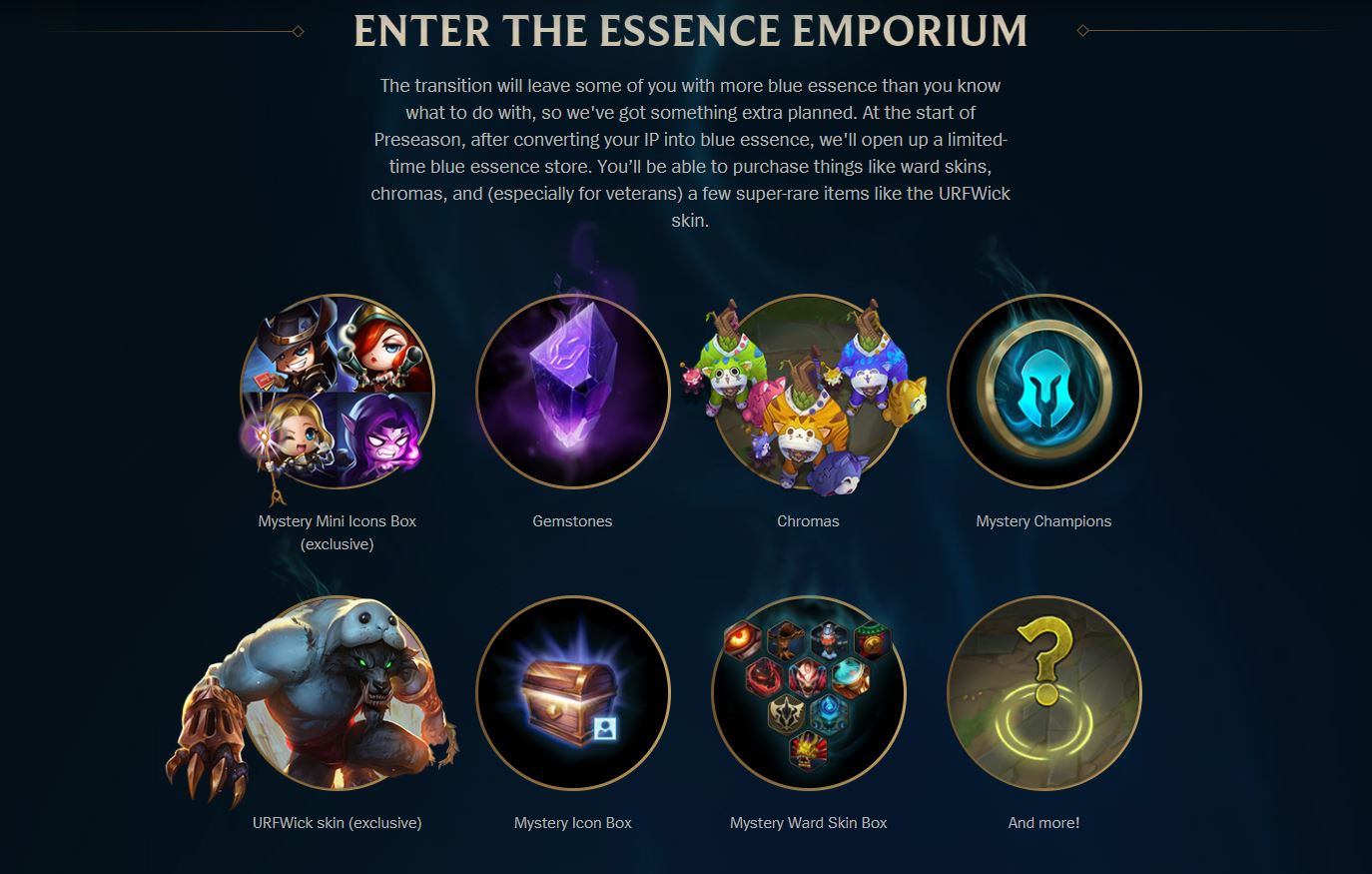 You can unlock some pretty cool stuff, admittedly.

The removal of the Level Cap, replacing the IP grind with a rewards system, and gaining a chest every-time you level up that gives champ shards, essence, and at certain levels, gemstones/rare emotes … it sounds very familiar. I can’t help but feel I’ve seen it before. But I do like it being added to the game. You can do more with the Essence, like acquiring rare things, for those folks who are going to have too much Essence, thanks to long hours of play. I didn’t go into every combination and potentially incredible setups, but there’s so much more strategy coming to the game. There will be some balance for every champion in the game for this new system, probably to make some of these combos be less “insanely overpowered”. It all goes live on November 8th! What are your thoughts on the update? Let us know below!