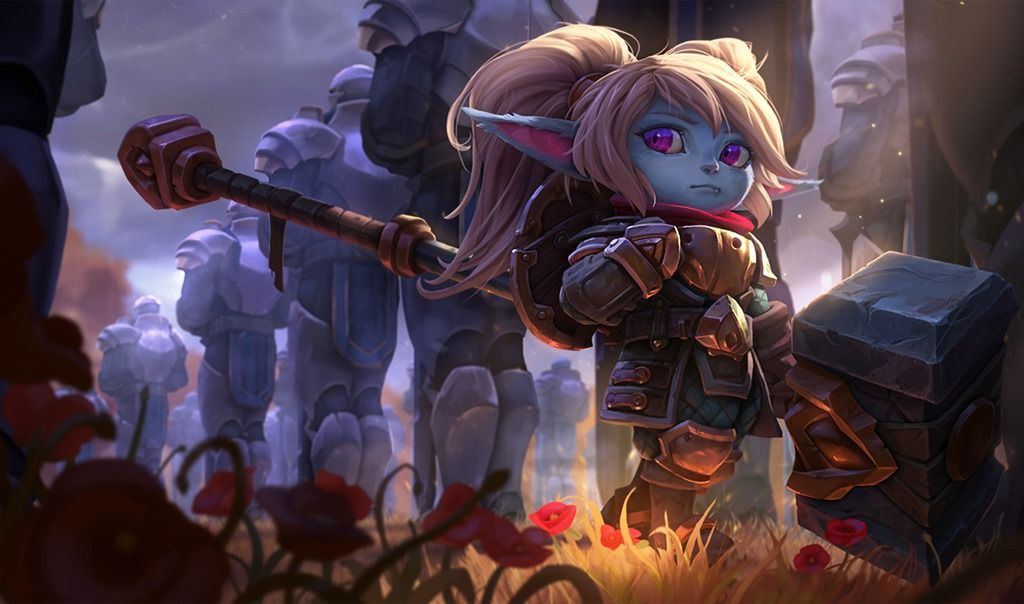 It’s December, which means it’s Snowdown season in League of Legends! Legend of the Poro King is back, during the holiday season (Dec. 24th-Jan. 7th or thereabouts) if you buy a legendary skin you’ll get another skin for free with it! That’s cool right? Right? Lots of Christmas skins are coming back for a limited time, so it’s your chance to get those as well. 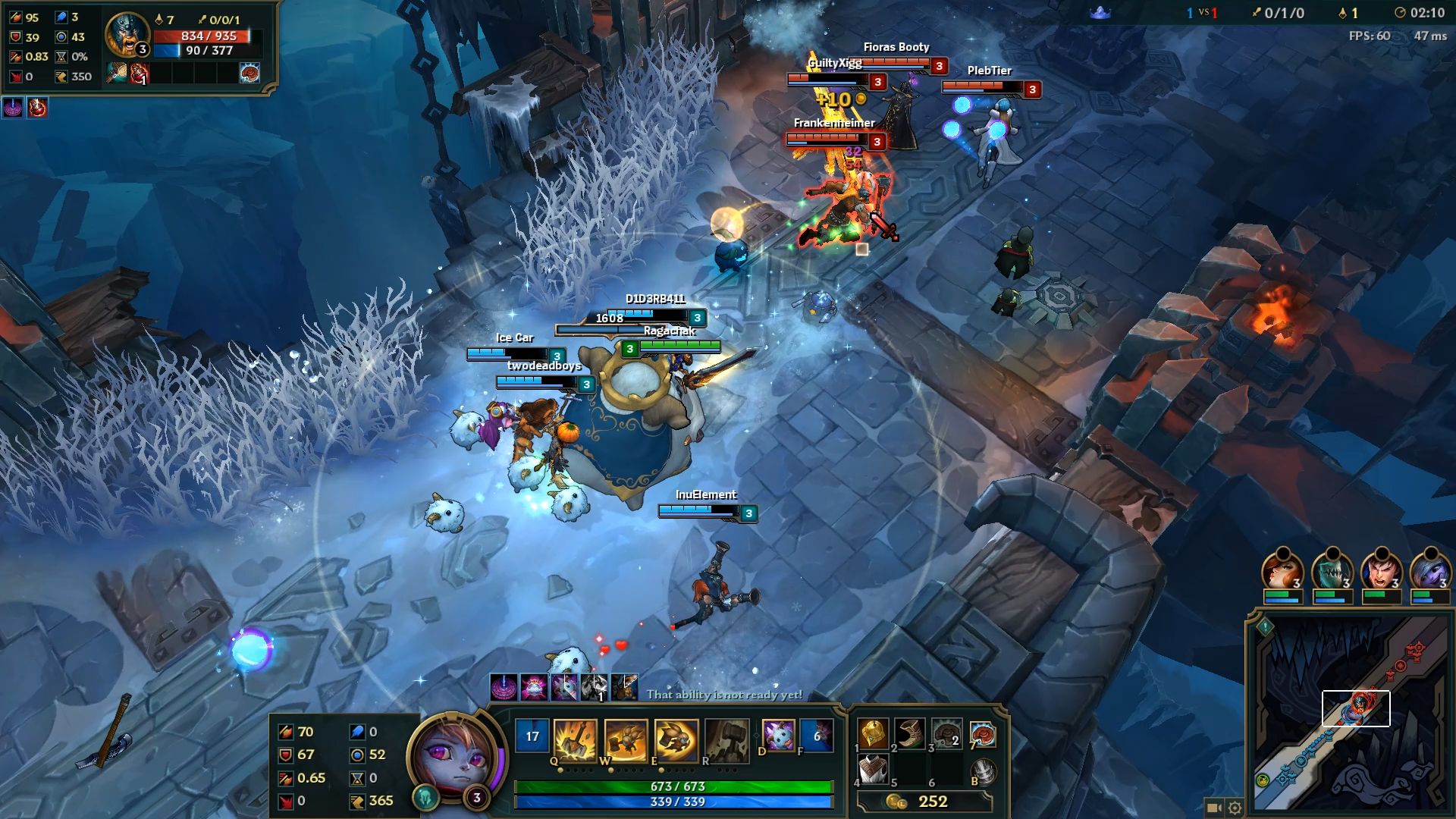 The King has Returned.

But more important than that is that Poppy Skins are out of the Vault got her rework finally! What’s the verdict? Honestly, I freakin’ miss her old Ultimate. Though there’s a lot to be said for knocking the enemy jungler/tank into left field, towards their base. While her kit is really good, it’s those that can properly utilize her W and R that will separate the good Poppy players from the great Poppy players. There are lots of people who miss old Poppy, because she wasn’t honestly bad. . . but she wasn’t “relevant” either. And that’s a pretty key word for League of Legends. Being relevant makes you played, makes you discussed, sometimes banned. I do not feel that Poppy’s going to show up and change the entire game, but she definitely has the feeling of being someone relevant for the first time in seasons. From niche to a key component of a specialty comp.

But now, Poppy and her hammer are ready for action! The Iron Ambassador is a Fighter/Tank, and I prefer to employ a fairly aggressive rune/mastery mix. My masteries are pretty standard AD style character: Lifesteal Quints, Attack Damage Reds, Armor Yellows and MR Blues. I’ve also opted to run my tank page from time to time that has Health Quints instead, if I feel like I might have a rough time. My runes are 18/0/12, giving me a healthy balance of aggressive attack speed/damage boosts with the tankiness of the resolve page. 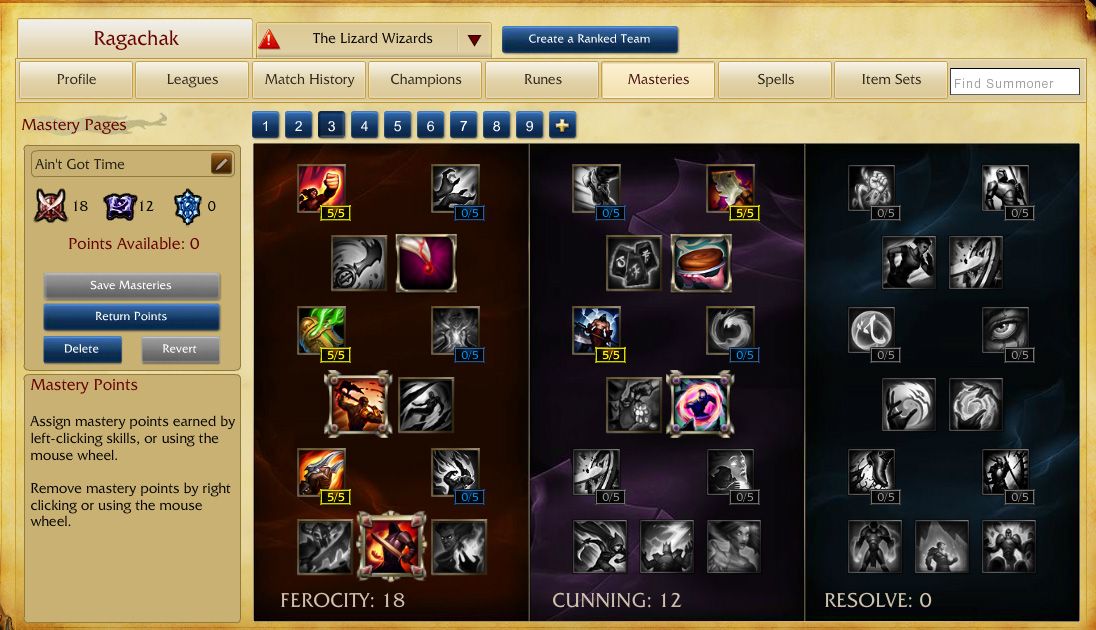 I bring the pain and utility with masteries, while itemizing more defensively.

I don’t really build a lot of damage items on her though; her Q takes care of a lot of the damage if it hits, so I do go for a Black Cleaver, then follow up with a variety of tank items: Sunfire Cape, Iceborn Gauntlet, Randuin’s Omen, things of that nature. When I dash to them, I don’t want them to have the illusion that they’re getting away!

My runes don't change much between top lane bruisers.

Poppy’s kit is considerably different from before. Her old passive, Valiant Fighter, is now “Iron Ambassador.” Now she uses her buckler in combat. When the cooldown is up, her next auto attack is ranged (and deals bonus magic damage), and the shield gets tossed to the side somewhere nearby. If it’s picked up she gets a shield to soak a little bit of damage. Her old passive was kind of neat, and was fantastic for taking damage, but it was bland. If the passive gets a kill, the shield returns, a’la Captain America, and she still gets the damage soaking. Devastating Blow is now Hammer Shock. It’s still her primary damage, and it is capable of pretty fantastic damage, as it deals percentage damage based on the enemy’s maximum health. In addition, it creates a slow, and explodes again for the damage it initially dealt. The range on it is pretty awful, but careful use of it can decimate anyone. 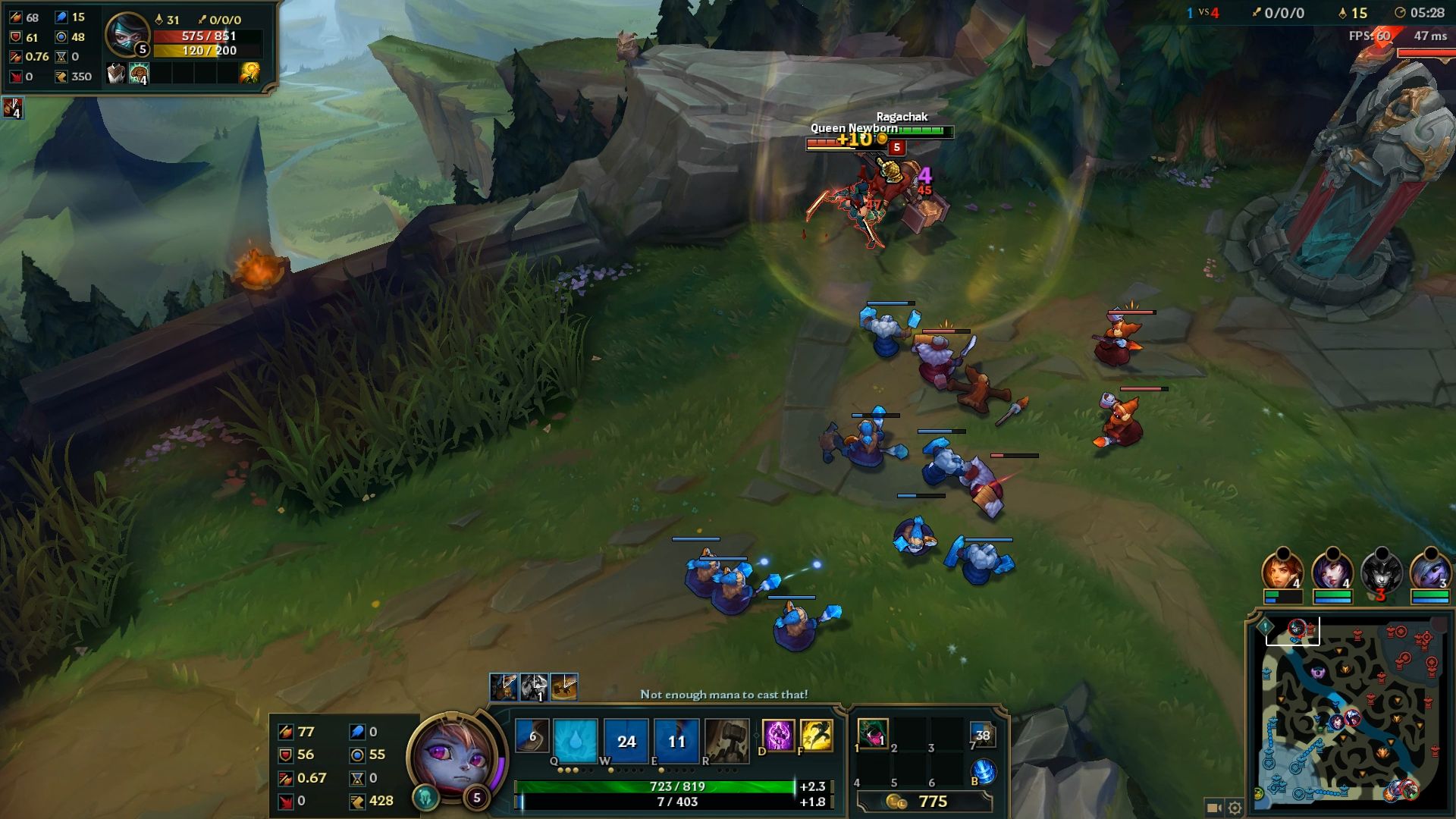 Poppy will pin you up on the wall if you drop your guard.

Her E, Heroic Charge is still the same aggravating bullshit it was from the start. Charge people into things, stun them, and hurt them as much as you can. That never gets old. Catching her in the jungle is a very bad idea. Honestly, I think Poppy Jungle is probably better than ever before. Her Q does a little less damage to minions (80% of normal damage), but her W and R can definitely knock the support far away, prevent the target from dashing away, and seal their doom! Her targets receive justice of the Hammer, whether they want it or not. 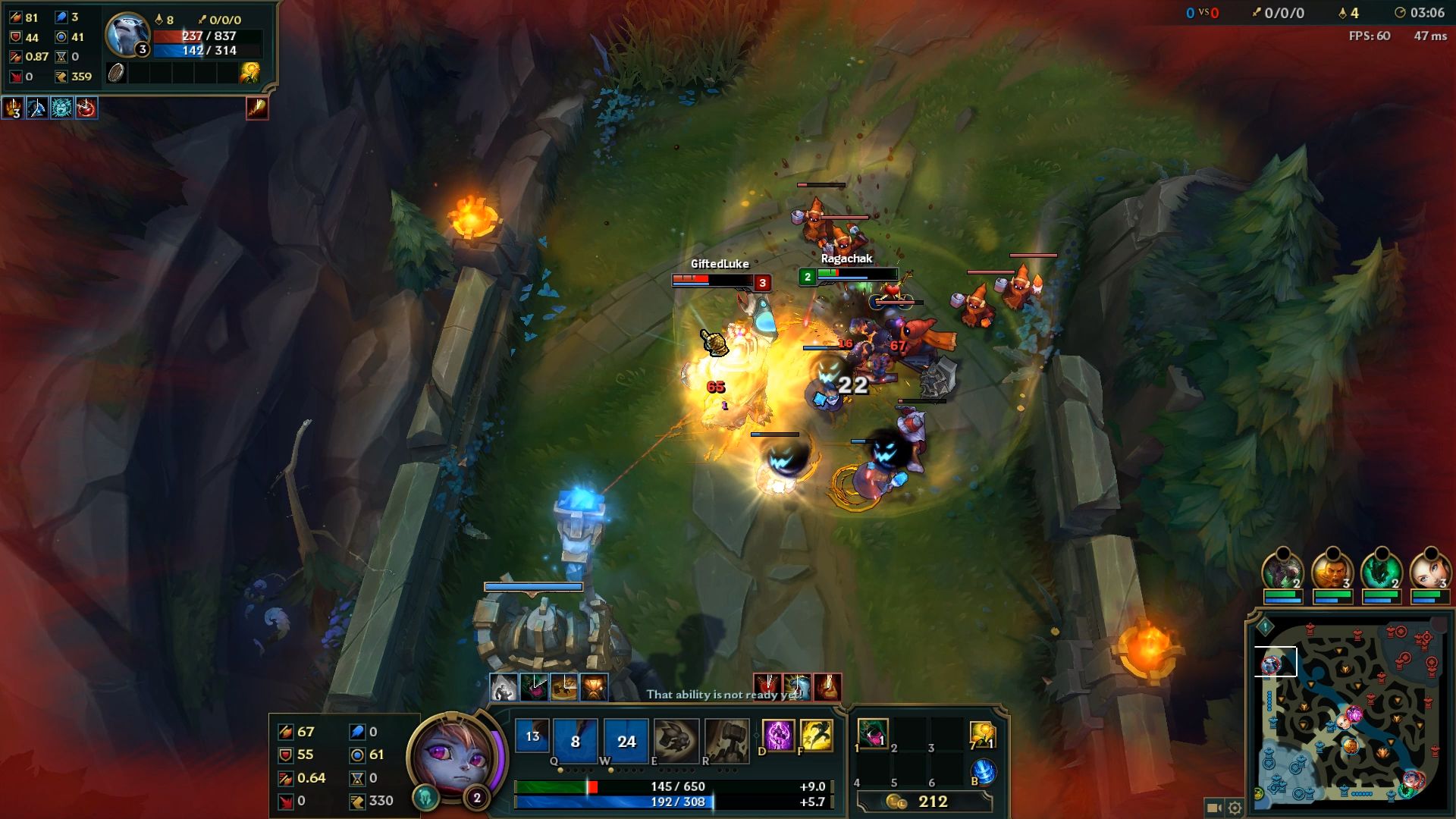 Tower dive and jump away? Not on my watch.

But where her kit really stands out now is in “Steadfast Presence” and “Keeper’s Verdict.” Steadfast Presence gives passive Armor/MR, 12% of her current numbers. This is awesome to make her tanky. But…when she activates it, an Aura appears around her. She gains Movement Speed for 2.5 seconds, and anyone who dashes at the aura gets knocked away from her. Not far, just a centimeter away. If you are “in” the aura, you cannot dash away. Any top laner that has a dash, leap, or pounce will find this inhumanly frustrating. Akali can still double dash and get to her after it wears off, as can other champions with that style of ability, but far and away it can be used to stop a huge amount of characters. She can use the mobility increase to run forward and block ults, dashes and ganks, knocking them away with Keeper’s Verdict. She charges up her Hammer, and knocks whomever is hit by it away, making them briefly untargetable. It sends them in the direction of their base, no matter which way they are facing. I knocked someone towards my base and it just hurled them in the other direction. This can be amazing, as it does damage; but if you don’t do enough, your entire team is going to rage because all you did was send their target to safety. [I should know. I did that more than I’d care to admit] 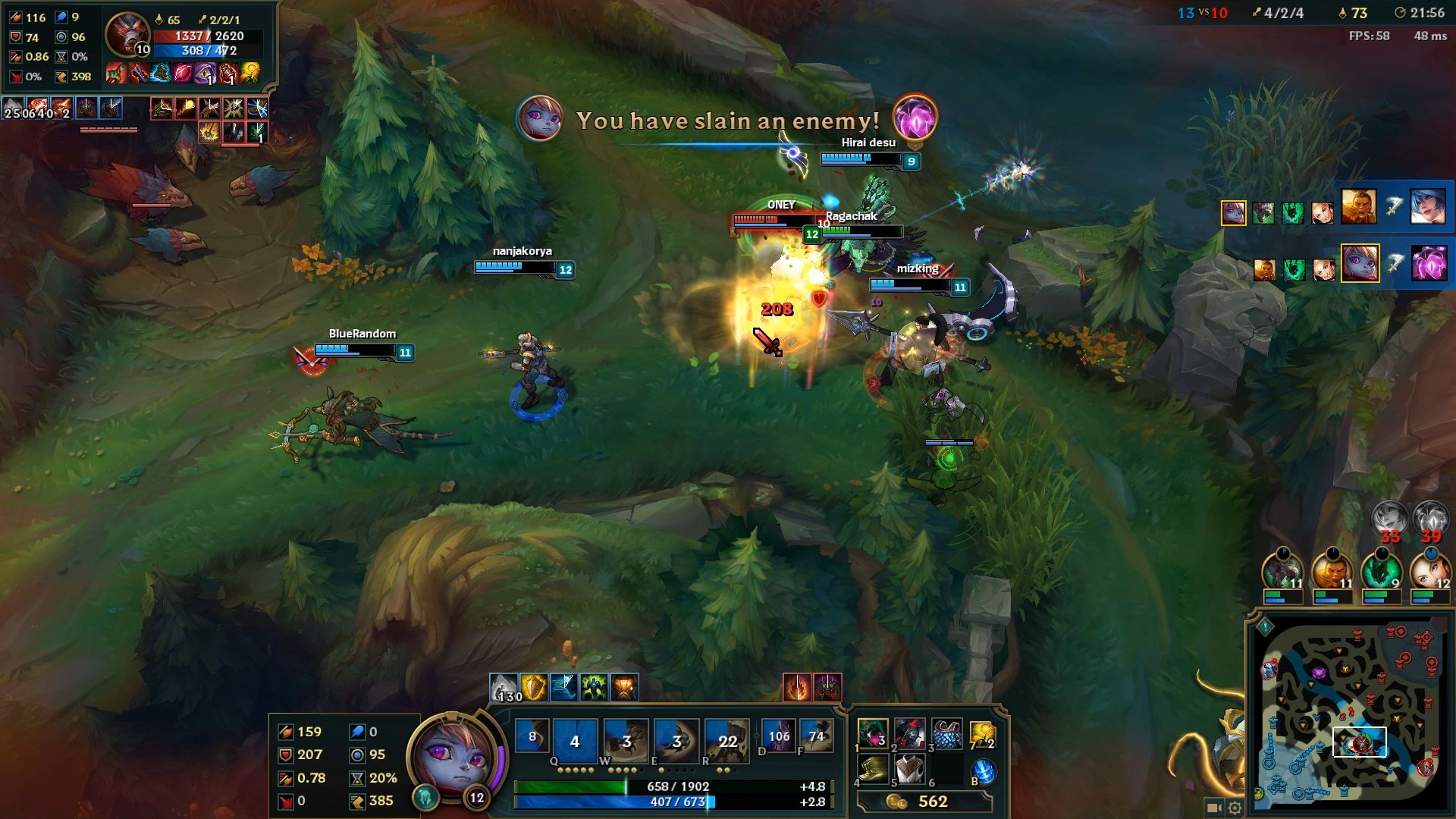 In Teamfights, Poppy shines. She can pop W to stop junglers/carries from getting to the backline, and knock the most fed person/most useful person away from the teamfight to get the fight into a more agreeable fashion for your team. She can still knock people away and stun them, still doing the same incredible damage, but her kit requires more thought to use than it did before. It’s more than “Ult the person I want to ruin.” Most people who have dashes/leaps have to exercise caution around her, but people who can still get in like Volibear or Singed, with their flips, are still an issue. Anyone who deals true damage (Irelia) is a threat, because no amount of armor/mr will save them. Cho’gath should also do well against her for that same reason. Once he has a stack or two, that Q won’t get close, thanks to his knock up and silence. As an aside, I hate that she has the same voice as Tristana. Love the voice actress, hate that they sound the same. That bothers me a great deal. Way to be lazy, Riot. Poppy is terrific fun though and I anticipate seeing a lot more of the Yordle with the Hammer.

Get that shit out of here!