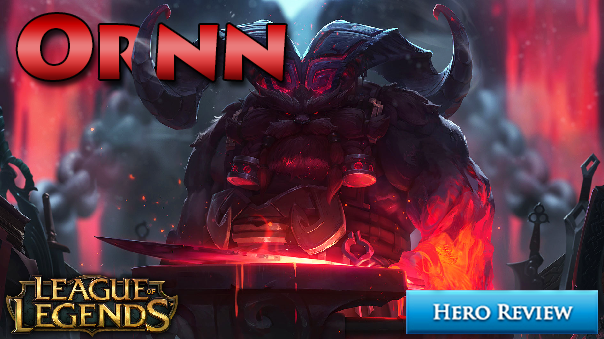 Ornn, the Fire Below the Mountain, is the latest champion release from League of Legends and is by far the raddest ram around.

This stout old metalworker is a touch slow to traverse the map, but more than makes up for it with his devastating fire breath, massive guardian spirit, trusty hammer, and the ability to make items anywhere on the map. His time is now, strike while the iron is hot!

Living Forge: Buy any item -except consumables- anywhere on the map after a short channel.
Master Craftsmen: You and your teammates can choose to upgrade an item past it’s usual threshold.

Send out a damaging and slowing skillshot a moderate distance ahead. At the end point, a small piece of terrain will show up for a short time.

Become unstoppable, gain a small shield, and belch out damaging flames in a cone ahead of yourself. Enemies hit by the final tick will become brittle.

Dash forward damaging any enemies in the way. Should you collide with terrain, knockup all nearby enemies.

Become a Living Forge and craft items like Warmog’s on the fly!

+Can Be Flexed in Several Roles

Ornn can actually be flexed pretty proficiently in 3 positions: top, jungle, and support. The idea is that he’s not actually that great in any of those roles, but he will be able guarantee a certain level of reliable output. It may not mean much in typical ladder play, but for a competitive team it can be a safe champion to fall back on. Still, the meta’s not so friendly for him; at best I can see him as a support where he can abuse buying items in lane and otherwise provide some pretty good CC in teamfights.

While Ornn does have some complexity, namely behind his ultimate, he’s very straightforward to play. Q and W are very reminiscent of other abilities, and E’s a simple dash. R gets a bit tricky since it can be redirected but all in all it nothing too difficult. That is both a boon and a pretty big drawback in a rather oblique way. Sure it’s fairly easy to get value out of your plays, but they can be played around without too much trouble. At the same time, the average worth of carrying out a play is fairly limited compared to the ceiling of what you can hope to achieve. In other words, he often requires too many resources -whether that be in items, time to get going, or player skill- to actually be worth playing over similar picks.

At this point in time it’s obvious Riot has some experience balancing champions, so where did the power he was supposed to get go to? That lies in his utility with the item upgrade/buy anywhere. But how much is that worth? Does it make up for what’s being left behind? My short answer is no.

League of Legends has been out for a very long time, and because of that we’ve had years of players seeking perfection and developing certain habits, one of which is in the back timings. It’s not only accounted for but expected to back to base at certain times where you won’t be punished. Also, going back to base isn’t just to buy, it’s also used to heal and possibly take a different route back onto the map. So when you hear that you can purchase items anywhere, that seems initially powerful, but in reality it often won’t make much of a difference. Additionally, this potential power is really only noticeable at the highest level of play where even a tiny amount of stats can sway the game at the right time.

The other half of his passive effectively raises your gold cap at the endgame, but again, won’t be noticeable except in rare situations. When’s the last time you played or watched a game that had even 2 players on the same team get 6 completed items? Even at an extreme late game, the actually advantage we’re talking about is minimal compared to things like team composition, players skill, and shotcalling. So effectively, while this utility is unique it doesn’t even come close to making up for the shortfalls in the rest of his kit.

In reality, what’s really cool about Ornn isn’t the champion, but the mechanic he introduces: brittle. Brittle basically makes crowd control more effective, which in my opinion is a good thing. While Ornn may see play with only this in mind for a while, I am more excited about the next wave of champion/reworks that could add additional brittle effects.

All said and done he can always be a decent pick for team compositions that look to skirmish frequently with his relatively low cooldowns, decent damage over time, and wide crowd control that can hit multiple enemies multiple times. And luckily for him, in this day and age of 5 bans per team, he actually has a chance to see play whereas only a while ago he would’ve been absolute garbage.

Ornn is painfully average. Maybe a bit on the higher side in some cases like in extended team fights, bit lower in nearly every other aspect, but overall pretty basic. He’s the kind of champion that has very stable expected value. Whether you are up against him or with him, you can expect pretty consistent results. Sure he can pull off a rad ult every now and then but it’s nowhere near the level of the likes of Malphite or Gnar, and by extension his base kit is lacking in raw power. In fact, I’m most taken aback because it’s been such a long time since we’ve had such a middle of the pack kind of champ.

As far as his predicted usage, I’m guessing he’ll make the odd pick or two in competitive but otherwise will be largely overlooked in SoloQ.  While professional teams could get substantial value out of his passive, a group of random players will not so his pick rate will probably be one of the lowest. Which makes me kind of sad because I think Riot knocked it out of the park with his visual design.

Anyway, Ornn will soon fade into obscurity with his neat passive, and before long new champions will have the coveted brittle mechanic him that much more useless. I’m finding it difficult to even imagine someone wanting to try and make him work since he’s just flat out boring to play.

He will never be the focus of highlight reels or see major picks or bans, but he can always be that reliable pick in your time of need, otherwise time will move on and Ornn will just be known as that dude with a unique passive and nothing more.