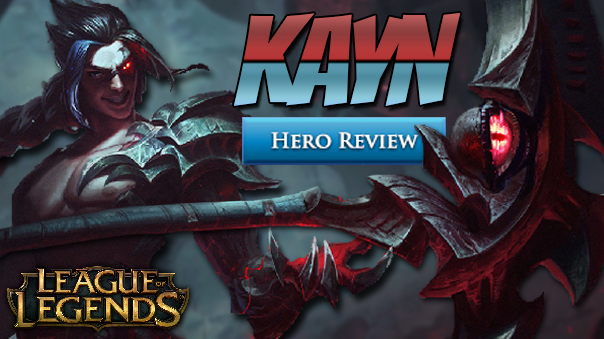 League of Legends players, get ready for Yasuo 2.0. You know the type, that kind of champion that’s always trash on your team but a 1v5’ing god on the enemy’s.

With high mobility, fantastic split-pushing, a knock up, and parody levels of edginess it’s easy to see the similarities, however Kayn is more than meets the eye. In actuality, his scythe is a sentient creature hell-bent on conquering its host and destroying Runeterra. Will Kayn be able to control the ancient demon to become a bloodthirsty assassin, or will he be devoured and become the nigh-unkillable Darkin Raast?

Abilities
Passive: The Darkin Scythe
Damaging enemy champions fills up a meter, when completely filled you can transform into either the tanky Rhaast or the high damage Shadow Assassin depending on what kind of champion you damaged most (melee/ranged respectively).
Raast Passive: Heal for a percentage of spell damage dealt to enemy champions.
Shadow Assassin Passive: Deal bonus magic damage during the first few seconds of combat with enemy champions.
Q: Reaping Slash
Dash a short distance dealing damage to all nearby enemies.
Darkin Passive: Bonus percent-health damage against non-minion enemies.
W: Blade’s Reach
Deal damage and slow all enemies in a line.
Shadow Assassin Passive: Increase the range and gain the ability to move immediately after casting.
Darkin Passive: Briefly knock up caught enemies.
E: Shadow Step
Gain a short burst of movement speed and the ability to move through walls. The duration lasts 1.5 seconds as is, and when not in combat can be extended up to 5 seconds if actively moving through terrain. Additionally, heal for a small amount if moved through terrain.
Shadow Assassin Passive: Additional movement speed and immune to slows during the duration.
R: Umbral Trespass
Teleport to a nearby enemy champion you recently damaged and become briefly untargetable, at the end of the duration dash a short distance in a chosen direction and deal damage to the ult’d target.
Shadow Assassin Passive: Increased range and resets the Darkin Scythe passive.
Darkin Passive: Heals and deals extra damage based on the victim’s max HP.

Role
Due to his mobility, fast clears, and creative gank paths, Kayn should be played exclusively in the jungle. There’s some level of experimentation in lane but due to his low early damage and squishiness he doesn’t even come close to competing with what’s already in place.

As far as his place on a team he has two distinct choices: tankiness or damage. Should you choose to transform into Raast you’ll fall into a fairly average bruiser playstyle soaking up damage and peeling for a carry or generally applying heave amounts of pressure in multiple places on the map due to the quickly traversing E ability. However, because he doesn’t have engage you’re at a disadvantage in major teamfights so you’ll want to stick to quick skirmishes if possible. Somewhat similarly the Shadow Assassin form looks to splitpush and quickly rotate around the map, but instead of peeling in teamfights they’re the ones doing the killing.

Gameplay Overview
Despite the massive ability section Kayn is actually pretty simple to play, Q is the spammed damage skill, W occasionally for a slow/knockup, E to go over walls, and R to stick to your target. The tricky part comes with something called spacing, or in other words, timing your movement around enemy champions well enough to get damage in without dying.

Early jungle farming is a breeze and ganks are incredible due to the myriad of ways to approach the enemy laner and it only gets easier with either transformation.

Although, generally avoid dueling 1v1, Kayn wants to weave in and out of combat as his abilities come back up off cooldown – kind of like Fizz or Ekko in that way. Jump in, use skills, back off, and repeat. Skirmishes are fairly similar, use your abilities at the right times to get damage in without getting blown up instantly. And generally speaking avoid playing into heavy crowd control, much like a shark, if he stops moving he dies.

Long term Viability
This is actually an easy one! Kayn will never see competitive play due to his relative low damage, extremely limited crowd control, abusable early game, and poor assassination potential. Also, his one key attribute, splitpushing, isn’t even valued all that much. He just needs way too many resources both in champion picks to support him and in gold to be worth it. If he gets ahead then great! You win the game! But if he falls behind he’s incredibly useless. What good is mobility with nothing to back it up?

On the other hand he’s by far the most fun champion to play in League of Legends. His out play and carry potential is absurdly high while remaining relatively easy to play (as compared to someone like Fiora or Zed). This, in addition to how badass he looks, makes for fan favorite champion that will always see play in normals and low elos where won’t be punished as hard.

Although there is one potential future problem: currently he’s quite balanced but there’s an underlying fear that Riot might actually buff him due to community outcry. I really hope they don’t since it only takes the slightest of changes to turn a fun-niche bruiser into an unstoppable menace due to his insane mobility. Still, I doubt we’ll see anything major but it’s something to keep in mind when sifting through the patch notes.

“Will you prove worthy? Probably not.”
Kayn’s got one of the smoothest, most fun kits to play in the entire game and look kickass to boot, he won’t tear up the competitive scene but that’s okay! Pick him up, turn on some Lincoln Park, and make the traditionally dull MOBA experience into an exciting and action-packed one.