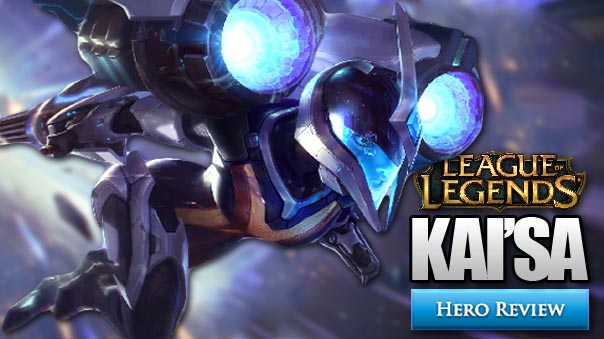 League of Legends’ latest champion release, Kai’Sa the Daughter of  the Void, is one of the most dull and unimaginative characters to grace Summoner’s Rift in a long time whilst also being notably underpowered.

While the individual mechanics are fine and the audio/visuals solid, I can’t help but feel this is a champ made entirely by picking slips of paper out of a hat. Most heroes in LoL are backed with richly saturated lore followed up with an interesting kit woven together by the hand of an expert, Kai’Sa on the other hand feels like a shoddily put together mess of differing ideas resulting in a design that screams “wouldn’t it be cool if she had this?”

-Requires a Significant Amount of Allied Help to Do Well

Oddly enough, Kai’Sa currently doesn’t have an “optimal” role. More on the specifics later, but generally speaking there is some controversy about which lane she should play. She has great ganking potential which makes for a great jungler, but has low obstacle mobility and solo survivablility so maybe not. She’s solid in the bot lane as an ADC, but has a criminally short attack range abusable by many meta ADCs, so perhaps not that either.

For now all we can do is guess, but I assume she’ll ultimately end up in the bot lane. While she can use some smart maneuvers to fend for herself in the jungle, she largely needs someone else to make up for her various shortcomings. This of course comes with caveat, is it worth it to sacrifice another player and/or a better carry in that role for a potentially strong Kai’Sa? Spoilers: no.

If I didn’t make it clear in the opening paragraph let’s state it again: Kai’Sa is basic. Every single one of her abilities, including the double passive, is exceptionally straightforward and lacking of any sort of inter-ability interaction outside of applying passive stacks. Now this seems overly critical considering how many champions can claim the exact same, point being, her skills don’t organically work together in combination with her overall design. The homing missile seeking Q doesn’t interact with Plasma and is fairly weak waveclear for a majority of the game, while “on-brand” the W is a painfully generic unguided skillshot seen dozens of times already, the E is an odd escape or engage AS steroid sending confusingly mixed signals on how its supposed to be used, and the R is just a dash with a stupidly long cooldown. It all goes beyond simplicity to a point of “this seems neat, slot it in,” without the slightest regards to why.

General kit design criticism aside, she plays exactly as you would expect. You could easily figure out exactly how she’s meant to be played just from reading the text on her abilities. The missiles are primarily for wave clear and a tiny amount of damage in team fight engagements, Void energy marks targets to dash to with R, and the charge is mostly used for catching up to or escaping a target (albeit in my experience it was used most noticeably when attempting to burst down an objective).  The whole thing is just so odd, you’re pushed to hit as many AAs as you can to stack Plasma, but the other abilities in her kit give off an AD caster/bruiser vibe. What is Kai’Sa even supposed to do? Part of the frustration stems from the fact that she’s a simple champion pretentiously masquerading as a complex one. In other words, Kai’Sa’s basic kit doesn’t lend itself well to achieving a particular goal while giving the deceptive impression that there is a high skill ceiling to shoot for.

When I first discovered Kai’Sa I felt tricked and subsequently let down because I never felt in control of my character’s personal win condition. Take for example Malphite, all you gotta do is build tanky and press R at opportune moments; with Kai’Sa however, its like, you’re juggling several weak strategies at once instead of one or two good ones. Kai’Sa is not worth your time investment to play. Pulling off the combos don’t feel satisfying, her kit is lacking the necessary traits to be successful, and, generally speaking, nothing about the way she’s put together comes close to matching the quality League of Legends has held fast to for so long.

I’ve slung a lot of hate at Kai’Sa as it is and… it’s not going to stop. What is so odd about this release in particular is that I don’t feel her place in the meta can be fixed or altered significantly by adjusting the numbers – comparatively to Ornn and Camille, namely. She’s just bad. All around. Inexcusably. Going back to her kit design, it’s like someone was designing their first champion and thought “oh boy I want her to have a good early game, but not too good, and a scaling component, but not too good; strong close quarters combat, but not melee and not too long of an AA range; a dash to catch up to wounded fleeing enemies; and sick looking homing missiles shOT LITERALLY OUT OF HER BODY. ISN’T SHE BADASS??”

The whole thing is comically juvenile and as a result will be impossible to balance. She isn’t fun to play to begin with and won’t be buffed too much due to her ridiculous snowball potential. I would say to not bet on her having a notably high play rate, nor a respectable win rate both casually and professionally. No doubt I could be wrong, I am just a relatively casual player, but from my years of playing League I don’t think I’ve ever been so blindsided by a terrible champion like this before. I expect absolutely nothing and believe Kai’Sa will be forgotten in a few weeks time save a hotfix rework of her mechanics.

Back to the Void with You

Darkness’ daughter is depressing. I can’t find anything positive to say. I don’t think the gameplay is well designed, fun, interesting, particularly visually unique, lore impactful, meta defining, or… anything really. I feel like for the longest time League of Legends has been that game where every champion release was an event, something to tune into, something to celebrate and watch, learn, and keep track of.

For for the first time in what may be years of release, I was genuinely let down by Riot Games – Kai’Sa is undoubtedly League of Legends’ worst champion release in recent memory.