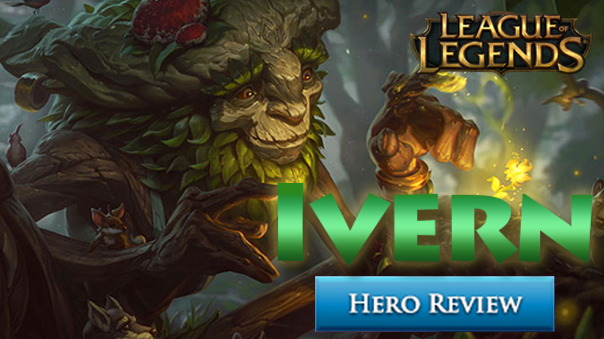 Ivern the Green Father is one of the most unique champions ever released for League of Legends, unfortunately, that’s not a good thing.

Now I know why Jungle Support was never a thing; it seems like they would go hand in hand, but at the end of the day Ivern is missing a few key elements to make the role a legitimate threat. At the same time I think he’ll be a great niche pick in certain circumstances because the skill cap is so immensely high.

Abilities
If you would like a detailed look at his kit itself, head on over to our champion preview, but the gist of it as follows.

Role
Ivern has pretty much only one role: to be a tanky utility based jungler. He can’t play support because most other supports far outclass him, and every other lane requires other prerequisites Ivern can’t fill. Additionally, he can’t go for a damage route because then he wouldn’t be able to continue pumping out helpful perks. Ivern should be the last one dead in any team fight.

Gameplay Overview
While his kit is certainly confusing, there is a fairly standard way of playing him: assist teammates as much as possible. Sounds dumb, after all that’s what everyone does, but Ivern especially. Because of his passive, he doesn’t have to waste time farming. Prep the camps and spend the rest of the time controlling vision or ganking. This is exemplified by the fact that Ivern doesn’t need a lot of income to be effective, just swing by the jungle every now and then.

Towards the mid game, both the Q and R becomes increasingly important. Q opens up for ganks or team fight engages, and R assists in skirmishes or helps takes objectives like turrets. This is where Ivern shines -short, sweet, and frequent engagements.

Late game is where he starts to fall off a bit; he doesn’t scale so all he has is the base kit – the kit that he’s had all game already. This is also where the teammate reliance really kicks in. If you’re surrounded by early game, or otherwise low damage champions, then the game is lost. It won’t matter that you kept a teammate alive a few extra seconds more if they can’t do anything with it.

Item Build
After watching and taking into account all the pro/very high elo play so far, I can come to only one conclusion: nobody knows how to build Ivern for sure. At least, there is a very clear divide from one of two builds: a full tank Cinderhulk into Locket of the Iron Solari or an off tank with Runic Echos into defense (varied also by a Runic Echos into Stinger into defense). After trying all 3 myself I wouldn’t say any of them are flat out wrong, just yet anyway.

Going full tank is great if, say, you’re partnered up with someone that you can rely on and communicate with, but generally speaking I think it’s safer to build some damage just in case. Just be careful not to play too riskily and die. Like mentioned before, Ivern needs to stay alive and casting spells as long as possible.

Level 1 Cheese: At the start of the game, if you started on the south side of the map, head to your opponent’s red buff and steal it, then head to the top lane for a killer level 2 gank. The Q + red buff almost always nets a first blood. The same could be done on the north side start, but without red it’s less good.

Long Term Viability
Ivern is a strange one, I think he has one of the highest skill ceilings, and by extension one of the most game changing outputs. However, there’s a few hurdles in the way.

Taking all that into account, my overall prediction for Ivern is this: he will not see much SoloQ play, nor will he do well win rate wise. There are far too many drawbacks for the average player while so many other junglers are exceling in this meta like Elise and Rek’Sai.

However, in competitive, and by extension very high elo play, there is a chance he is considered broken to the point of pick or ban every game. In professional play, there is a significantly higher amount of playtime, preparations, and communication, which is everything Ivern needs to excel. The only issue is that he may need too much to be worth it. Why take a chance on Ivern when, again, Elise and Rek’Sai are pretty much just as good? In short, he may hit it big, but will probably only see rare play in a surprise gimmick comp or something.

The Friend of the Forest
No other champion in my several years of playing has incited such excitement because of the all the possibilities. Ivern is such a fascinating dichotomy of simple to pick up and play, but excruciatingly difficult to master. I think in time Ivern will be a powerhouse in the right hands, but it’s going to take a long time, longer still for competitive play.

Ivern the Green Father very well may one day dictate and morph the League of Legends meta as we know it, but that day is not today.