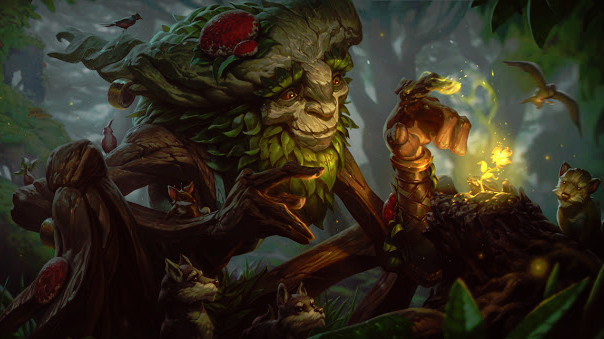 Ivern, the Green Father, is here and ready to take on one of the most unique roles in League of Legends: the jungle support.

It’s actually incredible that after so many years of champion releases, this will be the first support jungler (go away Nunu, nobody likes you). One would think those two roles go hand in hand and have the diverse champion pool reflect that. After all, junglers these days are pretty much the secondary support. They build tank, bring ample crowd control, control vision, and generally are chained to their teammates. Jungler main scorn aside, big changes are coming to the rift: Ivern’s kit is a game changer.

Lore
Interestingly, Riot Games has fleshed out an entire short story for this champion’s bio. It’s exceptionally well written, albeit a tad long. Here’s a TL:DR: basically there was this evil dude that tried to murder an old tree in his quest for power, however nature was having none of that and transformed Ivern the Cruel into the very thing he despised, the embodiment of life and nature itself. Now, a God-Willow himself, the Green Father travels, observes, learns, mediates, and teaches harmony among all things.

Abilities
While his abilities are fairly reminiscent of other champions, his overall kit is far from traditional.

Passive: Friend of the Forest

Consume HP and Mana to create a grove upon clicking on a jungle camp. After a brief delay the animals are freed from their prison thereby bestowing the gold and XP. Smite immediately frees the camp. At level 5+, Ivern can take a jungle buff for himself, and give one to a nearby teammate.

Send out a magic damage dealing skillshot that roots the first enemy champion struck. Allies can then dash to that target at the edge of their basic attack range (melee champs are placed close, ranged champs far away). Note: it’s not just one teammate per root, every nearby teammate can dash to the same target instantly.

When in brush, Ivern passively gains bonus magic damage and basic attack range. Upon ability activation, Ivern creates brush at target location. This skill works on an ammo system, meaning one could hold onto several brushes and spam them in a short amount of time.

Place a shield on an ally, after a brief delay the seed explodes dealing damage and slowing enemies.

Summon a sentinel that attacks and knocks-up enemies. Daisy can be controlled and sticks around until either her timer or HP runs out. 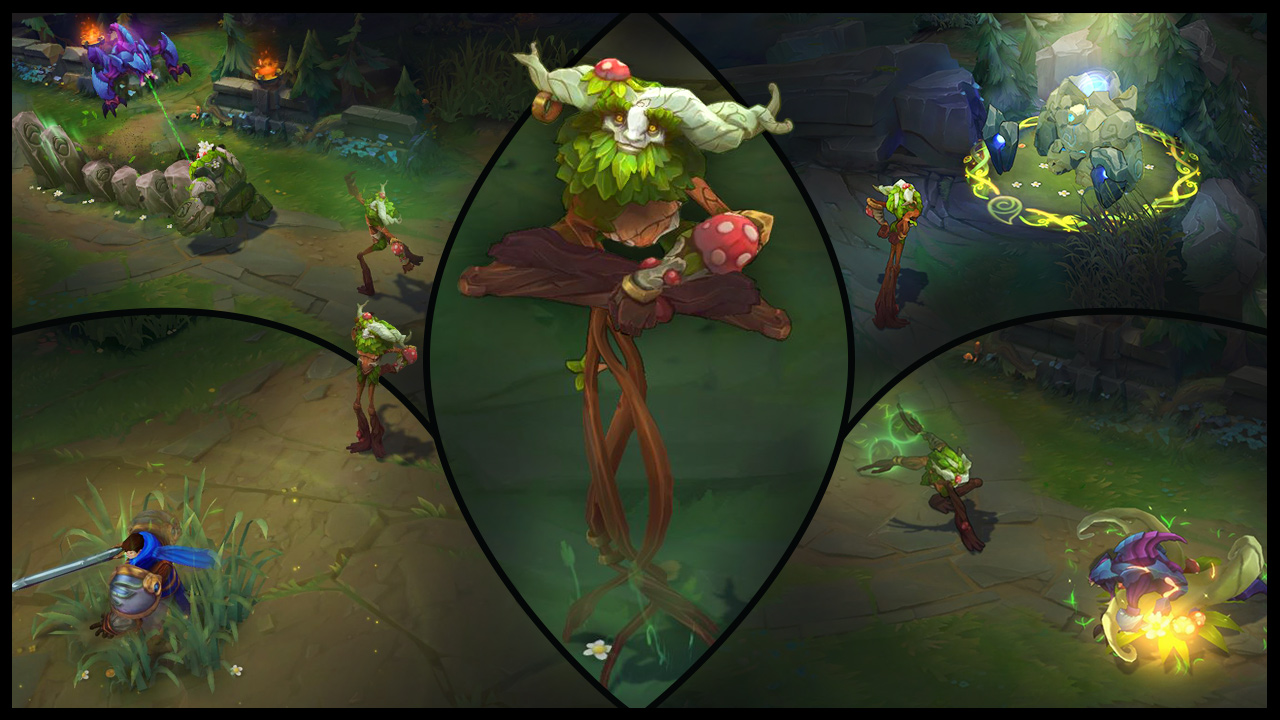 Ivern’s a weird one, no doubt. Just the passive of not fighting jungle creeps is enough to completely turn jungling on it’s head. Effectively, there’s no need to itemize for farming camps freeing up a massive amount of gold investment. He breaks the mold in a way I didn’t think possible.

Although, the pacifism only goes so far, he still must kill Drake, Baron, Rift-Herald, and regular lane minions. To make up for this, Ivern can effectively double the amount of buffs in use. When he kills a buff camp, both he and an ally get the powerful bonus. So come mid game, Ivern has blue, midlaner has blue, and Ivern has red, ADC has red, all at the same time. This may seem minor, but it’s actually incredibly powerful – broken even. Difficult to pull off effectively in SoloQ, but will most certainly make waves among coordinated play.

The ‘Q’ ability, Rootcaller, is similar. It seems like a simple movement disabling skillshot, but the second part of the skill is of great interest. Allowing all teammates to dash to a target is a full blown team fight engagement all by itself. For example, Kalista, Sivir, Malphite – just to name a few – all have powerful ultimates that gets a single person ontop of the enemy team. Ivern does the same, but with the 5 people. It’s simple math really, 5 > 1.

Even the ‘W’ skill, Brushmaker is ridiculous – and man, this champion has a lot going on. The passive basically turns his basic attack to ranged, when in brush, while keeping all the great perks of melee. While indeed neat, the real draw is the in the activation which can create brush anywhere. Just like the two previous abilities, this seems docile at first, but think of the potential! First and foremost, the theft of vision can be used in an absurd amount of ways. From not being able to target someone, tricky mind games, to giving allies like Rengar and Nidalee additional bonuses.

Example scenario: when ganking, Ivern can plop a brush on himself, pseudo-range basic attack the enemy champion, apply red buff, ‘Q’ root, ally dash, and boom, guaranteed kill. Brushmaker is the ultimate easy to use, but incredibly difficult to master ability, albeit keep in mind the brush can be used against you and your allies. In fact, I think the skill can and will be used troll. Your ADC is about to get first blood? Nope, Brushmaker on top of the target and now they get away scot free. Yeah, that’s not pretty.

Well that wraps up his crazy set of- oh, wait, that’s right, he has ‘E’ Triggerseed and an ultimate. The ‘E’ is a shield, the ult is Annie’s Tibbers, but will knock people into the air… Ok then. Moving on…

Early Prediction
When I was first reading about Ivern, I was literally trembling in excitement about all the possibilities. The potential is absolutely incredible! Put Ivern in the hands of a pro and watch as they dictate and control the game with an iron fist. Low cooldown super engage and crowd control, high skill cap vision management, fast clears, quadruple buffs, even tankiness and peel, it’s astounding how overloaded his kit is without being broken. Er, maybe. One my fears is that he is far too extreme, he may very well be too feast or famine. Great when you’re ahead and have teammates to follow up, but awful when behind and have bad/low damage allies. Imagine a scenario when you’re behind, root an enemy, and then your whole team dashes over, well, now you’ve just made it easy for the powerful enemy team to clean house.

Another issue is that he simply unbalances current team compositions, not in an overpowered way, in the not enough damage and too much utility kind of way. As it stands, there are already two tanky ‘supports’ at top and bot, throw in another one and damage is severely lacking. However, what if he single handily brings back high DPS juggernaut tops? One of their biggest problems was closing the distance on a target, now, that problem is solved because Ivern has a free dash engage.

Schrodinger’s Champion
The road ahead for the Green Father is an interesting one. It’s possible he becomes 100% pick ban because of immense utility, or he just withers up and dies due to needing a meta overhaul to be effective. I guess, you can take it or leaf it.