So now we have the Jamaican-sounding, tentacle wielding, Priestess of a Dark God in the League of Legends Rift! Illaoi (pronounced Ill-owie) is one of the coolest champs I’ve played in a long long while. A juggernaut (tanky but capable of dishing out damage) who belongs in top lane, she can also go bot lane to create some pretty terrifying lanes to deal with. But in core meta you will find she hangs just fine with the best of the top lane bruisers. What does she do? She has a passive that creates tentacles that she can interact with, slam people with tentacles, and teach a harsh lesson to anyone who bothers her. 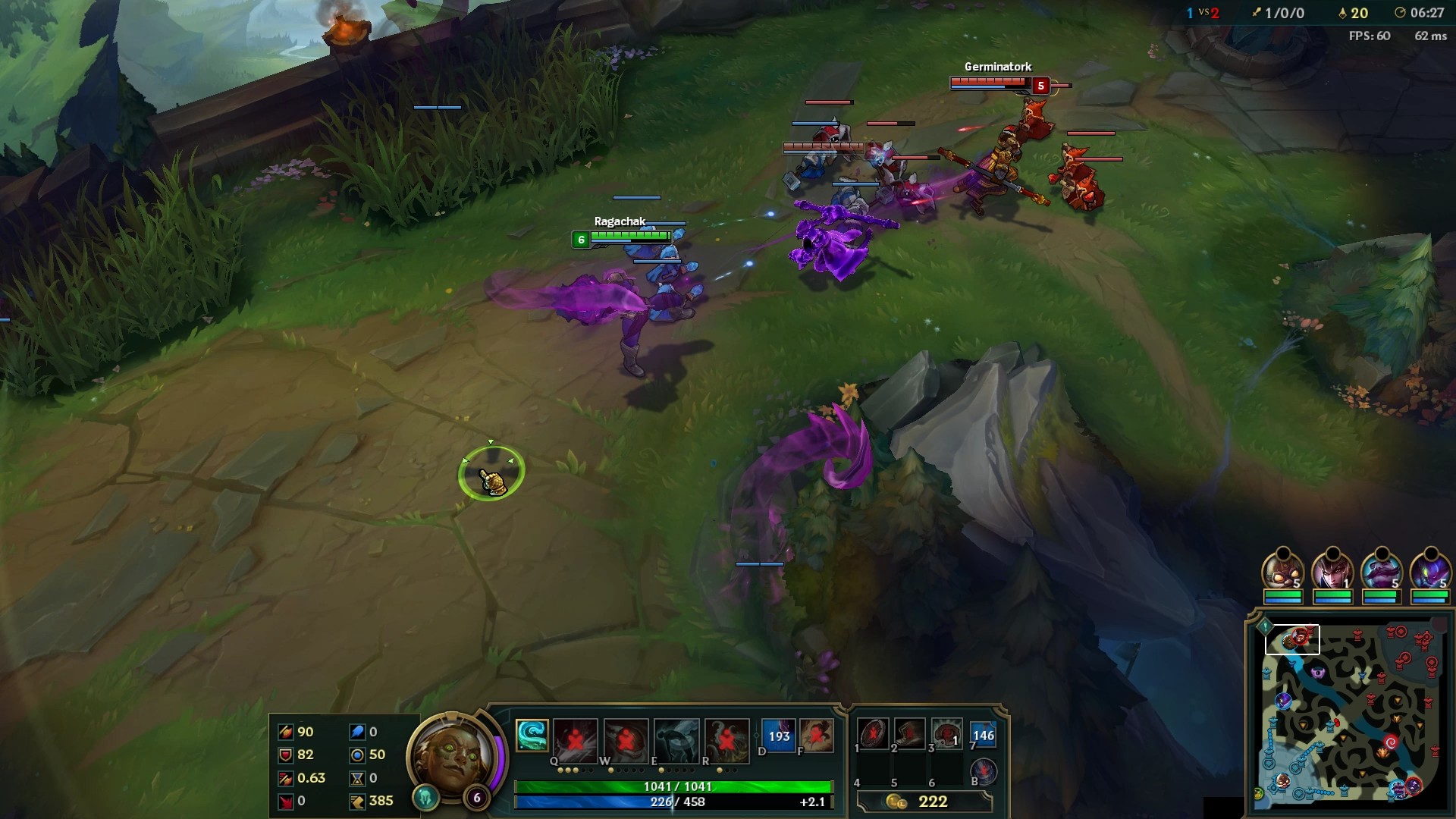 She’s beefy, throws around some pretty intense damage, and in general is a detriment to anyone in a teamfight, as she summons even more tentacles to be a bother! She’s got a lot going on that is far more of a nightmare for her opponents to deal with than the player to unleash. She’s incredible at zoning; while you can’t control where the tentacles spawn, you can help them along by standing farther from the other ones, closer to where you’d “like” one to go. They can also spawn on any structure in the game like towers, broken or otherwise. I’m reasonably sure I saw one spawn on a Trundle pillar! But she’s not without restrictions. Her base attack animation is ungodly, horridly slow. It’s relatively easy to avoid her main damage if you are mobile enough/paying attention. She doesn’t have much if any CC, and her one dash doesn’t go very far. When the fighting starts, you have to already be in, or well on your way to make a difference.

Naturally, as a support main, I tried to take her to the bot lane to become accustomed to her kit where I’m at ease. When I did, I used my traditional tank support runes, or a variety of them. Illaoi doesn’t require a lot of damage to be a threat. In fact, the games I won I typically did not buy a single attack item until late game. As far as runes/masteries go, my runes are pretty standard AD top with: Attack Quints, a mix of Attack/AD Pen Reds, Armor Yellows and MR Blues.

Jury is still out on the new masteries but I didn't find offensive ones useful for her.

Masteries may have gotten a touch up, but runes are still boring as Hell. My mastery page for Illaoi doesn’t even include Ferocity; it just isn’t necessary. I have one made for her, culminating in Fervor of Battle, but normally I go with 12 Cunning/18 Resolve. I tend to go with Grasp of the Undying, but if I really want health/sustain I will go with Strength of the Ages, but Grasp seems to be more reliable to me. I mostly go with tanky/sustain masteries; key ones appear to be Runic Armor (8% more lifesteal for my Q), Merciless (5% more damage below 40% hp on Champions for all the post-6 damage I do), and Unyielding (More defense is always great; she has to be up close and personal). It’s teleport/flash top and exhaust/flash bot lane for me on Illaoi.

Now, as to what she does and why it’s worth noticing:

Prophet of an Elder God is her passive, and it spawns (based on your level) tentacles on impassible terrain. Your tower, their tower, rocks, walls, whatever is convenient. They won’t spawn “too” close to each other, so move around when you see your passive tick down and get the lane set up your way. By level 17 or so I believe the passive was on a 12 second cooldown. The tentacles attack spirits, vessels, and anyone she targets with her W (Harsh Lesson). You can really inflict ridiculous damage thanks to it. 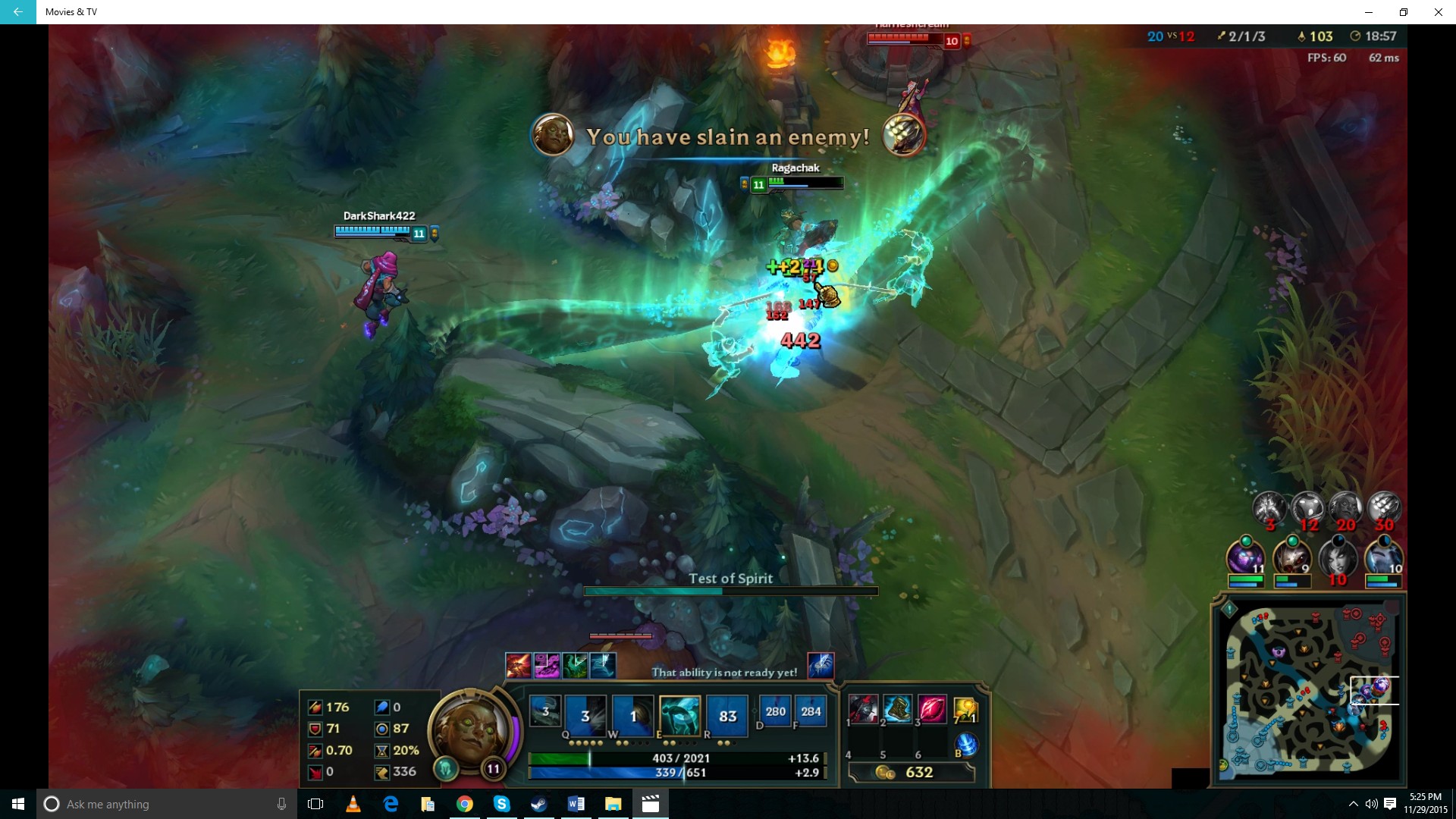 Jury is still out on the new masteries but I didn't find offensive ones useful for her.

Her Q, Tentacle Smash, slowly slaps a tentacle from her to a set range in front of where the mouse is hovering. This is a great wave clear, which is helpful because her AA is pretty much awful at the start of the game. What makes this your best move? The passive: Tentacles heal her for 5% of her life when they damage a champion (It makes sure to say “tentacles,” and not “Tentacle Smash”). In a team fight you can go from nothing back to full if things go right! It’s incredible easy to avoid though if people are mobile/paying attention/fast, so you might have to lead people into it.

Her W is Harsh Lesson, and normally has a decent cooldown. If her ult is active, it drops to 2 seconds, making it incredibly easy to spam! It makes her next auto attack a minor dash in which she imitates the “Macho Man” Randy Savage, leaping and hitting the enemy. This synergizes with the rest of her kit, because any nearby tentacles smash down right on that target too. I’ve had a good four or so hit the same person at once and let me tower dive poor Wukong, burying him without mercy. 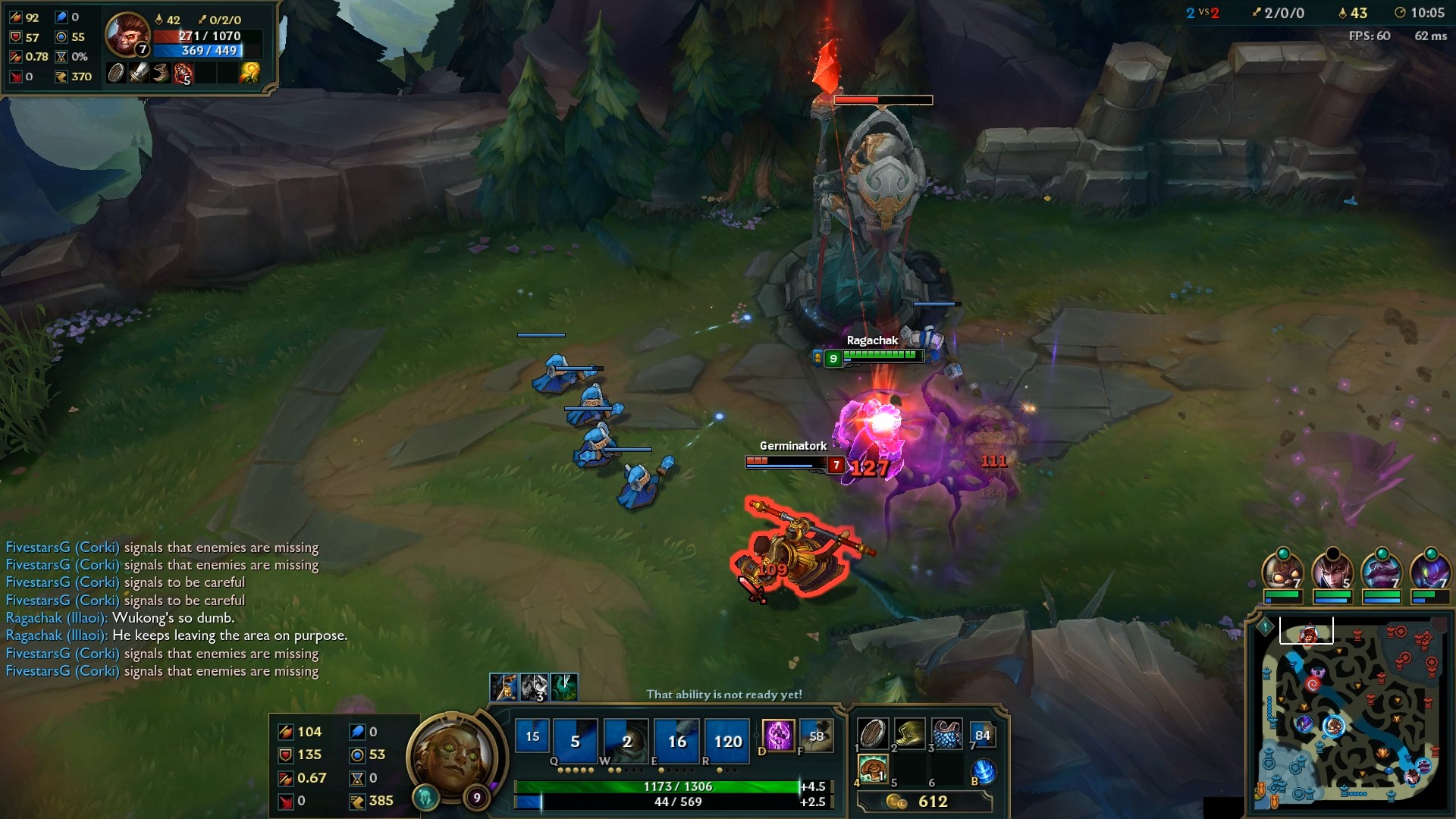 Your tower can't save you now!

Don’t miss her E, Test of Spirit! It has an insanely long cooldown and with good reason! It sends a tentacle out, and if it hits a player, it drags their spirit before Illaoi. It can be stopped by minions, so it’s really a high reward skillshot that will have lane opponents nearly as scared as if facing a Blitzcrank. For ten seconds you can damage their spirit, as can anyone else on your team; damage done to it transfers to the target (25/30/35/40%), which can definitely kill them. If the spirit dies or the person leaves the range, they become a vessel, and tentacles constantly attack them. Those tentacles spawn once every ten seconds, and you also get a decaying slow debuff. If you already have a few tentacles, you can time this with your W and smash someone out of the fight with little to no effort. It’s even better when the person runs towards their friends. . . On odd fact of this ability is that if your spirit is stolen, you can actually attack Illaoi to reduce the duration of the curse. Yet I almost forgot this was the case as I’ve never seen opponents try to attack me after being hit, even in team fights!

Which brings us to what makes her a real terror of teamfights, Leap of Faith. Smashing her tentacle pot (idol) into the ground, she does AOE damage to everyone nearby. That’s not all though! For each enemy near, a tentacle spawns, and for 8 seconds tentacles swing 50% faster, are untargetable, AND Harsh Lesson has a 2 second cooldown. I’ve found that I immediately get CCed right when I ult by smart players. Otherwise I have already decided who gets killed, Wing them a few times, going to the next person, and tagging someone with E so even if they get away, they’ll still die. If you catch the enemy team out of position in the jungle with nowhere to run, this can really spell the end quickly. 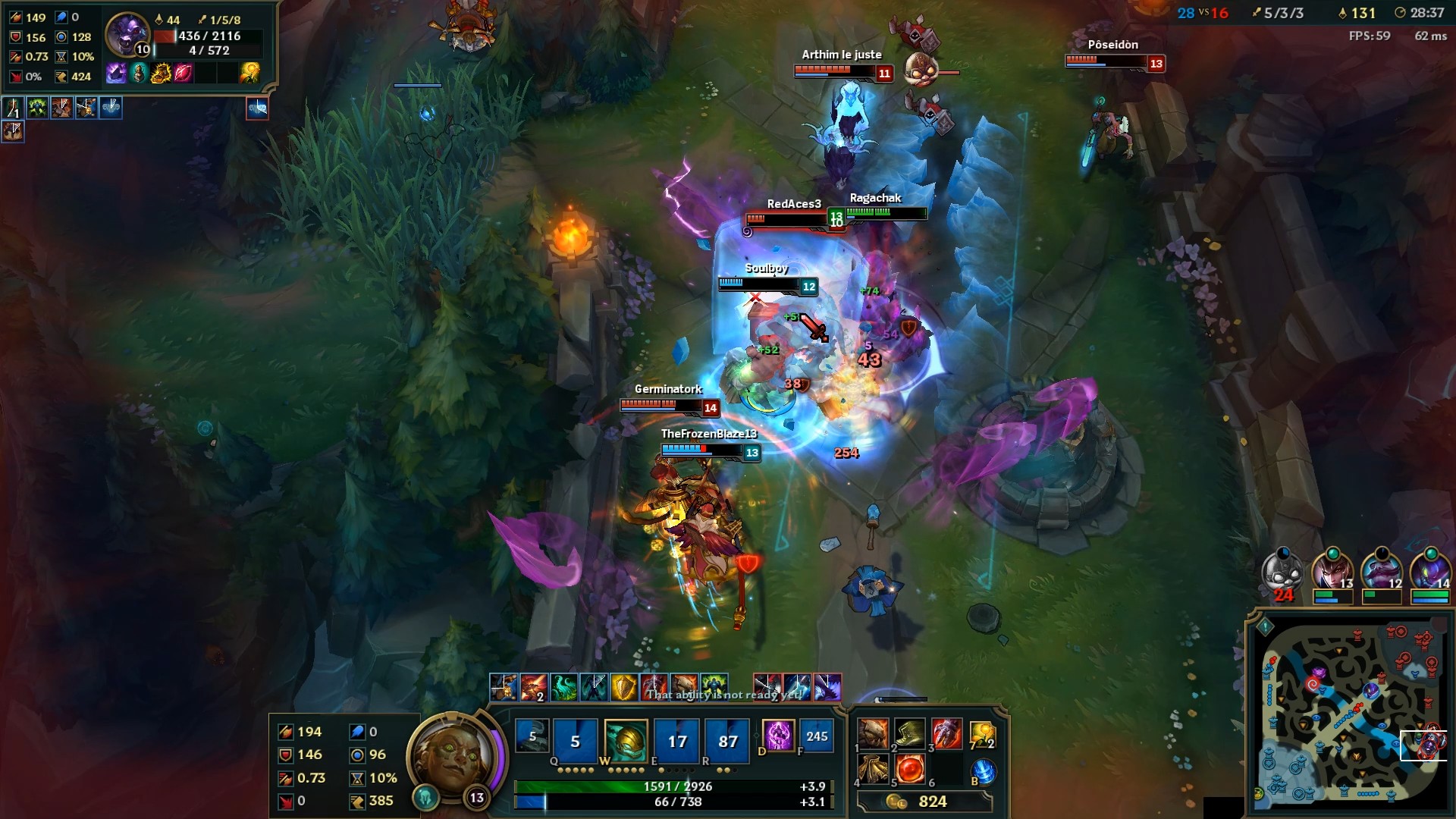 It takes a pretty chiseled veteran League player to see this many tentacles in a team fight and maintain composure.

I can’t stress enough the utility that Illaoi brings to the battlefield. Her tentacles combined with Q/W make it very easy for her to siege safely, since waves disappear, and dueling her means contending with her E. Again, you don’t really have to build damage items on her, but a single damage item if you’re ahead can pay dividends (Cleaver and/or Hydra). I tend to pick Dead Man’s Plate or Spirit Visage first, but I do get both. Randuin’s Omen for slow/tankiness, Frozen Heart or Fist are hilarious, though countering the enemy’s primary damage output is more important. Her build’s pretty flexible. You “could” go Trinity Force, but you have to be incredibly fed to make this worthwhile. I tend to avoid it personally. It’s also important to note that if you E your opponent under your own tower, it can and will tank it for them, which might spell disaster for you if you had been a little cocky.

I cannot stress enough how important being aware of the walls is; if you are not paying attention, you might not get more tentacles and will suddenly be at a disadvantage. It’s worthy of note that her tentacles on her passive last until they are killed, or are passive for a minute. That means if you are keeping time, you can W near them onto a creep and keep a ridiculous number of them alive. It will be mana intensive, but with a little math and attention to detail, Illaoi will test anyone who comes at her. She’s not so good at dealing with hyper carries because of the insane damage they do in rapid succession, but I haven’t found too many counters for her top lane, except someone who can outrange her or get away from tentacles quickly. Stick to battles of sustain and let your allies peel away bursters, and Illaoi will support your team’s victory nearly every time.