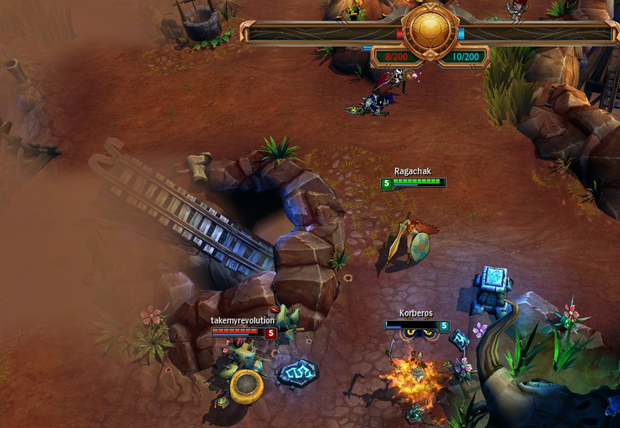 A Land Covered In Sand

Riot Games is presently making an effort to redo their already convoluted and tired lore; this is not particularly a bad thing. In the meantime we are given something to tide us over while we wait on relevant and interesting champions/reworks. Ascension Mode is one of those. Ascension, like all other “Game Modes” will likely only exist for a few weeks at the most, then it will disappear forever. In it, I feel that perhaps the developers are trying to make the Dominion/Crystal Scar noticeable again. There has been a fairly large outcry that Dominion is boring and it has no ranked gameplay so it likely does not appeal to the large amount of League players. So it is with that in mind that the sands of Shurima, home to a variety of characters (Nasus, Xerath, Renekton and Azir) is also the home of this mode. 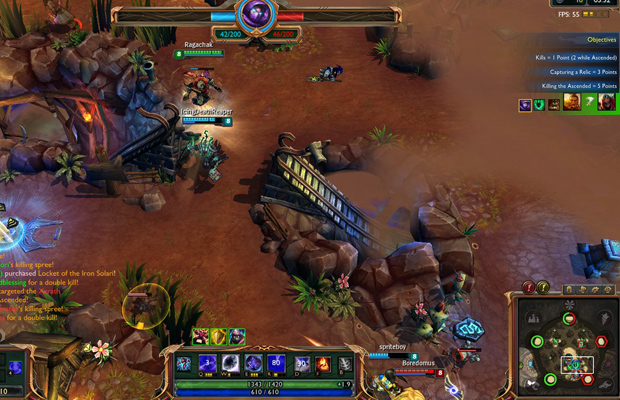 Generally I am interested in these new game modes as they can offer something that could be seen in the future, such as DoomBots offering the idea of aggressive, intelligent bots. I do not see anything that is terribly intriguing about this mode which is unfortunate; I enjoy Juggernaut game modes where a player gets an amazing buff that gets tossed around all match. But taking a fairly uninteresting, simple map and tossing a new skin and fog of war onto it does not really make it fun. It is a nice try but all in all, I do not feel that it offers anything to the League community other than a smokescreen to tide them over until they finish something promising. I went into this mode with high hopes but sadly they were not fulfilled. However I’d like to take the time to thank Twerkette and her Twitch stream (http://twitch.tv/wetbunny) for playing this mode with me and streaming it, no matter how awful the games wound up being! 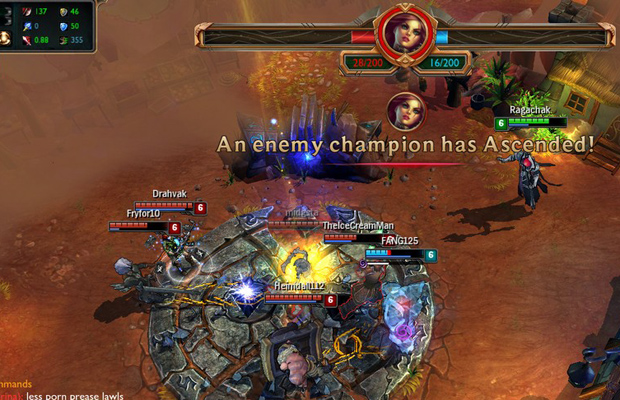 The way this mode operates is fairly simple; two teams of five ban three champions each, much like draft mode. However, it is still a “blind pick” mode where teams pick their champions at the same time, and mirror matches can appear. It is at least an interesting blend of the two match types. The game takes place on a small Dominion map, still labeled “The Crystal Scar” despite being the middle of the Shurima desert. This has no bearing on the game but it is still a nitpicky problem. Though the map is a circle, the layout is a pentagon, with two points for each team, and one “neutral” point at the top that both sides can travel to. Much like ARAM (All Random All Mid) mode, once you leave base you cannot return until you die; this is facilitated by an item in your trinket spot that will teleport you to one of these nodes that you choose. The first team that reaches 200 points wins the match and this is done with a very simple set of point allotments. 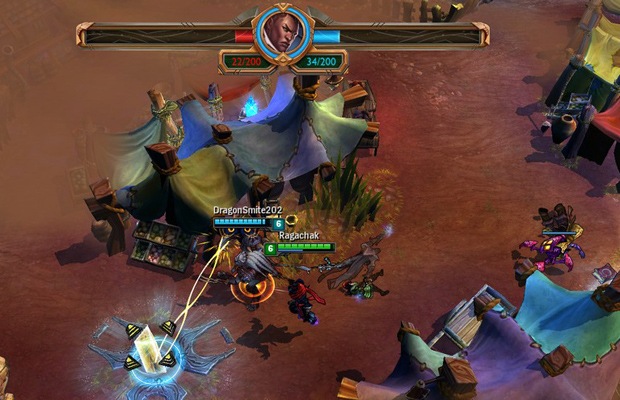 Those are the only way to attain points. It is important to mention again that there is no going back to base short of dying, so there are no full heals at base to be had like on normal maps. There are health restoring items much like ARAM that respawn fortunately. The relics spawn in the same locations everytime, near the spawn nodes. They respawn at a fairly fast rate, but enemies can attack you during the channeling and steal them from you. Soon after the match begins, a Xerath bot will spawn in the middle of the arena, and that’s when the chaos begins. Anyone can get the kill, and whoever gets the last hit will Ascend, becoming larger, and receive an incredible buff that removes mana/energy requirements, adds attack damage/spell power, and lowers cooldowns. It’s a pretty terrifying buff in the right hands. Xerath will not spawn again until after the Ascended has died so in theory, if the first buffed character never dies, it will not come back. 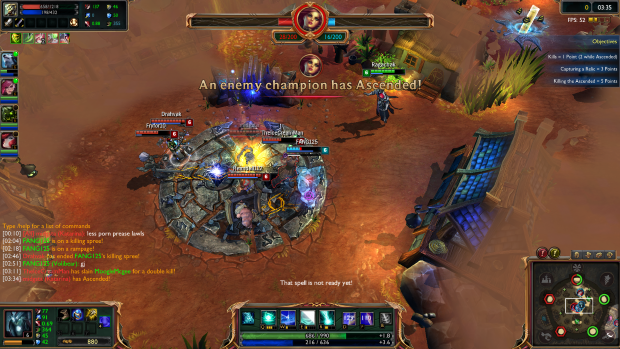 Each time the Xerath bot respawns, it grows a little stronger, and has a little more health to match the flow of gameplay. It would not be very fun if he just got obliterated in one hit! Then there is the Fog of War to mention: The map is constantly covered in a sandy fog that limits vision more harshly than anyone else in League. The length of your screen on a typical resolution is about all you can see here, and sharing vision with allies is the only way to have any idea about your surroundings. It is also pertinent to note that if you have the Ascended Buff, you can always be seen, on the map or on the mini map. There is no hiding in bushes or in the sand if you have Ascended; true power need not hide! 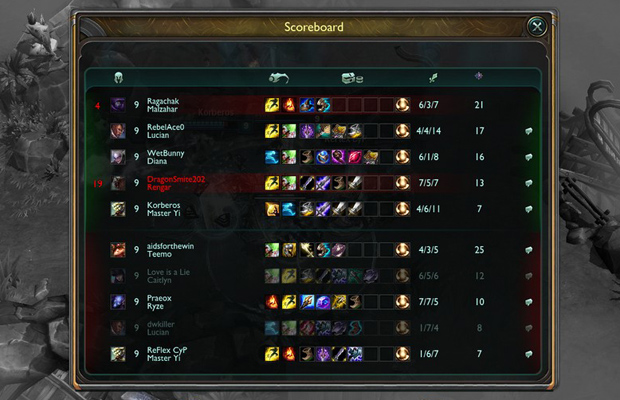 What is the point?

I wanted to like this mode, I desperately did. Sadly the mode is too much of a jumble of other ideas thrown together haphazardly. The item tree is from Twisted Treeline, the map is Crystal Scar; it combines Blind Pick and Draft Pick together in one place which is just peculiar. One of my major gripes is yes, it is a mish-mash of other modes all dropped into one place, but it is this writer’s opinion that this mode does nothing but promote poor gameplay and bad decision-making skills. The mode is fun, sure; having a God buff and running around decimating people as a variety of champions can be a lot of fun. I think the entire map being covered in a sandy “Fog of War” is intriguing as it makes vision a lot harder, and there are no wards. 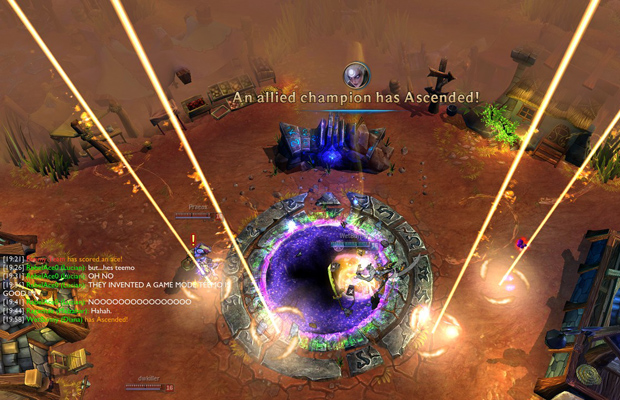 Now as far as poor gameplay decisions, players ultimately fight without regard to tactics or team roles in Ascension. Sure, your team having the Ascension buff is great, but wouldn’t it be better if you had it? Why should your carry have it, when the support can get it? That’s helpful, right? While on the surface you imagine your AP or AD carry would be ideal, there are no lanes or creeps to farm to buff them up to their godly levels. Jungling is out the window as well, leaving assassinations without proper planning as the ideal strategy of the day. Ultimately the mode feels like it is everyone for themselves, and I have seen more than my share of players just let their Ascended die because they were upset they did not get it.

Sure, teamwork happens but this mode feels cluttered and at the same time very barren. Instead of this, I would have rather seen something, anything else. Something relevant to the game instead of something to distract me. It is not bad, but certainly not the best temporary content that Riot has conjured up. There are of course champions that thrive on this map and are infinitely stronger than others. Ones who do not require resources, or have a renewable source of energy are strong in that they can constantly battle without worry. And once the buff is on them, they can just rampage across the map. Champions with a lot of burst also thrive here; I did not find a lot of fun to be had supporting on this map unless it was one that can deal a healthy amount of damage. All in all I think this mode is interesting, but I certainly was not as impressed as I thought I would be.