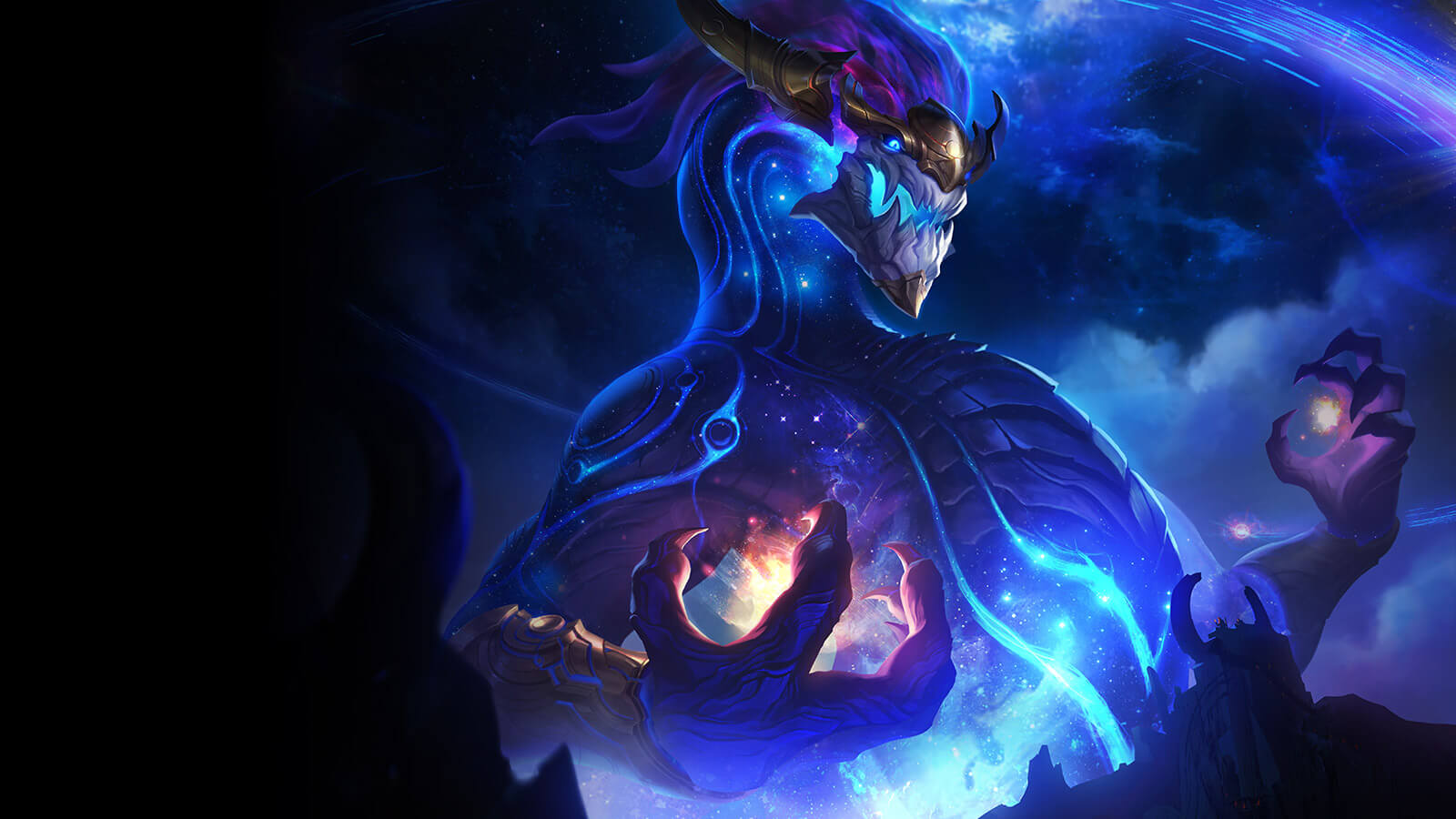 If you’ve been following some of the League of Legends Korean play, you’d see Aurelion Sol as a jungler. But just because a professional player does something wacky, doesn’t mean that regular players should be doing that. Aurelion is a solo laner, who in theory, can support since he has a stun. But he really shines in the mid or top lane position. Originally, Aurelion Sol [abbreviated Sol] was going to be a Dragon champion that was in development for YEARS. But instead of the rumored support Dragon, Riot finally scrapped the idea to settle for Sol, the Star Forger. His teaser reveals him to be smug, arrogant, and kind of an asshole. Well, he DOES create stars, and galaxies. He seems like he’d be overpowered on such a small scale. What do I think of him though? I enjoy him as a character. He’s very hard to get right now since everyone wants to play (or ban!) the new champion. Would I ban him for reasons outside of being an asshole? Probably not. He has a REALLY long stun, and his E, while making him incredibly mobile in the mid to late game, has a 50s~ cooldown which basically leaves him with two ultimates and little spike damage outside of those epic moments.

It's said towers blow themselves up when in his presence.

Speaking of the downside of having “two ultimates,” his actual ult feels a bit lackluster. Still if you can master the awkward feel of positioning, his sustain damage and farm is pretty wild. Sol is pretty easy to prep for, Rune/Mastery wise. He doesn’t require anything fancy or complex. 12/18 Masteries, culminating in Thunderlord’s Decree since it’s still ludicrous. You could go Double-Edged Sword, but I’m a fan of the Thunderlord passive. As far as runes, I go with Magic Pen Reds, Health or Armor Yellows, Magic Resist Blues, and AP Quints. The penetration makes every hit matter in the early game. However, he’s pretty fragile and forced into harm’s way to utilize his orbiting stars, hence the Yellows being possibly health. Combine this harm’s way playstyle with zero escapes, and you’d best focus your Summoner Spells on survival to stand a chance of not feeding.

He doesn't start team fights, but when he arrives he ends them.

You can build him as a glass cannon, but I personally don’t recommend it. He shines brighter as a Tanky AP, such as Nunu might be built. You know what’s been kind of popular lately? Frost Queen’s Claim mid. I’d consider getting it on him too, to set up for big plays. My ideal set up tends to be Rod of Ages, Rylai’s, Abyssal Scepter, Hourglass, Boots, Liandry’s Torment. A nice mix of damage and utility, creating tons of slows, extra damage, and survivability.

His kit is pretty easy but has some glaring weaknesses. His passive [Center of the Universe] makes 3 stars hover around him constantly. They do damage based on level/AP, and if he is debilitated [RE: Can’t cast spells] they disappear. They also apply Spell Affects, so on-hit Sol might be hilarious. If he’s in a bush though, they do NOT become invisible too. He can’t exactly be stealthy or hide. Be aware of this. They also execute minions under 25 hp, and his W [Celestial Expansion] make them use a much wider arc, but takes mana. You can toggle it on and off, and the ability increases the damage they deal. His Q [Starsurge] creates a new galaxy and fires it forward. It has a pretty meaty stun, and will keep traveling with you [whatever direction you fired it in] until you hit Q again, or it leaves your outer limit. While it’s active you also get a 10% stun. This is where his combo comes from. His E [Comet of Legend] gives him something called “Escape Velocity,” which stacks up to 100 while moving. He gains additional move speed if he stays traveling in the same direction. Turning consumes that move speed, as does taking damage. At 100, you can activate Escape Velocity to fly! While flying, he ignores terrain, has unobstructed sight, and also ignores unit collision. However, everyone can see him when he does it, even over walls.

They say a Teemo that fell into his orbit was, for a moment, not hated by all.

So what’s the big deal? He can cast Q during it, and it grows the longer it’s in flight. Taking damage while flying cancels it, but you can activate it in base, fly swiftly to the teamfight with Q in tow, stunning the entire enemy team before slapping your ult on them [Voice of Light] to slow them again and deal damage. Enemies in his Outer Limit are knocked away as well. Everything about his kit screams Arrogance. He doesn’t bother to hide, or try to stealth, and he seems to be proud to let enemies know he is near, and ready to fight. Heck the fact that his preferred method of team fight decimation is to be fashionably late exemplifies his personality. You have to be aware, and in that frame of mind when playing him. While yes, he has quite a bit of damage, I’d use him more as a utility, to set up that big stun and have your other carries make the big plays. It’s rough to be able to plan so far ahead that you can stun a whole team. Leave the needed fly in and knock up to Malphite or Alistar, or you’ll have a frustrated Yasuo waiting all game for you to get it right. That is pretty damn demoralizing.

He is the most interesting dragon in the galaxy.

While you are spending all your time ensuring that you’re being a big bad ass dragon, the enemy team will be plotting to take you out of the game early and often. Assassins, or burst champions that can all-in him [deal mortal damage in one big combo] are his bane. Once they are inside of the ring of stars, that’s the end of Aurelion Sol. As far as his abilities go, I wouldn’t even put a point in his E until 4 or 5. It’s useful, but you won’t find yourself using it often except to set up plays thanks to the ridiculous cooldown. I do love the E+Q combo, though. I haven’t been able to emulate the galaxy-sized explosion that I have seen on Youtube, but I love that the skill ceiling teases such potential. He sees occasional bans in my ELO, and I don’t forsee big nerfs/buffs in his future. He’s interesting, fun, and offers a niche pick for summoner’s to main and catch their unfamiliar foes with their pants down. But please don’t emulate jungle Sol just because you saw someone else do it. Please? At least not in my ranked match. I guarantee if you’re in my elo, you haven’t had the necessary time with Sol to make this happen!