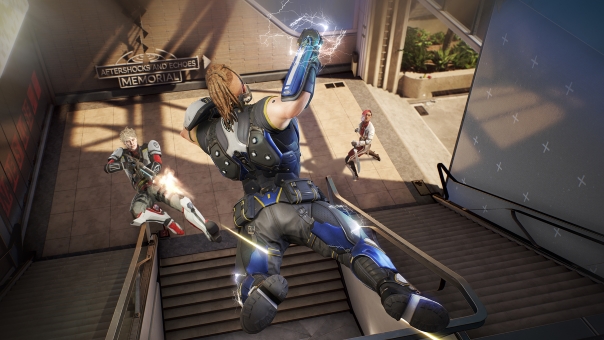 With launch only a week away, Boss Key Productions has been ramping up their media blitz for their premier title, LawBreakers, with both a PC and recently announced PS4 release. And practically out of nowhere, they decided to let the public experience this gravity defying shooter one more time by hosting an open beta test, which includes more balance changes, a new sandbox tutorial mode and new features specifically for Twitch.tv streamers. Personally, I could have sworn that the Rise Up beta was going to be the last one, but yet, here we are again…

Well, more time playing Lawbreakers before its release is always welcome in my book, so it’s time to give another report on these changes.

The assassin surprisingly got some tweaks to make this character feel more potent in combat. With ammo increased on her shotgun, Frenzy AOE, Frenzy health restoration along with a decrease on her shotgun charge and dash/grapple, these QoL changes made her feel much better to play, since players will have a need to use both melee and ranged weapons effectively rather than just one or the other. The only nerf given to the Assassin this time around was the decrease in range for melee attacks, but since all melee attacks (included kick attacks) have been reduced across the board from 600 to 400, the change doesn’t help or hurt the Assassin’s cause.

One role that I’m not so surprised about receiving changes was the Wraith, whose speedy and stabby antics enraged many players during the Rise Up beta test. This time around, his HP and pistol damage (at max range) was reduced slightly, along with a big reduction to his slide damage. The one big change to the Wraith is that now that the wasp stab has a range reduction whenever it gets used multiple times in a row in order to discourage players from spamming it.  As it stands, I actually quite happy with all these changes. Nerfing the slide attack damage is fine because 85 slide damage plus a 125 wasp stab was way too much free burst for Wraith players to abuse. The reduction on range with consecutive wasp stabs also seems fair, not because of how frustrating it can be to deal with a wraith in melee range, but because of how it can be used to shift momentum on a dime. Even with the blindfire mechanic, no one but the assassin can switch directions like a cheetah on steroids, which made the Wraith hard to pin down. Main difference with the assassin and the wraith in this situation is that the assassin switches momentum using dashes and grapples, which is tied to cooldowns so it can’t be abused. Meanwhile, the Wraith’s wasp stab had no cooldown and could be used whenever, so he was a total beast when it comes to evasiveness. Still, all other changes are sound in my book, because they reduced his power without getting rid of what made the wraith fun to play. He can still jump and run around like he always could. It’s simply now that Wraith players will have to be a bit more cautious when trying to move in on their targets.

(Of course, that won’t stop people from complaining about this class and saying that he should get hit with another nerf bat.)

The Titan gained HUGE buffs in my book, as the big bruiser now has six rocket shots, slight increase on reload speed, and a reduced cooldown on her pulverize move. While many people might not even notice the increased reload speed, I certainly have been feeling the effects of the new reload due to how frequently I used my rockets in just about every situation. Mixed in with the six rocket shots, this makes her more deadly when it comes to offensive engagements as she can fire two rockets to achieve max speed in zero-g and still have 4 shots at her disposal.  Many players have picked up on this and the Titan slowly became a choice pick when it comes to Turf War matches. As much as I enjoy seeing the Titan get played more often, I hope this isn’t another case of over tuning a role, only to knock it back down again…

And speaking of over tuned: Boss Key Productions declared that the Juggernaut was too powerful in the Rise Up Beta, which I can see due to the shield health buff, making this beast of a robot a requirement on every mode except Turf War. So to scale him back a bit, they lowered the shield HP by nearly half and increased the fuel cost needed for his Armor Protocol skill, and I can definitely say that the changes here are a huge nerf that makes it way less effective to play Juggernaut aggressively. I can understand the shield HP and shotgun damage nerf, but increasing the armor protocol fuel depletion really hurts. I would have rather preferred that they decrease the damage decrease when armoring up instead. As it stands, this may help push the Juggernaut back down to being a defense oriented role, but for me, I’m deeply saddened by these changes and probably won’t be using this role as often as I used to.

Enforcer was also on the chopping block as he received buffs and nerfs to his Aerator rifle. Increased ammo capacity but with a reduced damage and max range, along with a reduced rate of fire increase from his Distortion Field should bring him in line with the rest of the cast. Personally, I’ve never had that much of an issue dealing with Enforcers, but apparently lots of other people did. So much that people called the Enforcer just as overpowered as the Wraith. While this completely flew over my head, I suppose I can see why they made these changes, since an enforcer with good aim and with a distortion field active can destroy any enemy in two seconds or less.

Lastly: Gunslinger got some strange buffs in the form of increase damage with his TAC knife, including increased thrown and melee damage when used. I think it’s kind of strange that they would buff the TAC knife this way to encourage more offensive play with it, because trying to hit any moving target with it seems like pretty difficult task. I’d much rather they buff they enemy detection team with it slightly instead, but still, a buff’s a buff. I’m sure some gunslinger players will be happy with this, regardless and enjoy lobbing knifes more often.

There was a single change also made to the Vanguard, but it was a slightly decrease in fuel usage for her Pulsar attack. A nice buff to be sure, but not really enough to talk much about.

For those that want to be able to play around in an open map and get a better feel for their roles and movement in the game, then the sandbox tutorial serves this simple purpose. While I still would prefer a more interactive tutorial mode where players are better taught the ins and outs of Lawbreaker’s gameplay, especially when it comes to how movement works, because I swear that so many players have no clue how momentum-based the game’s movement is.

Still, the sandbox mode does let you experiment with some wacky bots to see how they will react in zero-g situations.

Also included in this update was Twitch.TV features. Players can now link their Twitch account, temporarily swap their Steam ID with their Twitch ID and show everyone that you’re currently playing with that you’re live on Twitch. It’s kind of a neat feature that I’m a bit surprised more popular Twitch games haven’t implemented today. Haven’t included in more popular gaming titles today. While I can’t say with complete certainty that Lawbreakers was the first to include features like this, it’s a welcome addition that I’m sure the Lawbreakers community will get some mileage out of, and of course it’s also cool knowing that some players that are livestreaming will be able to capture their crazy killstreaks or rage inducing death counts a lot easier now.

With the Open Beta already in the books, there’s only a week left before the game goes live. Also disappointing to note in my case, there was a two hour preview session hosted which showcased the new Trench Map while they were stress testing the servers. I REALLY wanted to try out that new map, but sadly I wasn’t around my PC during the time that the stress test happened, so now I’ll have to wait until release to give my thoughts on it… Damn.

Still, I certainly can’t wait for the full release of this game, with all the customization options, new map and Harrier role being available, there’s going to be a lot to talk about come August 8th. Stay tuned for the full review of LawBreakers here with us!