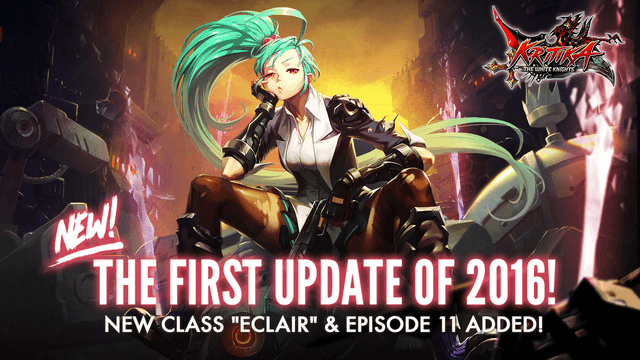 Kritika: The White Knights’ Eclair is charging onto the battlefield! As a gun wielding magical swordsman, Eclair showcases her abilities through a wide array of flashy attacks such as:

While she may appear to be an ordinary student, the Eclair will pounce at any foe who may underestimate her abilities. Hot-tempered and always looking for a fight, Eclair demolishes her enemies by using a combination of guns, and magically summoned swords.
Players will also be able to adventure into a new campaign, Episode 11: Khordus. Set in an ancient temple, you must battle your way through a variety of new and exotic animals and warriors.

In addition to new stages, and the Eclair class, other improvements will be implemented such as improved Monster Wave rewards, new Black Market items, and Guild Battle pet improvements. Now, when you set your pet as a defender, you’ll be able to utilize them in other game modes, without their defending position being affected!
Kritika: The White Knights Version 2.22 is available now for free download on App Store and Google Play.