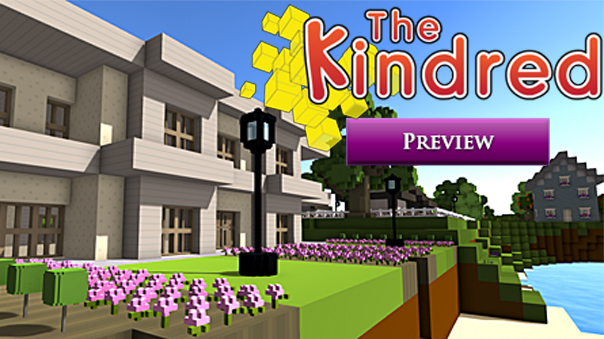 The Kindred is a creative sandbox game where you have to take care for your kindred and live a peaceful life building up from basic gatherers to a more civilized people. It’s been over a year since I have last played this game and it was about time I gave it another look. I’m always a huge fan of strategy games where you can decide your own pace, and build everything from the ground up without having to worry about any armies marching upon your land to do harm. The Kindred is more focused on building everything from the ground up, but with its own set of dangers. 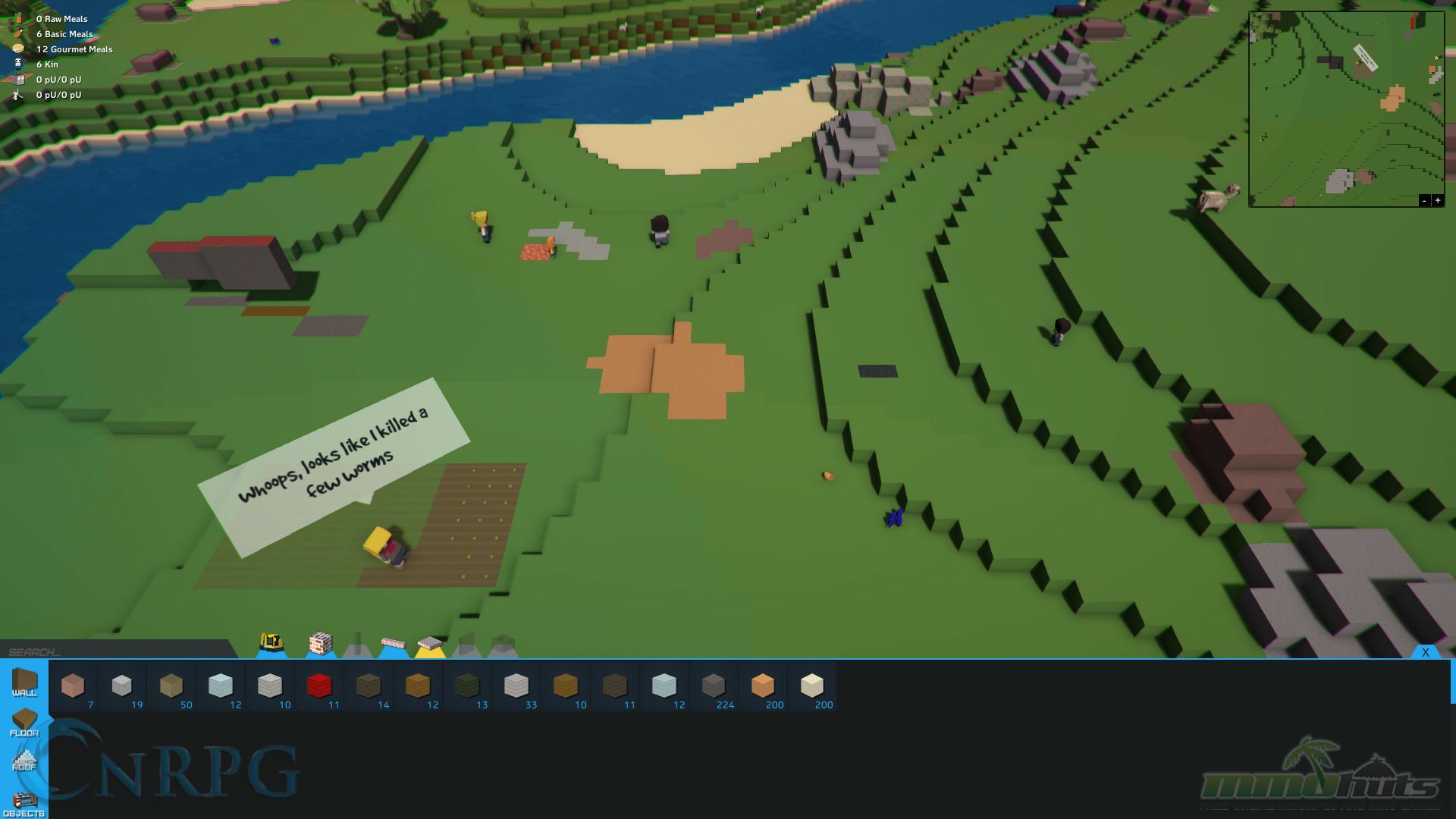 Through a very basic tutorial you are introduced to the concepts you need to succeed. And while the main goal is obviously making sure your Kindred are able to live, you still have to figure out how exactly you want to do that. The game throws you into the deep, and even though it tells you how to get started, it doesn’t really tell you a whole lot after. When you are set up and have given your Kindred a place to sleep and some crafting benches to start with, you are pretty much left to your own devices to forge a path for your people as you see fit. It’s great in concept but the presentation of it left me feeling a bit lost as to even knowing what I could do next. 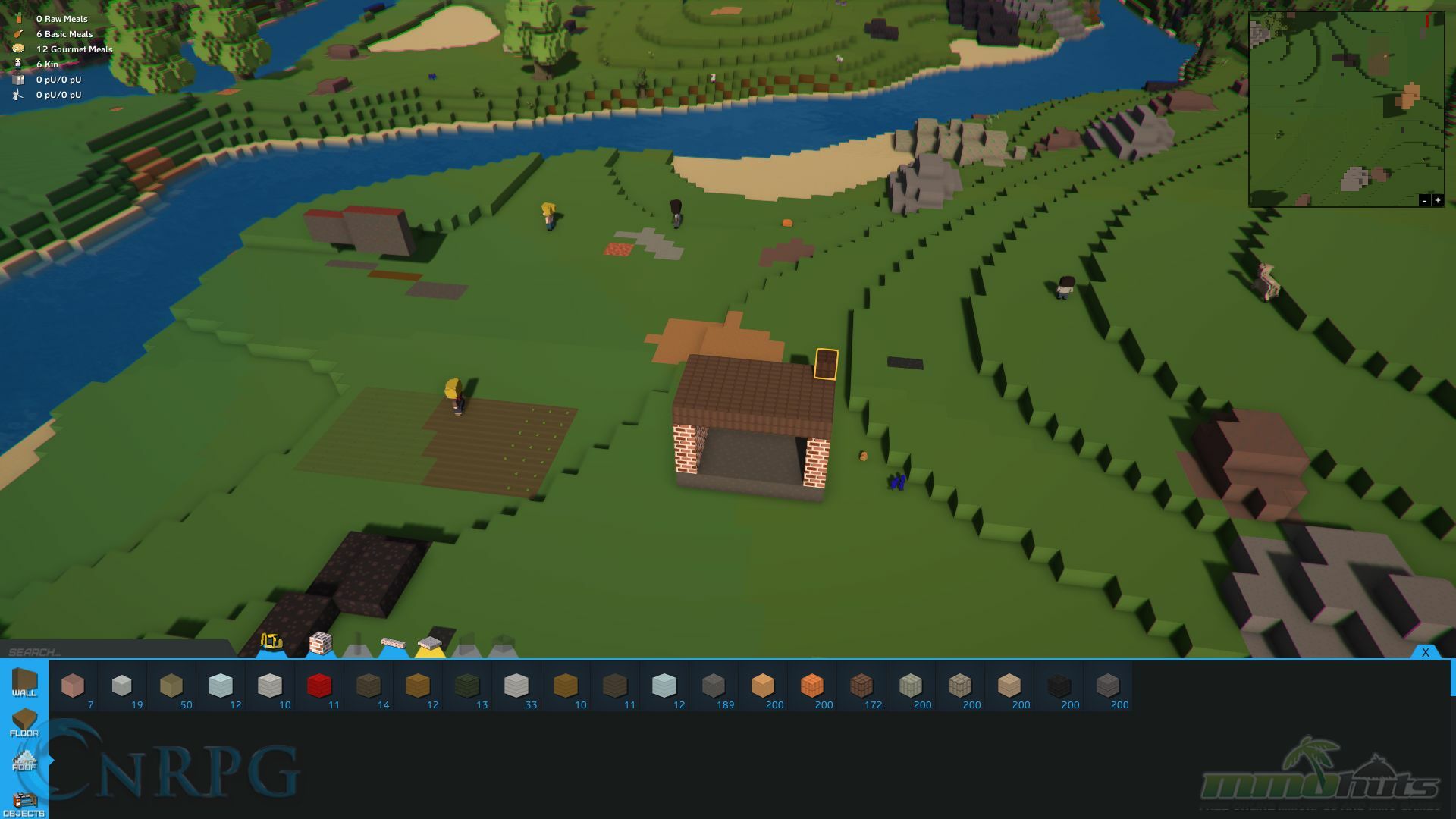 After fiddling around for a bit I realized I could make an animal pen; I had some chickens running around the area so I set my Kindred out to build a coop. Their eggs would provide a steady and reliable source of food. When it comes to strategy games where you have to build from the ground up, I always try my best to get the best possible piece of land I can get to set my headquarters up on. But in The Kindred every world seed is different, and you have to hope you have some sort of a flat spot nearby where you can get started. Unfortunately in my second playthrough I wasn’t so lucky and found myself on a rather hilly and unsteady region. Thus my next goal was to terraform the location to be as flat as possible so I had plenty of room to expand with farms, housing, and whatever other buildings of interest I stumbled upon while exploring the game. Having all these vital buildings in close proximity was key to ensuring my Kindred would be as productive and efficient as possible.  I started my focus on all the piles of minerals nearby. These mineral piles can be quite large so I figured I would mine them out until they were flat with my starting village structures.  Getting it all flat is a lot of work though, and I decided that the time would best be spent in getting the houses sorted for all of my villagers. I also needed specific houses for all of my crafting benches to get somewhat of a structure inside my village. 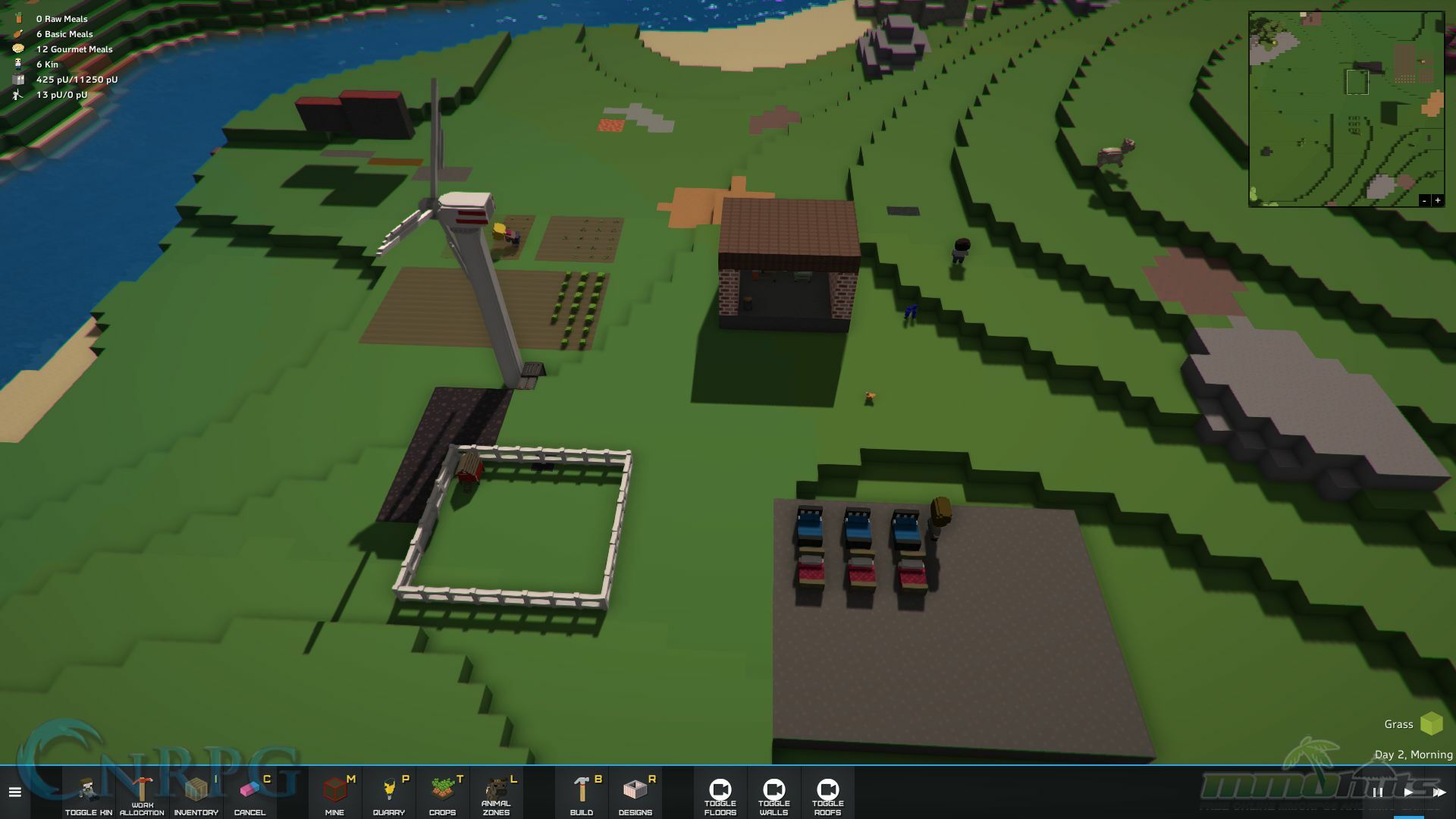 When you start playing you are given random Kindred with their own unique skills. You will have to give your Kindred individual jobs. Each Kindred has its own set of levels for all of the respective jobs, and you will have to play around with your Kindred with who you want to set on each job. Since there are only a limited amount of tools available, you will have to play around to give each of your Kindred some work that they’re specialized in, but it requires some shuffling around. There’s only so much time and energy in the day for each Kindred, so you have to be careful not to assign strenuous work like mining, crafting, and woodcutting all to the same guy. These decisions are probably some of the toughest and yet most rewarding decisions you’ll make in the game. It’s sort of like playing The Sims on a village-wide scale. 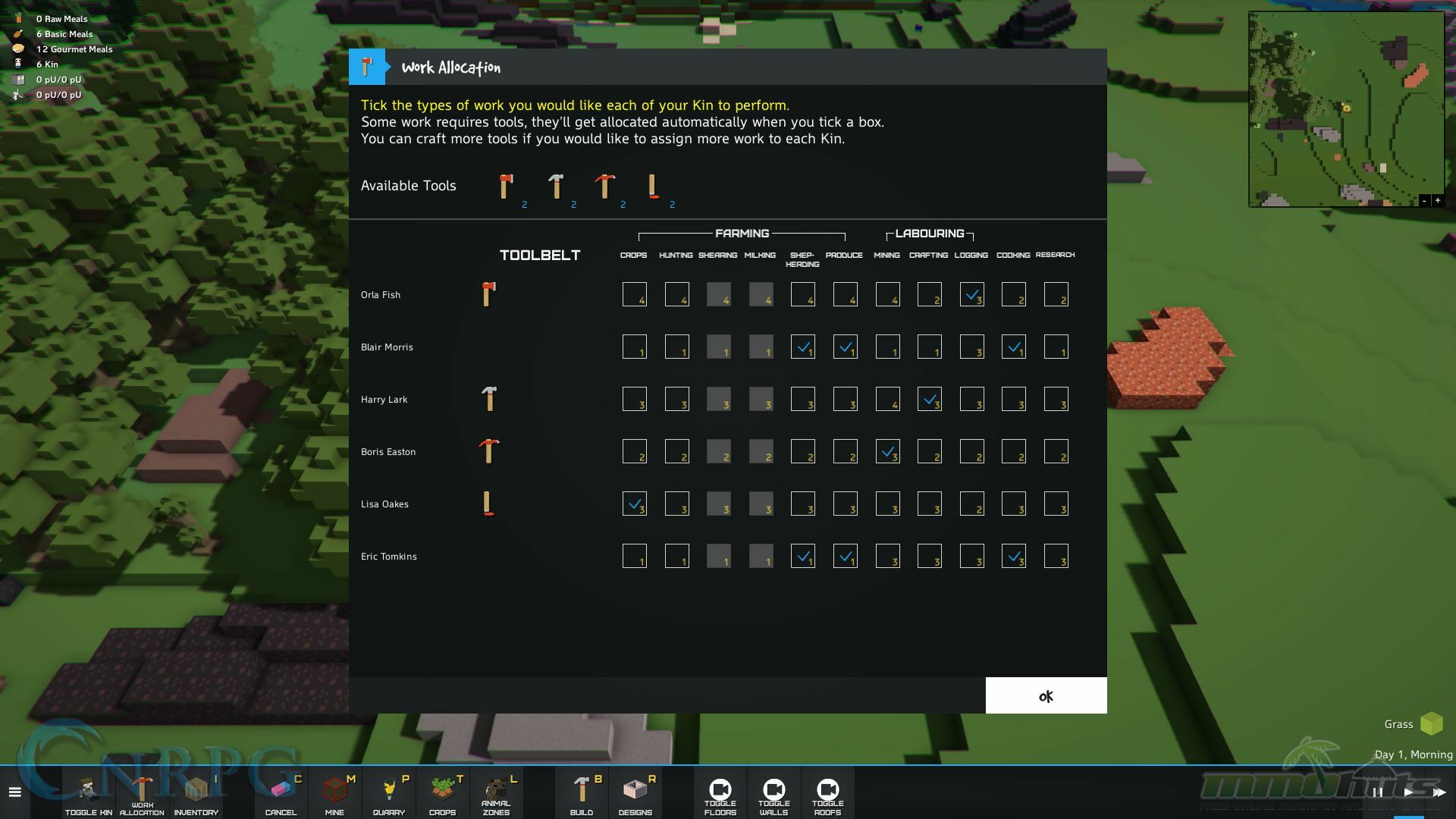 The Kindred isn’t just a game where you can let your creativity run wild. You still have to plan ahead and make sure you have the required materials for all your inspired ideas. So when you have finished your sleeping area for your Kindred, and gave them all the required tools and work benches, it’s time to get your Kindred some wood. You will have to find some trees and chop them down. Next up are the other materials. Since The Kindred is basically a top down version of Minecraft, but then with a few more friends to help you out, you can easily navigate the area around you and search for the required blocks, or materials rather, that you need for your next goal. Since you want to research other tools and machinery, you are quickly set with the goal to make some steel. This is made by smelting iron ore, and even though there usually is some around you, you can’t always depend on the very few blocks randomly scattered around. So it’s also best to start working on your first quarry as a high priority village expansion. 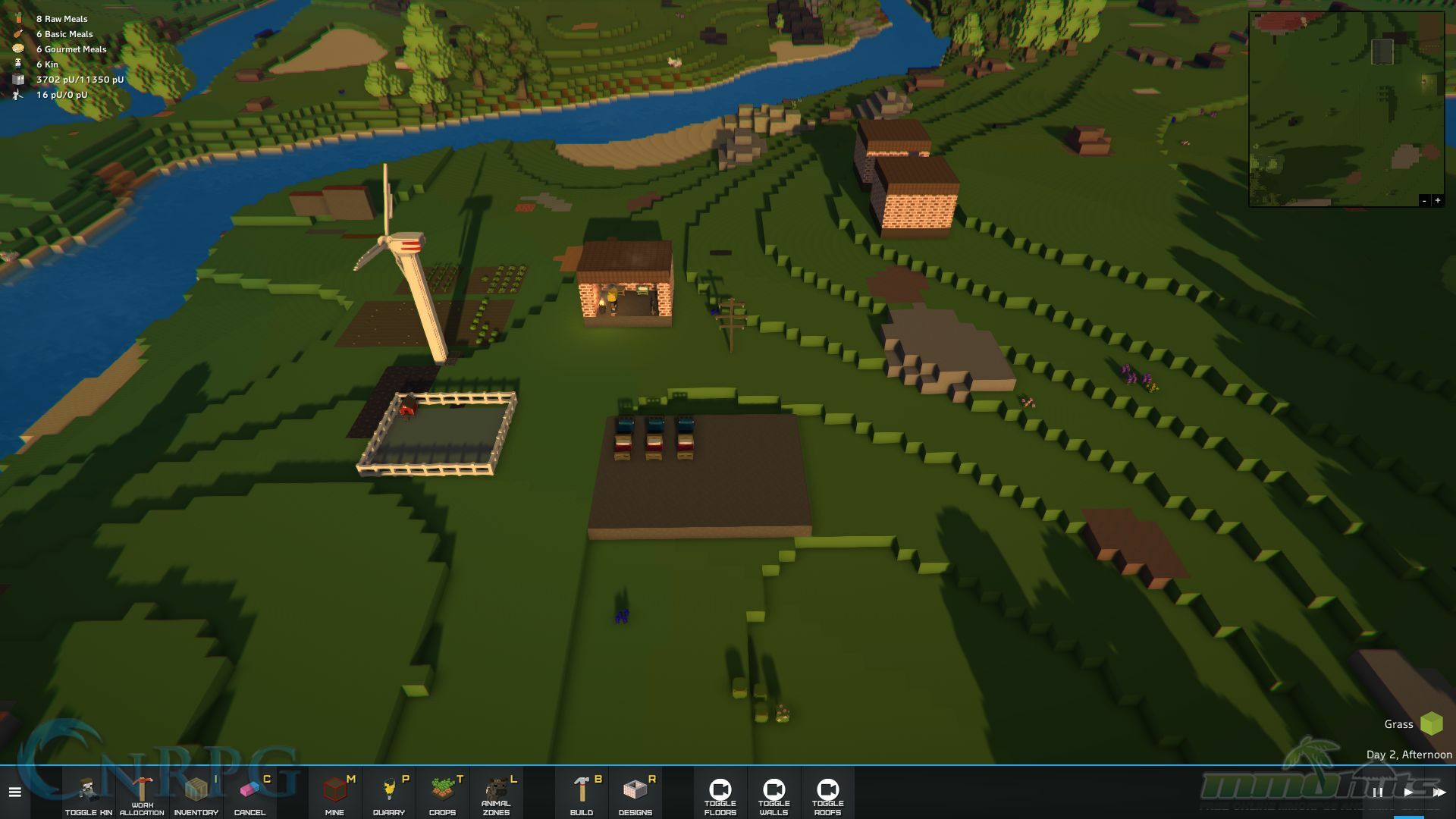 Before you know it, you are four hours further into the game and worrying about what kind of fences you want around your Kindreds’ houses, and if you want to give them some flowers in their own little gardens. The Kindred is a very slow paced game, and you are never really in a life or death rush to act quickly. But the time never stops, and although progress might be slow, every time I played the Kindred, I was always surprised how quickly time flew by and how little I had done. Even getting your Kindred sorted at the start, and getting a single house going might take a whole hour. I know, I am a bit slow and never like to speed up my games, but the Kindred really gives you this great relaxing vibe where time is not of the essence. In a world of strategy games requiring twitch reflexes and insane actions per minute clicking, The Kindred offers rewarding strategic gameplay without making it feel like a stressful job.

State of the Alpha: Good

While The Kindred is still in Alpha and has been for quite some while now, the game has had some major updates since last year, and the bugs that plagued the game back then has been sorted out. The Kindred is a really calming and relaxing game to play, though it takes quite a bit of time just to get the basics going, which might put off less patient gamers. This slow initial start also kind of hurts the replay value as you know if you want to build a new world, you will have to begin the long trudge all over again. In a way, the game becomes a bit of a grind because of this pacing. However, the low stakes gameplay makes it ideal for newer younger gamers being introduced to the genre for sure. There is no murder, fighting or any sort of scary dangers, but there are a few encounters that will be challenging that teach you how the game and the actual world works in one way or another. The Kindred is a very simple, straight forward strategy game that I definitely recommend to any strategy fan, but do note it can get a bit stale and boring after a while.