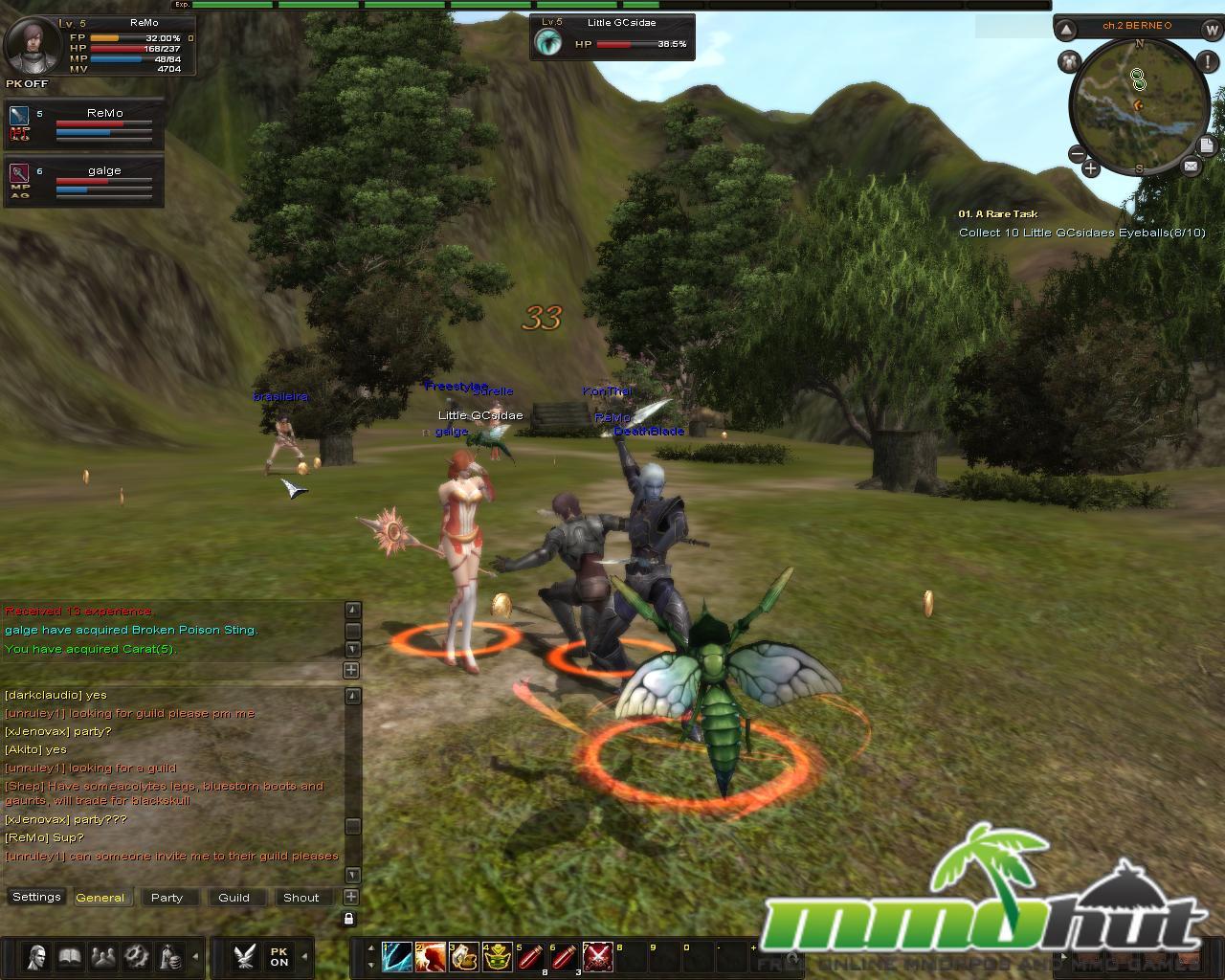 Karos Online is 3D, fantasy MMORPG published by NHN. The game is set in the vast, open world of Asmara. I say ‘Open World’ for two reasons. First, there’s very little ‘zoning’ in Karos; instead players can move in and out of cities and areas without going through any loading screens, except when entering dungeons. Secondly, the environments in Karos just feel more immersive; as buildings in the distance are massive and clearly visible, the tree leaves are blown by the wind and the water graphics are gorgeous. Strictly ‘graphics-wise’, Karos Online is quite a masterpiece. The game’s graphics vaguely resemble the visuals in games like Lineage 2 and Perfect World, except a tad crisper. Karos Online has a lot more to offer than just visuals though.

Like many other free-to-play MMORPGs – the folks behind Karos Online really didn’t put too much effort in the game’s character creation and customization options. The game has six playable classes – Mystic, Bow Mistress, Paladin, Rogue, Sorceress and Blader. Most of the class names are self explanatory; Bladers are ‘Warriors’ while the Bow Mistresses are ‘Archers’. The only confusing two classes are Sorceress and Mystic. The sorceress specializes in ‘debuff’ and ‘curse’ spells while the Mystic is more concerned about dealing damage. The classes in Karos Online are unfortunately gender-locked, meaning players cannot change their genders. All sorceresses, blade mistresses, paladins and mystics are female, while all bladers and rogues are male. Each of the game’s six playable classes can advance into one of two new jobs at level 15, which is explained on the overview tab. The actual avatar customization options extremely limited, as the game offers only three choices for face type, four choices for hair type and eight choices for hair colors. That’s the extent of the game’s customization options.

One small complaint I have with Karos Online is that the game has very little direction. Upon first creating a character and actually entering the game, players aren’t presented with any cutscenes, quests or really much of anything to ‘ease’ them into things. Players will basically have to just start grinding away or grabbing random quests from nearby NPCs, which isn’t bad in and of itself, but I feel that when I play a game for the first time, the game should at least try to grab my attention. Dungeons and Dragons Online, for example, did this quite well; the entire first twenty minutes or so of the game were heavily story-driven and a bit linear, which made getting into the game easy. Even GhostX, with its terribly poor English translations, had a linear, story-driven introduction which helped players ease into the game. In its current state, Karos Online basically throws the player into the game without any background or direction. Now, this isn’t exactly a big deal for experienced MMORPG gamers, as most of us already know the ‘deal’; talk to nearby NPCs, grab quests, kill monsters, level up and distribute skill points. But those ‘casual’ gamers who haven’t played many MMORPGs before likely won’t stick around long enough to discover some of the game’s finer aspects. 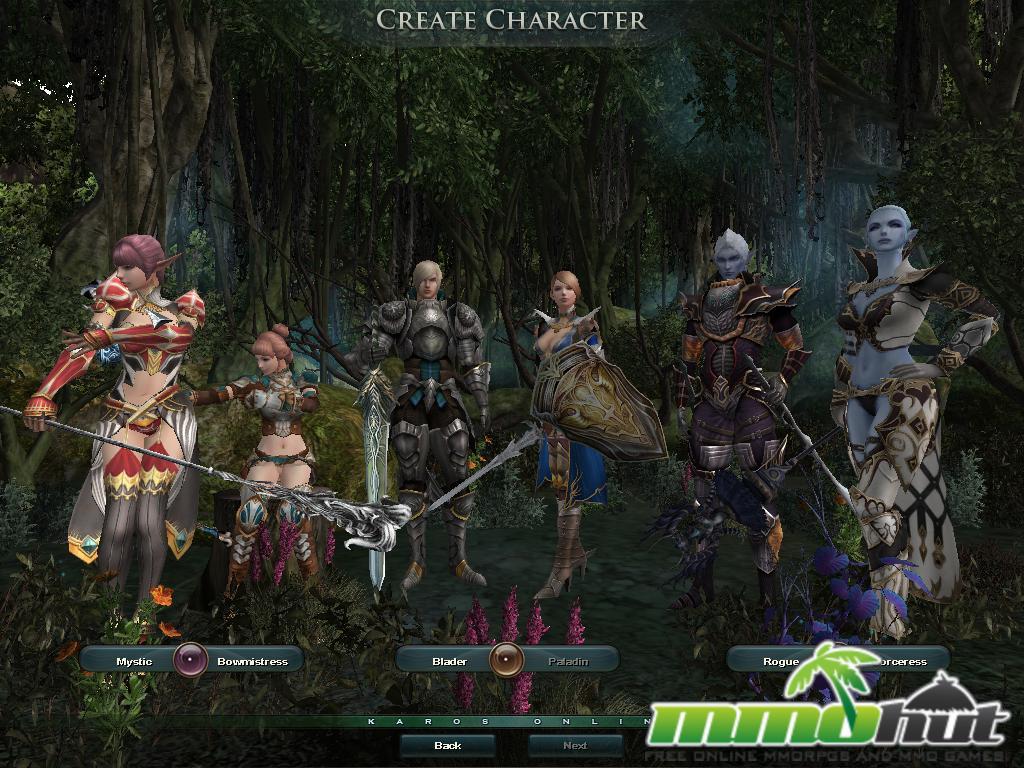 The core gameplay and combat mechanics in Karos Online don’t deviate much from the generic MMORPG formula found in games like Shaiya and Last Chaos. The only aspect of the game’s combat that deviates from most games is the pacing; combat feels a tad slow-paced in Karos Online. On the positive side, the progression system in Karos Online is quite unique and interesting. Players gain experience as they defeat enemies and complete quests, but they also gain ‘FP” or ‘Fletta point’. These fletta points increase independently from experience, as players can gain multiple FPs before leveling up once. The actual leveling system is fairly straightforward; every level yields slightly better stats and a single skill point. On the other hand, every “FP” can be used for one of two things. The main use for Fletta Points is to increase certain attributes. Some of the attributes that FP can be used to increase are Yang, Yin, Air, Fire, Wood, Earth and Water. For example, every FP point put into ‘water’ increases movement speed by 4%, while every point into Yang increases HP regeneration by 1. The fact that everyone is free to spend their FP points whichever way they like adds an interesting new layer of variety to Karos Online. Fletta Points can also be used to enhance equipment by bottling up FP and spending them on item enhancements.

The most important piece of advice I can give to anyone thinking about playing Karos Online is to complete as many quest as possible. Grinding away at monsters without any active quests is an enormous waste of time in this game; killing monsters yields an extremely small amount of experience. I remember when I was level 4, killing a level 3 enemy pushed me from 426/1680 to 436/1680 experience. At this rate I would need to kill 168 monsters to level up, and with the slow-paced combat, that would take a very long time. Completing quests on the other hand is really the only way to gain experience at a moderate rate. Handing in two simple ‘kill quests’ at level 4 brought me from 436/1680 to 1356/1680 experience. However, while experimenting, I did learn that grinding is an efficient method of gaining FP. Either way, the best way to progress is to complete quests, as in the process of completing a quest you’ll need to kill countless monsters anway, so you’ll gain both FP and XP. Oftentimes quests are repeatable as well, so make sure to do some of the more rewarding quests a few times.

One small gripe I have with Karos Online is that the game doesn’t start players off with nearly enough inventory space. The one starting bag everyone begins with only has twenty inventory slots. This may seem like a lot, but since every enemy seems to drop at least 3-4 different kinds of items (and quest items take up space), inventory can become scarce extremely fast. Personally, I found myself running to an NPC to unload my junk once every five minutes or so. The only way to gain more inventory space is to either purchase additional bags from another player or craft them yourself. Few players are willing to sell these bags, as they’re fairly difficult to craft, and the materials required to craft them aren’t common. 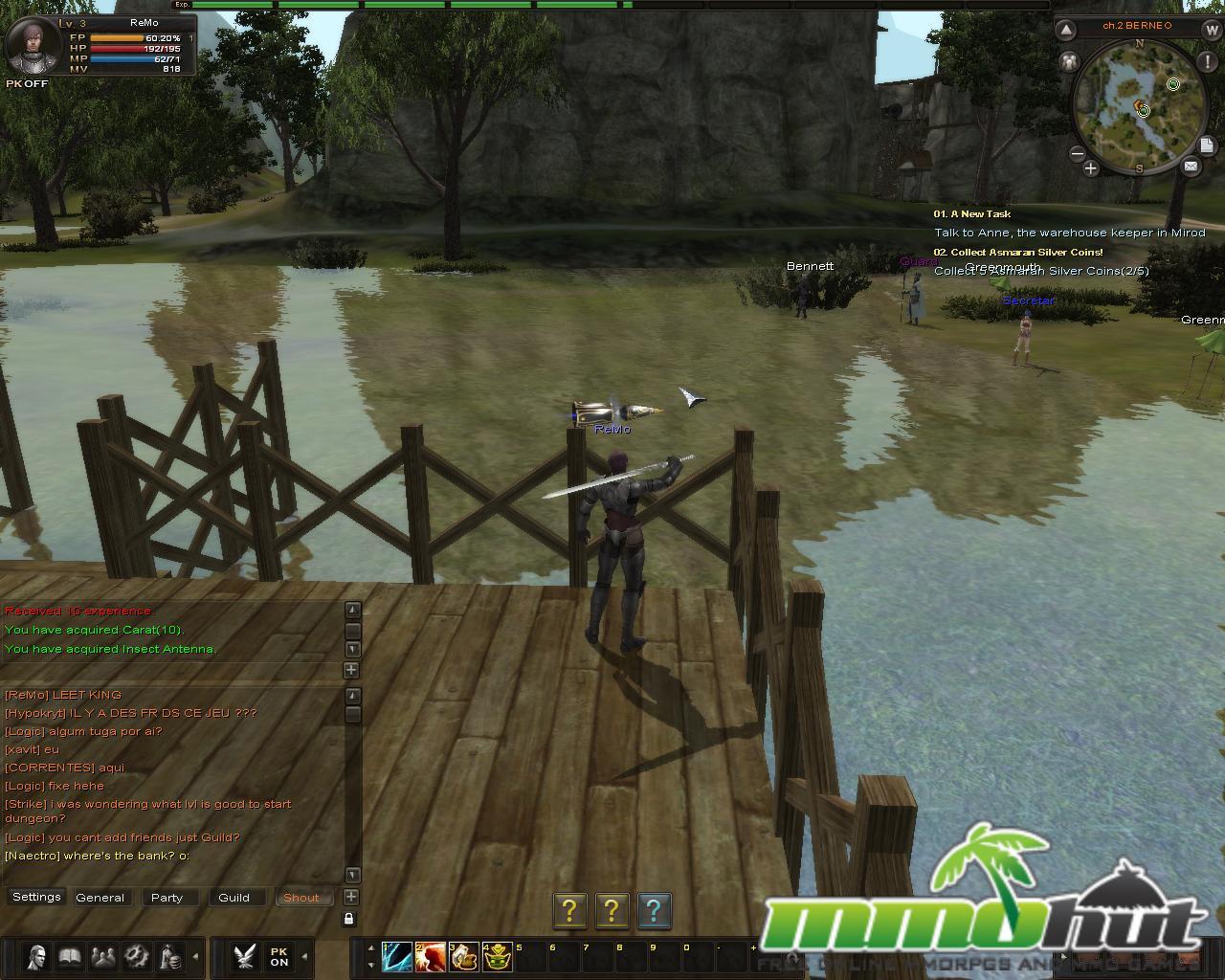 The two resource gathering skills in Karos Online are fishing and mining. Both of these skills have their own uses. Fishing is useful for obtaining the materials required to craft potions. Potions can be incredibly useful when exploring dungeons without a healer. Players can fish without actually being near their computer as well, making it well worth checking out. Mining, on the other hand, is primarily for crafting weapons and armor. Rare ores can are required to craft the best pieces of equipment. PvP in Karos Online is quite simple. Players can turn PK mode on or off at any time. While in PK mode, players can attack other players who are also in PK mode. Keep in mind, though; PvP is only available to those level 10+.

Perhaps one of Karos Online’s strongest points is its excellent interface. Just about everything from the experience bar, to the hotkey icons looks ‘sleek’ and modern. The map itself is also extremely helpful ; quest locations and quest monsters are clearly labeled, making it extremely difficult to ever get ‘lost’. The English translations are also unusually good. Most free-to-play MMOs tend to have a lot of broken English, but from my experience everything from quest and item descriptions have easy to understand and well-translated text.

Karos Online is an extremely polished fantasy MMORPG that offers many interesting features. The game’s gorgeous graphics, unique two-tiered progression system and many playable classes make it well worth checking out, but the game does little to push the genre forward. Anyone who has already played either Shaiya, Last Chaos or practically any other 3D Fantasy MMORPG won’t find much new in Karos. Combat is a bit slow-paced, and the game doesn’t have nearly as many ‘skills’ as it should, but despite this, Karos Online is still an overall solid fantasy MMORPG.