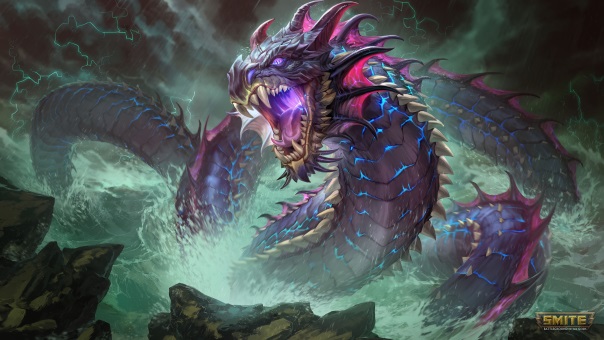 Jormungandr is one of the “fan-favorite” gods that we received this year – a part of SMITE’s dedication to bring those oft-requested gods to life in the game, which is very exciting. So when they announced that the herald of Ragnarok, the bringer of destruction, the mighty World Serpent would be playable, I couldn’t even fathom how that would work. He had to be absolutely immense – and he is! His body would never fit on screen, so it rolls around underground, a sinister rumble of ill-intent. I also want to say kudos to Kellen Goff who brought his lines to life in such an incredible way. Voice actors I don’t think get enough credit for how hard they work, and he really knocked this god right out of the damn park. Jormungandr is the bringer of end-times. He is calamity, catastrophe, he consumes the gods themselves without fear or hesitation. When Jormungandr roams the land, the seas will boil, the land will quake. Fire, famine and hopelessness await with the arrival of the World Serpent.

But he’s anything but “unbeatable”. His kit is a really interesting one, to be sure. It’s got plenty of power, and the ability to scare the absolute pants off of people with that massive serpent coming as close to “out of nowhere” as one can get. He’s such a unique god that Titan Forge had to come up with a new name for certain types of CC/Crowd Control, known as “Hard Displacement”. This means he cannot be banished, disarmed, grabbed, knocked up, knocked back, and several other types of CC. He receives something, in my opinion, altogether worse. While this does balance him out, it can put you into situations where Jormungandr feels powerless.

The best CC is the CC that puts you in the ground, and we’ll go over that soon. That said, his kit is absolutely fascinating, though I think it has a better use in matches that have lanes (Conquest, Joust, et cetera). I think he’s fun in Arena, and there’s a lot of potential, but I think he will shine far more when there’s nowhere to run from him but a straight line. His Basic Attack is also interesting, because it has a sort of timer, and is a nice wide cone. The longer he leaves it on, the slower and less useful it gets. Releasing the button will refill the speed at which he fires that breath weapon. The icon for this is on your screen (the coiled serpent near your abilities).

Jormungandr is a lot of fun, to be honest. I think he’s going to have some of that damage tuned down a little bit, but I think he’s missing something. Most Guardians have some kind of reliable peel to save their carries. Sure, he has a bit of knock-up and his daze, but that’s after a channel and requires far too much set-up, personally. This more than anything makes me think he’s going to be in the solo lane more than the duo lane. Why pick Jorm for his Daze when you can just grab Bacchus or Athena? His lane pressure is different than other support gods, and so the comp of the team and the strategy changes. Instead of just bulldozing people down with Stuns and Taunts, you play the long game. Flood the lane with Poison, bop them with his 3+2 when people get greedy, and wait for your Hunter to come. Or you can stun/snare/root people into the poison clouds and just free farm them. I can see Cupid and Artemis being a lot of fun for this, as well as Hou Yi. Slow and in a maze of poison? Time to pop shots! However, I highly recommend against going full damage Jormungandr. Sure, it might be okay if your jungler and solo laner are both tanky, but you’re going to likely just steal kills from your hunter, who will without a doubt resent you for this. I’d love to see how he fares in the mid-lane, but if the opposing mage is even remotely more mobile, you’re going to be in for a bad time. But I still think it would be fun in casual matches.

Everything Jormungandr has deals damage except his passive. He’s got nice huge puddles of AOE damage/slow, and the more of it there is, the stronger he can be. Which ultimately creates more opportunities for poison. It’s a vicious cycle, but a satisfying one. Everything in his kit feels fun, and feels rewarding, but it’s dangerous if you go in alone. That’s one of the big mistakes I make as Jormungandr, overestimating how tanky I am. Then the next thing I know I’ve been CCed and murdered, because we’re in a 4v2 (that’s being generous), and now I’m dead. Another thing to be aware of comes with his huge frame and camera angle. It can be very difficult to aim his 1 (Toxic Cloud) because you can’t see directly in front of you. I often find myself guessing and letting it go forward, hoping for the best at the same time. Would it make any difference if he became transparent during the aiming portion (for those who don’t smart/autocast)? I think it very well could, but I don’t know how easy that would be to implement.

As far as his abilities go, I tend to level 1 and 2 about evenly, but were I to pick a starting list, it would go 2->1->3->4. His 2 has the early lane pressure and can help push down waves of mobs and jungle packs. I think Jormangdr, like I said beore, would be a strong presence in the solo lane as well. He doesn’t really need a friend to deal damage, and he’s a threat simply by existing. That way you can put a hard-CC Guardian with your Hunter (or honestly, an Assassin. That’s super popular right now) and just mash that lane down for free. A lot of the Warriors you’ll find in the solo lane are mobile and that’s dangerous for Jormungandr, but I think if it’s a Guardian on Guardian fight, he’ll fare a little better. Unless it’s someone like Ymir or Sobek, who can pick/position him for a gank easily. I like the idea of Jormungandr in other positions, but I’d like more time to see how the meta grows around him. He’s very high-risk, high-reward with his passive punishing him for being Hard Displaced by taking more damage. I think my favorite combo for him is 4->3->2 and then bopping anyone who escapes with 1. I tend to hold my ult until I have all my cooldowns so I can use all three shots of my 4, burrow, chase someone down, or just reposition. Then I pop up, hit the 2 with all the poison nearby, empower myself, and just smash anything that happens to be near.

Gem. Of. Isolation. Get it. Get it. Seriously, buy that on him. It’s absolutely filthy. I put it in my Guardian builds too, but about third item in. I still need to be tanky to get the most use out of it. You know what I need to start buying on Guardians, him in particular? Gauntlet of Thebes. The reason I don’t to be honest, is it does not provide immediate protections – they have to wait until the item powers up. So for me, I tend to lean towards other aura items that immediately give me a defensive benefit. Pairing this with Void Stone gives me such joy. I receive Magical Protections, increase my overall damage, “and” I help my Mage with more damage output? Now that’s what I call an upside! As far as shoes go, Reinforced Shoes, Shoes of Focus, or (if you’re feeling belligerent) Shoes of the Magi are all sound picks. I don’t really buy direct damage items on Jormungandr, because frankly, he doesn’t need them. Would it be fun to get Bancroft’s on him, or some other Magical Lifesteal? Of course, and I can see the benefit. But I’d rather be a tower of defenses that my squad can rely on.

Another incredible item for Jormungandr is Oni Hunter’s Garb. It always seems like Jormungandr is in the middle of a group of people that don’t like him, or they’re always just in arm’s reach, if you will. There are lots of really sound items for Jormungandr. If you’re going to build damage items on him, there are two I recommend – Soul Reaver and Gem of Isolation. I recommend Gem of Isolation in every build though. Soul Reaver helps with shredding gods down, and if they have over 2000 health, bility bonus damage will scale up. This makes him a mid-to-late game bully, because by then everyone is in that ballpark. It’s not something I would rush though. If anything I’d rush Gauntlet or one of the Defensive Auras (Sovreignity/Heartward). Items that give CDR are also a must. You want to be spitting poison at a moment’s notice. He has so many nice picks that you really can’t go wrong. Though another “Secret OP” item for him is Celestial Legion Helm. It’s got a ton of stats on it, and bonus Physical Protection simply by existing. I see it being nerfed in the future, but for now, it’s wonderful.

Jormungandr is a lot of fun, and as the last real guardian we’ve received in a while, I’m happy with the presentation. I fear his damage is going to be lowered, but his weaknesses probably won’t be addressed anytime soon. Otherwise, I think he would be far too powerful. So while I’m not wild about all that extra potential damage, there are answers for it by simply being tanky and not falling for the “Hurr durr Mage Damage Jorm” idea. Can it work? Can he burst people into tiny bits? Sure he can! But that’s not your job as a guardian. It’s to be a shield for your team, to peel for the carries, and to secure kills. His peel is weaker than some of the other gods I’ll admit, but I love his playstyle, and I think he’s going to be a pretty popular god. Plus, it’s super satisfying to pop out of nowhere with his 3 and go “HURRGABLURGA SNAKE PARTY!!!” and suddenly everyone’s dead. There are so many gods that I think are going to be fun with Jormungandr. The Morrigan so you can have a big ol’ snake party, two people popping that insane ult at once.

Nox would be fun too, so she can enter him, he can disappear, and they both arrive at once. Loki is another fun choice. Basically, stealth gods in general, or gods that can hide are a hoot with this god. Also consider Odin, trapping people in a cage with already placed poison clouds. It is incredibly satisfying to bounce around on top of gods that have no choice but to take Jorm’s ultimate. Conversely, any god that can slow or chase him is going to be a nightmare to battle. A team of fast gods can just surround and pound poor Jormangdr. Another potential fun God If you want something exciting and fun, you’re going to get it with Jormungandr. It’s important for every god in a role to play and feel differently, and you get that with the first stealth guardian. I feel like Jormungandr has a nice balance of strengths and weaknesses. I am very curious to see his win-rate when he is available in Ranked Conquest though. Behold, the herald of the apocalypse: Jormungandr.