So we’re back in the waters of Lightmare Studio’s animated TCG, Infinity Wars, after nearly a year out from ApocaRUFF’s first look at the game. It seems that Lightmare Studios kept the game’s development tight over those twelve months, providing a noticeably more polished, balanced, and developed game than what we remember. 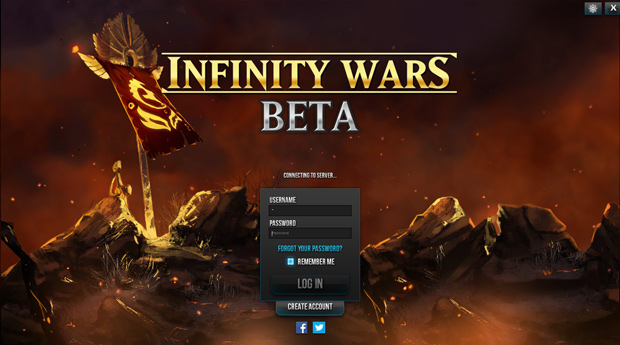 A Brief Look at the Past

So, to those who haven’t heard of the game or just stumbled into this review, here’s a brief rundown of what makes up Infinity Wars and how the game is played. 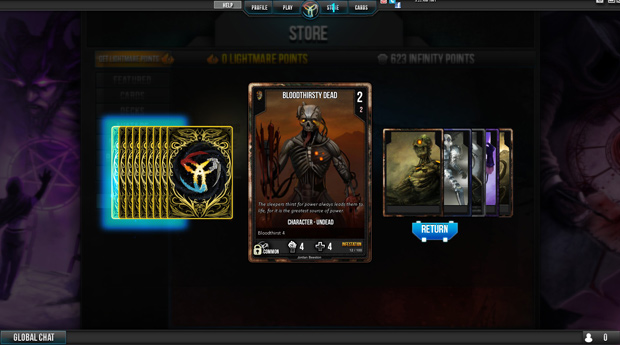 Infinity Wars follows the traditional TCG playstyle where you create decks from the game’s seven factions which are the Flame Dawn, Genesis Industries, The Warpath, The Cult of Verore, Descendants of the Dragon, Sleepers of the Avarrach and the Exiles. Being added to this is the Klingon and Federation as part of the Star Trek partnership that’s just recently been revealed. The field where you will be playing is segregated into zones which are namely the Defense, Attack, Support and Command Zones. 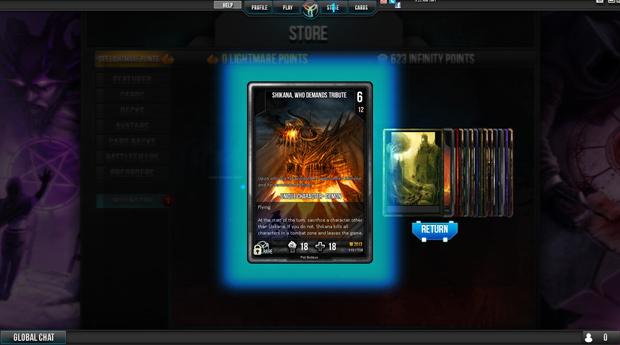 You start off with one resource at the beginning of the match that you can use. After each turn from there you’ll have your resources replenished while it increases 1 per turn. You’ll be using this resource to summon units from either your hand to the support field or from the commander field to either the attack or defense zones. 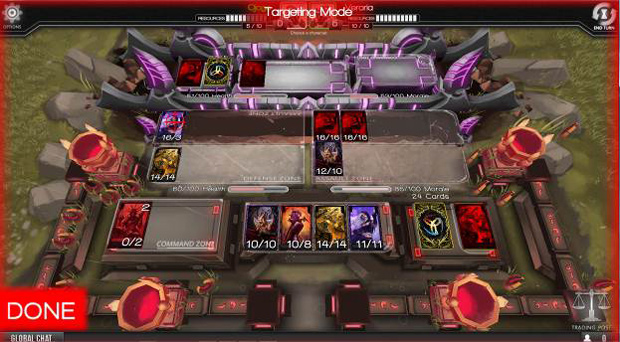 The defense and attack zones are the areas where your units will be actively participating in battles while the support and command zone contains your inactive units that you can place later in the field. Units you summon from your hand have to sit a turn out in the support zone unless they have a specific ability that says otherwise. However units from the commander zone can be put immediately either to the defense or attack zones without going through the support zone. The commander zone is almost the most defended and hard to impact zone on the playing field, making your choice of commander cards all the more important.

The commander zone cards are the special cards in the field that you can choose before any match. This allows you to choose those ace cards in your deck immediately without gambling in the hope that you draw them early. 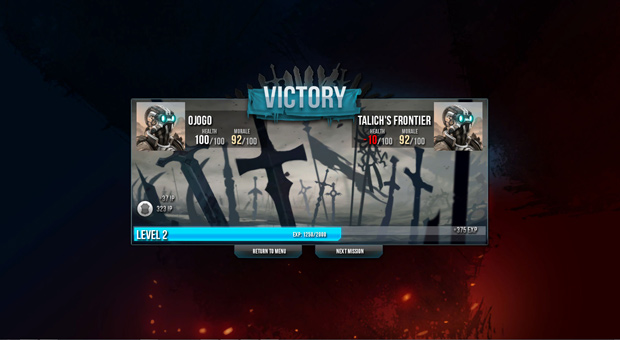 The game’s win condition is if the opposing player’s morale (a number reduced each time cards are destroyed) or HP is taken down to 0.

As I mentioned earlier, Infinity Wars looks better than ever. Lightmare Studios basically had the gameplay skeleton done in our earlier look into the game. The artwork is superb and constantly improving, and it’s pretty amusing to see the units come alive with in-game animation. 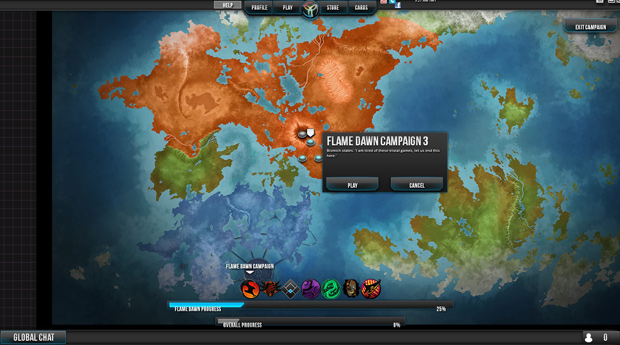 I loved the fluidity of the game’s GUI where no frame is wasted and no choppy transitions occur whenever my cursor rolls over to my field or my opponent’s. Much can be said however to the game’s interface in the main menu since there are moments when I transition between resolutions that the interface just blows up.

I love that Infinity Wars has a campaign mode included now since it allows you to acquire faction specific cards without shelling out a dime. I loved the fact that the game has this equilibrium between those who are playing for free and those who have kept on purchasing booster packs. You can in fact go toe-to-toe against players who have purchased booster packs even with the cards you get for free. 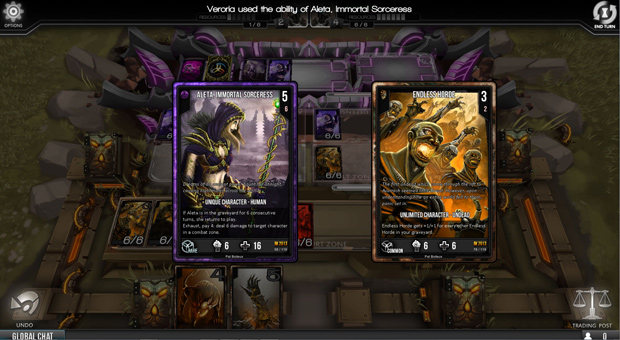 This “equilibrium” of sorts emphasizes on player skill/strategy over how much money one has invested in their cards. Since the free cards have pretty decent abilities to begin with, you won’t feel that you’ve been short-changed after coming away a battle where you faced an opponent packing a rare deck.
Given the somewhat hardcore tactics of the game, I applaud their decision to require newbies to go through the process of learning game mechanics while being rewarded with starter cards. This safe haven period helped me familiarize myself enough that my first PvP matches weren’t total blowouts. I’m sure veterans are grateful as well to have fewer “farming fodder” players filling the queues as well. Of course I really couldn’t discount that there are just dumb players out there, since no game can really find an effective measure to eliminate those kinds of players ever.

Beyond offering a location for players to freely acquire cards from a specific faction, the Campaign mode also offers an ideal setting to ease yourself into the tactics each faction specializes in. If you take proper notes of the cards frequently used in each campaign, you can ascertain the gameplay mechanics of each faction in-game without having to suffer repeated defeats while working out viable counters. 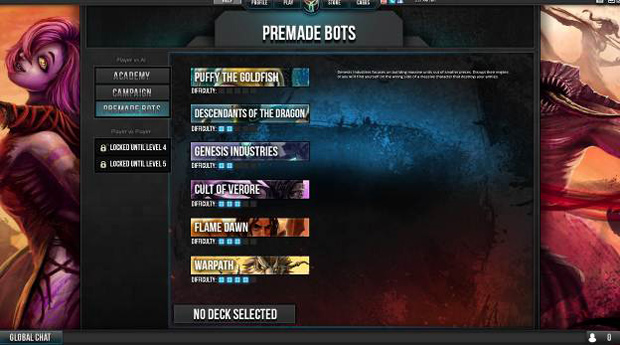 Each campaign stage provides you with a pre-constructed deck so you won’t have to go through the hoops of going to read every single, faction specific card out there to actually see them in action. This allows players to learn gameplay mechanics actively rather than via boring tutorials, again while preserving your PvP record.

What eTCG game (or TCG game for the matter) is worth its salt if it doesn’t offer a comprehensive and smooth deck building feature? In Infinity Wars, deck building is fun, fast and easy, and I’m not even referring to the interface just yet. Your deck’s factions are determined by the commanders you’ll be choosing so you have the option to either go solo, duo or tri-faction in the game. 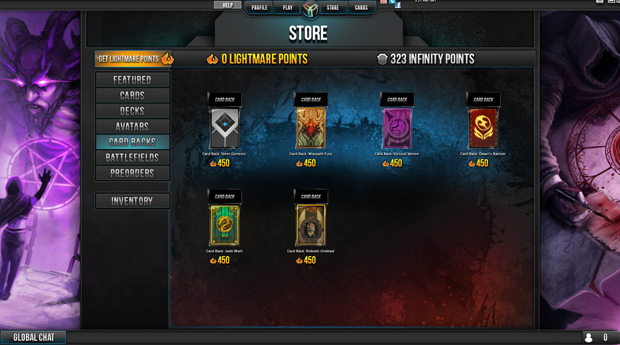 The game also has non-faction units that you can add into your decks to catch your opponents off guard from time to time. 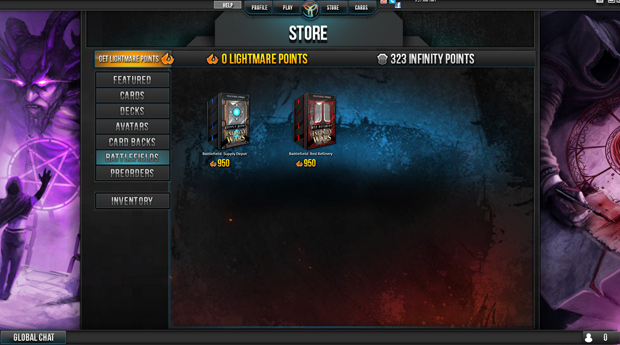 The Deck building interface on the other hand is pretty streamlined. Anyone with common sense can pick it up immediately. Creating a deck is easy enough using the game’s interface. The game also helps out in your deck balancing responsibilities by providing an overview of your cards, including how many character versus spell cards you have and the resource cost distribution of the deck as a whole. 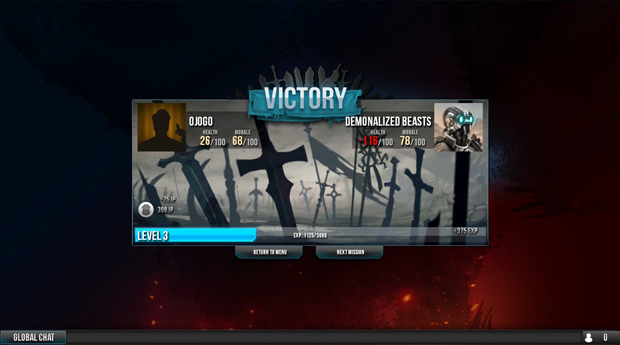 Overall, I would have to say that I pretty much enjoyed Infinity War as much as ApocaRUFF. As someone who has been grinding through countless TCG titles this year, Infinity Wars certainly makes the grade. 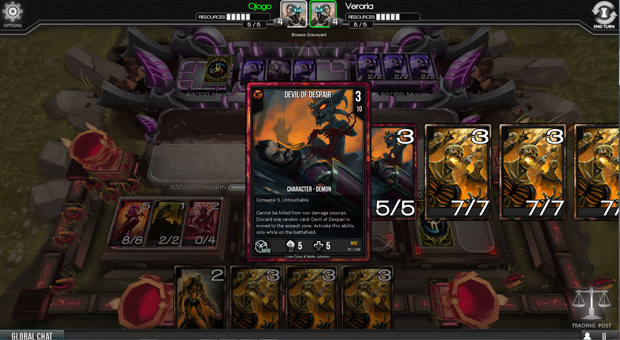 It’s easy to jump into but hard to master. Add the fact that you can enjoy the game without investing in needed starter decks is just icing on the cake.
I also like the fact that you can play the game across different platforms. You can play on both PC and Mac machines using the same account and having the same experience on both platforms. Meanwhile Lightmare is also busy at work with the iOS and Android versions of the game, both of which will be connected to your account and providing the same experience the PC/Mac versions would bring. Also, don’t worry, your cards are connected to your account so whatever you get via PC/Mac/iOS/Android/etc will be passed on to one another so you can play the game both on the dekstop/laptop or while on the go.
And to me, that’s the best icing in Infinity War’s cake since there are times that I prefer playing the game on my ipad than my PC. So try it and I’m sure you’ll definitely have fun!