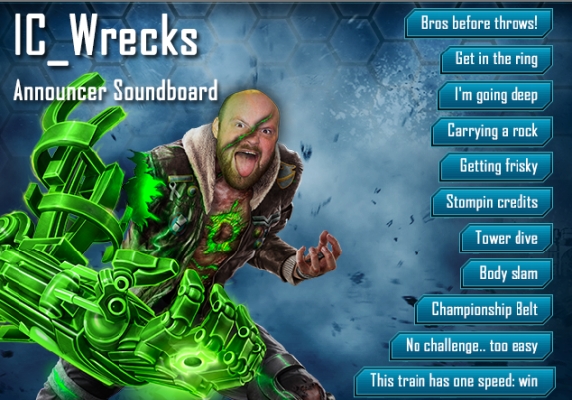 Turbine has released a new announcer pack for Infinite Crisis today: IC_Wrecks. Bring the pain in every match and let your enemies know you’re coming, on a train, and the only speed it has… is WIN.

IC_WRECKS came out of the Bleed. He was born from the Infinite Crisis, like a cosmic bodyslam through every universe and into the ring. No mortal being knows where and how he claimed his Championship Belt, but IC_WRECKS accepts any challenge to claim it from him. IC_WRECKS has never been defeated and never will be, so the belt has become part of him, and in order to take it you must suplex him back through the universes in the order in which he arrived, which is impossible, so just give up.

IC_WRECKS doesn’t need a role, yet he assigns everyone else theirs, BECAUSE NO ONE CAN STOP THIS TRAIN. Learn more here!