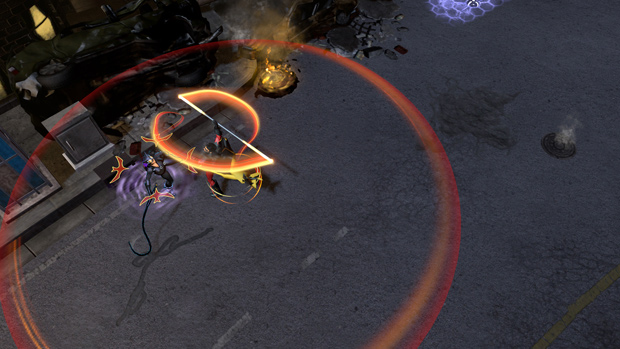 Have you ever wanted to play as your favorite superhero? Happen to be too swept up in the MOBA craze to dedicate the time to games like DCUO? Then Infinite Crisis might be the game you should delve into. In this free to play MOBA game, your favorite superheroes from the DC Comics are featured and then twisted in ways only the minds behind the Infinite Crisis arc could have imagined. Play Batman, Superman or perhaps a villain like the Joker in a frantic battle unlike any other.

I am just going to say it right off the bat, Infinite Crisis is a game that tries to get people to play this game by using characters many people including non-gamers are familiar with. And I am not saying this to sound negative about the game, but the marketing behind it is sound. Getting more gamers reading comics and more comic readers gaming is a good venture in my view. If you are unfamiliar to the MOBA genre, let me give you a brief explanation on how a MOBA game usually works.

In a multiplayer online battle arena (MOBA) you take the role of a hero, and together with other people in your team you will have to work together to either destroy or capture objectives while trying to crush the opposing team whenever they get in your way. The concept of the game is fairly simple and anyone can learn and play it in only a matter of minutes. The heroes you play as each have a special set of tools and skills that you can use to gain various attacks, cc, or movement buffs, to oversimplify it. For each kill, minion kill, or objective destroyed or capture you will earn money. With this money you will be able to buy items, and with these items your hero will get stronger. If you haven’t been living under an e-stone for the past few years, you should definitely be familiar with this genre, since it is the most successful genre at the moment. 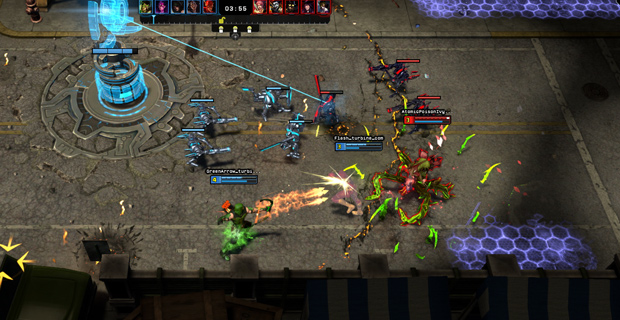 Since Infinite Crisis spins around villains and heroes, you should know what some of these characters can do, especially since the team behind this game tried to make these characters feel as real to the comics as possible. Everyone has 5 abilities and 4 of them are usually abilities that you can use that have some sort of special power. And I think Infinite Crisis captures these individual personas through visuals and skill sets that paint an overall picture showcasing their personal missions. Take for example the Joker. Straight off the bat you know that this is a champion that likes to fool around and trick people with vicious surprises. And his skills portray his personality well, particularly his signature delayed exploding present attack that goes off when enemies near its proximity. To avoid getting so serious, there’s a hefty bit of humor involved in Infinite Crisis to keep the skills feeling comical without disregarding the comics. And it feels to hit the middle mark right between what gamers and comic fans would expect. 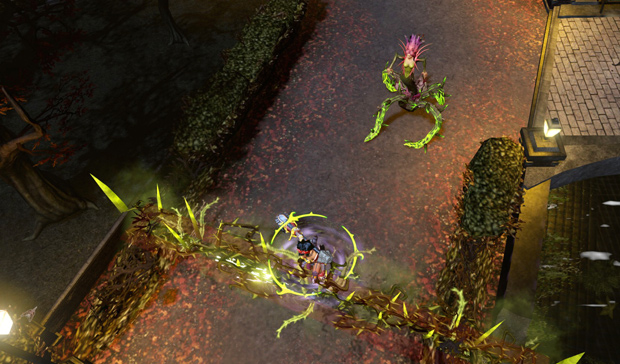 Currently there are three available maps that you can play on. On each one of these maps there are objects like cars that you as a hero can pick up and throw around. Since you are a champion you can use your heroic and villainous powers to cause real destruction to the world you are playing in, and you can tear down whole structures trying to bring down your enemies. I must admit that as a MOBA fan I was a little bit shocked to see the enemy Flash pick up a car, and throw it over towards me while I was just trying to focus on do my thing, i.e. killing him. The sheer destructive force of battles immerses you in the realm of the superhero fights we’ve all read and watched growing up, and separates this MOBA from others on the market.

Besides knowing your surroundings, and knowing who you are fighting against the most important thing is to know your champion. You will want to build him in the correct way with the money you earned from minions that are also known as drones. The items in Infinite Crisis are called artifacts, and there are three sorts of artifacts: Attack, Health and Power. Different artifacts scale better with different hero types, so some research is required to get the most out of each new hero or villain you pick up. Players not wanting to put in said time though can still get by decently with the recommended item list though.

Besides the destructible nature of the maps, the three modes available in Infinite Crisis stand out as rather unique. While the goal of eliminating enemies and gathering gold as fast as you can remain the focus, the way it plays out changes quite a bit. 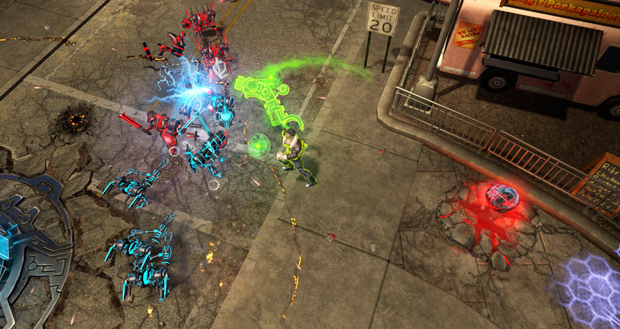 This map stands as that good bit of ‘comfort food’ to put more experienced moba players at ease. It consists of the usual three lanes plus “urban jungle” that you will have to duke it out with against the enemy team. In each one of these lanes you will find towers, these towers are your guardian angels in the early levels of the game that help prevent either side from getting bullied to harshly. Just like in other mobas, destroying them is key as they offer a hefty gold boost to your team. Each lane spawns endless waves of drones that push lanes and offer a source of income when not killing other heroes. Money buys you artifacts. It’s as simple as that. Between all the zones you will find the famous jungle, a neutral area filled with monsters offering income on a set respawn timer. Eventually one team will push all the way down a lane and destroy the Power Core to end the match.

If you are familiar with the map Dominion on League of Legends, then I do not need to explain Gotham Heights any further. This stands as the premier mode first revealed in Infinite Crisis though so it receives a bit more love in comparison to Dominion mode. In Gotham Heights you will find yourself on a big circle, with five different capture points scattered on the outer ring. In this map you will have to capture more than half the control points to earn more points than your enemy, simple as that. Gotham Heights essentially plays out as more of a team deathmatch, with group fights happening early and often. Smart players can turn the tides in their favor by utilizing various item pick-ups scattered around the arena such as health packs, speed boosts, and even special jungle monsters that drop buffs when defeated. Most of the map is clear of fog of war, but you can still set up ambushes by utilizing the shadowy central parts of the ring. Holding more capture points than your opponent will tick points away from their team score until one team runs out and is defeated.

This map is really interesting, and probably the most original map Infinite Crisis offers. Basically the map is a pentagon with two lanes; the make-up of each lane works akin to Gotham Divided in terms of turret placement and minion spawn. The jungle sets itself apart as a vast space between the lanes, ensuring roaming between lanes is a more costly and time consuming process. Beyond this, the possibility is there to have more than one dedicated jungler as there’s simply too much there for a single player to deal with effectively. This map is ideal for players that just want to focus on outplaying their laning opponent in a head to head battle as jungle ganking occurs less frequently here than any other mode. I personally didn’t enjoy this map as much since it took a lot of the rewards for map awareness and team coordination out of the genre, but that may just be from having too much experience on smaller moba maps to adjust my expectations.

The map overall finds cohesiveness when the Dooms Day Device activates, a central turret that forces players to come together for an epic team fight to acquire a type of satellite laser that can blast a huge area clear of any enemy players. It’s ideal for pushing heavily defended turtling foes out of lane long enough to take an objective, just hope that whoever on your team gets the device know what they are doing as it can easily be wasted. 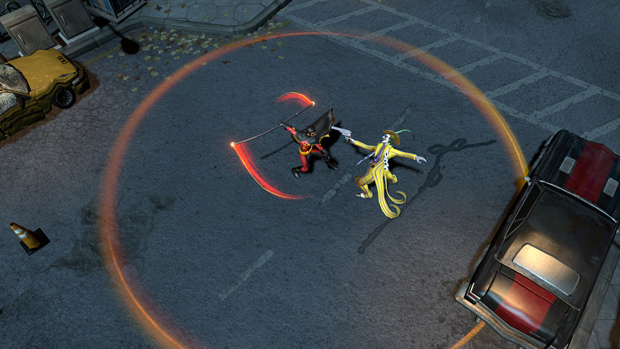 Playing as your favorite recognizable hero or villain added a new level of immersion to the moba genre I haven’t experienced elsewhere. Since playing as a character you are familiar with, you really get the ‘I am a hero’ feeling and want to show the enemy your special powers. But besides that Infinite Crisis tries to be even more different than many other MOBA games. But with the introduction of alternate reality heroes, roughly resembling the standard heroes but with unique steampunk and radioactive twists, the game not only expanded my knowledge of the DC Universe, but made me want to read more about these otherworldly versions of Batman and the Joker. 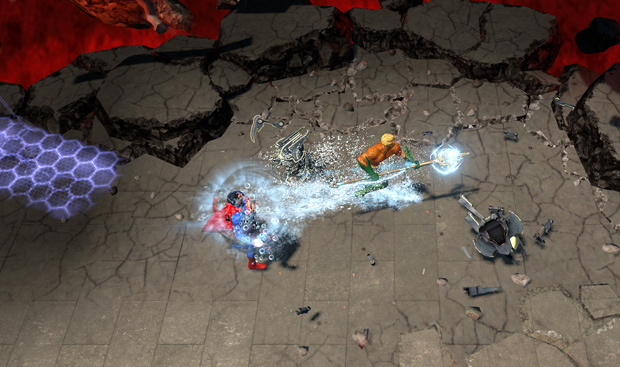 The more dynamic maps with fully destructible environments added new tactics that even a veteran moba player like myself was unable to immediately master. There’s certainly new strategies and ways of thinking about ganking here that should give that bit of “wow” factor to those bored with their current static moba. Unfortunately the game hasn’t caught on much in Europe, and my servers were a bit empty. This resulted in long queue times that could be a bit frustrating when I just wanted a fast match during short breaks. But if you don’t mind waiting a bit longer, and enjoy playing as a super hero or villain, you should definitely check out Infinite Crisis.