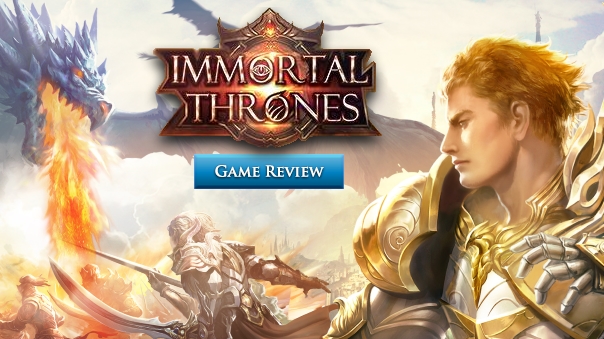 Immortal Thrones by Zloong has a whole lot going on under the hood. It has the technology to livestream, a global multi-kingdom war (Saturday through Friday. Sunday there’s a truce), several character classes with their own branching classes, six kingdoms to serve under, and absolute tons of combat. There’s cross-server action so you should never be lacking someone to pick a fight with if that’s what you’re after. But there’s just so much going on, that even close to two weeks later, I’m still trying to parse out everything there is to know about Immortal Thrones. The UI is incredibly busy and there are so many damn icons on it all the time. I’m grateful one of the bars can be hidden, at least. This is a world plagued by war, where the Gods of old walk among man. Zeus, Hades, Poseidon, I’ve encountered them and more! There are Angels from Judeo-Christian mythology, Norse, and Fallen Angels are among the crowd of “cards” you can collect.

At face value, this is a gorgeous MMO. There’s plenty of the standard mobile MMO stuff you’ve come to expect from these games: beautiful women with incredible cleavage, visually stunning landscapes, large clumps of enemies, conveniently close together for AOE attacks. I’ve spent a couple of weeks playing this though, and I’m still trying to figure it out. I do know that there are lots of demons and other vile forces out there, sowing discontent between Gods, and it’s up to you to stop them. You know, I figure Gabriel the Archangel could probably do that himself, with the cool flaming sword, but nope. It’s your job! I do know that you will never be without something to do though! It doesn’t really matter which of these Kingdoms you pick, but they are at war with each other. If you’re playing with real life/online friends, try to pick the same Kingdom, yeah? But let’s start at the beginning, with character classes and factions!

More Gods than you can shake a stick at.

There’s no “background” on these Kingdoms in the character creation screen, but the names all kind of feel familiar. You have Aquila (Blue), Ursaria (Red), Canisios (Green), Leonia (Orange/Brown), Tauriton (Grey), Serpenia (Purple). So pick the animal/color that you like, or whomever you think is/will be the strongest, because that’s the Kingdom you will fight for. Each faction has its own Nobility (King, Queen, Premier, Marquis, Duke, Imperator, Guard Captain, Butler) made up of players. Those in charge of your faction will decide who you are at war with when you enter PVP. However, I have no idea how you enter those ranks because it doesn’t seem to be very clear. My only estimation is that it’s based on your “Glory” in PVP. But there are already people with almost 400k glory, so that makes me wonder if it’s botting or just very serious dedication to being on top. Ultimately though, it’s up to you where you want to serve. However, there are two “War” state:. State War and Global Battlefield. If you’re level 36 or above, states who have common enemies can do battle. In Dual Mode, only neighboring states can be declared war on, and EXP, honor, Equipment and more are given to the winners (and players who score lots of kills). In this State Mode, you fight for honor and for your state. In Global Battlefield is a more territorial campaign, unlocked at level 30. This is the mode where your King declares a foe, and it’s up to the player to utilize military strategy, create alliances and offers way more challenge and excitement. Not to mention the temptation of winning a city to control! This is the most interesting part of the game, and if you’re into PVP, and acquiring potentially great rewards for it, this is where you’ll want to spend your time. But there are also dungeons, solo challenges, tons and tons of quests to undertake on top of that.

The standard single player experience is just that – standard. You’ll auto-pilot your way from quest objective to quest objective, increase the power of your skills with coins (or with skill books), kill monsters, grumble about an overflowing inventory. You can increase the power of your equipment (and in fact, I’ve only ever replaced my weapon/shield so far, and most of those were just absorbed into the current one I had), and have not come close to running out of coins. I’m still not entirely sure what the main story is, other than that I’ve never seen this many Gods in one place since SMITE. I just know I’m traveling a very scenic land, kicking the stuffing out of every evil-looking creature I come across. But how do you figure out just how strong you are? That’s your CP rating and it’s underneath your level on the main screen (level cap of 70). What gets you CP? Everything it seems! Upgrading gear, leveling up, powering up your wings, and the Pantheon cards. All those Gods I mentioned before? You collect them in card format, and they are divided into a bevy of Pantheons. You unlock them through leveling up, quests, storylines, and as you unlock more of them, you gain stats and power.

When the flashy powers aren't going off, combat is gorgeous and lovely to behold.

There’s lots of content though. There are Epic Dungeons, which are solo content. They have three difficulties, ranging from Easy to Hell, and have their own rewards, and you do battle with mythic entities such as Prometheus, Zeus and more. They were pretty easy to get through, even in Hell, and the rewards are certainly worth going after. You’ll receive items useful in increasing the power of your equipment, so yes. Do them! You need every point of CP you can get. There are also dungeons specifically to get Gold/Exp, and you have a limited number of attempts per day (Sacred Realm and Gnome Lair). 500,000 EXP (at least) is nothing to sneeze at, and you can Blitz it for free, instead of simply running the dungeon. There’s also the Arena, where you do battle with other players for honor and rewards! It’s standard 1v1 mobile MMO Arena. You pick an opponent, and enter the battle! A Then you have content like the Tower of Courage, where you enter battle against waves of enemies within a time limit and each stage has a recommended CP (your power rating), which reminds me a lot of Lineage 2: Revolution’s Tower. The higher you go, the greater your rewards. Tower of Courage also gives you “Plumes” for winning, which go into upgrading your wings. Increasing the strength of your wings also gives CP. You use the Plumes to increase stats: Max HP, MATK, PDEF, MDEF at least, for Knight. So it does behoove well of you to find ways to acquire Plumes, to give you even more CP, and increase your own Wing CP (which is a different stat altogether. But my problem with this is this: Sure, the Wings look awesome. Sure, it’s a nice touch and another way to min-max (the real goal of any good mobile MMO), but I’ve yet to fly anywhere! I still use a damn horse! It’s a cool horse, but what’s the point of having wings, when I don’t fly?

The Sabbath is important, so sayeth this guy. Whoever he is.

Immortal Thrones is a fun, solid mobile MMORPG. It has a pretty unique PVP system, with the Six Kingdoms all vying for land and power. But I wonder what’s going to happen if one kingdom simply overthrows all the others. Can that happen? Will it happen? I can’t help but wonder! I’m not entirely sure what the end-goal of the game is, and that’s a problem. But everything about the game is good and enjoyable. There are a whole host of options to min-max and increase your overall CP, which is the real honest goal of any mobile MMO. You can also use coins/Diamonds (real money currency) once a day to gain exp from being inactive. It’s like .. catch-up exp. Everything about the game is good, but it doesn’t stand out other than PVP. It’s beautiful, engaging, and you cannot possibly run out of stuff to do. I just think it needs a little direction and a little more explanation. It does explain to you when a new system is added, Immortal Thrones is a fun, delightful distraction and will constantly challenge you to find new ways to min-max your character to become as strong as possible in this war-torn world. And it doesn’t seem to be pay-to-win at all. I saw nothing in the shops that made me better.  That is always a positive in my eyes. If you’re a fan of exciting PVP and climbing a ladder to gain glory, fame, and honor, this is the game for you.