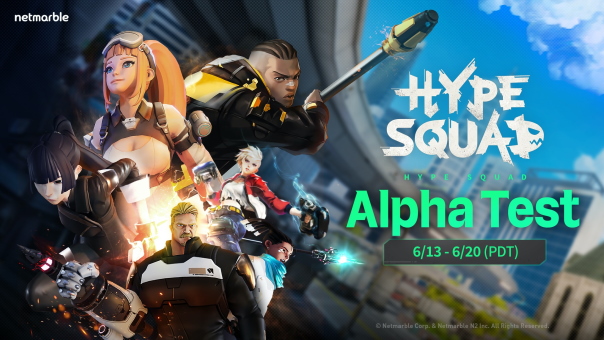 Netmarble, a leading developer and publisher of high-quality gaming experiences, has announced an alpha test for HypeSquad, the company’s Windows PC Battle Royale TPS for Steam, from June 13 through June 20. Now until June 20, players can pre-register on the game’s official website.

During the alpha test period, players will battle it out on a new map called Cagliostro featuring two game modes:

In addition to experiencing never-before-seen “Special Event Modes”, players will receive a Ride Skin reward upon joining the alpha test. This special item will be given to all players who participated in the testing period which can be used upon the game’s official launch. The alpha test will be supported in 9 languages including English, Portuguese, French, German and Spanish and multiple servers are located around the world including North America, Korea, Singapore, Brazil and Germany.

HypeSquad is a fast paced game where players teaming up to survive in intense and creative close-quarters combat. Featuring a variety of weapons and augmenters, players can creatively personalize their combat style in order to lead their squad to victory.

The game features a diverse cast of characters, each with different backgrounds and motivations, and an assortment of unique melee and ranged options that players can choose for multiple weapon combinations. There are also several items and upgrades awaiting players on the field to boost their performance, including support items and augmenters. Lastly, HypeSquad’s interactive objects, like zip lines and jump pads among other objects, add a layer of strategy for players to consider as they strive to be victorious on the battlefield.