How to Play Magic: The Gathering for Beginners (MTG Arena) 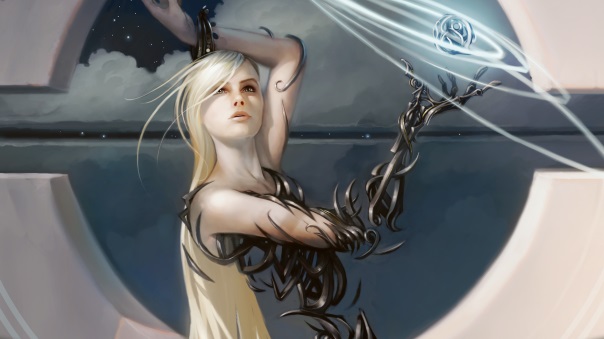 Magic: the Gathering seems like an incredibly daunting game to get into – after all there are thousands of cards, five colors, a constantly changing Standard Meta, it can all be a lot to take in for someone who has genuinely never played the game. While MTG can be an expensive game to get into, in terms of competing at Friday Night Magic and other tournaments (tournaments held at card shops in your local area), there are other options to learn and grow in Magic the Gathering that can easily shift your eyes to the paper release. The biggest of these are Magic the Gathering Online and the newer of the two products, Magic: the Gathering Arena. As someone who has played both, I personally prefer Magic: the Gathering Arena with its Wildcard System as a method of acquiring cards to complete a deck (trade a Wildcard for any card of that rarity on a one-for-one-basis). For those that want to see the game in action, feel free to click the link below for a playlist of my Topdeck Tutor videos, where I go into deck builds, strategies, and in-game commentary.

The ultimate goal in MTG is to reduce your opponent’s life points to 0, and both players start with 20. This is done during the Attack Step with creatures, or by casting spells on them from your hand. Each player will have a deck of about 60 cards, with 45 being the minimum. There are times when you’ll have more – EG: specific deck types that require 100-200 cards, or certain formats, such as Commander. But our focus will be Standard, which is what you’ll see in Magic the Gathering Arena.

There’s a lot that goes into making a tournament ready or successfully competitive deck. There are five colors of Magic cards, as well as multi-colored cards, and colorless cards (artifacts typically). Artifacts can be put in any deck, provided you have the right land to cast them. Many are colorless (you can tap any kind of land for them), but there are plenty with specific costs. Let’s go over that “color” and “cost” part. There are five colors: Red, Green, White, Black, and Blue. These have their own Basic Lands: Mountains, Forests, Plains, Swamps, and Islands. If you’re playing on Arena, once you have put cards in the deck editor, it will advise what Basic Lands to put in the deck, based on how many colors you are using. 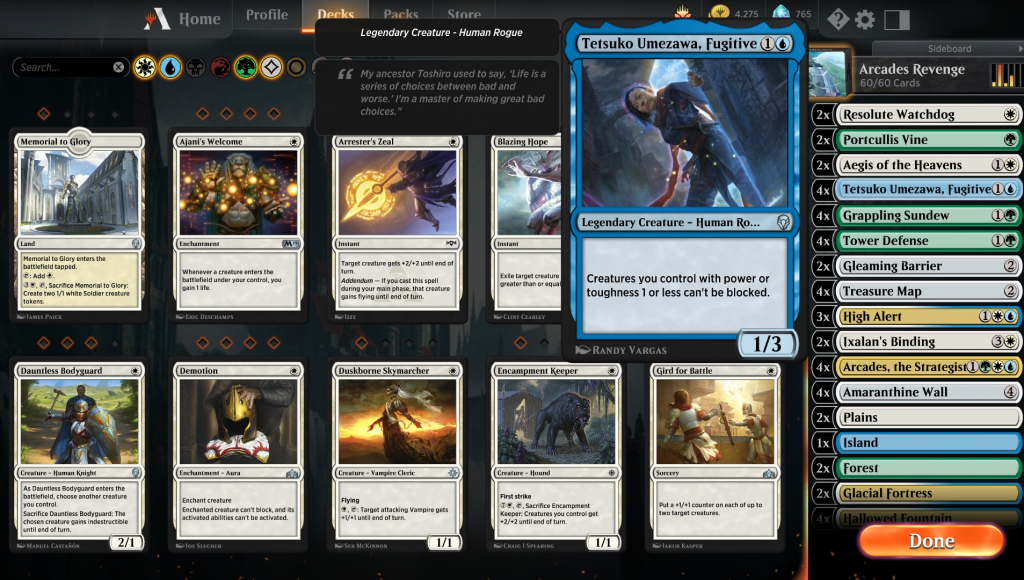 Each deck will consist of 1-5 colors, creatures, sorceries, instants, lands and potentially artifacts/Planeswalkers. For players who are new, I highly recommend playing with some of the pre-constructed decks in Magic: the Gathering Arena, since it is free-to-play. This will give you a great idea of what styles of cards synergize together right now. These aren’t ultra-powerful decks, but with some time and research, you can really take these, and make them your own (or re-build them in your image). One to Two colors is easy enough to manage, but the current meta also has a lot of three colored decks. These have a variety of names attached to them, which I’ll link here for easy access. The next step, before you actually start slapping your own deck together, is asking what colors are known for what. This can help develop your playstyle.

White: Purity and Life. Angels, Human Soldiers, Knights, low-cost creatures that are quick to flood the board. Fairly aggressive, and while the human creatures are not often very powerful on their own, they work well together, and tying them with Angels can really turn the game around. Life gain and card draw are popular in these decks.

Red: Chaos, Fire, Direct Damage. Goblins, Dragons, Lizardfolk. This is “the” aggro color. One of the most common tropes is “Red Deck Wins”, where you play a ton of low-cost, aggressive creatures with Haste (can attack when they hit the field), and instant/sorceries that deal damage. Great fun with Blue for Counters, and White for lots of aggressive plays.

Green: Nature and Serenity. Elves, Beasts of Nature, forces of the woodlands. Many of the creatures in Green are massive, but high cost. Green has lots of ways to ramp lands onto the board and card draw. Red and Green are very popular right now, but so is Green/Black and Green/White.

Black: Death and Undeath. Black isn’t afraid to use your health pool as a resource. Lots of zombies, skeletons, zombie dragons, demons, and other unholy images. Discard, big damage, pairs well with hard control abilities (counterspells) from Blue, and White for Vampires. 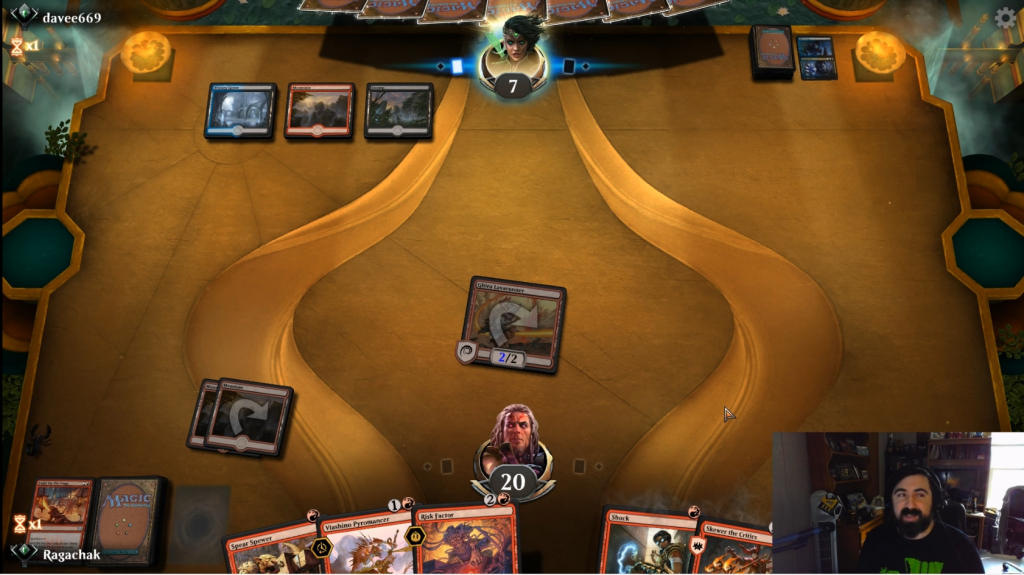 And here's what Red Deck Wins looks like in action.

Each card that has a cost will have a number and often an image in the top right. Each color-coded image requires one mana of that type, and the gray-circled numbers will require that number of mana, but any type. Each Basic Land produces one Mana, but there are cards that increase that, as well as creatures that can be tapped for Mana. Tapping means you turn the card to the side and declare you’ve activated/tapped it. That puts the Mana for it in the “Mana Pool”, which will stay there for the duration of the current turn phase. You’ll want a variety of cards in your deck too, from creatures, instants, sorceries, lands, enchantments, and artifacts. Some decks are risky/fancy and choose to not run creatures, but I don’t recommend that without some time in the game. A card’s color indicates what mana-type it will use, but there are also gold cards: this is for cards requiring multiple mana types, and cards that are half one color/half another, for cards that can use either/or mana indicated.

Creatures: These are played on your side of the field, and are one of the main sources of damage/defense. They have two numbers on the bottom right. The first is Power (Damage), the second being Toughness (Health). If its health is reduced to zero, it dies. They also tend to have a variety of special powers that can be activated.
Instants: Spells that can be played in response to other spells/abilities. Often interrupts/counterspells, they can also deal damage, save creatures and much more. These can be played during combat as well, while sorceries can only be played during main phases.
Sorceries: Sorceries are spells like Instants, but can only be played during Main Phase 1 and 2. These are more direct actions, such as destroying a creature, exiling things off the field, dealing damage and drawing cards.
Enchantments: Enchantments are permanent spells that reside on the field and have effects that can either be activated with Mana or constantly go into effect. They can be destroyed with certain instants/sorceries/abilities, but otherwise, they stay until stated otherwise.
Artifacts: These are usually colored gray, and also come in equippable formats such as weapons. There are also artifact creatures that work like regular creatures.
Planeswalkers: Planeswalkers can be attacked by creatures, and are played on your side of the board. Their “Loyalty” counter is in the bottom right and is their HP. This also determines their abilities that can be used. Each Planeswalker has a set of abilities that either raise or lower this number. When Loyalty hits 0, it dies. These are typically “must-target” cards, as they have game-shaking potential.
Lands: Lands typically provide mana, but can have other very interesting effects.

There are ways to make these incredibly complicated, but we’ll go into that another time.

Main Phase: This is when you can play your one land a turn, cast creatures, or Sorcery cards.

Combat:
Declare Attackers: Pick which creatures if any you will attack with, and if any will attack Planeswalker Cards.
Opponent Declares Blockers: Opponent chooses who will block what (as applicable) and choose what order creatures are blocked, in the case of multiple blockers on one creature.
Combat Damage: Damage is dealt. First Strike damage is doled out first.

Main Phase 2: If you did not play a land in Main Phase 1, you can now. You can cast sorceries and creatures as well.

End: Creatures Heal that did not die, and you pass the turn. Instants can also be cast during this step. 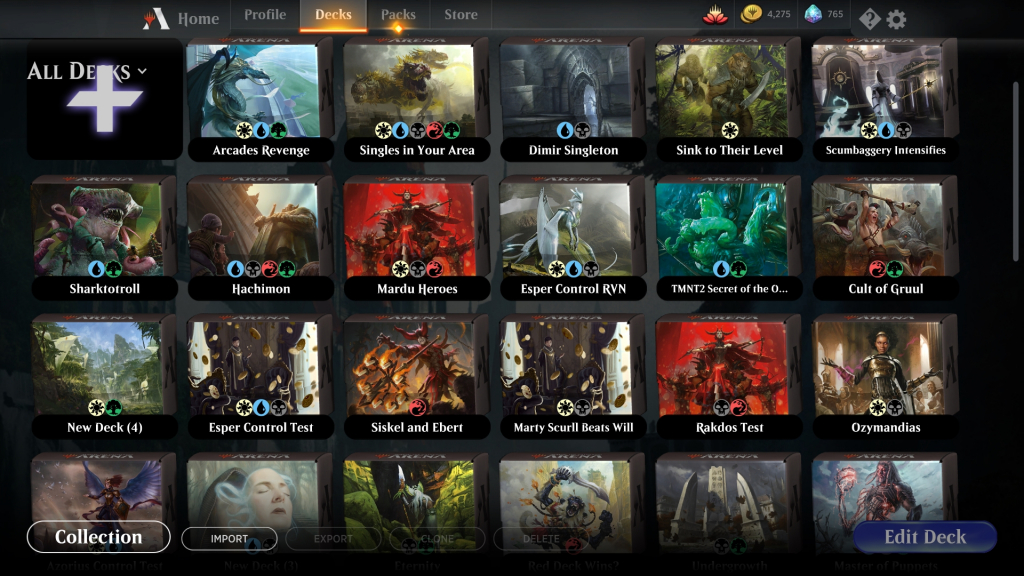 One of the major benefits to MTG Arena - Not having to take cards out of decks and put them into new ones.

Players start with 7 cards, but can Mulligan (redraw), but take one fewer card every time. The actual turn-taking process is very easy, and Magic: the Gathering Arena simplifies a lot of it.  Cards that have abilities that proc will do so, and when you see a card that’s glowing, it means you can interact with it (It has an ability, you can cast it, et cetera). I’m simplifying this, because Magic is a very complex game, and one of the things that makes it so fantastic is how incredibly complex it is. Your basic turns will consist of drawing a card, playing your land for a turn, playing the right creature, and attacking if you can. Most creatures have Summoning Sickness and can’t attack when they arrive. Haste is the exception to this, but that’s another of the more complicated features of MTG Arena. When you can attack, you declare that you’re attacking a particular player, tapping the creatures (unless they have Vigilance), and watching who blocks what. Damage is dealt, then you can do cast more sorceries and creatures. One popular tactic is to hold your Sorceries and Creatures until second Main Phase. During combat, your opponent can play certain spells (as can you), and may tap all of their usable mana in that time. Since creatures and spells can be countered if they have the spells to do so, the idea is that you wait for them to not have an answer, “then” cast. But that’s a more advanced tactic.

This is just the beginning for Magic: the Gathering! I’m going to go into further detail on things like Card Traits, Deckbuilding and Formats in the future. Do you play MTG and want to give advice to newcomers? Feel free to sound off below!