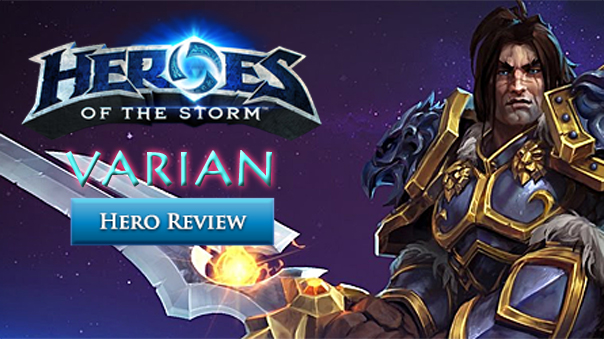 Heroes of the Storm sets itself apart from other MOBA and ARTS games on the market by taking a different approach at the genre. Traditionally, this genre would pit heroes five against five on one map with one objective; destroy the enemy’s base. Surprisingly, this simple objective can lead to thousands upon thousands of hours being sunk into the game as players slowly master the game and experience each match as if it was a completely new game. HoTS takes this a step further by also offering additional map objectives across multiples battlegrounds. Additionally, to make sure there is always new content for players, Blizzard pumps out heroes at the insane rate of one release every month (sometimes more). Once again, another month has gone by and another hero joins the ranks of the Heroes of the Storm roster. Read on to learn more about Varian, the High King of the Alliance.

A great leader is one who does not put himself above his followers. Instead, he (or she) leads by example and works to serve his followers. Varian was never one to back down from a difficult task or shy away from the front lines. He picks up his sword and shield to defend the Alliance, Azeroth, and now… The Nexus. Heroes in Heroes of the Storm are usually classified as Warriors, Assassins, Specialist, or Support. Varian is a bit special as he is a multiclass hero that can function as both a Warrior or Assassin. Blizzard continues to push the idea of talent choices having tradeoffs by letting players themselves decide: Do I want to sacrifice my survivability for damage or do I want to be able to soak up damage while dishing out none? These choices allow this hero to fulfill multiple roles and change his playstyle depending on the flow of the game.

Continuing with the multiclass theme, all of Varians abilities serve their purpose in both offensive and defensive situations. Lion’s Fang (Q) creates a shockwave traveling in a straight line which both deals damage and slows down enemies. This ability is great for chasing down enemies but also great when trying to kite enemies or fleeing. It deals decent damage to creep waves as well and does not cost much mana; feel free to spam it for free damage during the laning phase as it is your only way of dealing damage from afar.

Parry (W) negates all incoming basic attacks for a small duration. This ability will mostly be used defensively but can work in offensive situations to bait out enemy attacks. A talent also gives you the option to allow parrying of all types of damage – not just basic attacks. Not much to say about this ability, just time it right and you can negate the effects of even some high cooldown attacks. I personally do not go for the talent allowing all damage to be blocked, but it can work during some matches where it is essential to block large enemy nukes.

Let’s not get too greedy now…

Varian’s third ability, Charge, charges towards the target enemy dealing damage and slowing them down. This is a great ability to close the distance to face off with your enemy. Additional talents will also allow this ability to stun for a short duration – I highly recommend this talent as more stuns are always good.

The abilities we have seen so far do a good job at getting you in and out of battle and keeping you alive. While they do deal decent damage, most of Varian’s damage will come from his passive and heroics, if you decide to go for the offensive assassin build. Heroic Strike causes your attacks to deal bonus damage after a short cool down. This cooldown is reduced as you attack – essentially making Heroic Strike serve as bonus damage for successive attacks. Heroic Strike can work great as harass damage during the laning phase if you can time when you poke at your enemies. If Heroic Strike is about to come up, why not use it against an enemy hero? This can be quite dangerous and tricky depending on your opponents though and may only work against very aggressive heroes.

At level 10, you are presented with not just two but three options. Taunt forces a target to attack Varian for a short duration while also passively granting additional health at the cost of attack speed. Colossus Smash deals massive damage and causes the target to become vulnerable. It also passively increases base damage at the cost of your health pool. Finally, Twin Blades of Fury is a passive ability, also available at level 10, in place of your active Heroics. This passive causes Heroic Strikes to occur much more frequently, increases your attack speed, and provides bonus movement speed after attacking, but lowers your base damage.

Aside from selecting your talents strategically, the choice you make at level 10 will help forge your path as either an Assassin or Warrior. I enjoyed playing as an offensive Varian – charging into the faces of enemies and melting them with your Twin Blades and Heroic Strikes feels amazing. That or I’m just lazy and love passive abilities… Depending on your playstyle and the flow of the game, certain talents may make more sense over others. Normally you will want to pick one style and stick with it for the game – going half tank, half assassin, may not work well in the end.

Varian is deadly in 1v1 situations

Conclusion: An Enjoyable Addition to the HoTS Roster

Normally I tend to stay away from melee heroes as I love to stay back and poke at enemies from afar. However, Varian has proven to be quite enjoyable. There is just something about being able to deal good damage with simple abilities and a blade. Flashy spells and massive nukes are cool and all but sometimes nothing beats simply cutting down your enemies with sword and shield.

Both Heroes of the Storm and Overwatch are featuring the Nexus Challenge which encourages players to play both games with friends and premade parties. I am always emphasizing how much better online games are with people you know. Now is the best time to try it out for yourself and be awarded in the process. Overwatch may not be free but you don’t have any excuses when it comes to Heroes of the Storm! Jump right into the game with some friends and check out Varian for yourselves!