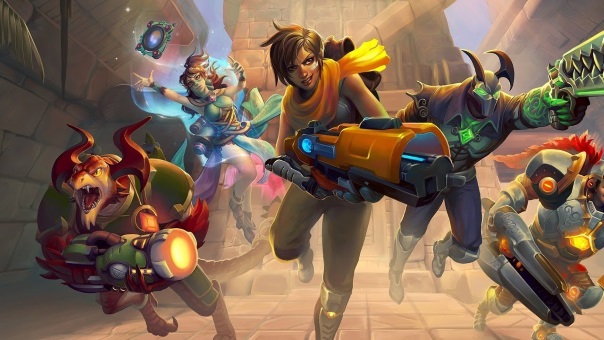 Today, I’m going to ruffle some feathers I imagine. This one will be a bit shorter than normal, but I’m going to talk briefly about Cards Unbound primarily. I know it’s getting a lot of flak and negative attention about the possibility of quickplay becoming P2W, but hear me out.  Also, I don’t think it’s a perfect system, please be aware of that too. I actually don’t have any real SMITE news this week, and just focusing on OB64. The only big thing for SMITE that I saw was the changes to level requirements for modes, which I love, by the way. Friday, we’ll know more I believe. Let’s try and be positive.

Okay, so it’s been a pretty venomous week. I had the nerve to play the Paladins PTS on Bottom Tier recently and felt only a minor bit of the backlash that I believe the Hirez Devs/Community Team has felt. I understand being upset about a system that you feel/deem to be unfair. But that’s no reason to flame, threaten and belittle the messengers. The community team for Paladins has no doubt seen an absolute slew of harassment. As an aside, yes, it’s their job to receive feedback. But it’s not their job to be dumped on because you aren’t happy. They’re still people, so let’s try and remember that. I’ve seen some of it first-hand, even on non-related posts to OB64. I get it. There are some problems with the system. But this shows me that the Internet at large has no idea how to give feedback. Simply saying “This is bad” or “This is P2W” or “I hope your house gets set on fire you dirty fucking scumbag” is not feedback. That’s being a jackass.  So, I’m going to help you out. The way you give feedback is by being polite, concise. You inform the proper people why it’s bad to you. You have to give information that’s pertinent. How many chests did you open and get nothing useful? What are some ways they could keep the system and make it less frustrating? I mean, one of the things I suggested was to have the Champion Chests let you unlock them through gold/vip points, so you could get cards however you like. 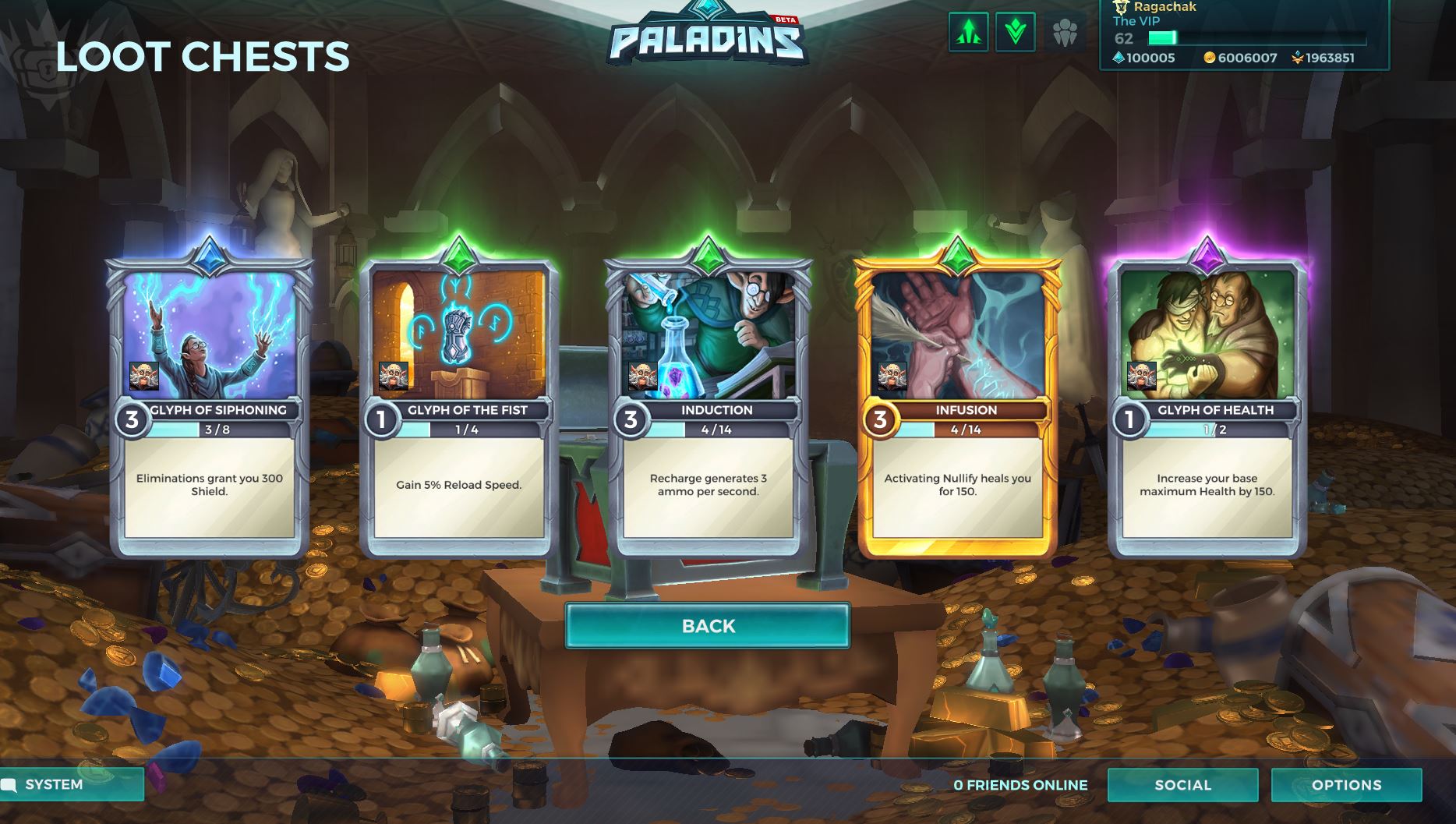 It was rough going, getting cards at first.

One of the big thing that was missing from the system in the early preview was the Champion Chests, which you could unlock simply by playing the game as that champion. They also added in later the ability to buy them for 1 Crystal to see what they look like, but as of this writing, the PTS is presently down so I do not have any idea what the changes are. But as soon as I do, I’ll make sure to let you guys know. But I do know they’re working on it and looking into making it a system that players will enjoy and not feel it’s P2W. Let me be perfectly clear though: I do not feel the system is perfect as it is. But I get the idea of what they’re trying to do. The purpose is to make Quickplay a fun, over-the-top mode where insane, incredible things can happen. It does have “progression” though, which is a pretty foul word these days. For this to drop around the same time as the Battlefront backlash though, pretty dreadful timing. I will say I played a fair amount of the PTS, and no matter how broken the other teams were, with good teamwork, map awareness, and skill, we won. I won far more than I lost, without having tons of level 4/5 cards.

I do think it needs some adjustment, some changes to make it accessible, and not a soulless, frustrating grind, because as I’m about to show you in my email, I unlocked well over 300 chests, and received very little from them. The numbers required for upgrades are dreadful. I feel like Legendaries should not be upgradable though. Those cards are already pretty damn strong.  That much I do agree with. But I’d argue that ranked is now grind free, and far more balanced. People have said “With all cards at 3, builds are going to be the same and bland!” and I just don’t agree. There are a lot of cards that get more powerful and will be more viable than ever before. Sure, you won’t have level 5 cards there. But there are so many cards that simply don’t get used because it’s not worth using them at 1 or 2 points. So I’d argue, and this is just my opinion, that Ranked is better than ever. There is one bit of criticism that I do think is fair though. One of the things about Casual Mode is that it’s to get people ready to play ranked, and if they get crushed by people with nothing but 4/5 cards, they’ll wind up leaving or playing less. A solution? Make Quickplay an “Arcade” style mode, and keep Casuals to learn the game. But this is what I sent to Juju, my thoughts on Cards Unbound. It doesn’t come from the place of a shill or sycophant like some people are bound to say, but my sincere thoughts on the system as a whole. This feedback was before Champion Chests were added, which definitely helped.

Hello! Jason here, Lead Writer from MMOHuts.com. So, I’ve been really giving some thought to this update, and I’ve seen a lot (and I mean a lot of people) kvetching about it. So I’ve been looking at it from more than my perspective. Because in my opinion, it’s mostly fine. I only really play ranked, so the new system there is fantastic. People are complaining that it takes away competitive changes in builds, but that’s far from true. From my perspective, it simply makes more cards viable (Heaven Forbid), and I can’t understand why people are upset.
However, the main cause for concern seems to be Casuals, so I played a fair amount of them and also unlocked anywhere from 300-400 chests. The number escapes me, but it was a mountain of them. I don’t think I have a single level 5 card, and maybe five or six level 4s. I have plenty of 3s, at least. Here’s where I think the disconnect comes in. I love that all the cards are available. I know lots of people who I convinced to start the game, and the major complaint was trying to get cards to play characters effectively. So, it’s definitely a cool idea. And the “Champion Chests” are also a good call to help for specific champs, as well as the Legendary Keys (which I do still think are a bit on the high-cost side, especially now). 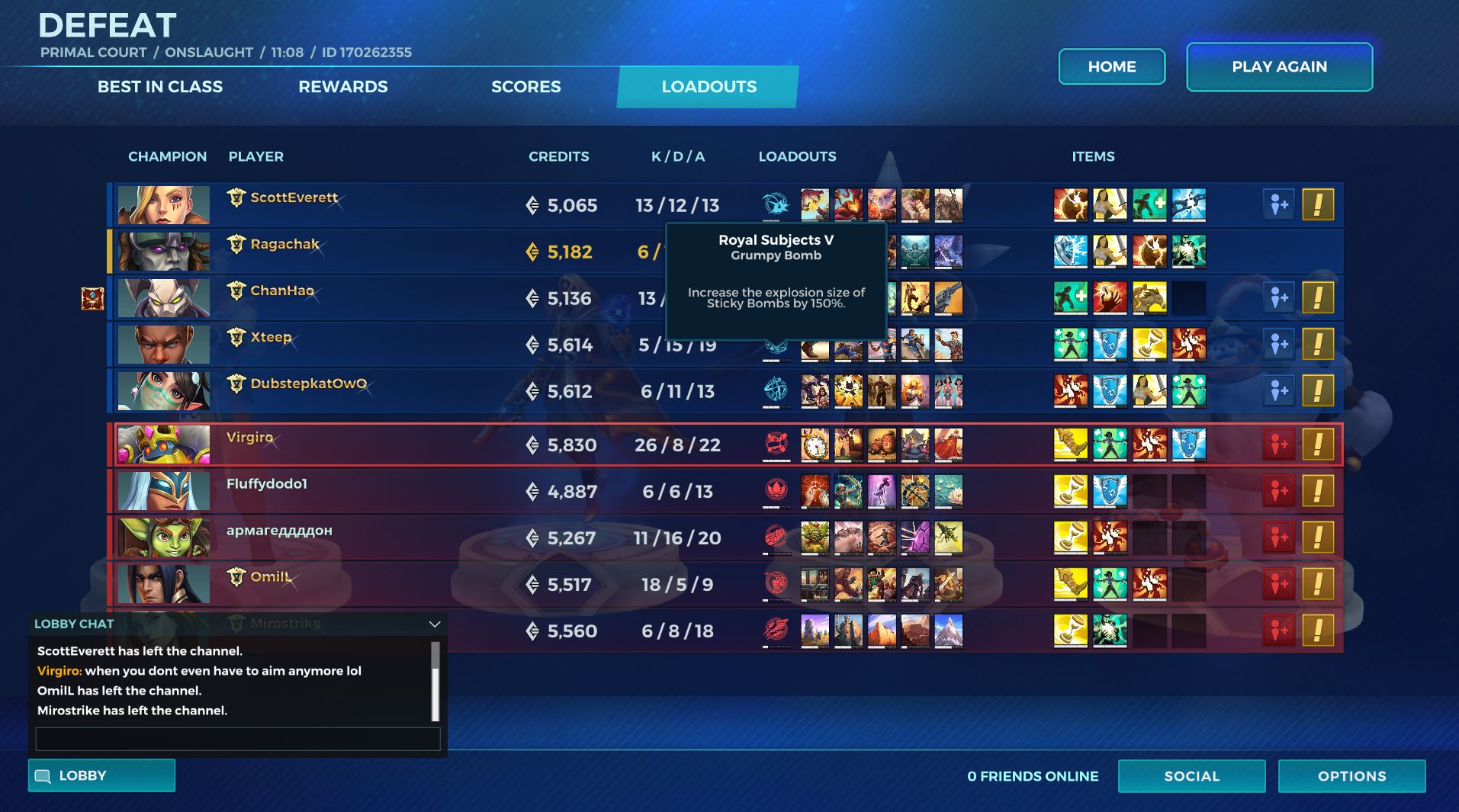 The matches weren't really that bad though, to be honest.

I’ve even seen a petition going around to stop this update, because so many people are upset, fearing the game’s going to be pay to win. Because now, casual mode is going to be dominated by people who spend more money/time to grind out better-ranked cards. Because gems will no doubt be able to be used on chests before too long, and so that’s where the problem seems to lie. I can’t really blame people for being upset because I opened so many chests and got virtually nothing that was useful. My personal opinion would be to either 1. Not make cards need so many copies to level, or 2. (Probably the better choice in my estimation) allow cards to be leveled up with gold (probably not crystals, but having the choice for gold, VIP points, and crystals could be great too). That way, there’s a use for all that gold (I’m about to have 1 million plus gold and NOTHING to do with it).The community is sincerely worried that HiRez is turning Paladins into something pay-to-win for the Quickplay Mode. I personally had no issues winning Quickplay matches, despite enemies having Rank 5 cards (on Lex and Bomb King, which are insanely OP at that level. 150% Sticky Bomb Radius? Yeesh). 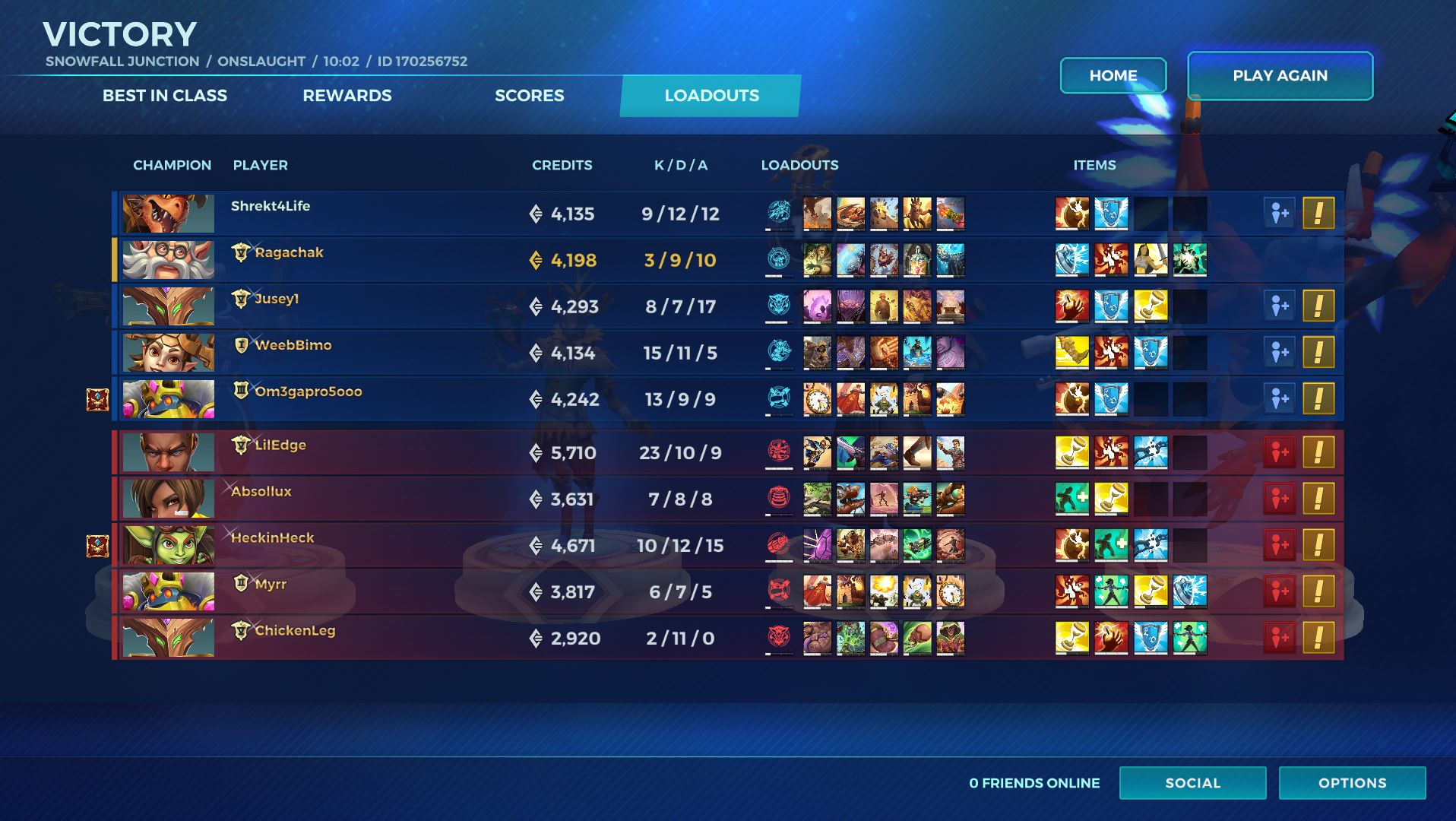 This was gold/silver versus Platinum/Diamond (the other team).

I like this idea quite a lot. It opens up the game to players in a way that hasn’t been offered yet. But the majority of players don’t seem to realize that the reason for a beta is to figure out how to make the game balanced and fun for everyone. They don’t realize that yelling, petitioning, cursing and threatening do not help, and only upset people. But there has to be a better way to improve your cards. I do think perhaps using Gold for just that could allay some of those fears. The other thing I’ve heard a lot of is to use that Nemesis Chest (three choices from a chest, pick one), and I genuinely hope that’s a thing that’s adopted. (That’s just an aside, apologies) But the Ranked in OB 64? I. Love. It. Now a ton of cards go from “Why would I use this? One point of this is worthless.” to “Hey! It’s at level 3! I can pair this with this, and do insane funny things!” which is just dandy. The rest of the update is pretty great in my opinion, though some of the cards come across as perhaps a bit too strong. (Inara doing 21k damage? Is it my time to shine as a tank?) But what I do like about some of those, is it changes team comps and positions for champs. Like, it felt feasible to play Mal’damba and tank, or AOE heal on Seris and really shake the game up in fun ways. It’s just the Quickplay Debacle that has people worried. I’d hate to play a fun random game and see an enemy team loaded out with nothing but rank 5 cards and beat me in four minutes.
At the end of the day, they are a business and the free-to-play model can feel frustrating. But the system as it was last week was really missing something that let players feel like they could simply play without being forced to spend money. Give fair, balanced options for that and I think people will be happy. But let’s be honest, there will always be people that are upset no matter what change happens, and that this game is in Open Beta, and things can and will change. But I do love the idea that new players can just start with all the cards, that’s the biggest thing I liked about it. Is it perfect? Of course not. But it could have been adjusted and noted far quicker instead of yelling “P2W” “Uninstall” and “Dead Game”. Let’s be adults, yeah? If you want it to go away, that’s fine. But offer constructive criticism. Don’t go on Alyssa, Juju, etc, etc, etc’s posts on Twitter and yell at them for something that’s out of their control. I love Paladins, and I want the systems implemented to be fun and enjoyable for everyone, not just me.
#hirezroundup #opinions #feedback #paladins #smite #cardsunbound