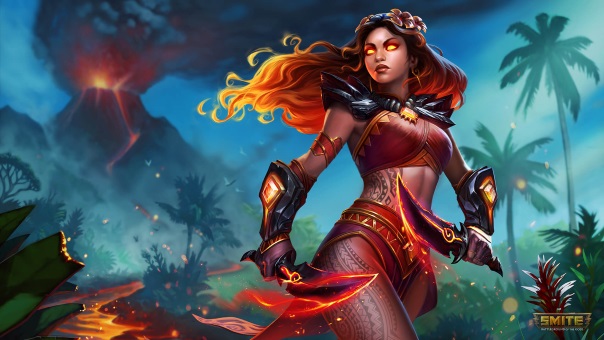 I’m having to watch a lot of last week’s SMITE/Paladins LAN in VOD form because a lot of this stuff airs when I’m doing other important work-related things, so I don’t have time to give them the focus they deserve. But what I have seen was absolutely crazy, and though I was admittedly rooting for Rival and Elevate, I do want to say congratulations to NRG in SMITE and the Onslaught’s Paladins team for claiming important victories as we are inching closer and closer to Worlds in November. It’s so weird to say that Worlds is coming in just a few short months though. I had really gotten accustomed to the January travel and everything that comes with it. This will definitely be a change, seeing Smite/Paladins not being quite so insular, and having the opportunity for fans of other games give it a view/whirl at Dreamhack Atlanta, this November. I’ve been going over matches as I can, and maybe I can do some play-by-play/analysis of them as the weeks go on, but this week, in particular, is very busy for me, so it sadly has to wait. I do want to say before I get started, that I am so glad that Athena is the next Mahou Shoujo in SMITE. All is right with the world. Also, please check out this post for the Realm Royale console closed beta. It’s going to be a hoot, so go check it out and sign up!

Do you know how hard it is to do this while New Japan’s G1 Climax 28 is going on? Very! But as Smite marches ever-closer to worlds, we have another big update, which is also going to feature the first Polynesian Goddess, Pele! Now, I am disappointed that she’s not a guardian, I will be putting together a piece on her just as soon as I possibly can. I’m not known for being an assassin main, or even being great at it, but I love her kit, I love having to consider so many different things, and not just be “1, 2, 3, 4, move on”. Her kit is definitely interesting, and I see she’s rocking the Chidori as an ultimate, so I see someone’s a “Naruto” fan in the offices. Her power is wild, her abilities grow with her, and some of her range is pretty high. Not to mention, she’s an assassin with CC, making her doubly deadly. It’s not a huge CC ability, but a minor knock-up automatically made me consider using her in the solo lane. How frustrating would it be to take that knockup and have Awilix hiding somewhere in the shadows? Bloop! Now you’re dead! I also want to point out that Arena won’t have those annoying 20-second death timers anymore, that’s probably one of the biggest things to me.  It will make Arena feel less frustrating, whether it’s the early or late game if you’re behind.

There are just a ton of bug fixes, from items to gods, so I’ll leave the patch notes below for those interested in that. So with that said, I want to get right into items. I’m sincerely surprised that only one of the Masks received any major changes. Some of the masks had their role made clearer (who can purchase it), but Lono’s Mask did see a minor change. The sacrifice stat for it is “-20% healing done”, which I think should balance the mask nicely. I thought there might be some more changes to the masks since all I’ve heard is people kvetching about them, but that’s the Internet for you. Atalanta’s Bow also saw some changes, but that’s not a new thing. It’s seen a few adjustments over this season. It lost Max Stacks on its passive (4 down to 3) and lost some Movement Speed (7% down to 5%). However, it did receive 10% movement speed overall, so some of its movement speed will be on all of the time. This ought to perhaps make it a viable Hunter pick, where other roles have better options (EG: Katanas). Gladiator’s Shield definitely saw some love, and now heals the wielder for 0.5% of their Maximum Health/Mana on a successful Basic Attack on the enemy. It should also be clear that it can trigger multiple times per ability or basic attack, scaling on the number of targets hit. What this says to me is that Death’s Toll is back, and is even viable a little later in the game.

Is it a surprise to anyone that Freya saw a nerf? Well, it wasn’t a shock to me. Those numbers looked pretty high, and she still very much felt like a Burst Mage, when the idea is to turn her more towards the ADC Mage, like Sol. With that in mind, Northern Lights saw a decrease in Magical Power Scaling (60% down to 50%), making that burst feel a bit less impactful but still viable. She actually had a minor buff though! Aurora Blade‘s Mana Cost went down per shot (25/33/41/49/57 to 20/25/30/35/40). So these aren’t “nerfs” per se’, but Freya mains are bound to see it that way. Definitely more in line with what the goal is, I think. The mana cost going down makes sense too though. You want her to actually be able to fire those shots more than a couple of times. The Morrigan saw a bit of love too. The Bonus Minion Damage to Dark Omen was doubled (20/35/50/65/80 to 40/70/100/130/160), making it so she can actually compete during the laning phase. It’s a really rough spot for her, and while she still can excel at every other point in the game, her actual lane phase was pretty weak. So this ought to help catch her up.

I feel like it’s very difficult to adjust Skadi. Give her too much and she gets insanely out of control. Don’t give her enough/take too much away, and she’s not even picked. She’s not been making too much of a splash lately, so the Smite team is looking at her Piercing Cold, which, instead of receiving more damage, saw a 1-second cooldown reduction (15s to 14s). Kaldr, the Winter Wolf also got a little love, making it so the time taken to regenerate a hit point was lowered (10s down to 7s). This will let her use her doggo pal just a little more often, making Kaldr once again a threat. Last, but definitely not least, Vulcan is getting some new tools in his kit. Backfire can now go through walls, letting him join his magical friends of Ares and Cerberus on the “can do annoying things through walls” team, and Inferno Cannon did not get a flat damage boost but instead deals damage as if the target had 25% less magical protections. This is a really interesting choice. Simply boosting the damage would probably make it too strong, but this will give it its own type of Magic Pen. Very interesting change. Let’s see how it affects things.

Paladins: A Koga Build or Two:

I’m so bad at flanking/assassining/whatever you want to call it. But Koga’s got so much to offer, and I really like the kit of the latest ninja to join the Champions of the Realm. I really like the Dragon Fangs Trait though. “Dragon Stance no longer consumes Energy, but instead consumes 200 Health per Second”. Is it dangerous? Of course it is! That’s why I love it. Instead, I pack the deck with lifesteal, health gain, anything to keep Dragon Stance going just a little longer. It would be far more deadly in competent hands, though. With this build, I’d go Criminal Record 5 (25% lifesteal in Dragon Stance), Wind’s Embrace 3 (Heal Health per second while Agility is active), Swift Hands 1 (Reduce the time to enter/exit Dragon Stance by 10%), Tenacious 5 (Activating Shadow Step heals you for 300), Guild Tactics 1 (kills with Skewer restore 200 health). If I were better, I’d probably offer more points into Skewer instead, to get bigger numbers, but it seems like a little bit of a gamble. But I did want to briefly mention Paladins, because I love the game, and it’s now on the Nintendo Switch! However, I did hear that Nintendo can’t/won’t let them sell the Founder’s Pack on the Nintendo Shop. I don’t know exactly how that works, but I hope it can be worked out.