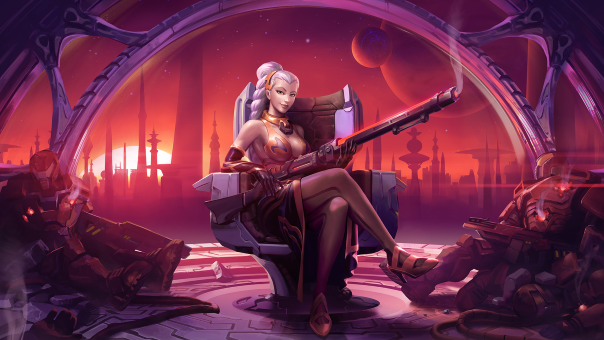 The Spring Split for SMITE and Paladins are both in the books, and both had their own reasons for being incredible. I missed both sets of matches live, because I was busy with other work things, travel, et cetera. Fnatic ran an absolute train over everyone, being the first team to go undefeated through a whole split, dominating everyone, everywhere they went. Fnatic went 10-0 during the whole season, and 2-0 over G2, dominating everyone. Will they continue to go undefeated for Masters? Time will tell! The important thing to take away is, “Will the other teams learn anything from their losses to Fnatic?” and the answer should be “Absolutely, we’re watching the tapes back”. As far as Smite went, I was worried about Team Rival at first, despite having a pretty rough start in the first matches. But the reverse sweep at the end was far more majestic and dramatic. Both RivaL and Dignitas clearly deserved to be the teams at the end. I’m not going to spend a whole lot of time on statistics, but I do have them (thanks to Twitter), which can be found here. For Summer split, I’m hoping to have more time to watch and do my own play-by-play.  The Smite news this week is shorter than Paladins for a change! All I really have to talk about is Divine Uprising because Chernobog is written up and ready to go. If I had watched Masters live, I’d have way more to say.

Okay, so I love Smite‘s skins. I am fine with knowing that there are going to be X amount of skins over the next patch, and getting them all gets you the Bellona T5 skin. I hesitate to use “for free” because you did spend potentially a fair amount of gems. But having this and Odyssey in the same year is very clearly going to get expensive, free gems in quests or no. Now, they did adjust it to be 300 gems a roll, during the lifetime of the patch, and at least there’s also the 50% off a roll for each Pantheon (once per pantheon). I’m also grateful that these will be in smaller chests, and the whole “pick one”, which, might I add, should be on every chest in the game, but where people are really upset about this it seems (other than two Odyssey style events in one year), is that they can’t just direct purchase the skins. I understand the need to profit, but these are going to be small chests, with a very limited amount of items. Why not just make them direct purchase? Smite’s had a precious few non-Limited/Exclusive skin list over the last several patches, and it’s got a lot of people upset, on Twitter, Reddit, the Bottom Tier Discord, you name it. People just want to be able to buy them outright, without risking disappointment in a chest.

I do want to say again, please make every chest a roll 2/roll 3 option! It would surely make people a little less disappointed when they buy a bunch of gems and don’t get anything they want out of it.  Very few things are more disappointing than rolling 15 chests and getting zero things you wanted out of it. I like the skins, I like the concept, and in all fairness, you don’t “have” to get the skin. It is very fancy though and I can see people wanting it. People are going to riot if the Odyssey winds up behind random chest rolls too. I love Smite, I love the Divine Uprising event, but I definitely see why some folks are upset. There are also a lot of people that don’t really care about the non-skin cosmetics and feeling obligated to buy them comes out to a waste of their money. Maybe take those out of the event or even make them optional purchases? This is a new system that Hirez is trying, but having the limited skins direct purchase is a far better option for players, in my opinion. Even the people that don’t care about the T5 skin at the end are more likely to purchase, and purchase just what they want, and won’t feel burned at the end. Maybe some kind of path for players to buy from chests, and focus their rolls on a particular “role”? Assassins, et cetera.

Now that Paladins has launched officially, the update cycle is changing slightly. Now it will be every six weeks, which is fine, because each update will include new Champions, Events, and other huge features, making them all feel like important updates, and less “Here are some cosmetics, guys! Yay!”, which I’m excited about. 1.0b is slated to go live at some point today (no time has been listed yet that I’ve seen, so I assume later this morning, EST). In between the major updates, there will be smaller updates (like this one) that are focused on balance, polish, bug fixes, the important things. Everyone loves balance, right? No? Your champ should be the only one that’s overpowered, and only when you’re playing them? Oh, fair enough. 1.0b also brings Battle Pass challenges! These will help speed up your progress through the Battle Pass, and players who complete them all before the Battle Pass ends will receive a Legendary Title, “Gearhead”. I like it, I need it, I want it. Guess I better get back to grinding some Paladins, eh? Two new skins drop in this update, Mercenary Strix (lookin’ like a Judge, I see you), and Galactic Scion Lian, both in the Galaxy Chest, which is making a return! I wonder if all of these smaller updates will be themed in a similar way, which I could be okay with. Though I would like to see more direct purchase skins for Paladins, too. I don’t mind Chests in Paladins as much if they stay small, but those 60~ item chests in Smite are soul-destroying. A third cosmetic is also admittedly in this update, for people who buy/acquire 1500 Crystals in Paladins Strike, it will unlock Covert Ops Lex, which looks super cool too.

So now, I want to talk about some of these balance changes just a little bit. The biggest, most important change to me personally, went to Ash! The Slug Shot range increase might be a little high (I dunno, I might have put it 75~, I’ll just have to see how it feels in game), but I’m so glad she has a long-range option now. One of the most frustrating things about me playing Ash was to set up a shot and watch Ruckus just stand there because it exploded right in front of him. All around, Ash got buffs, with her Shoulder Bash losing some CD (17 down to 15), and Assert Dominance seeing increased range (350-600) and increased Max Horizontal Velocity, making the dunk all around more impactful.  I did kind of feel you had to be really close to ult, but I worry it might be too far. We’ll just have to see. To be frank, I already thought Ash was an incredible tank, except for Slug Shot, but this will make her feel like more of a menace, and damned if she didn’t need it. This is a very Frontline-based update because we also saw some nerfs to Inara, and if you think she didn’t need it, you’re wrong. Earthen Guard lost some Reduced Increased Healing (60% down to 40%), and Stone Bulwark saw a reduce in Healing (30/30 down to 25/25). Inara was so, so, so insanely hard to put down if your team coordinated around her even a little bit. Before you start buying Cauterize, she’s almost impossible to kill, and few things felt more deflating.

Khan, no matter how much I loved playing him, just didn’t feel as good as the other tanks. I could make plays and could enjoy playing him, but he just felt . . . he was missing something. He received an absolute slew of changes, increasing some of his scaling, damage, damage reduction scaling, to hopefully make him a slightly more viable pick. The big ones were Battle Shout gaining some increased Healing (800 up to 1000) and Commander’s Grab gaining some damage (400 up to 600). All of the changes will be below, of course. Ruckus lost 500 health (down to 4000) and I’m glad for it. Ruckus is my least favorite tank, and the more I see him, the more I see people not play him as a tank. Sure, Paladins lets you play lots of characters outside of their role, but when someone declares they’re going to Frontline, they pick Ruckus, and we never see them on the point, my blood pressure rises to unsafe levels. This is not one of the major patches, but a lot of Frontliners got adjusted here, and I think it could be for the best. Though I do love the meme where Kinessa has Ash’s face, thanks to that range increase.

It’s been an interesting week for Hirez developments. What stands out for you? What do you want to see in this spot? Let me know below!