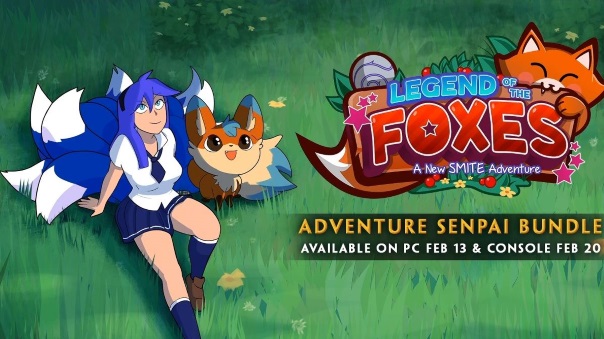 What? ZZ Gundam was good! For future reference, it’s “Not an Anime”. It’s also the opening theme to Mobile Suit ZZ Gundam. It’s also thematic today! We’re going to talk about SMITE Patch notes, because the first Adventure is here, and patch notes have some good stuff in them this week. There’s simply not a lot else going on right now, which is unfortunate. But that’s okay, I’ll work something out, I’m pretty good at that. At any rate, let’s get started!

This is a jam-packed set of patch notes! I missed most of the live show of them, but I’ve sat down with the physical notes, and that should be more than sufficient. But what’s in store for us? Some god buffs (which some make sense and some boggle my mind), a whole smorgasbord of new skins, item adjustments (Suck it, Deathbringer), but most important perhaps, the return of SMITE Adventures! I love these so very much, but this one, in particular, I’ve known about for a long time, and I’ve been eagerly awaiting to see what we’d get in it. The curse of journalism, folks: We never get to talk about fun stuff until much later. At any rate, this is a… less sadistic, less evil version of our favorite fox, in “Legend of the Foxes”! Senpai Da Ji needs our help to defend the last of the foxes! It’s a horde mode, where players deal with an unending assault of minions, Elite monsters, Bosses and Gods to earn the favor of Da Ji. It will be around from Patch 5.2 through Patch 5.4, so there will be plenty of time to settle in with it. Of course, it will be free to play, but the bundle can be acquired with gems and contains: 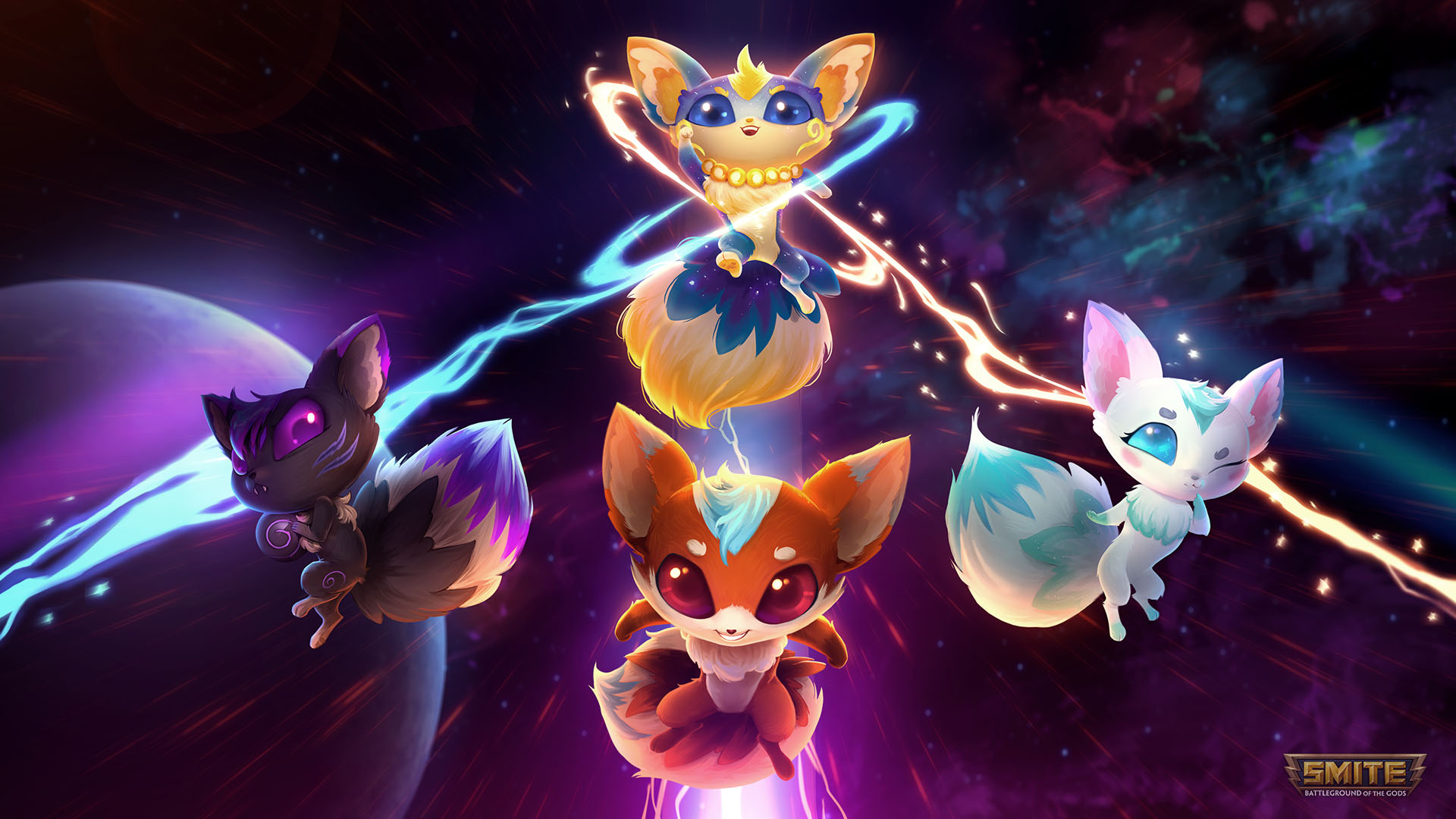 I really like the cell-shaded art style of this area and the skins that accompany the event. It’s a really beautiful visual, and something incredibly different, never-before-seen in SMITE until now. You gain Fox Points (see above) from winning Adventure matches or purchasing them to get a chance at the special Ratatoskr skins. Collecting all three during this time period will unlock the “Final Fusion Ratatoskr” skin, which is glorious, even for that vile little rat. It’s our job to team up to endure and defeat these waves of enemies to protect the Sacred Fox. I think the coolest thing about it is that Cristina Vee (Sailor Mars, Noel Vermillion, and so many more characters), one of my favorite VAs is voicing Da Ji! Will we be playing the mode? Of course! Will we try and secure some cool guests to play it with? You know it! Stay tuned for more awesome SMITE Adventure content from us over at Bottom Tier! Now, speaking of skins, let’s go over some of those! I strongly disagree with Ne Zha getting another skin, because I’m sure someone else could have a hockey skin (though on reflection, I’m not sure whom. Chaac?). Though I love DJ OHM Ganesha more than I can express, there are so many names that could have been used. Why not Elefunk Ganesha? No Daft Punk goofs? I’m a little disappointed. But the skin is awesome at least! There are three skins from the current Ragnarok event (including Hades with his amazing global emote), Hades/Cerberus Mastery skins, the SMITE Adventure skins, and … Ne Zha.

Kitsune Ratatoskr (Exclusive, Adventure): Love the cell-shaded Kirara look (a’la Inuyasha), but I hate Ratatoskr more than I can put into words. Though it is an evolving skin from what I understand, that’s pretty awesome. But … why? Why Ratatoskr?
Senpai Da Ji (Limited, Adventure): Well, Colton’s about to become a Da Ji main. Very traditional anime school girl. Sailor Fuku and all! I love the blue tails (though green is much cooler, imo), and the animations/effects on it are just tremendous. This one’s worth buying the bundle for, without a doubt.
Marvelous Maid Amaterasu (Limited): I’ve heard a few complaints about this one, but I don’t really understand. It’s a different look for Amaterasu, sure. It’s less “pure” than her other skins. By that I mean it has mountains of cleavage, a maid uniform, and twin tails. I do think her weapon should have been some kind of Swiffer or a broom with a dustpan on the end. Missed opportunities, that.
Ragnarok Hades (Limited, Ragnarok Event): Hades surrounded by lava! The voice pack is awesome, the very Fire Elemental look is sharp. I was admittedly waiting to hear, “BY FIRE BE PURGED”, but that’s because I played a lot of World of Warcraft. He also has a global emote, that matches his ultimate. When he ults, the giant fire swirl in the sky hits (like the one from Anubis’ Tier V), but he can activate that effect as he pleases. Time to troll people and trick them!
Oblivion Hound Cerberus (Exclusive, Ragnarok Event): Oh. My. Lord. His first skin is delightful. a boney/muscley Cerberus, plated in metal. The effects are very cool, and it’s all worth having. But it’s not as cool as …
Oblivion Queen Discordia (Exclusive, Ragnarok Event): A more evil, sinister version of Discordia. Instead of the Golden Apple, she bears a skull! And when she ults, it’s two skulls fused together! Not altogether wild about some of her voice lines, but I get them, so that’s all that matters. But I love the skirt/top, with their stars and comets and stuff on them. Very thematic. And the bony wings are a nice touch.
DJ OHM Ganesha (Limited): I don’t even have to say anything about this. But I will. It’s Ganesha in a Daft Punk-themed helmet, a mic, and turntables. 10/10 must have.
Playmaker Ne Zha (Exclusive): A very Canadian skin, probably joining that chest? A hockey Ne Zha in orange and blue (Is he an Edmonton Oilers player?).
Mastery Skins (Mastery): Cerberus and Hades got theirs. How appropriate! 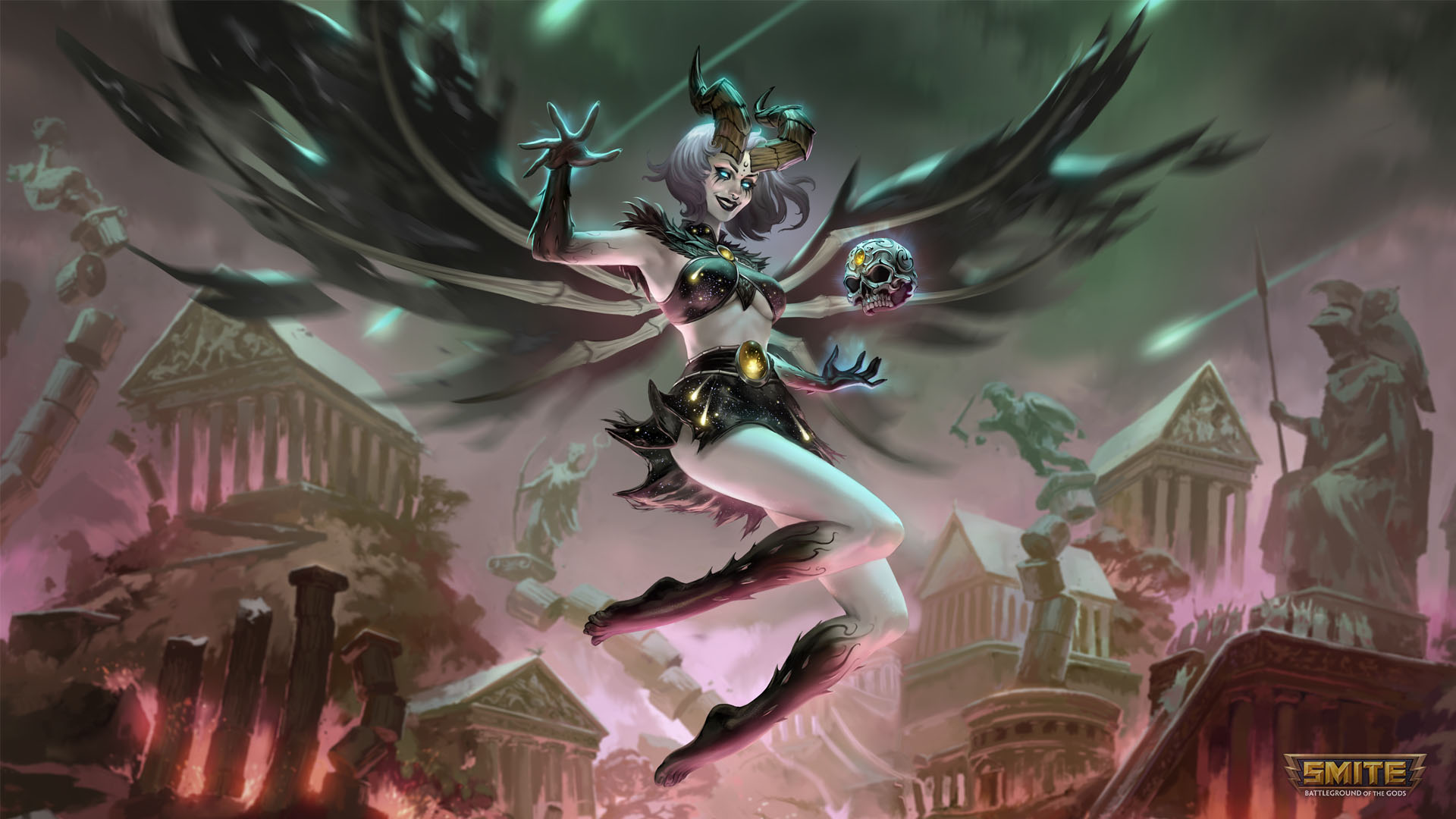 Whew, that’s a lot of skins. But it’s time to talk actual content now! It sounded like there was going to be tons of god balance, and there are some that I think should be addressed that perhaps were not in this. But while I don’t have hard data or numbers, or professional experience, it’s mostly from picks/bans in my particular ELO and what I’ve seen in streams/matches. I stand by Serqet, Ullr, Cabrakan, and Artemis should at least be looked at. I’m not so sure if nerfing Deathbringer was really enough. I love that there was an Ares buff, though (as an Ares main), and I certainly appreciate the buff to Bolster Defenses (Decreased Mana from 60/65/70/75/80 to 40/45/50/55/60), making it a lot more viable to use whenever you need it, but Shackles? I don’t know, I don’t find myself using Shackles to clear minion waves all that often. If there are gods on the other end, then absolutely. Though that’s not 100% true. I do use it on Void Camp, and Harpy Camps when I get around to them. So, all told, I think that was a good idea, even if I’m slightly biased. I’m really confused by the Thor buff though. I mean, I understand in concept. The jungle camps spawn way faster now, and so he’s not going to have his “wave clear” as often, in Berserker Barrage. They decreased the cooldown from 13s to 11s, and while I don’t think it’s going to be some insane buff that lets him use it 2 or 3 times in a teamfight, Thor just seems like he’s in a very strong position right now.

Oh, Vulcan. When Rod of Tahuti saw its rework, Vulcan kind of fell off. One thing I have noticed is that he can’t use a lot of the really fun new passives with his Gun Pet, and while personally speaking, I’m fine with that, I do see a lot of Vulcans played that kind of fall off, due to a lack of awesome effects. He’s still supposed to be a late-game monster that absolutely nukes anyone that happens to offend him. So, they adjusted his Magma Bomb to gain 10% more Magical Power Scaling (80% up from 70%).  I think this was a smart change, instead of giving his Pet the ability to use some of those passives, and I think that might be, mechanically speaking, if you’ll pardon the expression, pretty challenging to do. Would lifesteal given to him heal him (the Pet), or heal Vulcan? What if he’s not in range? There are too many questions there. But Neith! The only Hunter I’m remotely competent with! Dear, beautiful, Magical Girl Neith. Her damage was lacking, though her ability damage is still quite solid. So, she received a bit of a damage boost in regards to Base Power. It went up from 35 to 38, and her Increase per level went up from 2.3 to 2.5. Those numbers seem small, but even a few numbers here and there really add up in MOBAs. I wouldn’t overlook her. 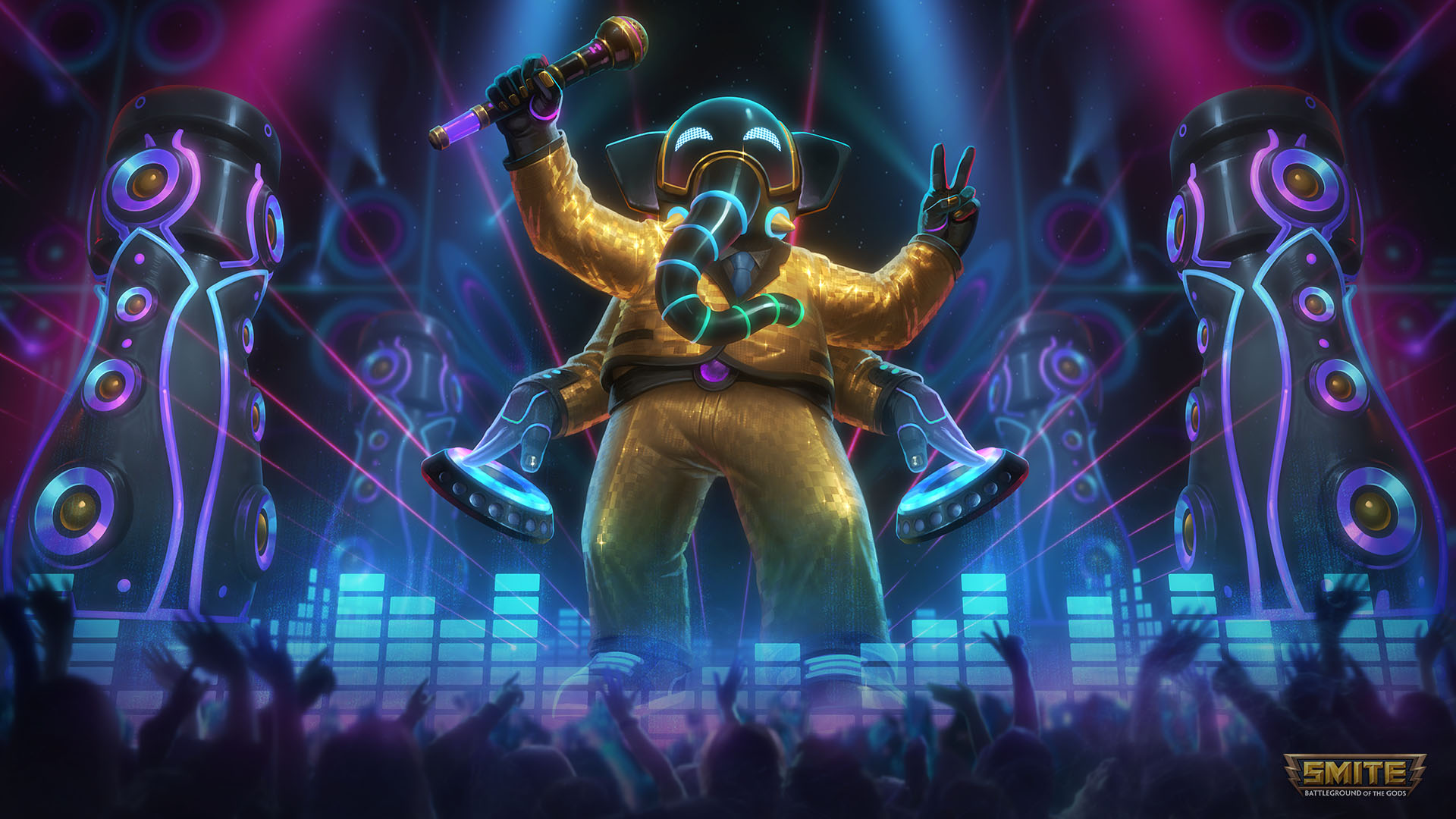 That sweet sweet Deathbringer nerf though! Down 10 points (50 to 40), I’m fine with this. Their focus this buff, according to the Patch Notes is to “. . .make Crit more consistent but deal less overall damage. We feel like the changes were a success, but the build path was clearly overshadowing other options so we want to adjust a few things slightly and make sure Hunters can enjoy just as much build diversity as the other classes of SMITE”. Now, what do you think people will do? Try different items, or complain about a lack of Deathbringer? The answer isn’t as surprising as you might think. Asi also saw a minor nerf to its Physical Penetration (15 down to 10, and Devourer’s Gauntlet is a bit more expensive (2100 up to 2300). I don’t know if this was the right move, as opposed to balancing specific gods, but this might be a more solid temporary solution. We’ll have to keep an eye on “trouble god” performance and go from there. From the perspective of a guardian main, it’s not so bad. Speaking of hunter items, one actually got a buff! Atalanta’s Bow with its cool movement speed passive made it a cool idea to build, but the damage on it did not warrant picking it up in many situations. With a decrease in cost (2300 down to 2200), and an increase in Attack Speed (25% to 30%), I think more people will pick it up.  But it’s time to briefly talk tanks, speaking of which. Midgardian Mail is seeing a Protection Buff, from 30 to 40. It was an item I was picking up last, if at all, and while it has a cool passive, there are items with Physical Protections/Passives that were honestly, just more ideal. Then there’s the new Talisman of Energy. It was okay, but not great. In fact, I can’t recall if I’ve ever even used it. But they changed the decrease in stacks on it (10 to 5), Increase MS per stack (1 to 2), increased AS per stack (1 to 2) and increased the MP5 per stack (5 to 10). This will be something I experiment with going forward in 5.2, to see how it stacks up… as it were.  That was a lot of really great stuff for SMITE! I have a feeling that 5.3 is going to have a lot more god balances than this one though. The season has just started after all, and data does not gather itself overnight.

So, not a lot of Paladins news right now! So in lieu of news and discussion, I will offer you a stream to watch! This was me and Colton (Colton hosted) over at Bottom Tier, while we played some Team Deathmatch in Paladins! We had some pretty incredible matches, but some of the language is not Safe For Work, so fair warning! Chill music, sick plays, and a lot of dunking on deserving dorks.