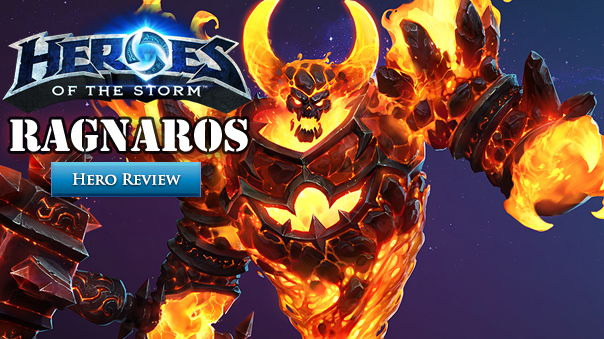 When you think about Blizzard, and their over two decades of making quality video games, what franchise would you say is their biggest? The title that makes you stand up and shout “YEAH, BLIZZARD! I LOVE YOU GUYS!”? Why, Rock and Roll Racing, of course! I’m kidding, I’m kidding. Of course it’s the Warcraft universe. That’s the big money-maker, and today we take another trip to the World of Warcraft. Hey, I thought it was funny. Perhaps it was… Too Soon? Where my Vanilla WoW players at? At any rate, Heroes of the Storm unveiled their newest character, the Old God, the Fire Lord, Ragnaros! He once held sway over the entire world, commanding legions of fire elementals, him and his Majordomo spread fire and destruction across the continents. So what’s he doing now? After the failure in Molten Core, and again in the Firelands, he takes his anger out on the other characters in Heroes of the Storm! BEHOLD. RAGARNOS!

However, I’m a little confused. When I think “Assassin,” I think stealth, sneakiness, and sudden bursts of destruction that leave people dead. Now, he definitely has that last part, because he brings the fire. When I think Ragnaros though, I think perhaps Specialist, Tank, or even Warrior. I disagree on him being an Assassin, but there’s nothing I can do about that! He’s pretty easy to use, has no maps that he really fails hard on, and synergizes very well with a few characters. I cannot think of too many characters that counter him hands down, but Chen and Lunara definitely give him issues. I did notice some little things that really made me happy, like his ability to negate certain effects maps have, like the Nukes on Warhead Junction. I activated my trait at the right time, as the Nuke was falling and I took the hit instead of the base. So, you wasted your nuke, I lived, and then swatted you away with angry, Raid Boss powers. Yes, Ragnaros can become a Raid Boss and make it feel just like you’re in World of Warcraft!

But what does Ragnaros bring to the battlefield? And since Heroes of the Storm, as you guys know, doesn’t have item builds, you have to consider where he belongs on the team. He needs to be surrounded by his minions [RE: The Team] to protect him while he makes life miserable for the rest of the enemies. While he does tremendous amounts of damage that can be avoided, he can be built in a few different ways around whichever ability you think is most important. He’s very easy to build though – just figure out which ability is the most important for the situation and build around it. Personally, building around Empower Sulfuras is the most rewarding for me. It has the highest potential damage output, and while it is risky to be right in their face for most of it, no guts, no glory! But let’s discuss all the potential options. What are these abilities?

I will say that they faithfully recreated the God Ragnaros for HOTS, something I definitely did not expect. I didn’t expect to see him, that is. He needs his insects to body block for him, to set up kills for him, but if he lands one of those rare stuns, he can get work done all on his own. He can become a God among men, but he takes damage like a wet piece of paper in it, so I wouldn’t just throw it around. Knowing when to go in and when to stand back and hurl Meteors will be the key to success. He stands out in the fact that he can clear entire lanes, and become a godly fire being, but he doesn’t really have the all-in capacity that a lot of assassins have… it is something that is very important to be aware of. He’s not a traditional assassin, but there’s nothing traditional about a God being made into a MOBA hero to begin with, is there?