News >
Editorial Articles >
Heroes of the Storm Lucio in Review

Heroes of the Storm Lucio in Review 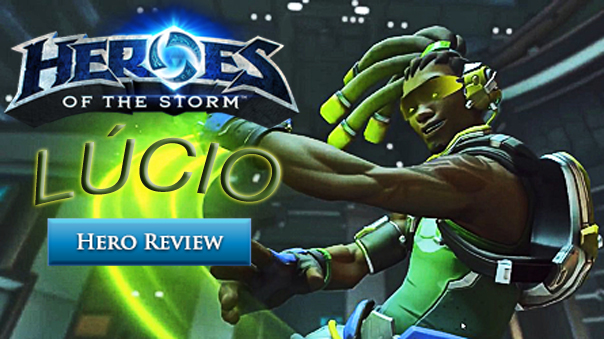 Before this year’s university classes started, I decided to pick up Overwatch and work my way through the ranks. This went well for a few weeks until school started to pick up. Now, 6 months later, I’m at the same spot as before school started due to not being able to play any online game recreationally since the beginning of school. Fortunately, working on various game articles allows me to spend some of my very limited free time playing games. While it is true that we, as game journalists, don’t always get to play games that are enjoyable, I always find myself looking forward to the time of the month when Blizzard decides to release a new HoTS hero. This month, Blizzard helps me get back some of what I have missed from Overwatch by playing Heroes of the Storm. Read on to learn more about the latest addition to the HoTS roster: Lucio, the Freedom Fighting DJ.

Lucio Correia dos Santos is an international celebrity who inspires social change through his music and actions. Growing up in a poor and crowded favela in Rio de Janeiro that was hit hard by the financial upheaval following the Omnic Crisis, Lucio wanted to lift the spirits of those around him. He found his answer in music and its power to bring people together. When the multinational Vishkar Corporation broke their promise of improving the lives of those in his community, he stole their sonic technology to use against them. With his newfound fame, Lucio realizes that he can change the world.

Lucio is a ranged support hero from the Overwatch universe. He uses his beats to support his team with heals and movement speed buffs. His playstyle is somewhat passive as he slowly improves the lives of his teammates from the sidelines, but this passivity quickly adds up over time. What may seem like small heals or movement speed buffs can easily turn the tide of battle. Well timed amps and sound barriers can quickly change the flow of the game.

Can’t run away from Lucio!

His gameplay revolves around his two tracks providing allied Heroes with either a Speed Boost or Healing Boost. Using Crossfade (W), a low cooldown ability with no cost, Lucio can quickly switch between these two tracks.  Healing Boost slowly ticks to heal allies within range and Speed Boost, like the name suggests, provides a speed boost to nearby allies. These bonuses may seem small but with Amp It Up (E), the raised volume of Lucio’s tracks provide increased heals and speed boosts. Simply stay near your teammates, select your choice of track, and amp it up to provide some great support.

Keep yourself alive with heal and speed boost

If this sounds too passive for you, you can blast Soundwaves (Q) to deal damage and knock back enemies. This ability should not be relied on for the damage but as a form of disruption. It is great to save allies, secure kills, and even position enemies for your allies. Using Speed Boost alongside Amp It Up, Lucio can open doors to the best possible engagements into team fights. To help your team and push enemy Heroes out of their comfort zones, you can run behind them with your increased movement speed and push them into your team or a corner. At first I wrote this ability off, but after playing a few games with competent teammates that can capitalize on out of position enemies, I found myself loving to Speed Boost in and push enemies around.

Like most heroes, Lucio can pick between two Heroic abilities: Sound Barrier and Reverse Amp. Reverse Amp causes your Crossfade tracks to have negative effects on nearby enemy heroes. That is, it damages or slows them. This is a very situational ability and most of the time I would suggest sticking with Sound Barrier. After 1 second, Lucio and nearby allied Heroes gain a massive shield that rapidly decays over time. This, like all other abilities, is just like Lucio’s ability from Overwatch. Well timed Sound Barriers can make or break team fights.

Probably didn’t need the shield with that amazing Mosh

When I first started playing Lucio, I was quite disappointed with painstakingly slow (at the time) gameplay compared to Valeera. However, as I continued to play and learn the hero, I’ve discovered how fun he can be. It may seem like you are just running around in hopes of staying close to allies to provide support, but Lucio’s skillset allows you to have some serious fun. While Lucio cannot ride a mount, he can ride walls – providing him with an increase in speed. Couple this with Speed Boost, Amp it Up, and Soundwave, and you have a lot available to annoy the enemy team. Sure, you may not be able to destroy enemy Heroes, but you can really annoy them and help your team to take them out. I’ve always been a fan of annoying mechanics that can slowly tick away at enemies – Lucio does this very nicely.

In a typical game, you will want to always be on the move trying to keep your team alive either by healing them or helping them get away. When on the offensive, your Speed Boost can easily create opportunities to engage on the enemy team. Crossfade does not cost you anything, don’t be afraid to switch between your tracks frequently to make the best of both buffs depending on the situation. Talent choices are clear and can basically be copied from game to game – improve your tracks so that you can provide the best possible support for your team.

You can wallride anything that is impassable

Lucio has the potential to be a great support hero. His abilities are not high impact and rely on allied Heroes to make the most of the opportunities he creates. This means that your success, more than other support heroes, depends on your team working well together. I have a feeling he will see a lot of time in competitive play where teams work great together, but he can also do well in public games. I look forward to seeing how the game evolves around Lucio but even more so, what other heroes we see visit Heroes of the Storm from the Overwatch universe.