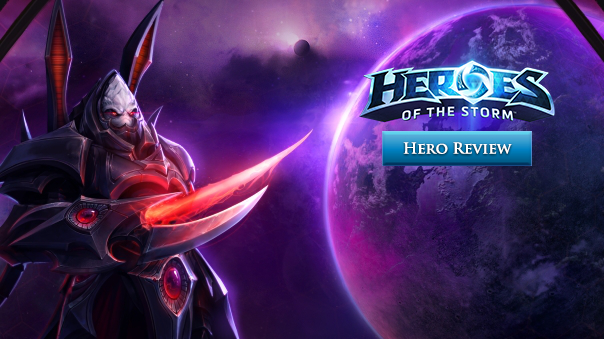 Blizzard’s Heroes of the Storm brings in elements from all the games we love: Warcraft, StarCraft, and Diablo. There are multiple heroes available for players from each game such as Kerrigan from Starcraft, Li Li from Warcraft, and Li-Ming from Diablo. However, not all games have equal representation when it comes to the game’s battlegrounds (maps). The latest patch introduces us to a new Protoss hero, Alarak, and a new battleground set in the Starcraft universe! Read on to learn more about Blizzard’s latest big update.

Lately Blizzard has been on fire with the great new World of Warcraft expansion and welcome changes seen in Overwatch’s competitive game mode. They are not looking to stop this streak just yet as their latest patch to Heroes of the Storm is a big one. It is not unusual to see small patches with simple (but appreciated) bug fixes but a patch containing both a hero and a battleground is something special.

Alarak, Highlord of the Tal’darim, is a melee assassin hero from the StarCraft universe. “Not all heroes are born of altruism… some, like Alarak, simply desire vengeance. As the new Highlord of the Tal’darim, Alarak leads his people to a destiny free of the corrupt influence of the fallen xel’naga, Amon.” His skillset revolves around manipulating the enemy’s position and punishing enemies who are out of position.

His first ability, Discord Strike (Q) damages and silences all enemies in an area. This is a close ranged ability which is a bit hard to hit due to its delay but if you are able to land it, you will deal a ton of damage. In order to make it easier to hit heroes, Telekinesis (W) can be used to push yourself and enemies at the targeted point towards the targeted direction. This ability is great when it comes to both initiating and repositioning (fleeing…). Alarak’s third ability, Lightning Surge, damages the target enemy and all enemies in between while additionally healing Alarak for a percentage of the damage dealt to heroes.

Like most heroes, Alarak features two heroic abilities. However, unlike other heroes, Alarak may pick up both options by level 20! You have the choice between Deadly Charge and Counter-Strike. Deadly Charge charges towards the selected direction, dealing damage to all enemies in the path. The longer you charge this ability, the further you will charge. Deadly Charge is a great ability if you’re doing well early on and want to secure more kills. However, if you’re playing a more defensive game or against heroes with predictable attacks, Counter-Strike is the way to go. Alarak charges for 1s, becoming invulnerable and sending back a shockwave dealing massive damage if he is attacked during this time. Counter-Strike works great against heroes such as Li-Ming where her projectile attacks become easy targets for Counter-Strike.

All of these abilities, and his normal attacks, deal double damage to enemy heroes with Sadism (passive). All in all, these abilities make Alarak a great assassin able to take down enemy heroes but he lacks any wave/camp clear. These abilities can also be improved through various talents which all have their tradeoffs. Alarak’s talent tree offers talents which improve certain areas of his arsenal while hurting others. Depending on the game, and your play style, different talents increasing and decreasing the strength of various abilities are preferred.

Alarak has the potential to be a very strong melee assassin but he takes a lot of practice and skill to play. Like most melee assassins, if you are caught out of position, you are dead. It is essential that Telekinesis is used both offensively and defensively. However, his mobility is not as strong as other heroes such as Illidan or Lunara. If you are careful about your positioning and keep an eye out for enemies out of position (which you can cause by using Telekinesis), Alarak can be a very strong melee assassin.

Continuing on with the theme of additions from the StarCraft universe, the latest battleground, Braxis Holdout, is the first StarCraft themed map. This is a 2 lane map with a Zerg and Terran theme and is always action-packed. The Dominion’s experiments allow the Terran to unleash swarms of Zerg as weapons. In order to do so, both teams work towards capturing and holding two beacons. While both beacons are in your control, your team’s holding cells are filled with Zerg units. Once either cell is full, both are released down a single lane, mowing down everything (including heroes) in their path.

Holding on to both beacons can be quite tricky, a well balanced approach at both attacking and defending is required. If the entire team moves as one to capture one beacon, the second is left open for the taking. This causes multiple split up fights and since the beacons remain until either cell is full, the game is always full of action. Initially I thought it was very hard to hold both beacons until your holding cells are full. However, once you do take control of both beacons, the holding cells fill up quite quickly. Of course, the fuller cell will be strong: just like all other battlegrounds, teams fight to make the most of the map’s objective rewards.

Li-Ming is an easy Counter-Strike target

In StarCraft II, my favourite race to play is the Zerg. Their small and fast units are great and while they are weak alone, the swarm is very powerful. The same applies in Braxis Holdout. If you fill up your holding cell to a high percentage, it will unleash a large swarm of Zerg units at your enemies. Unfortunately, these units are not completely like those in StarCraft. I mean, flying units take damage from melee heroes! Oh well, I guess flying units being invincible against melee heroes wouldn’t be very balanced in Heroes of the Storm.

Heroes who are able to setup base at the objectives can be very strong on this map. Heroes such as Zagara or Gazlowe may be strong additions to your roster. As always, whether a hero is strong or not depends on the other heroes in the game. Once your team is able to fill up (or fail to) your holding cell, you have the choice of either pushing with your Zerg swarm or defending against the enemy’s. Like with most things in MOBA/ARTS games, what you should do depends on how the game is going. If your swarm is much larger, a single hero may be enough to clear out the enemy swarm while the rest of the team pushes in with your swarm. On the other hand, if you are in danger of losing your entire base, forget about pushing and fend off the enemy swarm. These situational strategies and decisions are what make HoTS so much fun; no two games are ever the same! The addition of new battleground adds to this idea even more.

The latest patch introduced a lot of welcome changes and additions to the game. It is great to see another hero being added to the game but we are already used to the monthly hero addition. It’s not like DOTA 2 where a hero addition is seen as a massive update as it only happens once a year… That is not to say that Alarak is not a welcome addition to the game. The more hero choice there is available for players, the more complex and interesting the game becomes.

The addition of Braxis Holdout adds a lot of value to the game. A battleground is something that can bring a lot of replay value to the game. For example, take a look at games like DOTA 2 or even real life soccer: a single layout leads to (almost) limitless replay value. With the already large pool of battlegrounds in the game, there is not much you can’t do in HoTS.

I’m looking forward to seeing the strategies players develop for both Alarak and Braxis Holdout. A game like HoTS gives the reins to the players; it is up to them to decide what works and what does not. As Braxis Holdout and Alarak are slowly introduced into competitive play, the meta is bound to change.

Great job Blizzard! I’m looking forward to another StarCraft II map, maybe one where my favourite race is not being experimented on by Terrans?

There’s only a few hours to enter our Heroes of the Storm Machines of War Bundle Raffle! Make sure to post your entry for your chance to win one of these $90 bundles that include Alarak, skins, mounts & more.