News >
Review Articles >
Heroes of Might and Magic Online Review 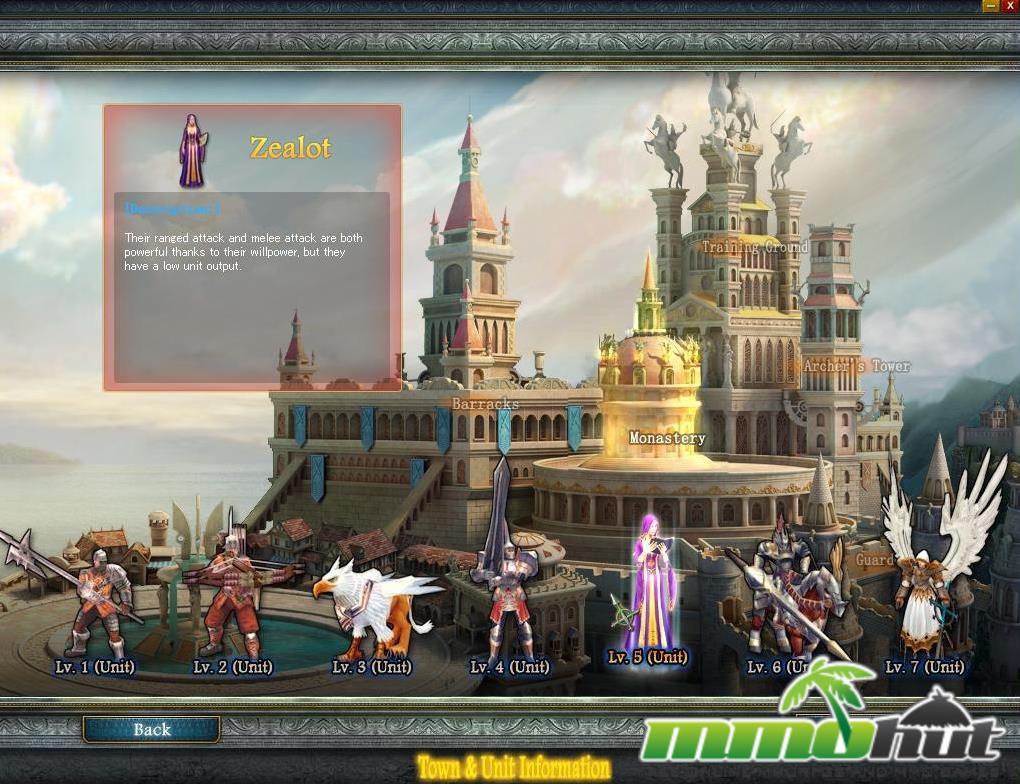 Originally developed for the Chinese market back in 2008, the open beta for Heroes of Might and Magic finally made its way to North America on June 11, 2010. While Ubisoft holds the license for the venerable RPG franchise, the game was developed by the Chinese studio TQ Digital. Best known for their suspiciously similar free to play MMORPGs Eudemons Online, Zero Online, and Conquer Online, TQ Digital did an excellent job with HoM&MO. The game may look simple, but the turn-based battles, pvp system, and city management aspects help it stand out as a truly unique game.

Heroes of Might and Magic Online was originally a browser-based MMORPG, but the Western version has been converted into a standalone client game. This means the game offers visuals in line with other TQ Digital games, but requires a modest 1.3 GB file download. After account registration and installation, players can sign in and chose from several servers. It’s important to note that players are only given a single character slot per server. This is important, as there are no less than eight playable factions, with a ninth (Empire) still on the way. The names given to these factions in the game and on the official site differ, which serves as a prelude to the unfinished translation efforts throughout HoM&MO. Each of the eight factions has a different visual theme, its own strengths, and its own seven-unit lineup. The first few tiers of units are similar across all the factions and include basic melee and ranged fighters. Further up the chain are more specialized units such as the luck reducing Demon of the Inferno faction, or the HP halving Ghost Dragon of the Necropolis faction. A general description of each faction is also provided, so players should pick the one that most closely matches their own playstyle.

Character creation doesn’t end with choosing a faction. Players must next create a hero which commands units during battles. Each faction has a melee and spell caster hero class to choose from, but all have access to the same avatar pictures. There’s no immediate appearance customization options, but players can chose their hairstyle and equip various armors once in-game. HoM&MO uses much of the same lore found in Heroes of Might and Magic 3, but fans of the franchise should approach Heroes of Might and Magic Online as a standalone game, or they or they may be disappointed; the game was designed by a totally different team, and aimed at a totally different audience. 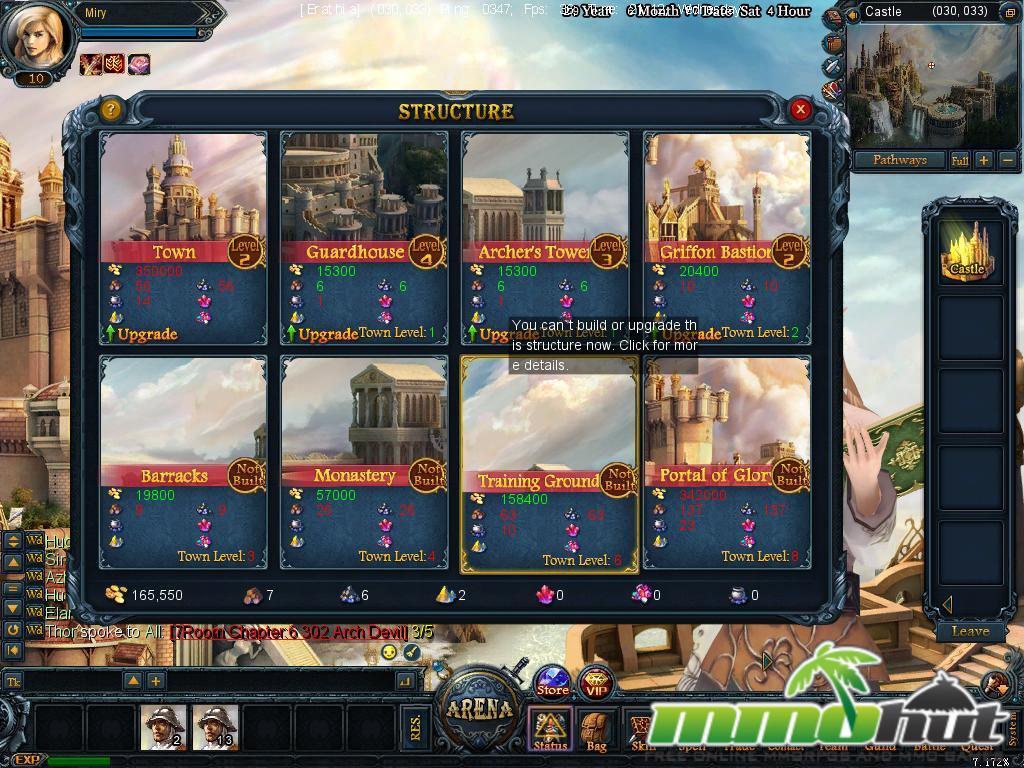 Before getting started, new players are shown two short videos, the latter of which shows an airship ferrying them to the beginner area of Harmondale. Like in many Asian MMORPGs, auto-navigation plays a big role in Heroes of Might and Magic Online. This helps make questing simple, and is especially helpful during the early stages. Players are taken from one NPC to another. Each one explains a different part of the game and provides a massive experience reward. Players will blast through the first ten or so levels simply by walking around town, gaining additional stat and skill points along the way.

It’s Not Easy Being King

One of the first features players are introduced to is their Castle. City management doesn’t play as large a role in Heroes of Might and Magic Online as it does in games like Heroes of Gaia, but players will still need to construct and upgrade various buildings in order to train new units. Each unit has its own corresponding building. Unlike typical empire building browser games, buildings here passively generate units with the generation rate determined by the building level. Upgrading a building has several requirements, including gold, the primary in-game currency, and varying amounts of six other resources which are found while adventuring.

Players start with a healthy army, but should fill their ranks with new recruits as soon as possible. As the tutorial continues, players are given a mount which greatly increases movement speed, and are introduced to the game’s combat system. Battles take place on small, hexagonal maps in turn-based fashion. Each visible character on the screen actually represents multiple units, with the total displayed right under their avatar. Some units can fire across the map, while others must move up to their opponents and strike from melee range. Heroes stand to the side of the battlefield, but can play an active role. Heroes have access to a spellbook that contains a variety of abilities ranging from nukes, to buffs that can be cast on the units taking part in the fight. The early battles are very simple and serve purely as an introduction to the combat system.


Going on an Adventure

Like most MMORPGs, HoMMO offers some simple quests that involve collecting certain items or battling certain foes. Players can wander around the game world completing these quests in which they will contend with random encounters. These world quests are only a small part of Heroes of Might and Magic Online – the Battlefield lobby plays a much larger role. The game has ten ‘chapters’, each of which involve over a dozen scenarios. These scenarios can be played out solo or with a group, co-op style. Scenarios can be replayed, and are available in multiple difficulties. Turn-based games like this are generally hard to pull off with random players, as they involve a lot of waiting. Because of this, most players simply run through the PvE content solo. 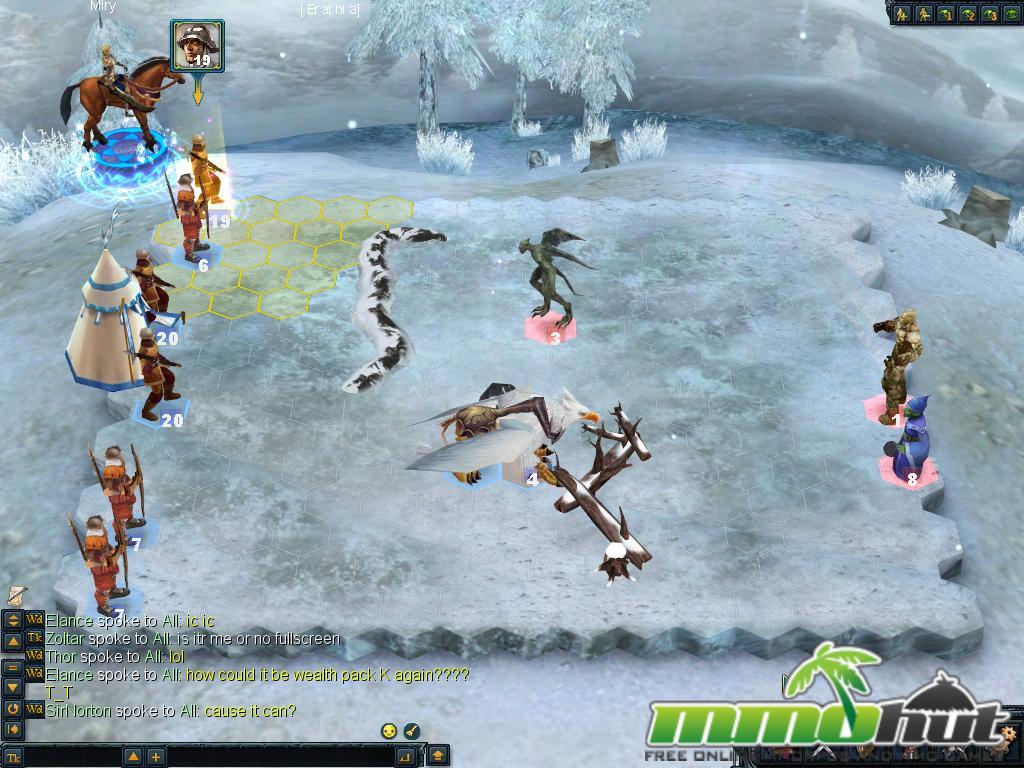 Those who like jumping into new MMORPGs with a small group of friends, however, will find that this system helps keep everyone progressing together evenly. Progress through a scenario carries out in turns with the entire scenario map being a giant grid. Players can only move a certain distance each turn and must interact with NPCs to receive objectives. Plenty of optional content, such as the exploration of ruins, or running across roving monsters, help add some flavor to scenarios, but players should take care not to get wiped off or they will face heavy penalties. Leaving a scenario in order to replenish troops means forfeiting half of collected loot. Luckily, plenty of reserves can be brought into the field.

A World to Explore

The experience rate in Heroes of Might and Magic is fairly high, but a level cap of 100 means it will take a long time to max out. There’s a lot to do on the way, and the chapter structure of the PvE content means player will always have a clear objective. The game’s graphics are billed as ‘2.5D’, but are much closer to those of 2D turn-based MMORPGs like Myth War 2 Online than they are to Atlantica Online. The graphic options themselves are also restrictive. The maximum resolution is 1024×768, but the ability to play windowed means players can do other activities on the computer while playing. The turn-based gameplay style means HoM&MO doesn’t require constant attention and can be played at a leisurely pace. Movement is done purely with the mouse, but that makes sense in a game like this.

The Long and Short of It

Major translation work still remains to be done, entire interface menus are rendered unreadable, and random symbols appear next to some messages. Other bugs involve random disconnects and dismountings, but these are all problems that should be ironed out. A more permanent concern may be the cash shop, which contains items for sale that require the game’s premium currency, Erathium. Double experience and mana potions are common in free-to-play games, but the ability to add sockets to equipment mean paying players will end up with superior weapons and armor. A ‘meditation’ feature that can be purchased actually allows players to gain experience while logged off. Fortunately, Heroes of Might and Magic Online offers so much solo and/or cooperative content that it can be enjoyed thoroughly without worrying about the item mall. Other players may progress faster or have a slight advantage in PvP, but if you’re looking for a turn-based game, don’t let that stop you. Heroes of Might and Magic is very different than TQ Digital’s other titles, and has plenty to offer. Players with no prior interest in this style of gameplay, however, won’t be won over.