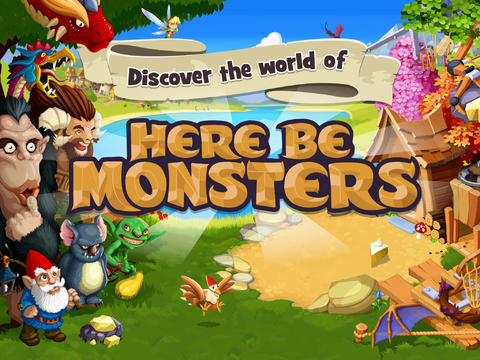 Here Be Monsters, the MMO for iPad from Gamesys, launched worldwide today after a successful beta period in the UK and Canada.

Here Be Monsters combines the real with the mythical – players travel the globe trapping over 100 mythical monsters drawn from the legends of different cultures. They start their adventure in London where they join the Ministry of Monsters as a new recruit and are quickly caught up in the plots of an evil dragon and the lives of the local inhabitants.

As they travel the world, players discover hundreds of local resources from different countries which they can use to build ingenious traps and baits. Thousands of in game items have been painstakingly researched and hand illustrated. Exotic items such as fruit trees, wildflowers, fish, gems and butterflies are all correctly located in the regions they originate from. Players build ever more elaborate traps to capture the local monsters, while the baits required for each monster are influenced by both legend and local cuisine.

Players also create, manage and upgrade a Homestead which they can place anywhere in the world. This forms their base of operations and here they’ll farm other resources and optimize their crafting production lines. It’s also a great place to show off souvenirs from their travels around the world.

New quests are developed episodically, with hundreds available at worldwide launch and the team continuing to release new content every month. The first season is based in London and Europe, with the action then moving to Nanjing for season two. A further 4 seasons based on other continents around the world will follow.

The global launch also marks the release of the first localized version of the game – Portuguese Brazilian – with more languages to come.