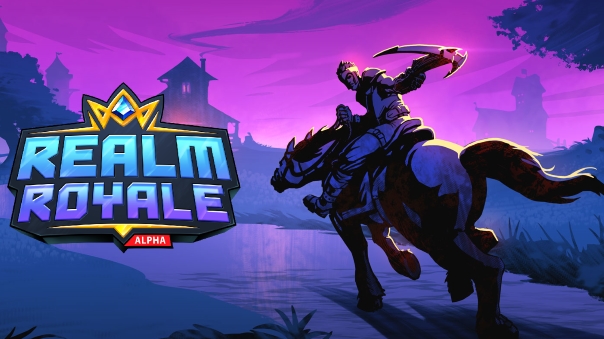 Even if you don’t like/don’t care about Battle Royale Games, you NEED to try Realm Royale. The MMO style may just hook you. – Ragachak, probably.

MMO PVP is some of the most enjoyable PVP in the online gaming sphere. Short, exciting matches where you can typically just leap in and out of them, like World of Warcraft’s Arena/Battlegrounds. But you know what sucks about MMO PVP? That in virtually every single one of them, your actual skill matters less than what gear your opponents grinded for. The ability to grind out gear or in some cases, spend real money for gear really takes me away from the excitement and thrill of trying to be the best. Then we come to Battle Royale games. They’re pretty much all the same right? The only standout for a very long time was Fortnite, that took the base game’s building tech and ported it over to the Battle Royale (which was a smart move, to be frank). Then along came Hirez Studios and Realm Royale. We’ve known they were working on a Battle Royale game for months since we played the Paladins Battle Royale back at HRX 2018. But the theme shifted, moving away from the Paladins lore characters and instead, playing would-be Paladins in the Realm. The way I perceive it is that those winners go on to move towards actually becoming Paladins (in the lore, not in… you know, Paladins). Plus, these matches tend to be incredibly short, whether you win or lose. I haven’t seen one gone more than 20 minutes or so at the absolute maximum, so you can get in, queue and queue again without absorbing your entire day. Below I’ll embed one of our Realm Royale streams for you to see what it’s like!

The lore helps me personally, get into the game, but it’s more than that. One of the reasons I find myself restless and bored with your average Battle Royale, is you play a nobody, basically. You’re just some generic character, scavenging for weapons. There’s nothing special about you, nothing to make you stand out or feel special. Realm Royale gives you a character class to play, an ultimate goal (see above), and each class is different, special, without one overpowering the other. Every class has something that makes them stand out and has their own Legendary Weapon to seek out and craft. Though I do think Paladins players might have a very slight edge, in that these weapons all come from the Paladins universe. You grab the Crossbow and know exactly how to fire, what kind of arc/distance to expect on the shot, especially if you were a Cassie main. This won’t really won’t make or break anything, but it sure does help you figure out what guns you do and do not like to use. The only real downside for me personally, is that most of the weapons aren’t weapons I use in Paladins. A pair of pistol-type weapons, Lian’s rifle, a shotgun, rifle, a sword. These are all pretty great and fire differently, and each class has their own “Legendary Weapon”. Fighters have Grover’s Axe, Hunters receive Sha Lin’s bow, Engineers get Pip’s Blaster, Assassin’s receive a Sniper Rifle and Mages get Inara’s staff. Each of them is interesting, and with the Elemental Addition to them, they are really powerful items and are a must-have.

On the topic of Legendaries, I don’t think they’re OP or game-breaking. All you need, as of my last match is “one” kill to get the mats to make one, and then some disenchanted items. That part is easy-peasy. I’m hoping in the future that additional Legendaries per class will be added for people who want to do other things, say, one of the healers’ weapons (Furia, Seris, Ying), or perhaps give the Engineer access to Torvald/Fernando’s weapons. I also think there should be some kind of support class, but I think the closest thing to that right now is the Engineer. They have a Shield, a Heal, and a Fire Bomb to keep people out of their face. It’s nice that you can’t really have all of the “class abilities” at once unless you want to get rid of their movement ability (each class has their own type of movement). I kind of wish the Engineer one had a bit more forward momentum, personally.

One of the things I’ve seriously enjoyed about Realm Royale is that no matter where you want to drop, there’s a forge pretty nearby, and that’s where you forge Legendary Weapons, Abilities, and Armor. You only need a kill for Legendary Weapons, and for some people, that might feel incredibly daunting. After all, a lot of really experienced Battle Royale fans have come to Realm Royale, seeking glory and victory. There are a few ways to approach the game too, whether you feel aggressive, or want to be patient and try and sneak a win away after everyone else has done battle (that’s what works for me the most if I can be honest). Each of the major sections of the map (Trinity Hills, Coldmist Village, Lost Forge, et cetera) have their own regions and has its own aesthetic/design to make it stand out. Though it does seem in my personal experience that the majority of the players want to play aggressive, and dive right into certain areas: Sentinel Hold, Gun Town, Goblin Gulch, the major/larger areas. These have arguably the most chests, and players are more than willing to sacrifice/disenchant unnecessary items to keep them out of the hands of the enemy: Even if their own team needs them. I’m not bitter, I’m not bitter about that at all.

Aggressive Strategy: This probably works best with Solo/Duo, in my opinion. You want to dive where everyone else is going to be because your skills and shots are so strong that it doesn’t matter what weapon you get. Hell,  you’re probably good with just the knife you start with. This is also great if you can start off sort of off of the beaten path. You don’t necessarily want to dive on the first chest, but you can grab a quick weapon. Then you leave the other chests and lie in wait. Pop pop, get that early Chicken. Know the spawns, know the important locations for the area you want to focus on, and lie in wait. I feel like Assassin is one of the best for this if you can unlock and an early Stealth. Shotguns, Pistols, anything that’s up-close and powerful is your friend. If you’re confident, you can come out of nowhere with the dagger though. I like to see Hunter/Assassin or Engineer/Assassin do this because one can go round up a barrier/utility skill while the Assassin does the heavy lifting. Instead of picking a different spot every time, try various spots in that same region. I’d drop early if you’re feeling ballsy because a lot of people want to get right into the action.

Playing the Long-Con: This is more my way to play. Sure, you can dive in and fight immediately and run the risk of dying. Sure, you have an easier path to a Legendary Weapon, which now also have some elemental properties to them, but I’m confident enough that I can pick one up later in the game, or simply find another Engineer and kill them for theirs. You want a small village, way off the beaten path, unpopular areas, grab a few items, then slowly ride around. Ideally, I try to find people already in combat with each other and scoop them. In this case, you aren’t leaving chests behind but instead leaving behind piles of loot, and lying in wait. Your average player can’t resist a free pile of epics to disenchant. Instead, just kill them! Sure, you get fewer kills in the long run, but I find I place much higher this way.

Overall, I love Realm Royale so far. It’s still in Alpha, so it’s got a ways to go yet. More character classes perhaps, more weapon types? I’m sure cosmetics are on the way that will no doubt capture peoples’ attention because if there’s anything Hirez can do, it’s making awesome cosmetics. I miss PVP that requires actual skill, and that’s a facet of PVP that’s we’ve fallen away from in the MMO sphere. Realm Royale takes actual skill. You aren’t always going to lose if your opponent has a better gun – that better gun doesn’t mean better skill, just more damage. It’s moving forward at a nice pace, and the latest talk of having Stream Snipers punished is something the BR community at large is after. Personally, it doesn’t matter to me so much, because I’m never going to be getting dozens of eliminations per game. I play Realm Royale because it’s fun. I could get there, but for the people it matters for, I’m glad to see it. There’s a lot to come for this title, and you’d be foolish to miss out on it.

Watch Realm Royale: Crown Royale is a Meal. from MMOhutsLive on www.twitch.tv