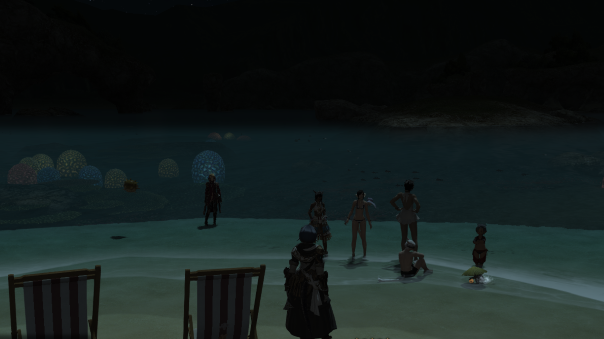 In today’s “Helping Hand”, I’m going to go over everything you need to know about the Final Fantasy XIV “Moonfire Faire” event! It won’t take long, depending on if you enjoy fishing, enjoy doing dailies/repeatables, or have a little spare gil. It lasts from Tuesday, August 8th, 2017 til Saturday, August 26th, 2017, 7:59 am [PDT].  The whole event takes place down in Costa del Sol, and the only time you’ll really find yourself leaving, if like me, you hate fishing, and head to the Auction Boards to buy some “Battered Fish”. That’s the easiest way to do most of this stuff, is buy as many as you need. The only worthwhile items from the Vendor are the food [Shaved Ice], portrait for your home [Moonfire Faire] and the Orchestrion Roll [Hyper Rainbow Z]. So where do we begin? Limsa Lominsa Upper Decks (x11.5, y13.8) gives you the quest “The Isle and the Faire”, which will take you to Costa del Sol. 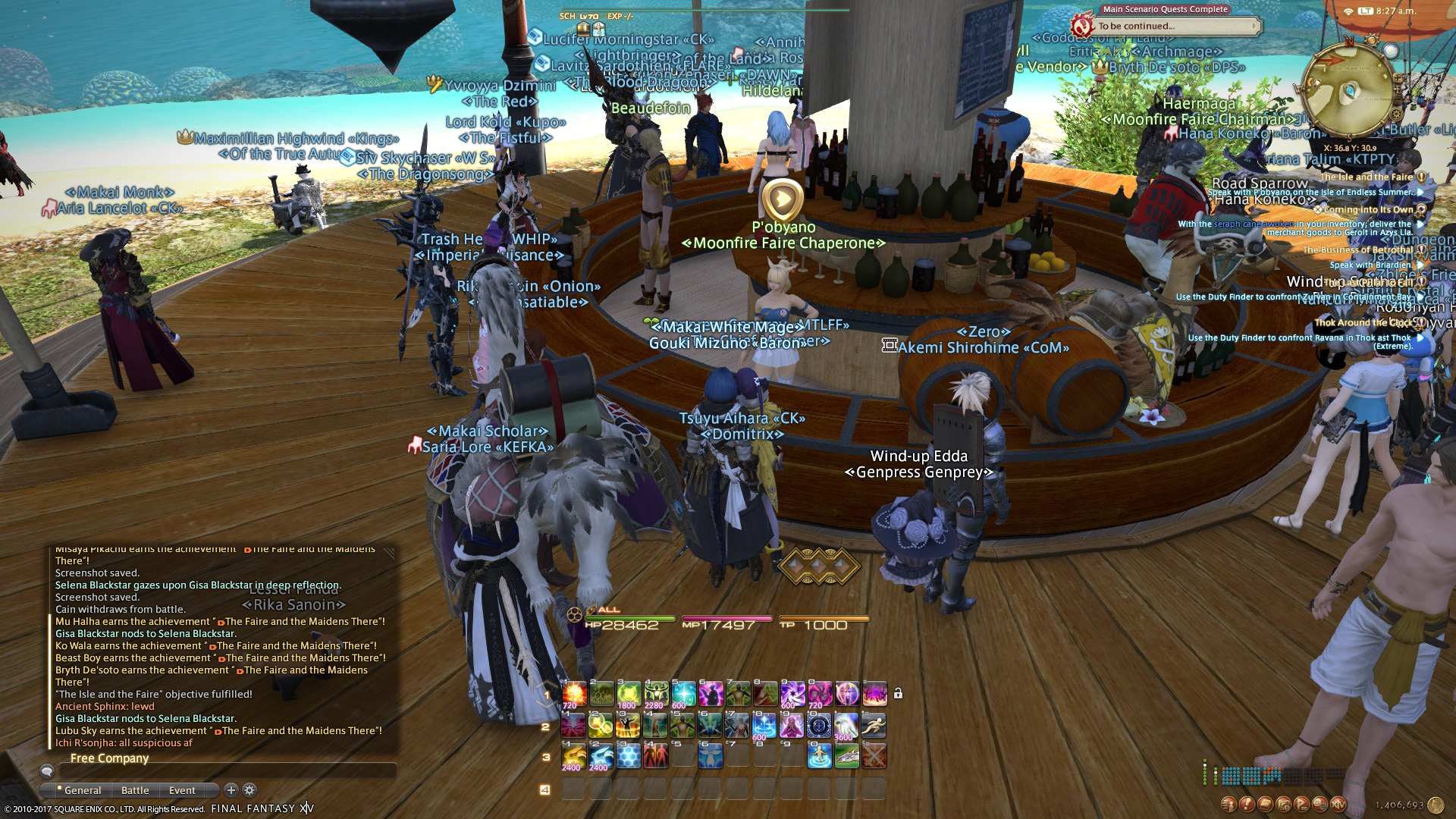 There’s a rumor abound of a rare, valuable treasure somewhere down by Costa del Sol. The Moonfire Faire is a way to bring all these people down to the water for some fun, fireworks, and treasure hunting! Originally, they celebrated by defeating fiery Bombards, but they’ve grown scarce. So instead we’re lighting fireworks down in the water to create the illusion of them. We’ll go meet the two Lalafel in charge of the event, who will get you to head down into the water and pop some fireworks. The first one you’ll get to is down by (x37.4, y29.4) and you can see them off in the distance due to the NPCs swimming around the fireworks. Not very safe, but they certainly stand by the principle. This gives you your first Faire Voucher XVII, the key to getting all your items for this event [save the outfit, that’s a quest reward]. 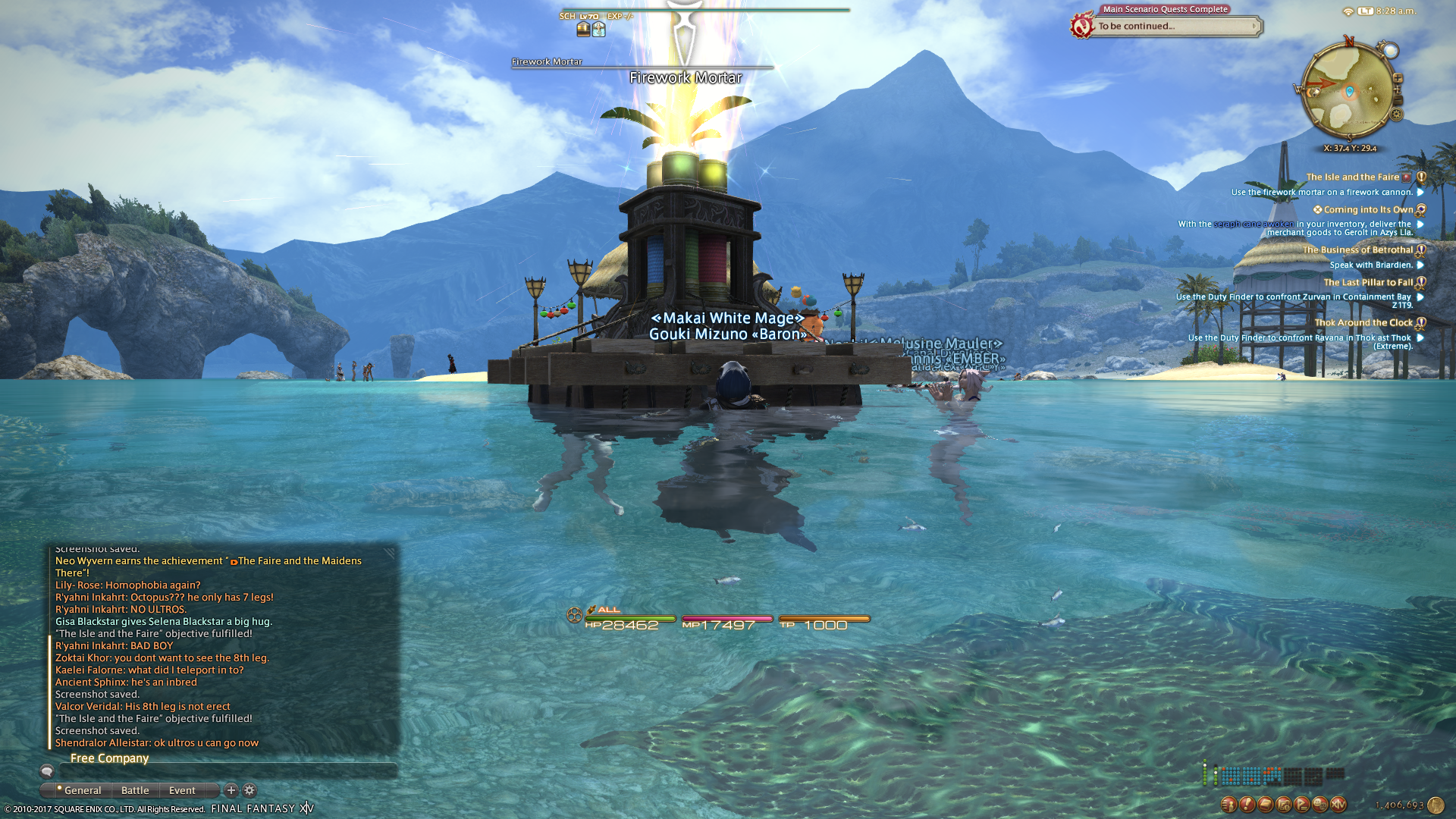 The next stop is  “The True Meaning of Summer” quest. This one’s very simple. You need 7 of the Faire vouchers, which you can receive in a variety of ways. You can do FATES down by the water, fishing up some fish, lighting fireworks on the water, or the easiest way, Battered Fish. You can buy it off the auction hall if you don’t cook/fish [like me, extraordinarily lazy] for [at least on Behemoth] 4k gil a piece. It’s very cheap, and you’ll need, ideally, at least 28 if you want the quest to be completed and come back for the Orchestrion Roll, one of the Meals, and the Painting. You can repeat these quests as often as you’d like, and if you just farm up/fish some fish and fry them up, you’ll be done with this part in no time. Get them all at once is much faster; do that turn in the tickets, and you’ll go to a meeting spot out on a peninsula. It’s located roughly at (x35.2, y34.7) and you’ll learn a little more about what this “rumor” is. 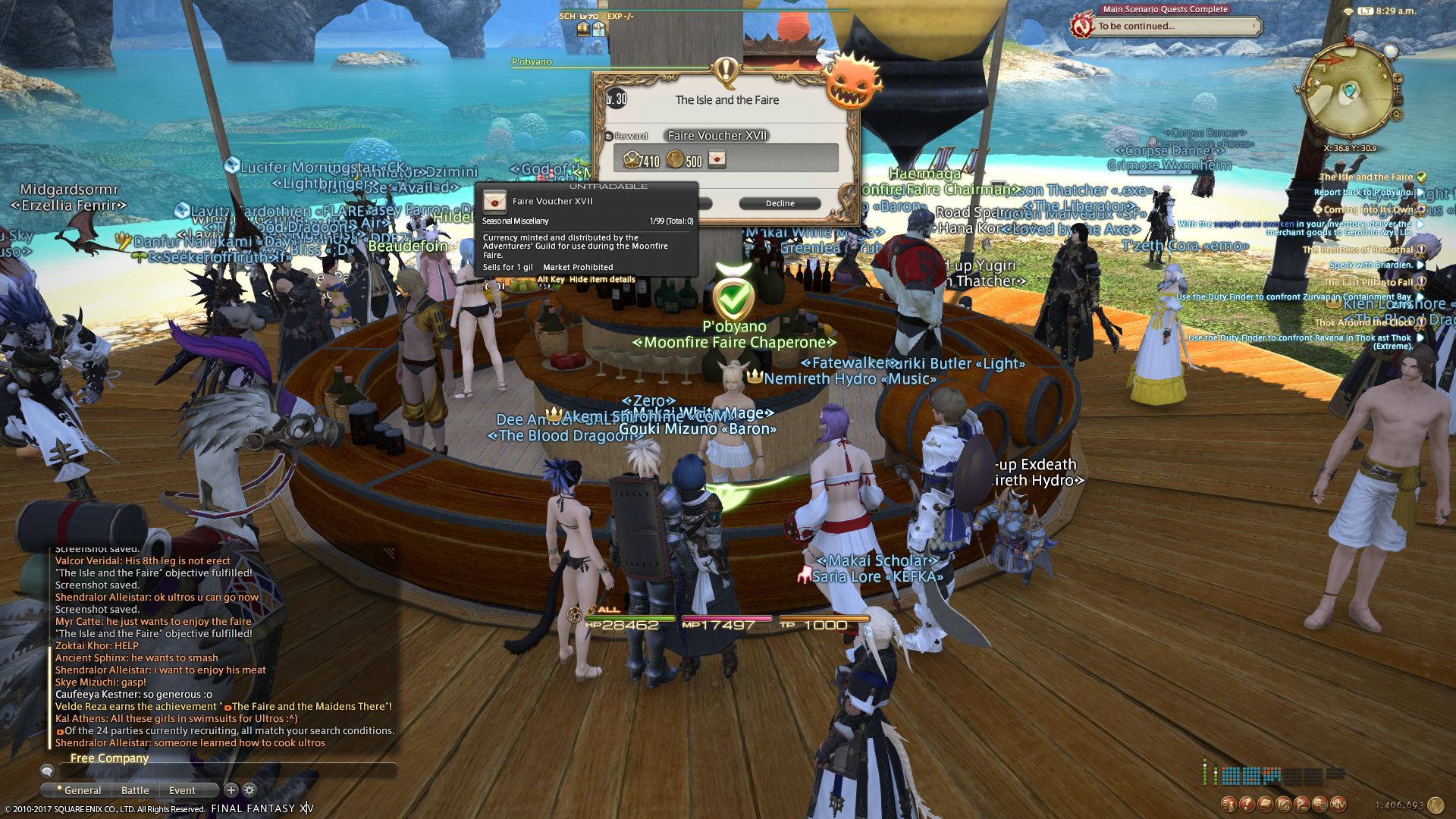 As easy as going to the Market!

The next stop for you is to go find the treasure, which is a Looking Glass/Spyglass. Your next goal is hilarious, but a bit weird. You have to figure out exactly what the diminutive male Lalafel was looking at: Spoiler, it’s not the muscle-bound “Brawny Man” or any of the other male bodybuilders on the beach. You have to wait for them to move, and then click on the bikini-clad women splashing in the water. Spying all four will move you forward. If you accidentally click on any of the dudes, you start over. Don’t worry, FFXIV’s very progressive. That’s what the bosses aid is looking at, the fellas. Once you’ve done this, deliver the spyglass of Gegeruju to Haermaga back at the Moonfire Faire stand (x36.7, y31.0). He understands immediately that they’re just a bunch of little perverts, trying to get people to show up at the beach in their bikinis/briefs, so they can ogle them and make some money at the same time. Won’t lie, it’s pretty smart. 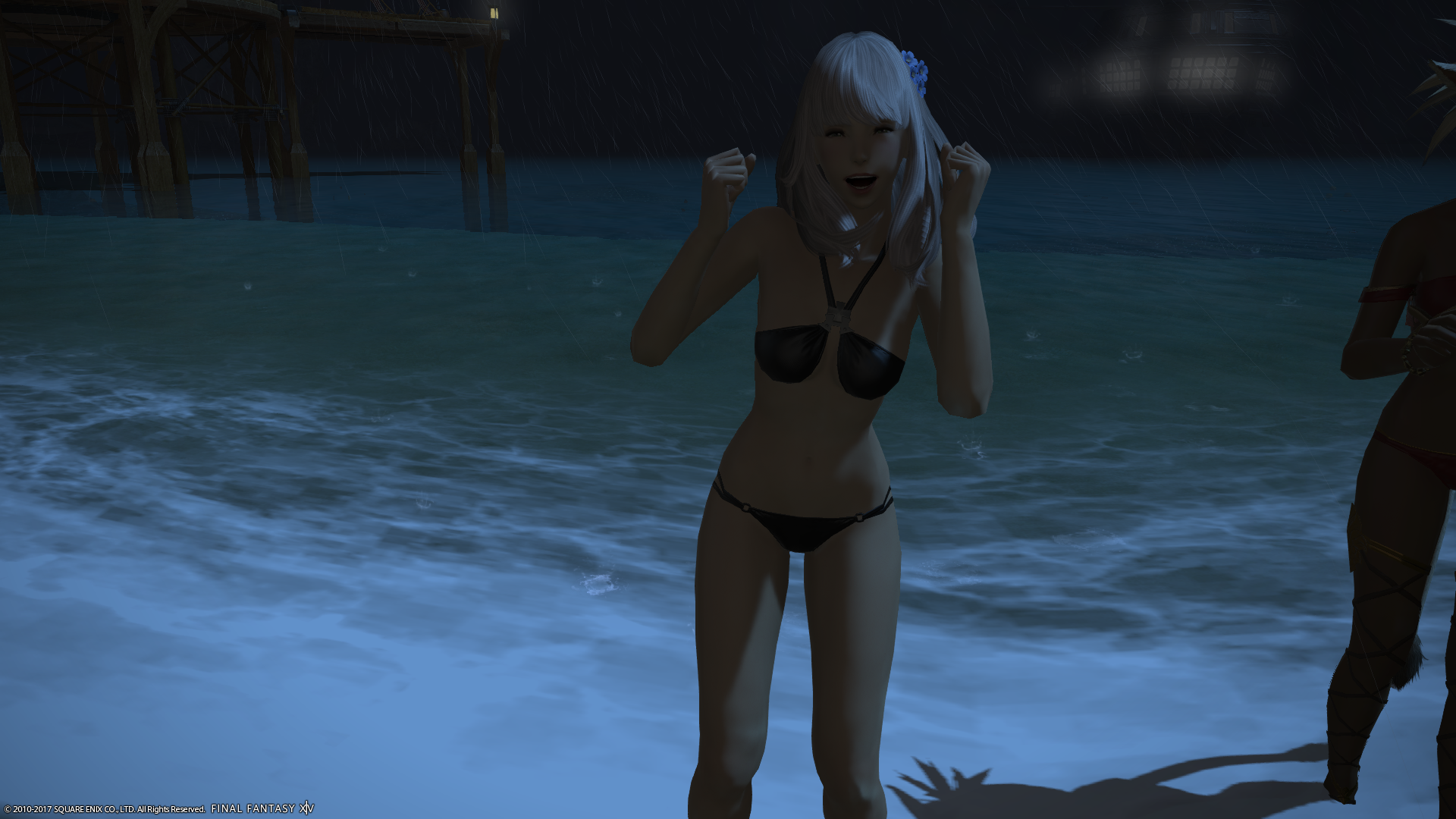 This is their goal. This is the valuable treasure.

That’s the end of the quest! You get a hilarious cutscene where they talk about their true motives, how smart they are, and some more spyglass shots of men and women alike [again, very progressive on their part]. This ends the Moonfire Faire unless you want to get the other items, which will require you to do some dailies/repeatable quests, unless, like I said, you are smart and just buy the damn “Battered Fish”. It’s cheap, it’s easy, and it will get you the items you’re after with minimal fuss. The quests aren’t hard, the same ones you’ve already been doing, but it will feel incredibly tedious after a while. So it really depends on how you want to treat the event. If you’re just after a few items and want to be done [like me], just buy the fish, and leave. Otherwise, you can come back every now and again, do a few more, get an item, come back later. It’s up to you! You have until the 26th of August, and it will really only take, depending on how fast you want it done, about an hour of your time. More than likely less, if you skip cutscenes and speed through everything. There’s only one other very important thing to remember, and that Ultros is down by the water! There’s a Level 35 FATE, “The Summer of Ultros”. The pervy octopus and his tentacles are attacking sweet, innocent girls on the water! Defeat him and defend his honor! He’ll hang out on the beach for a bit and then go on his way. 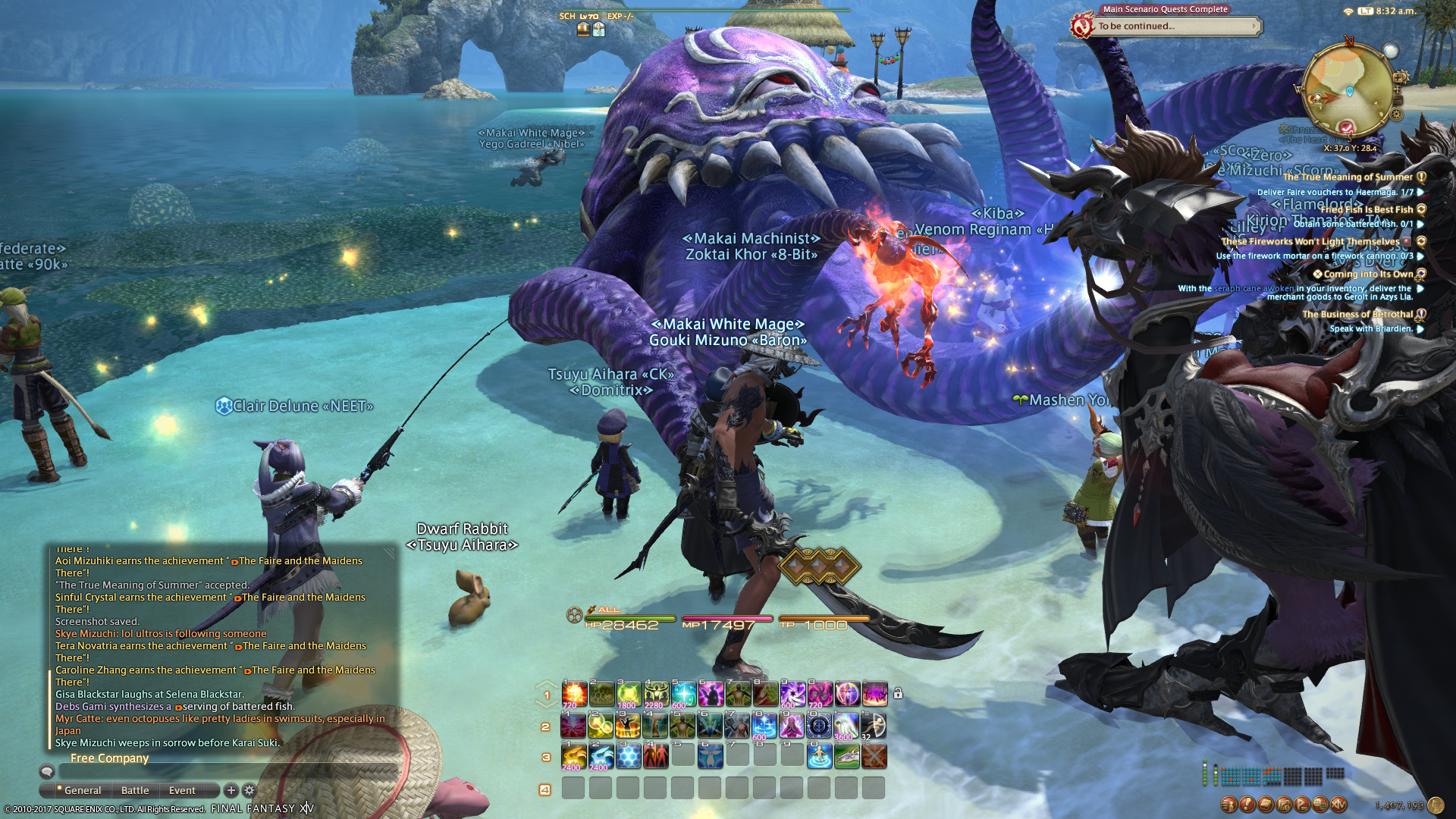