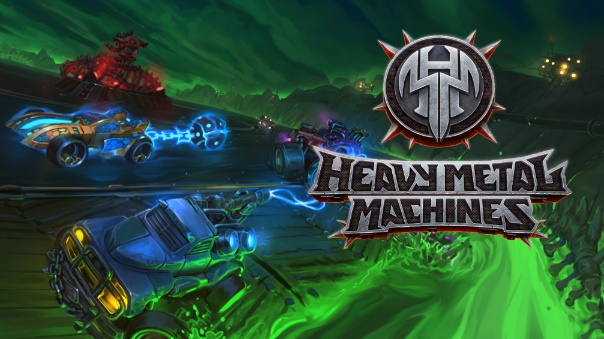 I’m a child of the 80’s and 90’s, and as such, played a considerable amount of SNES. One of my all time favorite games for SNES, for its music, its style, and its playability, was Rock n’ Roll Racing. To be honest, Blizzard’s brief foray into the racing genre was probably on par with the original Super Mario Kart for sheer fun factor.

Imagine my delight then on seeing Hoplon Games’ new free-to-play release, Heavy Metal Machines. You can see the influence of the old classic Rock n’ Roll Racing in Heavy Metal Machines without even trying, and better yet, they even got the original announcer, Larry Huffman, to do the announcing on the new game, and it’s glorious!

When you first start the game, you can choose to jump right into play, or go through the brief tutorial. The latter is definitely recommended, just so you can get a rough idea of the controls. Movement is all done with the mouse. Left button is forward, right button is reverse, and the cursor is what you’re steering towards, no matter which way the vehicle is facing. Every vehicle you play will have a different maneuverability stat, which will greatly affect your handling.

Currently there’s only one game mode in Heavy Metal Machines, the objective of which is to deliver a bomb to your enemy’s doorstep. This is done by attaching the bomb to your vehicle via a sort of electromagnetic tether. The team with possession of the bomb is offense and those trying to stop them are defense.

You start a match by either forming a party with up to three other players, or by queuing up solo. Once the requisite eight total people are found, the game chooses one of the three current arenas:  Cursed Necropolis, Temple of Sacrifice, or Metal God Arena. Each track has a distinctive flair and can play very different from the others, so you may choose your vehicle differently based on the tracks once you become familiar with them. What each track does have in common though are some of the obstacles.

Certain tracks might have additional things making them special, but what you can count on in each track are lava lanes (or acid puddles), bomb barriers, and droppers. Lava lanes do damage to anyone who drives over them. Bomb barriers cannot be crossed by the bomb, but can by the driver carrying it. If the driver carrying the bomb gets too far from it, the bomb’s tether will break, leaving the bomb open to being picked up by either team. Droppers will also make you lose control of the bomb, just by driving through their zone of influence. Each of these obstacles has great strategic value for both offense and defense. I’ll leave it to your experiences on the course to figure out just how to use them.

Next up is picking your driver and their vehicle. There are three categories of vehicles: Transporters are tasked with carrying the bomb, though any vehicle can pick it up when it’s free; Support, well, supports the rest of their team. They can offer their mates a bit of healing, typically, though the healing mechanics can vary widely; Interceptors are the name of the damage dealing vehicles, and their method of causing havoc can also be vastly different depending on which vehicle you choose.

In some ways, the variety of the vehicles has perhaps the tiniest hint of the Twisted Metal series. Some vehicles are faster, but fragile, others do great damage, but can’t turn well. For the most part, the game does seem to have a good handle on balance, though there’s a certain formula racer called Black Lotus that I like from the transporter class that seems to clean up in two of the three tracks. On the Temple of Sacrifice map, though, it’s hard to utilize Black Lotus’ speed to get away from your opponent’s interceptors, meaning if your team can’t bust them down fast, you’ll end up waiting for a rebuild.

I mentioned the game is free-to-play, which will of course have you wondering, “Is it pay to win?” In my opinion, no. Full discretion: I received a code to go with the game before reviewing it that unlocked all of the base vehicles. This means I can’t give you an opinion on how easy they are to unlock, or what the base selection is like, etc. What I -do- know is that you can unlock some vehicles in the ‘Metal Pass’ progression, and I would guess that the rest of them can be unlocked either with the game’s earned currency, Fame, or with Cash, which… is purchased with Cash. That is to say, you can purchase it with either, meaning they should be unlockable whether you spend real money or not. 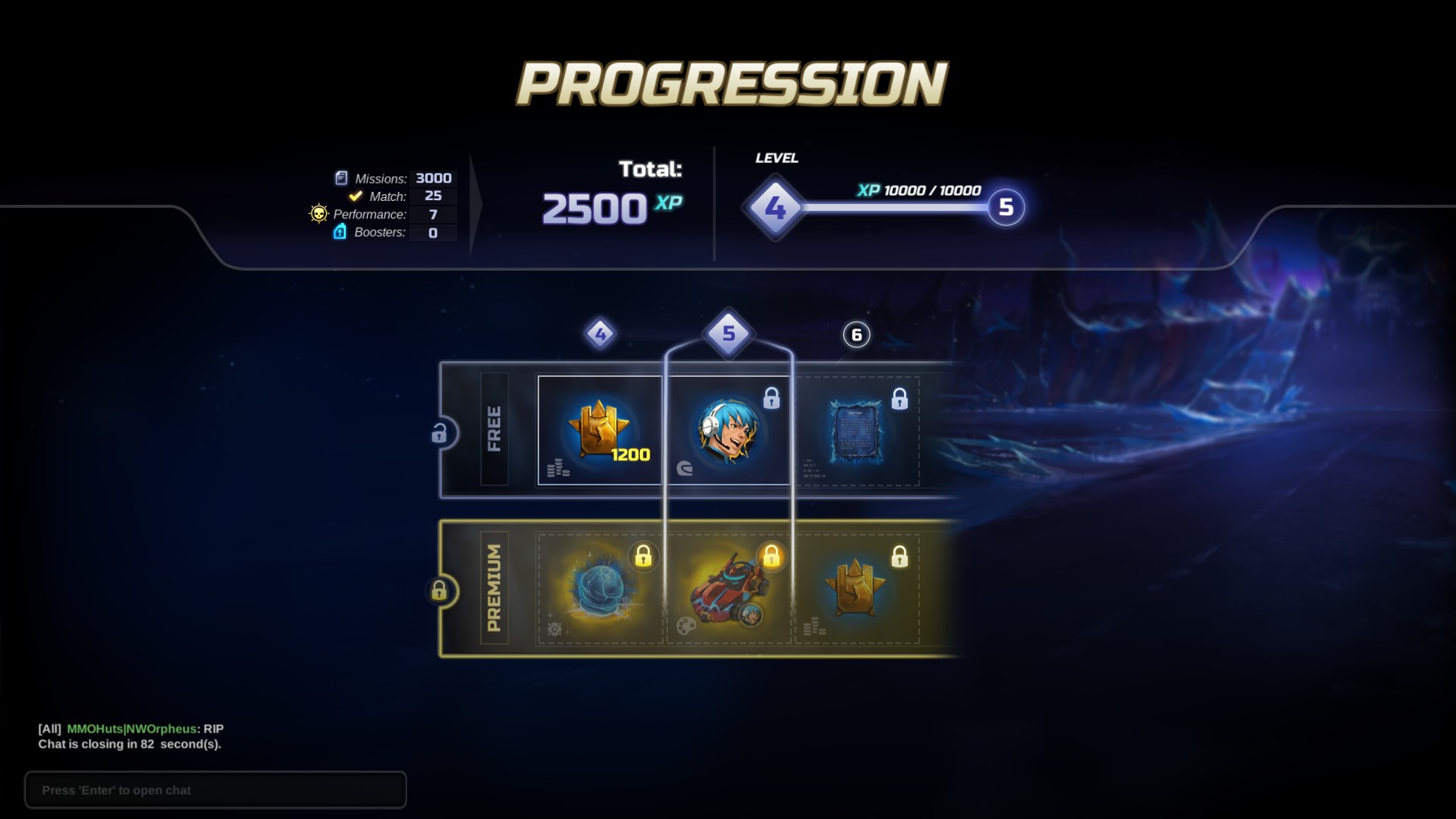 The Metal Pass progression is just rewards that you gain by leveling up. According to a video on YouTube there are 40 free rewards, including 4 pilots/vehicles, 2 models, 14 sprays, and 4 visual effects. If you spring for premium access, you get an additional 50 unlocks for 90 total. None of these are playable drivers that you can’t obtain another way though, as far as I can tell.

So, what about sprays and visual effects? Well, these are things that can happen at different times. When you start the race, when you die, when you rebuild, and when you score a point with the bomb. Sprays are simply tags you can leave on the race track. Sort of the vehicle version of teabagging.

I’d say that the only thing going against Heavy Metal Machines currently would be its lack of players. The lack isn’t severe though. Most times of day, from 10am to 11pm, it took me less than five minutes to queue into a match. What fans of the game do exist are dedicated, and the people on their Discord server are often willing to make teams and answer questions. The developers seem to have really cultivated a positive and helpful community. I do know that there were talks about tournaments for Heavy Metal Machines with cash prizes, which would definitely move the game more squarely into the limelight. I doubt I’ll ever be good enough to go full esports with the game, but maybe some day soon I’ll see you in a match.