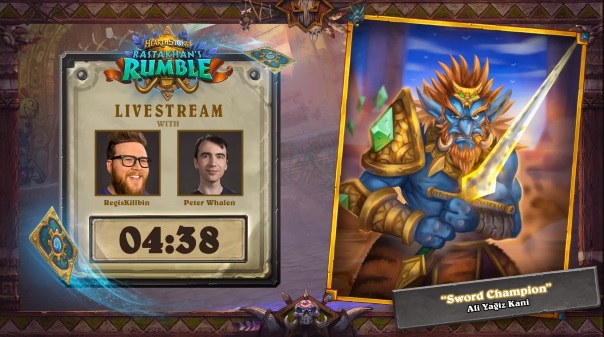 Hearthstone Lead Initial Designer Peter Whalen and Hearthstone Streamer RegisKillbin have revealed that King Rastakhan is accepting contenders. The upcoming Hearthstone expansion, entitled Rastakhan’s Rumble had several cards revealed in a recent stream, the VOD of which is below. In this reveal were a Legendary troll champion, and the Mage loa Jan’alai and her accompanying Spirit card:

The witch doctor is mysterious, quiet, and more than a little unsettling. Whenever he’s on the board, the player’s targeted spells also splash to adjacent minions.

The great dragonhawk’s Battlecry summons Ragnaros the Firelord if the player has dealt eight damage with their Hero Power during the game. In order to accomplish this magnificent feat, players can enlist the help of Jan’alai’s accompanying Spirit, Spirit of the Dragonhawk. While on the board, this Spirit allows the player’s Hero Power to splash to adjacent minions. The Hearthstone team also revealed a schedule of when more cards will be revealed, linked below.