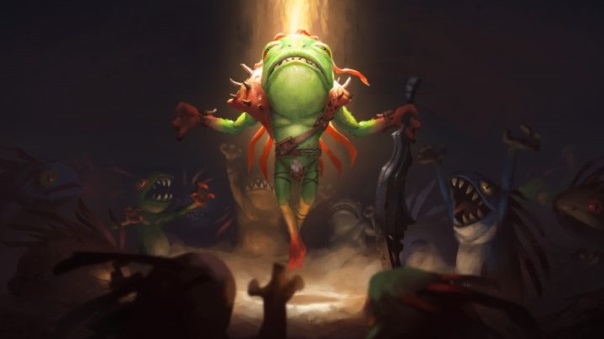 It’s about time I talked about a different card game, and over the last week or so I had a bolt of inspiration hit me! Not too long ago, Blizzard sent me some packs to crack for Hearthstone, a video of which is on our Youtube. One of the things that I said, repeatedly in that video is that “Okay, I’ll make a Murloc deck” because I kept pulling amazing ones out of my packs. I mentioned this to one of our Hearthstone reps, and he suggested a decklist, that I tinkered with slightly. Since I’m still getting back into the swing of Hearthstone, a lot of his suggestions made sense, and I tried it out. As a result, I’m 9-0 in Ranked and still climbing. The problem with this deck isn’t a usual one – I was hoping to lose to figure out my weaknesses! I still came up with some, but if it’s any consolation, it got absolutely battered in Casuals/Wild matches. It had no chance against Lich King Jaina, that’s for damn sure.

There will be video forthcoming for this, but for now, I’ll direct you to the livestream, that began with casuals where I got bopped and ranked where I began my path of dominance. Yes, I’m aware I was at the bottom of the ranked ladder, thank you guy in chat! I haven’t played Hearthstone actively in a couple of years, so it was nice to come back. One of the great things about this deck is the average cost of cards in it is 1-2, with a pair of 0 drops, and a tiny amount of big drops that while they don’t affect my Murlocs, they are neat when they hit the field. Shaman Murloc is an interesting deck, because it’s both aggro, mid-range, and late-game, depending on what you draw. The closest it’s come to defeat was a very strong Warrior Equipment deck that misplayed and cost them the match. That’s the way card games go though – you can completely throw a whole match down the drain with one simple misplay. But it did teach me what the deck is weak to.

This deck is a far cry from what I played when I first came to Hearthstone. Back then, I mostly played Paladin, with a deck heavy on Taunt and Divine Shield. It wasn’t very good, but it was fun, and that’s what mattered to me at the time. This feels more like Red Goblin Rush or Mono-Blue Tempo in MTG, in that you play one creature type (maybe two) that all synergize with each other. The more of them you have on the board, the better your overall quality of life is. It also features a few direct damage options for you to deal with pesky threats. More often than not, I ignore the creatures they have, forcing them to sacrifice their creatures to deal with mine. But there are always more Murlocs coming, friends. From Deathrattle Murlocs to Echo Murlocs, to making my Murlocs cost 1 Mana?! There are always more.

Video should be set to where the ranked matches begin.

Since about half of the deck are 1/2 drops, it seldom needs to reroll cards. I do find that I toss the Bloodlusts if they come to turn 1 because they always find their way back in the mid-game when I need them to seal the deal. I’d rather have my Sludge Slurpers and Grimscale Oracles on turn 1. The downside is that most of my turn one options are very easily killed by Jaina’s ability and most direct damage, to begin with, so I prefer to drop those Sludge Slurpers early to potentially get some really fun lackeys/minions on the board. The star of the deck doesn’t hit the board nearly enough, but he’s immediately a threat. I try to get him on the board after Coldlight Seer (Murlocs get +2 Health) and Murloc Warleader (Murlocs get +2 Attack). Scargil makes all of my Murlocs cost 1, so if I drop him mid-game, and next turn use Ghostlight Angler (Echo 2)? Now that’s Echo 1! This is even better if Underbelly Angler out (Whenever you play a Murloc, add a Random Murloc to your hand).

Ultimately, you want to flood the board with Murlocs and start hitting with them immediately. It took a little while, but I found a deck or two that absolutely floors this if it wants. Orc Warrior was able to keep my forces trimmed down for most of the game, and just bludgeon me with heavy equipment cards over and over again. That was the closest to defeat that I’ve come, at 1 life. All told, heavy creature removal does hurt this deck a great deal, but as long as you have cards in hand, you can come back. It doesn’t have very serious removal, with just two cards, so you have to rely on Totems for healing and damage if you get in a pinch. If my cards are a bit on the higher cost side of things, I’ll drop a totem in hopes I get a healing totem. Be advised though, this deck does run some Overload, and honestly, I do enjoy playing them in the early game, since most of my cards are reasonably priced in terms of casting cost. This makes, in my eyes, Mage and Hunter very deadly. But if they take greedy starts/don’t have board wipe, your Murlocs will pound them into so much grist. Hold your buffing Murlocs until you can get a few of the cheap ones out, and start swinging for the fences. Once I have four or so (maybe more) Murlocs, I drop that Bloodlust and go all in.

Scargil (4/4, 4 drop): Your Murlocs cost 1. I don’t really have a lot to say about Scargil. He’s amazing, and with a nice full hand of cards, he’s absolutely devastating.

Underbelly Angler (2/3, 2 drop): After you play a Murloc, add a random Murloc to your hand. I wonder if it also pulls from Murlocs not in the deck? This is amazing when paired with Ghostlight Angler (Echo) and the above Scargil. Flood the board with cards, and get plenty of Murlocs you can now cast for 1!

Grimscale Oracle (1/1, 1 drop): All Murlocs receive +1 Attack. Now I know, the other buffing Murlocs are better, but what makes him such a threat is I can drop him turn 1 or 2, and he absolutely must be dealt with, or risk losing at a very rapid rate. He’s bait, to get players to throw creatures and spells away, while also getting some meaty damage out of it.