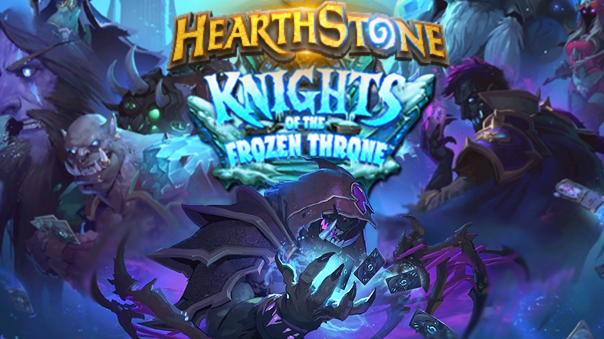 At long last one of most iconic and fascinating parts of Warcraft lore has made it to Hearthstone, the petrifyingly powerful Lich King has made his grand arrival.

From bone chilling effects to risky double-edged strategies and dastardly vampiric tendencies, Knights of the Frozen Throne expertly displays the horror befitting of the lord of all death knights – not even our mighty heroes can escape his corrupting grasp.

By far the coolest and most notable aspect of the whole expansion is in the new hero card type. Somewhat similar to Lord Jaraxxus, a hero card replaces your hero, triggers a battlecry, gains armor, and upgrades the hero power. Generally speaking, each hero card is fairly expensive and is used as a late game finisher or reliable combo enabler.

While that’s new and exciting there’s unfortunately not a whole lot else going on. Sure there’s a “new” keyword (it’s been in the game for a while just not under that tag), but for the most part  this set is an addendum to the deck archetypes that already exists. Granted I’d much rather have nothing than some garbage forced synergy. Haha, I mean can you imagine if there was some awful unreliable mechanic that was pushed for two+ expansions? Oh boy what a hoot. (Cries in Discard Warlock)

Anyhow, to make this expansion even sweeter there’s even a mini adventure to experience. Jump into the prologue for a humorous pseudo-cinematic which will introduce you to the theme of the set and even grant you a free legendary card. Also, there are 3 surprisingly difficult bosses to defeat with a pack waiting for you at the end with a few more wings to come over the next couple weeks.

In the vein of extra goodies it’s certainly worth appreciating the recent generosity. In the upcoming weeks we’ve had free packs, arenas, wins, and even double gold, in addition to the 3 packs on log in and the legendary + pack for doing the adventure. So, even if you don’t have 4985 gold saved up you can still join in on the fun with some the new cards.

The theme of the expansion has taken on a darker, colder, and generally more sinister tone than ever before. It’s exciting to look for all the little bits and pieces of Warcraft history or what-ifs like Shadowreaper Anduin and his frightening “The Light has left me” quote. Although there’s some crossover with the likes of Naxxramas and Whispers of the Old Gods, I still feel Team 5 has made a significant effort to differentiate this set from the previous ones through the gameplay itself instead of just through visuals. A couple of examples include the tidal wave of new lifesteal mechanics, the heavy pushing for self-wounding, freezing effects, and the general macabre nature of the new hero cards and abilities.

A Turn to Darkness

Essentially the biggest and best cards in the set are exactly the hero cards plus 3 others in Ultimate Infestation, because of its obscene multi-faceted power at 10 mana; Defile, due to its incredibly cheap and effective board clear; and The Lich King, a neutral 8 mana 8/8 taunt that gives you a Death Knight card (one of a variety of powerful token spells). I don’t doubt for a second that every single one of the previously mentioned cards will see regular use at all ranks on the ladder and for the most part in competitive play. Sure some will be used a lot more (Ultimate Infestation), and others will see significantly less (Deathstalker Rexxar), but because their baseline power is so high you’ll often see these cards even in decks where it doesn’t fit as well.

By extension, many of the major archetypes and combos being pushed by KotFT snuggly orbit around the hero cards and their powers. For example, Gul’Dan plays high tempo demons and ends the game by reviving them all back on turn 10; Andruin can OTK by constantly refreshing his voidform by building a deck of low cost spells; Uther’s top tier board control dictates the pace of every matchup and suffocates the enemy in the late game by evading death with a 5/3 lifesteal weapon and constantly threatening horsemen exodia; Jaina harnesses elemental synergy and a never ending stream of spells to make it to the late game and stall the match indefinitely with permafrost and significant lifesteal on never-ending Water Elementals; Valeera will never run out of cards with Shadow Reflections in Miracle Rogue; and so on.

This goes without saying but it’s incredibly difficult to say for for sure how the competitive/ladder landscape will shape up at the current time. Generally speaking it’s easy to say what was already good will continue to be good, but let’s take it a step further and make some bold predictions.

First and foremost Big Druid and Control Paladin will be tier 1 a staple in many tournament lineups and will see significant play at every elo. Following that I’m thinking taunt Warrior, Miracle Rogue, mid range Paladin, control Warlock, Jade Druid, and Secret Mage will compete around .75~1.5 tier lower – strong picks for sure, but not ubiquitous and not favored into a majority of matchups. And falling a tier below those will be the meme decks like OTK Priest and Discard Warlock; strong-in-others-metas-but-not-this-one Tempo Warrior, Token Druid, and Aggro Paladin; and fun, but simply not strong enough Mid Range Hunter and Evolve Shaman.

I’m roughly foreseeing a slower metagame where control options are able to survive an early beatdown and come back incredibly hard. Just Spreading Plague alone (summon a ⅕ taunt for each additionally enemy minion) is enough stop aggro dead in it’s tracks, plus factor in efficient board clears from both Paladin and Warlock and that just doesn’t leave much of an opportunity to get damage in. Of course, every expansion has people saying the meta will slow down, and it does initially but then speeds right back up; maybe that will happen here too. I don’t think so, but who knows?

I am in love with Knights of the Frozen Throne, not only is the theme badass but Team 5 has made it abundantly clear there’s still plenty of room for gameplay innovation in an otherwise fairly static format. Sure, there are some missteps here and there like with the please-stop-with-this-mechanic Discard and the nigh irredeemably terrible Princes, but the set as a whole has made the game significantly more interesting both in casual play and as a viewer of the competitive scene.

This expansion isn’t just amazing, it’s Team 5’s declaration to the world that there’s a reason they’re still the king of online collectible cards games, even after all these years.