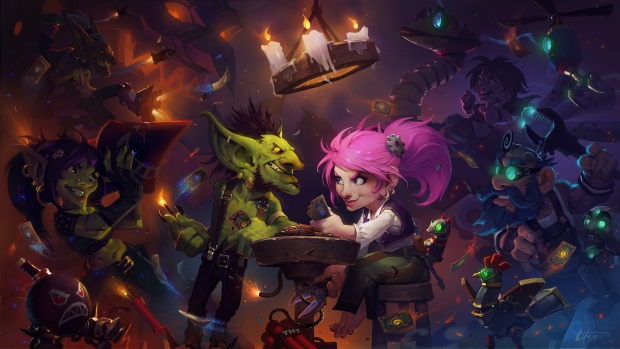 In celebration of the expansion’s release, Blizzard is offering anyone who logs in to Hearthstone between the launch and December 19 three free Goblins vs Gnomes card packs—a triple-powered jolt of mayhem to help players jump-start their collections.

“Goblins vs Gnomes throws a big wrench into the Hearthstone works,” said Mike Morhaime, CEO and cofounder of Blizzard Entertainment. “Players are already having a blast coming up with inventive new strategies and deck ideas—we’re looking forward to seeing what happens now that they can put those plans into action.”

Goblins vs Gnomes throws players in the middle of the epic rivalry between Azeroth’s audacious goblin engineers and their equally “adventurous” gnomish counterparts—and these pint-sized tinkerers are ready to stir up trouble. Their incredible inventions and mechanical monstrosities are marvelous to behold . . . but when Hearthstone players deploy them in a duel, the results can be quite unpredictable.

Goblins vs Gnomes is available now in the Americas region for Windows, Mac, and iPad®, and will be available December 9 in the Europe and Asia regions. Hearthstone: Heroes of Warcraft and Goblins vs Gnomes are coming soon to Android tablet devices. For more information, visit www.playhearthstone.com.