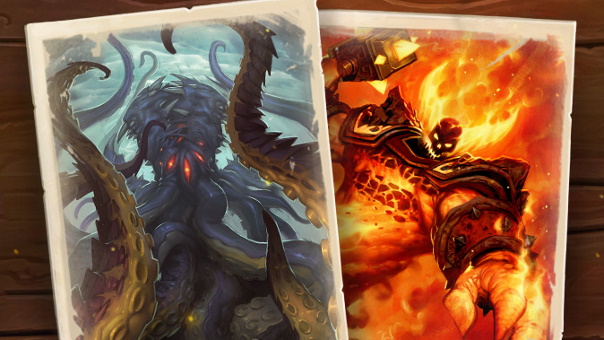 Now that the Tombs of Terror are in full-swing, Hearthstone has announced some new features and changes to the game. The community reaction to the recent Fire Fest-E.V.I.L. was an overwhelmingly positive one. so Hearthstone is committed to creating more of these large-scale experiences for the future. These will have new rewards, themed Tavern Brawls, and changes that could temporarily, or even permanently create new ways to play Hearthstone as a whole.

Hearthstone also announced that with the Saviors of Uldum ladder having settled down, they decided to shake it up just a bit. Several popular, game-changing cards will be coming back to Standard. This includes Ragnaros, the Firelord, and N’Zoth the Corruptor. This is for a limited time, and to make sure everyone can experience the chaos for themselves, everyone will be granted free copies of each card (these cannot be crafted or disenchanted either). On October 4th, the full list of 23 Wild Cards will be listed.

New class portraits were announced for each character class. But there’s a catch: You need 1,000 wins with that class first. In the next major update, each character class will have these new portraits available. There will also be a few quality-of-life changes added to the game as well. Alternate search terms will soon be implemented, making commonly misspelled or hard-to-type cards easier to find. A few quest changes are coming down the line: less popular quests will be cut, difficulty on more tedious quests will be tuned down, new quests will be added into the pool, and daily quests will be split into new buckets by varying difficulty.