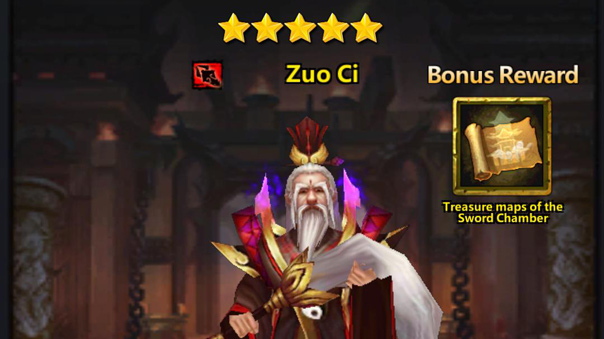 Introduction
Haunted Empire – Ghosts of the Three Kingdoms is a mobile game that has been quite popular in various places across the globe, and it’s now come to the English markets. The gameplay is similar to games such as Summoners War or Brave Frontier, but with a Three Kingdoms and Xianxia-style twist. You’ll be able to recruit units to equip and upgrade for battle, participate in the PVP arena, adventure through a multi-chapter campaign, join a legion, and much more. Haunted Empire strives to make sure the players always have something to do by providing constant rewards for completing various goals. Perhaps this will be the mobile game that all Chinese mythology fans will want to play. 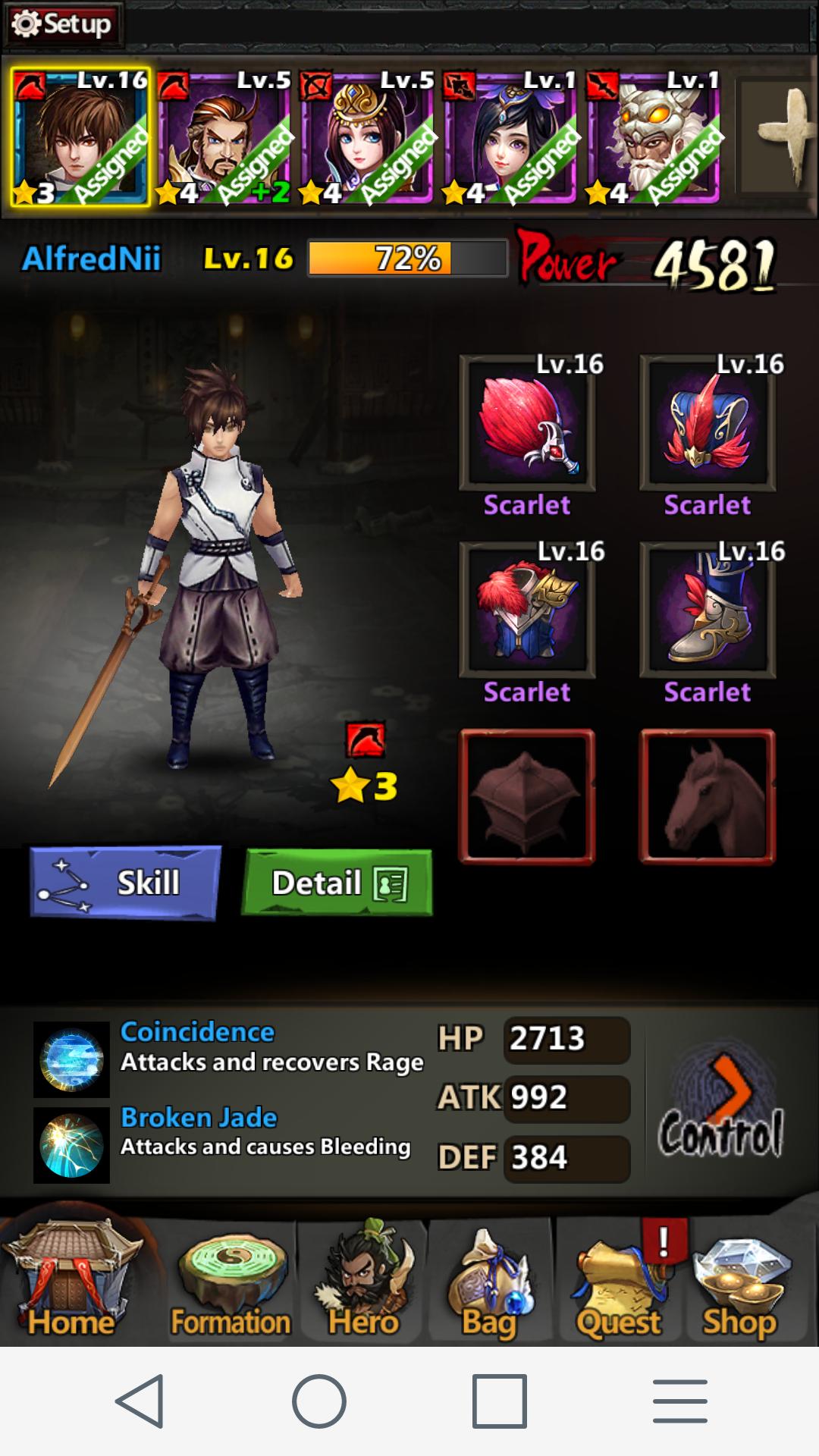 Graphics
The game features a mixture of 2D and 3D graphics. For example, the background artwork is all 2D and done by hand. The units in battle, however, are 3D and animated. There’s also the “hub” world that takes the form of a 3D globe that you can rotate to center upon various buildings you can make use of. As with most games of this type, the artwork is actually quite nice and you can tell a decent amount of effort went into its creation.

Controls
When I play a mobile game, there’s usually one thing that ruins it for me: The controls. Sometimes, even if your phone has the best touch-screen currently available, a game will just seem to be unresponsive. Luckily, this isn’t the case when it comes to Haunted Empire. The only time I had an issue with the controls was when playing the Bun eating mini-game, which was my fault (I tried to use two fingers, which apparently is a no-no). In general, I had no issues with the controls. 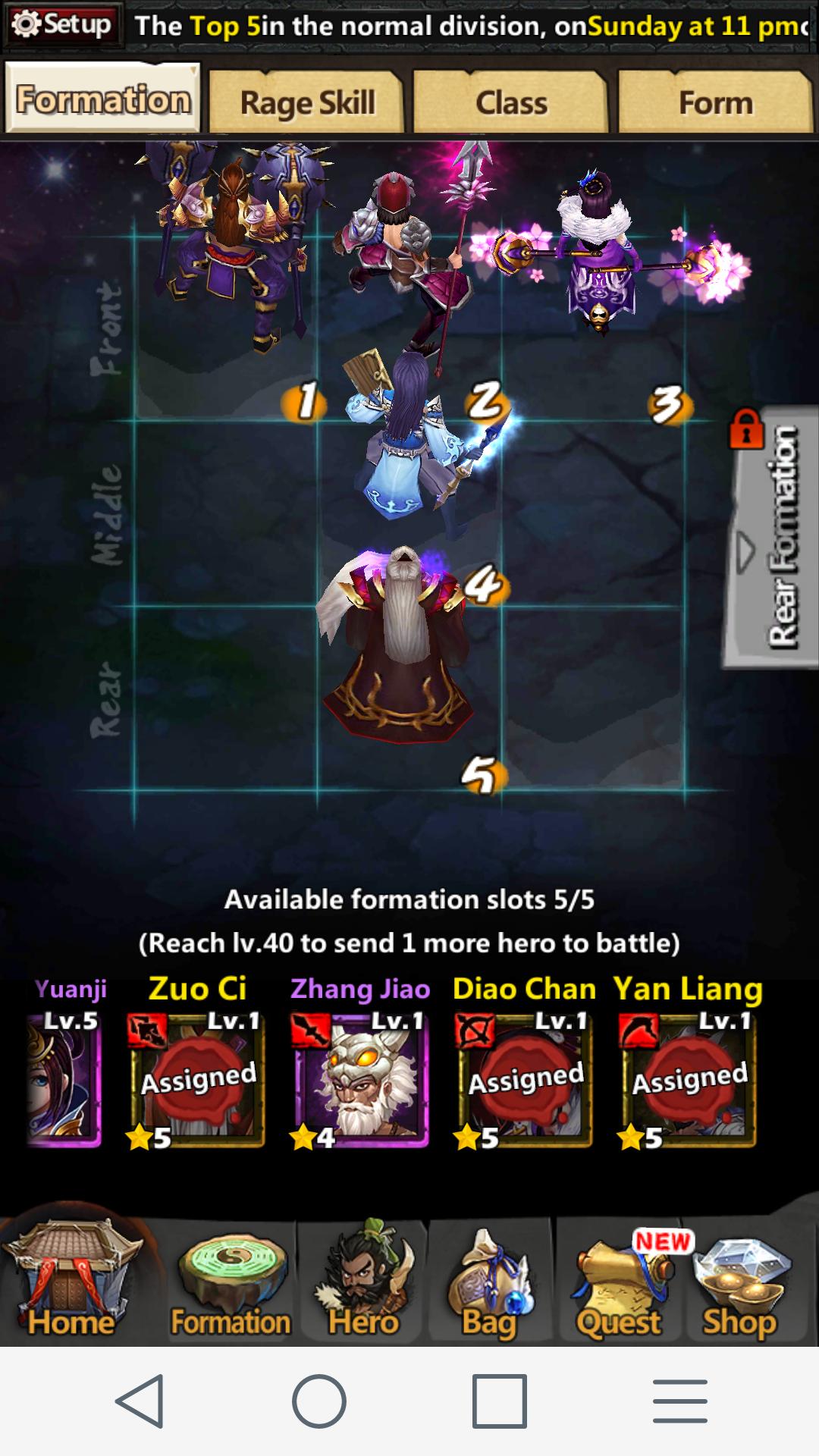 Plenty of out of combat decisions to make.

Community
The game seems to have a wide-variety when it comes to nationalities. I’ve seen just about every language spoken in the global channel. I even have a guy in my Legion who only speak Polish. This isn’t a bad thing in itself, but it’s something you might find odd when playing a version of the game that is supposed to be meant for English speakers. The good thing, though, is that most people seem to speak English in at least some capacity and they are friendly. When they decide to actually talk, that is. I don’t see many actual conversations going on – just a lot “Hi” when people want to meet the requirement for the daily reward for speaking in the Global chat.

Gameplay
Haunted Empire is definitely not the best game I’ve ever played. It’s designed from the ground-up to be, for those familiar with the term, a “Whale catcher.” That is, the game is designed to keep people playing and attract those that can sink money into the game. Most servers, while vastly active, have a small handful of players who sit on top of the leaderboards after having spent a few hundred dollars to get there. A vast majority of players, though, don’t spend any money in the game. And, unlike a lot of mobile games, Haunted Empire seems to use every excuse to give you gold that they can. For example, there was an update today and I was given 800 gold just because of the downtime, and I also got another 300 gold for simply logging on today. That’s $15 worth of gold just for playing, and the game also rewards you with gold constantly, usually in small 10-gold chunks.

Like I said, the game gives you plenty of reasons to keep playing. There are so many activities in the game that you could play for five+ hours a day if you wanted. That’s a lot of time to put into a mobile game, and most games seem to want to limit that. Of course, like most mobile games, Haunted Empire has a Stamina and Energy system, but much like the gold situation, the game will often give you rewards that replenish your Stamina and Energy reserves. Such as the Bun Eating event that happens several times a day, in which you tap a button repeatedly to cause a man sitting behind a massive plate of steamed buns to eat. 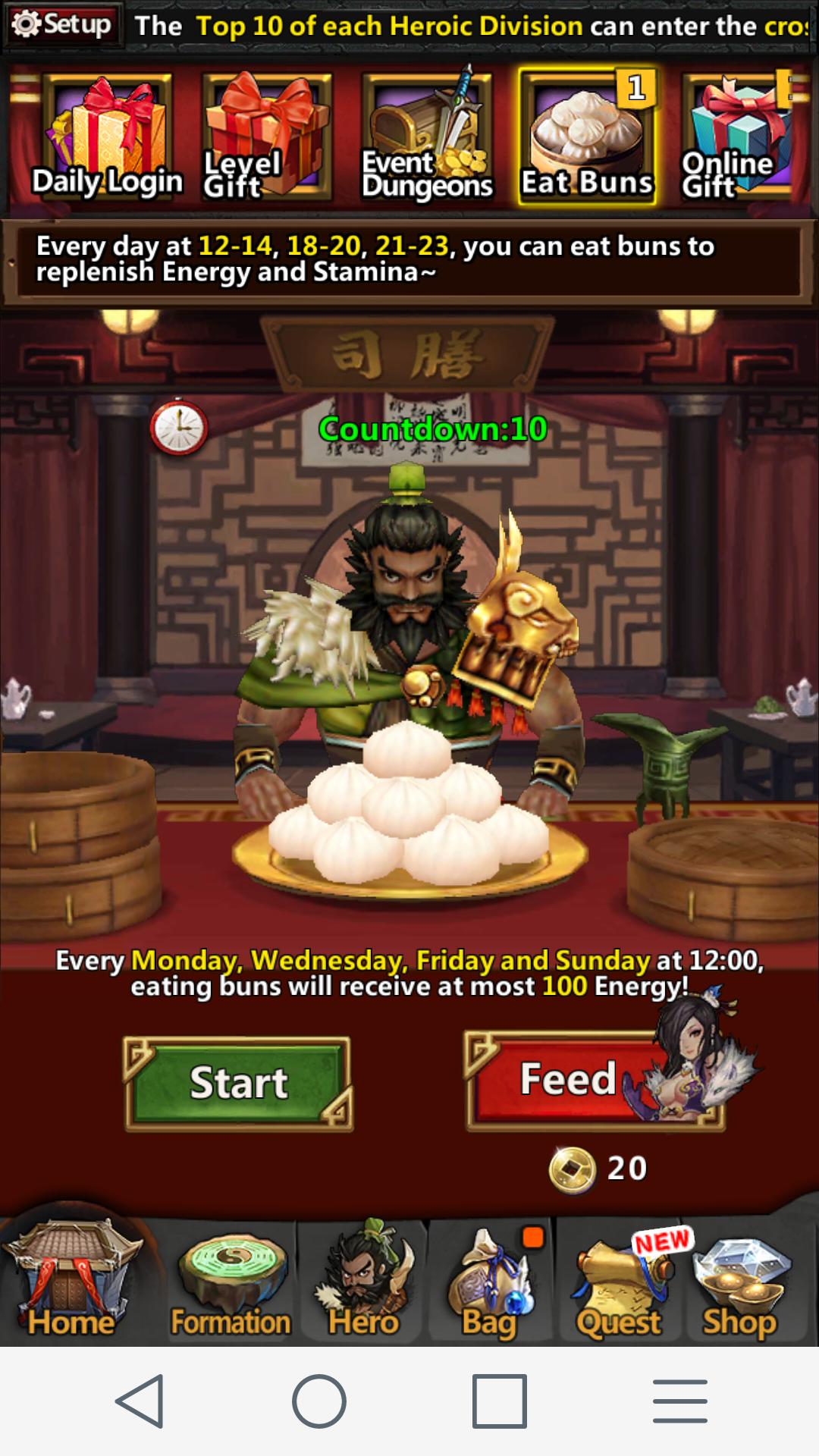 Gamers need role models like this to stay motivated.

Some of the activities you can do include a multi-chapter campaign in which the story of the game unfolds. Unless you’re already a fan of Chinese mythology and Xianxia stories, you probably wont find much interest in following this, though. Personally, I am (and a lot of Age of Wushu players might be) so I found at least some enjoyment at paying attention to the small cut-scenes. There’s also the arena, where most of the “PVP” happens. If you’re in a legion, there’s Legion battles to participate in where you can help your legion advance through the Legion ranks. You can shake the money tree and go on treasure hunts, as well. As you level up there’s more things to unlock, as well as a weekly event to participate in.

Combat is a lot less interactive than other games of this type. Most of what you can do in terms of combat is done before the combat is actually happening. Stuff like equipping your units, setting up your formation, or choosing your heroes rage skills. But that’s about it. You wont be choosing when to activate your Rage skills – that happens automatically once your Rage meter reaches a certain point – and you won’t be selecting targets. So if you can’t be happy with that, Haunted Empires may not be for you.

The units in the game are fairly interesting. There are various unit types – such as warriors, mages, and healers. You can choose a specific class for your hero character, but other than that it’s up to the luck of the draw. Unfortunately, there are only a handful of ways to get new units. These are through campaign missions as loot (though you won’t get anything very good from this), using Friendship points generated by PVPing against friends or calling upon friends to help you on special campaign missions, or using gold. For every ten units you purchase with gold, you are guaranteed a five-star gold unit (with red units being the best and the only way to get a seven star unit is through the evolution and demonization processes).

Like I said earlier in the review, the game throws money at you and just today I got 800 gold simply for logging on, so it’s not exactly hard to purchase ten units. As a regular active player it shouldn’t be unusual to do so maybe once every other day or two. But there’s a lot of RNG involved. You don’t know what type or faction the unit you get will be, and the units you get before the 5-star Gold unit will mostly be trash. Thankfully there’s an option to deconstruct units to get things like Jade (for the Jade store), copper, Advance stones (for advancing your units for extra stats and bonuses) and other such things. Generally, it seems like Haunted Empire treats you better in terms of creating a “Dream team” of units than a lot of other games like this I’ve played. 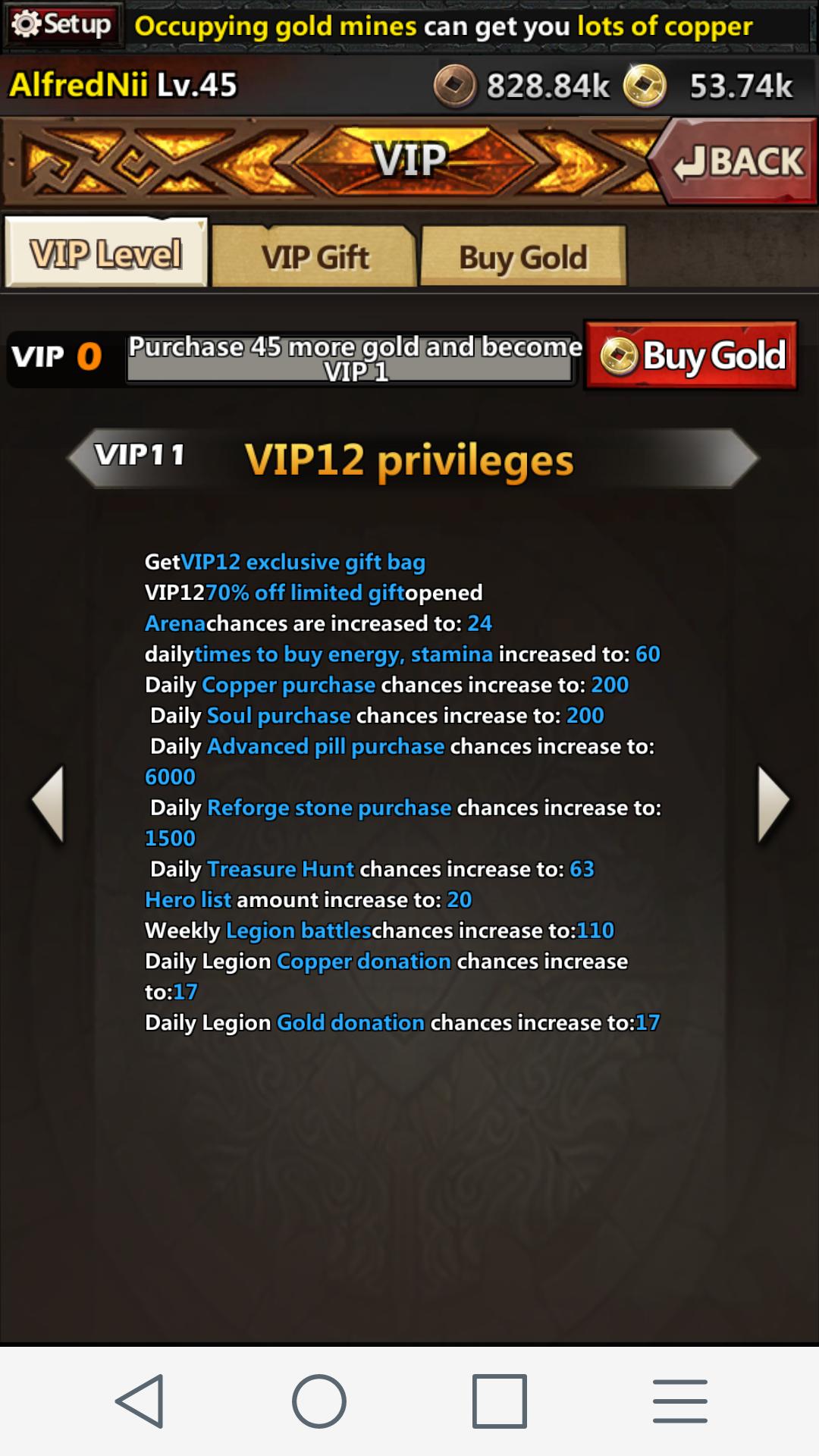 Last I’d like to talk about the VIP system. Unlike most VIP systems, you seem to unlock VIP levels by purchasing certain amounts of gold. From my understanding, you get VIP 1 for purchasing at least 45 gold. You can go up to a total of VIP 12, with each level unlocking more things, such as extra treasure hunting turns. In general, this means that the higher VIP level you have, the faster and easier you can progress in the game. So if you want to be the top-of-the-top, you’ll probably have to sink some money into the game.

Conclusion: Good
In conclusion, I have to say that Haunted Empire has some things going for it with some things against it. The game rewards spending money – it has to make a profit somehow – but it also takes every chance it can to throw gold at you so it’s not required to spend money to progress in the game. The gameplay is fairly typical of this genre, but it does have some differences and there always seems to be something to do. The major difference from other games, though, is the setting and story which probably won’t appeal to many gamers. In the end, I would suggest playing Haunted Empire – Ghosts of the Three Kingdoms if you’re looking for a semi-casual mobile game to play while doing things like work (I’m actually playing right now as I finish up this review).

Features: 4/5 – Lots of options and features to mess around with – you always seem to be busy while playing, though things do slow down in the later levels.

Customization: 2/5 – Honestly not much to work with.

Controls: 4/5 – Responsive and I had no issues.

Community: 2/5 – Not much community interaction, even in a Legion which is essentially a guild.

Overall: 3/5 – Not the best mobile game I’ve played, but (in my opinion) a good one to pass the time.