News >
News & Update Articles >
What Happened to Playing for ‘Fun’?

What Happened to Playing for ‘Fun’? 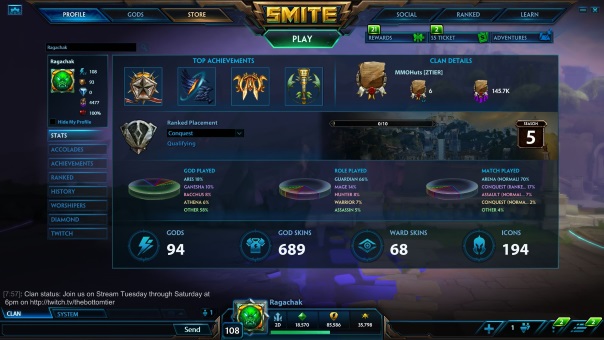 “I just play for fun.” I used to treat this as an excuse, something to be ashamed of. Don’t be though. It’s important to play for fun. This particular piece hits close to home, because it’s how I went from playing for “fun”, to being unreasonably competitive, and back around again. It’s important to know when you have a problem, or when you’re doing something negative to yourself or others.

What happened to us as a people, to shame people for just “playing for fun”? Isn’t that what video games are supposed to be? I’ve only recently really sat down and considered that. We’ve kind of gotten away from simply playing something because we enjoy it. That’s not the case for every game I play, but the principle is definitely there. So as I laid in bed this morning I thought back to when my point of view really shifted away. As a child – young adult, I had no one to play games with, so I stuck to my single-player RPGs. I didn’t have to wait or beg anyone to play with me, it was just me, the story and a grand adventure. I had a plethora of problems, and hid them in competition. It did not make things better. I found Magic: the Gathering around 1996, and began playing in earnest in 1997/8. At this point in time I still just played for fun, building whatever decks might be fun for me.

I wasn’t very good, but I had the mechanics down. The downside is that I was incredibly poor growing up (Hell, I still am now, but things have changed for the better), and I didn’t have the money to get serious for card games. As an adult, I had a job and college, so I didn’t have what I thought the time for trying to enter FGC tournaments. I always said that it was okay, “I was just playing for fun”. Part of me felt like it was an excuse, something to be ashamed of. I wasn’t good enough because I didn’t have money. But was it really so bad? Does everyone have to be a pro?
But I “wanted” to be. I hate feeling like I’m just “casual”. At the time it wasn’t a big deal, because the Internet wasn’t in my life. But then I found MUDs. MUDs are text-based online games, “Multi-User Dungeons”. Think early MMOs. At last, a game that I could dominate people in, and I did! I started slow, but I made some incredible friends and ruined quite a few more budding friendships with competition. On “Ethereal Mist”, a GodWars code MUD, it was a PK/RP MUD, where characters had classes and were basically immortals. I was good. I was “very” good. For several years I held the record for most kills, most status, most quests completed, and until the MUD died I did hold the record for highest status accrued on one character (54, when the typical cap was 25 and few people ever got that far). When people complained about not being any good or not being able to beat me, I’d mock them. They were just playing for fun this time. I was winning because I was good.

I had thousands of kills and would hold people down and kill them over and over until they quit if they complained about dying. Because it was a “PK MUD”. It wasn’t right and it sure wasn’t healthy. But I was good. Not once did I consider how they felt, losing over and over. But it is why I stopped playing PK MUDs and went to play more PVE-oriented games. It wasn’t even a relevant format at this point, nor was it healthy. MMOs were well on the way, but I was desperate to cling to this skill I had attained. There was nothing wrong with how those people played; that’s how I started too, after all. I had surrounded myself with a lot of negative people that really want to be the best and dominate everyone else, so I joined in on that style of play. My perspective would not be the same in video games for a very long time. Now, there’s such an emphasis on ranked/competitive play. There are so many players now that make a living playing competitively, and there’s a part of me, a large part of me that despite my age, wants to do it too. So when I found League of Legends, I started playing normals, for most of the first season I was involved (S2). I play support because no one else would. We’d lose game after game because someone would adamantly, “adamantly” refuse to tank/support.

Because it was a “girly” role because it was for . . . I’ll keep slurs out of this. But you can imagine. It wasn’t “cool” to support. So I did it because we needed one. That’s when I found ranked. At first. I had a team of five I could count on, and we started off Silver. I felt so damn proud of that. There’s a pretty wide difference, in my opinion, on how people treat low-rank players and high-rank. When you’re Bronze/Silver/Gold, you don’t really matter. The things you think effective don’t mean a thing, because you’re “just a Bronze” or whatever they say. It’s worse as a Support, because the culture breeds contempt for that role, despite being important to the team as a whole. It feels like you have less control over the game, over winning, because if you don’t pick a hard-carry support, it’s a more passive experience. Or so it feels anyway. I only hit Gold once in League of Legends, from Season 2 to 7. That was despite playing hundreds, thousands of games. I only played Ranked though. I’m Bronze 2 this season, with an 87% win rate. I “could” climb, but I don’t think I will try. It’s not fun.

When I found SMITE, I began to play League less. It was too frustrating, too toxic, and it was causing me a great deal of mental stress. It wasn’t so bad as some of my friends who quit, but it was negatively affecting my life. Not to mention I was playing it for work too, so I couldn’t escape. I was grateful to let someone else do the League coverage. I still to this day enjoy watching high-level play, but I don’t enjoy actually playing anymore. It isn’t “fun”. At first, I thought it wasn’t fun because I wasn’t any good. I think I could come back now and play normals and probably enjoy it. But I don’t want to. In SMITE, I don’t really play Ranked. I tried to, but I was horribly bad at Conquest, the “main” mode. I learned it after a season or two, but by then there was a new map (Kudos to them, by the by. Love that map). I am capable of playing a ranked match or two now, and not letting it affect me or ruin my day if I do poorly. Why?

Because there’s no damn shame in “playing for fun”. In SMITE, I primarily play Arena Mode, whether it’s on our stream, or just in the afternoon when I have nothing going on. I feel no shame, no disgust, I just pick whatever dumb thing I want and jump in. Usually, it’s a Guardian, but I feel like I can impact the game while playing a Guardian in Smite (no matter what game mode). SMITE helped a lot. I had people I could play with who enjoyed playing at a casual level, to just do insane things and see how they work out. For the most part, nobody complained about a lot of losses. We’d just queue up and go again. Sure, there are vile bits in their community, that’s every online game. But I have to say, it helped. Having that new way to approach MOBAs, and to be able to do so and have fun? SMITE has had a positive impact on my personal life. Through it I’ve met people that I’m sincerely glad to have come across, and I can just play for fun. Do I think anyone, with proper time dedicated to their craft, “go pro”? Absolutely. Part of me still thinks I could if I had the time to devote to it. Many online games it seems, hold down people in “low rank”. If you have so many games played down in that level, it seems to think you belong there. That’s the perception of it, at any rate. But never be ashamed if you simply play for fun. That’s what it’s all about. No matter what reason you play an MMO, a MOBA, or whatever, enjoy it and have fun. Unless you play to troll, flame, feed, or elsewise ruin a game.

I’m not really big on BR games/Fortnite style games. We were talking about it one night on stream, and a friend suggested we play sometimes but focus just on having fun first. That’s my problem. I was trying to play and just be good right out of the gate because I’ve played several of this kind of game. But I wasn’t good, and so it wasn’t fun. He was right, and so was my boss when she said that we’ve gotten away from just having fun. Maybe esports did it. Maybe we did it to ourselves. In the end, you can try and climb and be a professional. But don’t let it consume every part of your life. It’s important to have fun. I’m able to play MTG again, too. I stopped because it was too expensive to keep up with, and I wasn’t having fun anymore. But with MTG Arena, I have a feeling I can finally play again. I found a deck that was fun and I run it. We need, as people who love video games, to get back to playing for fun. Not everyone falls into this trap, but enough do. SMITE and Paladins both helped in their own ways. I can still play them competitively, and take a step back and play for fun. Having positive people around helps as well. No matter what you play, have fun doing it. If fun for you is grinding for hundreds of hours to be the best, then, by all means, do it. But the moment it stops being enjoyable, take a step back. Your health, mental or otherwise is important. My mental health was already a wreck, and putting that pressure on myself was only making my life worse. It’s nice to have that burden taken away.