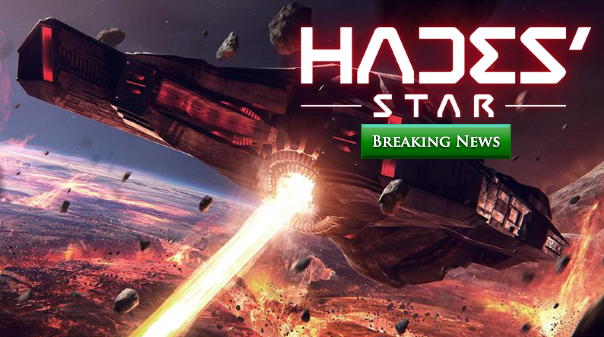 Back in February, I previewed Hades’ Star, an original free-to-play mobile strategy title from Parallel Space. At the time, Hades’ Star was wrapping up its time in alpha testing, yet showed remarkable polish and promise – enough for me to claim that the game is in a “class of its own” on mobile. Since then, the game has progressed through a beta test and a soft launch period, officially launching in late July. Andreas Papathanasis, game developer at Parallel Space, invited me to return to Hades’ Star to see how the game has changed and grown since its full mobile debut.

Since April there have been three major updates to the game (detailed in full on the Hades’ Star development blog). Each patch note is extensive with new content and adjustments for game balance, and I have no intention of covering every minor change. Instead I’d like to highlight a few of the major changes that have impacted or left an impression on the state of Hades’ Star today.

One of the most distinct differences noticeable since my days in early alpha is found in the Red Star systems: a player-created method of PvP in an otherwise co-op only game. To explain this, let me step back a moment. Red star systems are time-limited systems with bountiful resources, most important of which are research artifacts. Red Stars have always been public; that is, multiple players can appear in a single system when it is created, based on other players searching for a system at the same time. This was something I had no chance to experience in alpha, due to the lower number of players, but which is common in the live version of Hades’ Star. While in alpha, I always hunted star systems alone or with corporation friends, I now find myself always hopping into a star with two other players, each at their own jump point in the system. 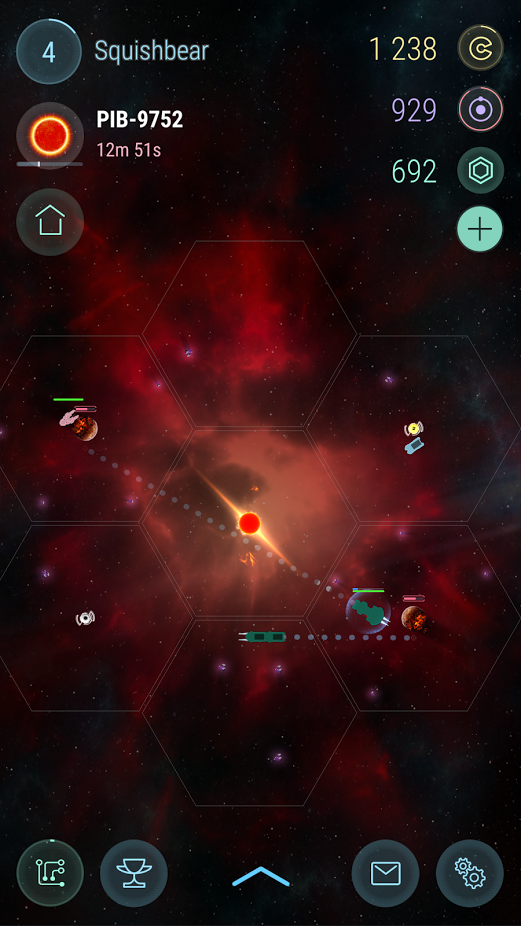 These star systems have multiple planets full of artifacts, some better than others. As you might imagine, this encourages some players to try to edge their way to the best artifacts, or to gain more, leaving the others in the star system with less rewards. However, players have also come up with creative ways to try to ‘attack’ other players by blocking or inhibiting their ships so that they can claim the most profit. One of the more common ways this is seen in early game is the use of EMP, which disables all nearby ships and the ship using the attack. By carefully moving battleships into key positions, a player can use EMPs to halt trade ships from reaching a star via one direction, while their own trade ships fly in from another direction to gather the haul.

This new competitive element is an unexpected one for the developers, and one they are watching closely. There are aggressive corporations already formed which keep count of how many players they “kill” in red stars, that teach methods of hostile actions in Red Stars, and even corporations that host their own private competitive Red Star stages. “It’s definitely not what the game was designed for,” Andreas commented to me as we talked about this issue in an informal interview. “It’s a little bit worrying to see that kind of thing happening.” He went on to explain that his greatest concerns for this behavior are whether it may drive new players away who are not aware of or welcome to this kind of behavior, as well as whether it will form a toxic element to the community. On the other side, he also recognizes that this system may also enhance the gameplay or hook more players in long term. 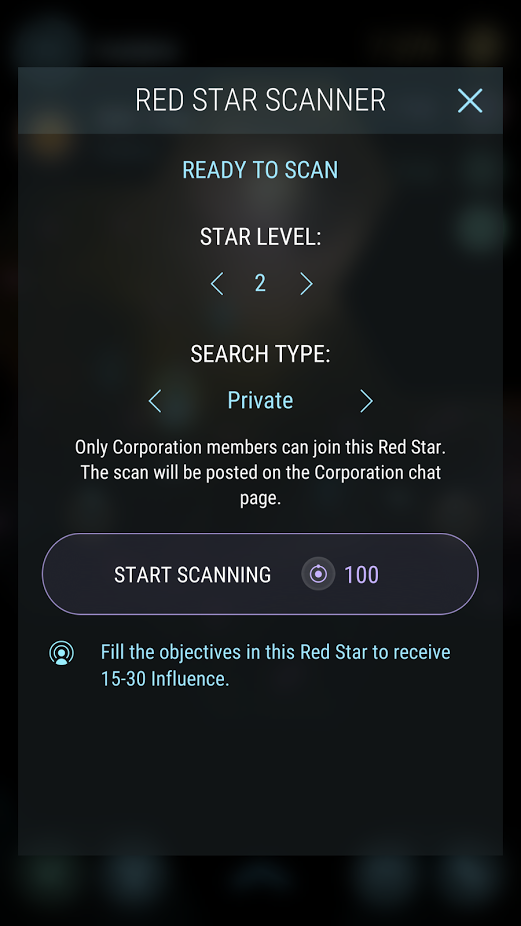 One solution that Parallel Space has since implemented is the ability for Corporations (the equivalent of guilds in Hades’ Star) to create “private” Red Stars. Any member of a Corporation can choose to begin a Red Star search as Private. These systems will not be available to random public players, although they are posted to the corporation’s in-game chat so that players can actively visit, hop in, and help each other. Because Corporations can also be made private, players can choose to take advantage of this system for solo play, or with a limited group of friends, if they don’t want to partake in other open corporations. In short, players can avoid the public “PvP” by creating their own corporation, or joining an open corporation in hopes they don’t encourage friendly fire.

This is not the most ideal solution for this emergent PvP system, and yet it may be one of the fairest systems Parallel Space can offer. As we talked about the situation, Andreas said “We’re probably going to stay away from changing the rules themselves,” explaining that adding additional systems like newbie protection or different rules depending on the level of the red star will add a lot of complexity and new special cases that may confuse players. The team is keeping a close eye on how this PvP situation is forming and how it effects the community – which, to credit, has remained positive despite what outsiders might see as griefing – as well as considering its influence on any future modules they create. 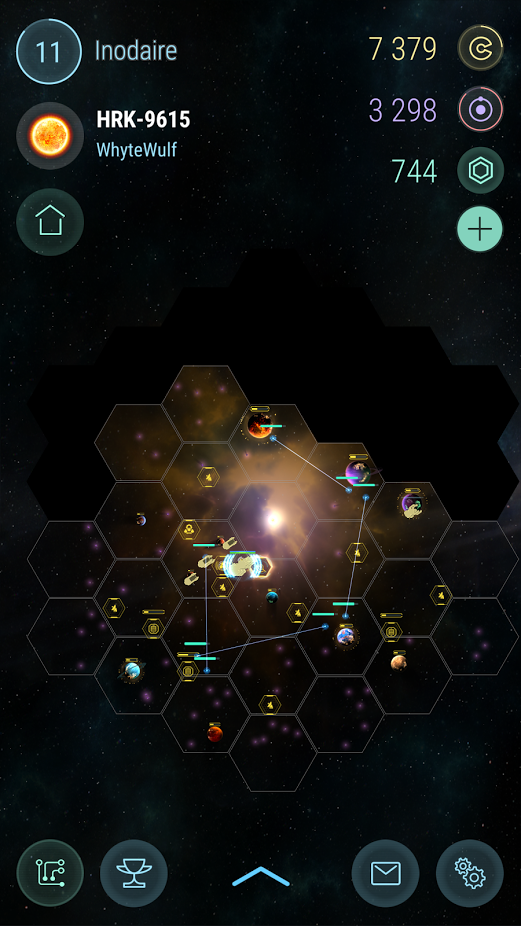 One of the Top Player's Systems

In the latest major update, Parallel Space also changed the way the ship upgrade system works – which plays directly into how Red Stars impact the player experience. Previously, each ship had to be upgraded individually to higher tiers and at a substantial cost. The result, however, was that losing a single ship would be a long financial setback. As such, many players (including myself) preferred to not upgrade ships at all, finding it easier to throw away lower tier ships than risk the painful loss of an upgraded ship. Now, however, ship upgrades are permanent for each player and affect all ships in that player’s fleet, current and future. While the cost to upgrade ships to a higher tier is increased, the overall cost and impact of a lost ship is significantly lessened, making it easier to recover from a bad battle and to experiment with modules.

Another change that’s small, but impactful, is the new ability to move many of your created stations such as research stations and shipyards to new locations within your system for a nominal cost of hydrogen (the game’s fuel resource). During alpha, these stations would remain permanently where they were placed, which often led to crowding or inefficient routes caused in the early game. Now, players can move these more optimally in their system. The key exception to this is the system scanner, which serves to unlock additional sectors in the yellow star system based on adjacent hexes. While some players feel that these scanners should be able to be moved rather than become useless after a full area discovery, they serve as a primary progression marker. To remove that gating can ruin the entire gameplay flow.

The Yellow Star system, Andreas explained, is designed to be expanded over a long period of time, and reflects the changing dynamic of gameplay as players manage an increasingly larger space empire. Remarkably, no player has yet to fully uncover their yellow star – the top players are only about 60-70% of the way to completing this core goal. “We’ve been tweaking the higher levels continuously since the alpha,” Andreas tells me, adding that the team is waiting to see what gameplay emerges after yellow star systems are fully unlocked. “We need to look into what people actually are doing after they unlock [their system], get their feedback, and we’re going to be doing tweaks there.” 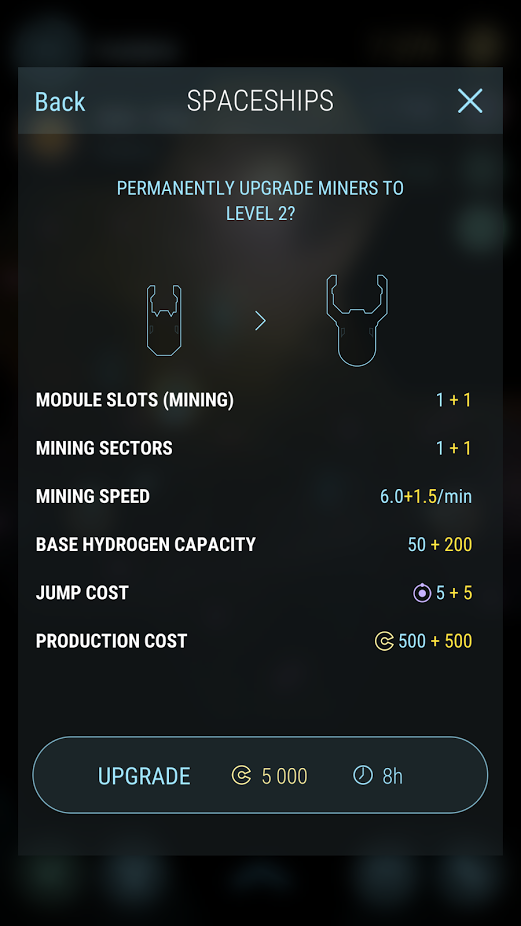 I also discussed the game’s business model with Andreas, which has not fundamentally changed since its alpha days. Hades’ Star remains ad-free (Andreas explains his stance on this in a blog post) and offers two types of microtransactions. The first is the ability to purchase crystals, the game’s premium currency. Crystals can be converted to coins or hydrogen (which are also carefully capped by a player’s level, to prevent too significant of an advantage), or can be used to speed up the progress of system upgrades. The second is a one-time, $5 purchase which grants crystals and a permanent 10% reduction to the cost of ship build and upgrade prices. It’s a very simple “pay to go faster” system, but while other strategy games offer this in a competitive environment where it quickly translates into pay to win, there is no true competitive advantage for players to gain. The game’s pacing is also designed to be so gradual that a small kick to speed is minor at best – noticeable, and appreciable, but not necessary. Still, the player response is positive so far to this business model, Andreas tells me, and that so far, the model looks sustainable.

Andreas also noted that there have been a lot of requests from new players for an option to restart the yellow star system, but they are hesitant to act on that feedback. “Because it’s a free game, and expectations are different, we’re getting a lot of those kinds of requests,” he said. However, the team would rather focus on improving the new player experience to reduce problems in this area, rather than simply offer a simple restart button. I can side with Parallel Space for two reasons. First, many free to play mobile games see a great deal of abuse of a restart system, with players spending sometimes hours restarting their game to get an ideal first hero or card pack draw. Secondly, the slow pace of Hades’ Star gameplay, along with the flexibility to move stations, means that players who hang in the long term really feel no early game regrets. There is really nothing you can do to screw yourself over as a newbie in Hades’ Star, even if you feel you might have bungled an initial choice.

“We’re hoping we can be sustainable and can continue updating for years with new star types, new module types, maybe new ship types,” Andreas offered as we closed our conversation. “We want to make a game that’s exciting to come back every day to see what’s happening in your space empire.” So far, I remain confident that Parallel Space is on the right track. Hades’ Star is a truly unique mobile experience that even people who don’t typically enjoy sci-fi or RTS can find themselves thoroughly engrossed in. With frequent updates, attentive developers, and a positive community, let’s hope together that Hades’ Star continues to grow.