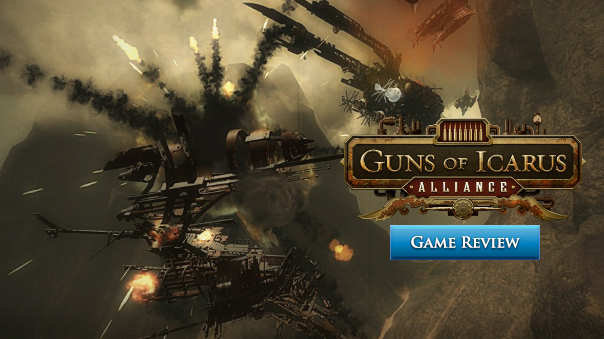 Guns of Icarus: Alliance is the recently released update to Guns of Icarus Online. It originally started as a Kickstarter to fund a PVE-focused expansion for Guns of Icarus, but since successfully funding it has grown to become a separate – though not isolated – game of its own right. It has many similarities to vanilla Guns of Icarus, but unlocks in one game translate to the other, and purchasing Alliance also gets you access to the PVP-centric Guns of Icarus.

Customization in Alliance is roughly the same as in the base game. You are free to customize the costume of your character, using unlocks from either the cash shop or through achievements. You can also customize which tools your character brings into battle. The coolest thing, in my opinion, is the ability to customize the loadout of your ship and other small variations that really have a large effect on how you and your crew fight the battle. Could there be more? Sure. But I was quite satisfied with what I found.

Character customization is interesting. You can freely switch between the three classes: Captain, Engineer, and Gunner. All classes get access to tools from each class, but your active class choice restricts what you have access to. For example, you may only get one engineer tool as a gunner, but as an engineer you would get three. The actual list of overall tools is quite small, though, but their differences can cause wide variations in gameplay. 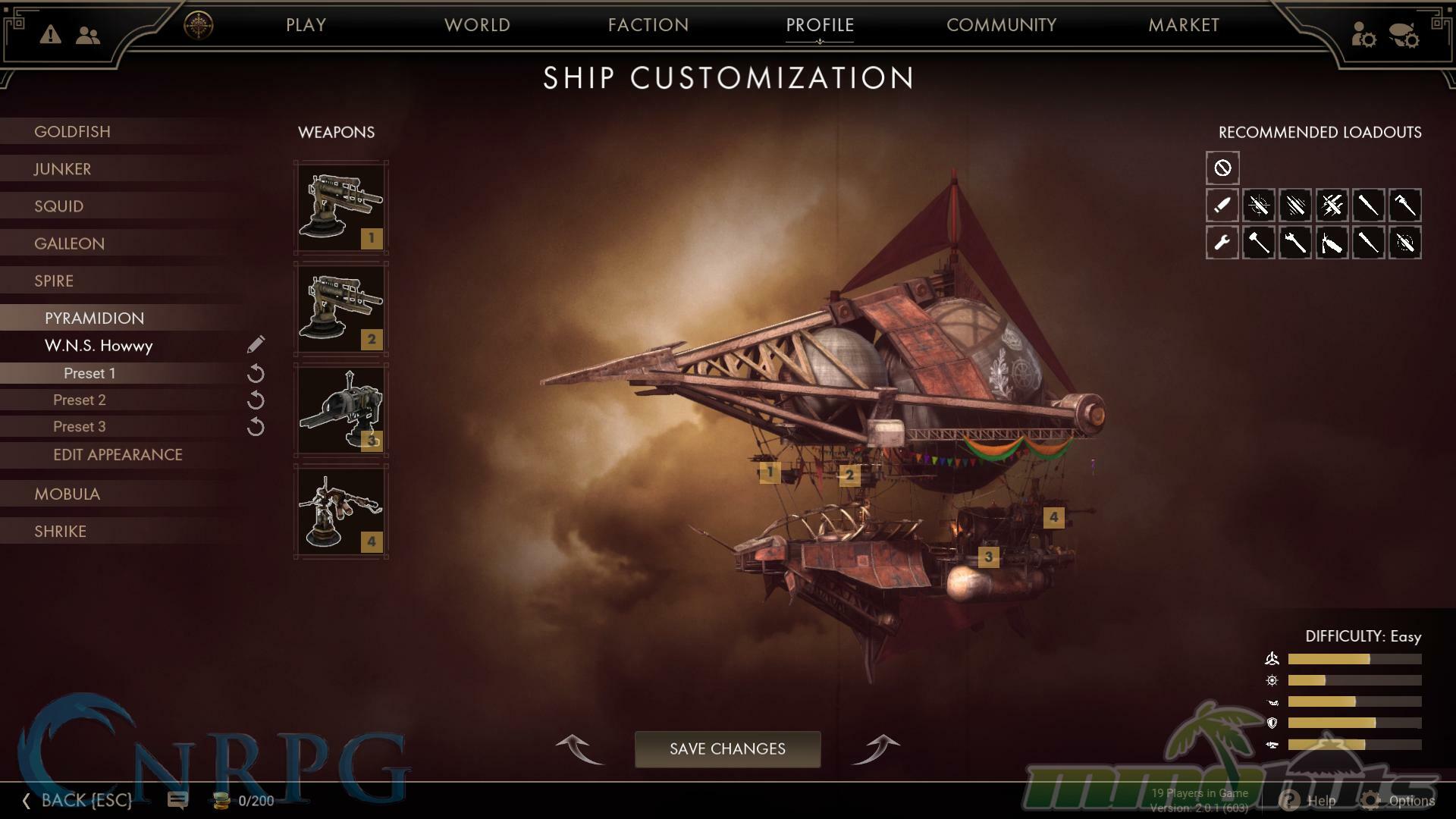 My favorite customization in the game, however, is the ability to select the loadout for your ship. A lot of these team-based vehicle games (such as Blackwake) tend to have a very limited amount of options, meaning you end up against the same thing over and over. While there are certainly Flavor of the Month loadouts, I can safely say that I am frequently surprised by some of the loadouts I come across. Some of them are borne of ignorance of newbie captains, and some are well thought out experiments from veterans. Either way, it adds a lot of spice to the gameplay.

The graphics in Alliance are the same as in base Guns of Icarus, at least so far as I can tell. I didn’t notice a single difference. That being said, the art style and graphics are superb. The style is somewhere between cartoony and realistic, with the color scheme really setting the tone for the setting. Guns of Icarus has aged well in that the graphics are still up to par to this day. Though the frequent use of particle effects, such as smoke, clouds, explosions, etc. really means you won’t spend much time focusing on finer details. One of my favorite things to do this game, even after years of first playing it, is just look around. It makes me wish Guns of Icarus was an MMO with a vast, seamless world to explore.

Controls in Guns of Icarus: Alliance work well. There’s sufficient options to allow for a decent amount of customization in the control scheme. Interaction and Camera are top-notch, and I’ve only ever noticed a few isolated issues. It’s rare to have a game where the controls don’t frustrate me on some level, so coming to Guns of Icarus is always a nice treat. In short: the controls work great.

The community in Guns of Icarus was small and tight-knit. With the release of Alliance, this community has grown but remains tight-knit. Part of the reason the original game had a small community was due to the repetitive gameplay, which sent many players after other games in time.  With Alliance introducing PVE and the meta map, the game has a lot more content and so I believe the population should retain decent numbers this time, and perhaps even grow.

Gameplay in Guns of Icarus: Alliance is greatly expanded upon from the base game. The two major changes are the addition of the Meta Map, which turns the game into a persistent Grand Strategy game, and the introduction of PVE gameplay. Prior to Alliance, all gameplay in Guns of Icarus was PVP-only. The closest you could get to PVE were random sandstorms on some maps. Like I mentioned earlier, that got kind of stale. Alliance, however, has completely revived the game and my love for it. 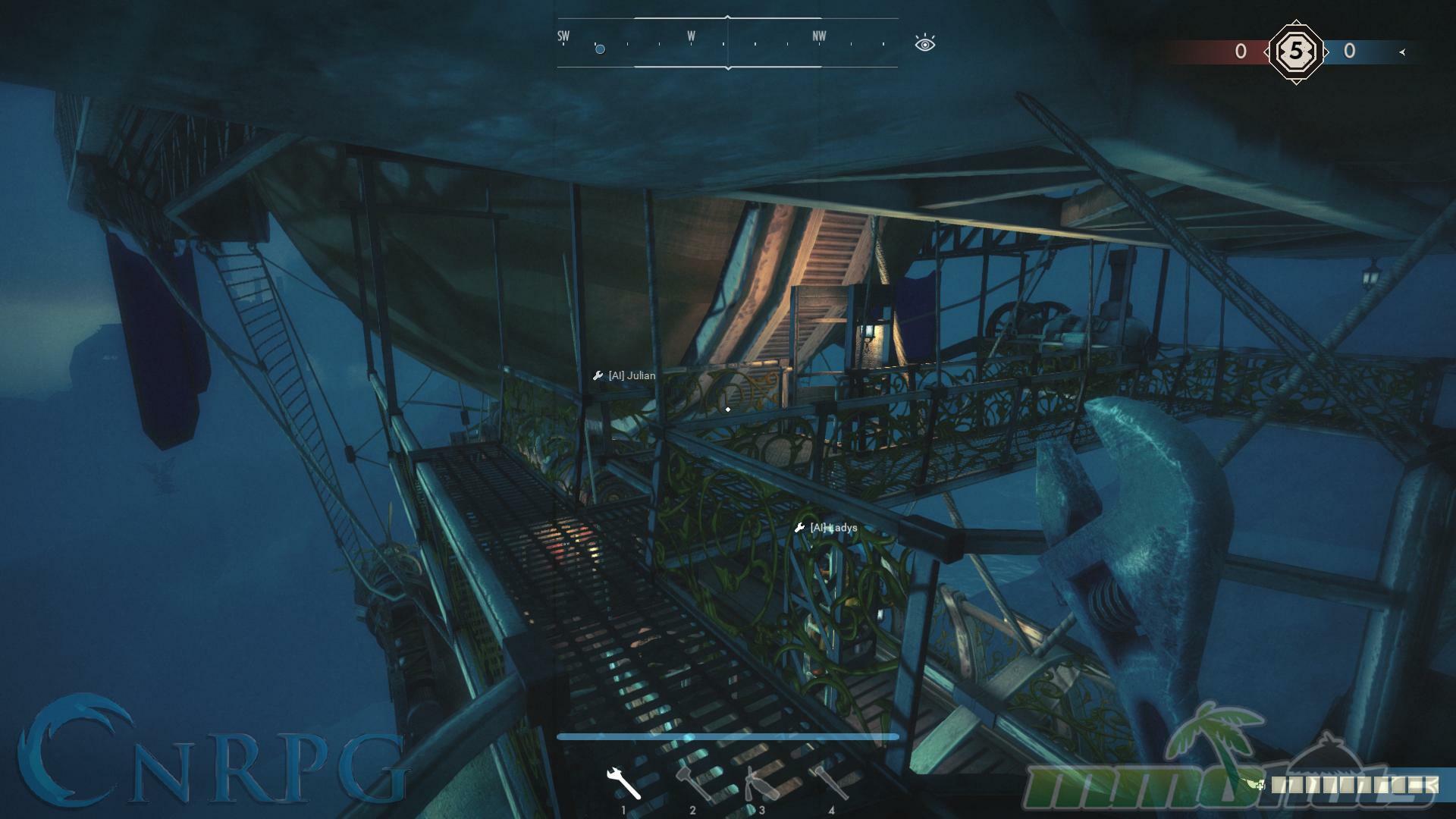 The gameplay is superb.

I’ve always been a fan of games that let players work together on ships, be they in space, in the air, or on the sea. It started way back when I played Star Wars Galaxies and certain ships allowed players to invite their friends. I have fond memories working hard with friends and in-game mentors to achieve the title of Rebel Ace in Star Wars Galaxies so I could unlock the ability to own one of those ships. Perhaps my view of these types of games are skewed by the rosy glasses of nostalgia because of this. Either way, I love the type of gameplay found in Guns of Icarus: Alliance.

There’s a number of game modes to participate in. In PVP, there are ‘point-capture’ type modes and Deathmatch. PVE includes wave-based against-the-world style scenarios, controlled by a dynamic AI that knows when it needs to turn the dial up to eleven when you’re doing good, but can dial it back down so you and your crew aren’t completely overwhelmed. Of course, there are other modes in which you’ll need to find targets to destroy, intercept enemies, and more. Lets just say the game mode situation in Guns of Icarus is a lot more robust now.

Combat in the game is a mixture of skill, tactics, and strategy. You’ll have to work in concert with three other players on your ship to out plan and maneuver the enemy, while also working with other ships on your side. You’ll take on the role of either Captain, who controls the ship and leads the crew; Engineer, who focuses on maintaining the ship by repairing it and putting out fires; or Gunner, who main the weaponry on the ship. There are a wide variety of weapons that have various effects: flamethrowers that will catch the enemy on fire and burn their components, short-range Gatling guns, and turrets that can unleash a barrage of rockets on an enemy. Because of the ship customization, combat can be intense and can vary frequently.

The new Co-Op PVE missions are really something spectacular. I was skeptical going in, as I was so used to thinking of Guns of Icarus as a PVP-centric game. However, I found myself having a blast and I almost always queue for the PVE content rather than PVP nowadays. It’s even more fun when you can get a full crew of friends online at the same time. The Meta Map adds a ton to the game, but the PVE missions with all the various objectives create meaningful content that will keep players coming back again and again. I’m hoping that Muse will continue to flesh out the missions even more, but I’m not sure about their current plans. 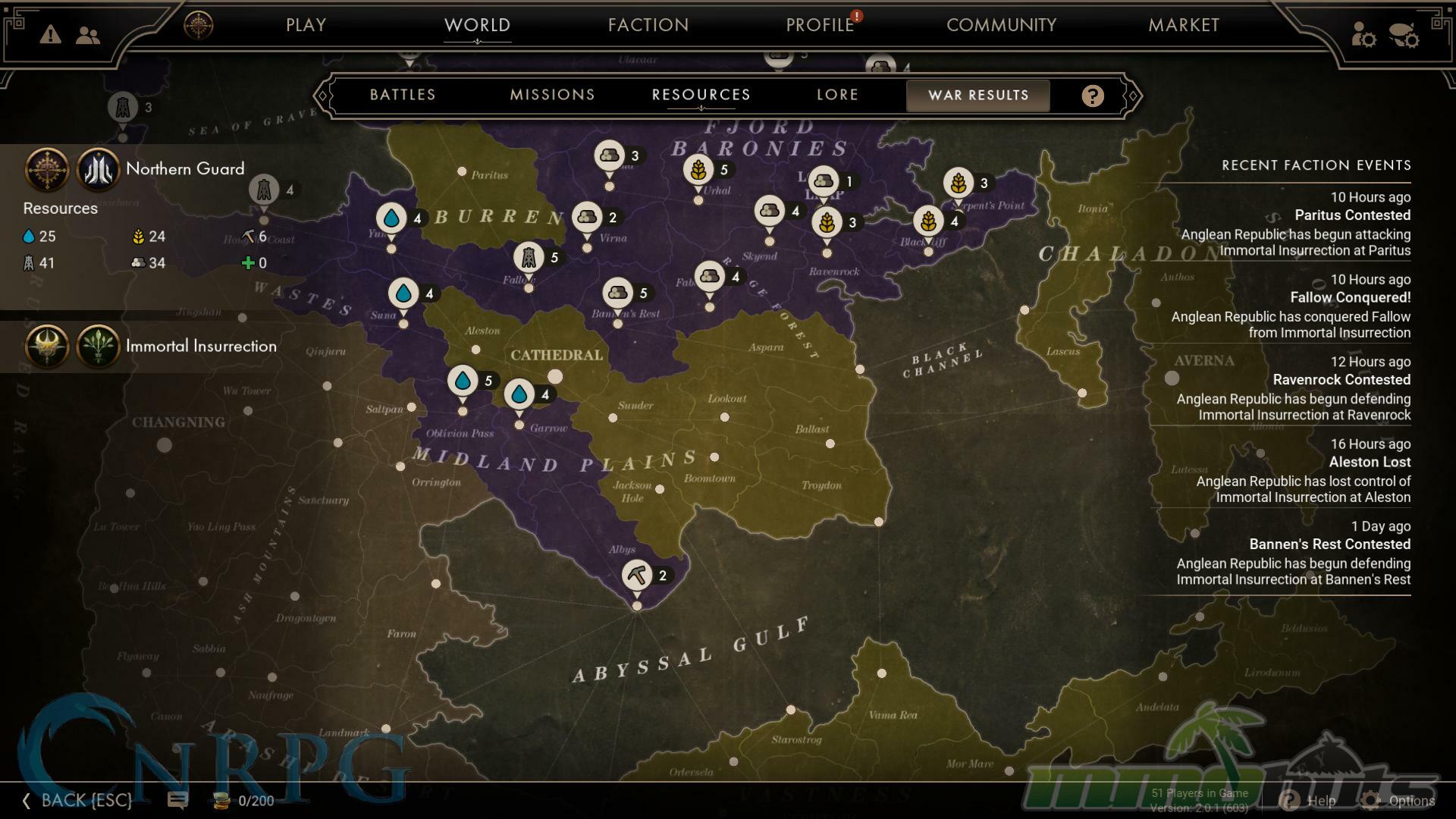 The Meta Map is the best feature.

My favorite thing about Alliance is the Meta Map. I love how it adds a whole new layer to the game. It’s somewhat similar to Mech Warrior Online’s territory control map. There are territories that the factions fight over for control, expanding their territory and gaining access to important resources. With direction provided by players who have contributed the most, the factions play out constant wars of control. I absolutely love how much something relatively simple (at least on paper) completely changes the nature of the game. Even without the addition of PVE, I would have really loved the new Meta Map.

The new factions bring more than a reason to compete, though. By progressing in each faction, you’ll be able to unlock new stuff, including cosmetics, ships, weapons, and titles. This adds content progression in four factions to help encourage you to play. Working with your faction to complete objectives is a fantastic motivator and it helped patch up one of the major issues I had with the first iteration of the game. The lore provided to the world by the factions and the ever-growing story being defined by the players are all just icing the cake.

Guns of Icarus: Alliance is all that I hoped it would be. Back when the Kickstarter for this project began as “Adventure Mode” for the base game in 2013, I had extremely high hopes. Sure, it took a few years to get here, but it was worth the wait and I cannot wait to see what Muse Games does next. Alliance is certainly worth the $20 price tag, as all the content – including the base game, if you don’t own it already – adds up to a worthwhile experience and it’s one of those games you’ll find yourself returning to over and over. Do yourself a favor and hop on an Airship today!

Customization: 4/5 – More than you would expect.