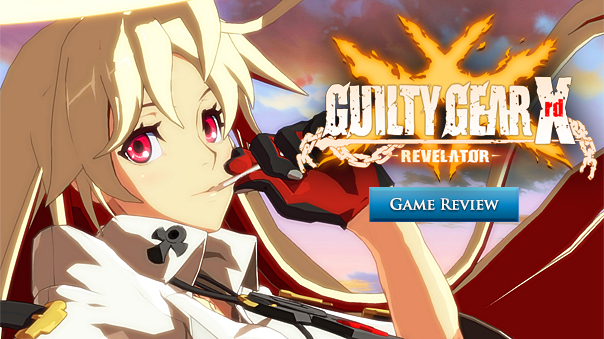 Guilty Gear XRD -REVELATOR- is a mouthful! It’s also not particularly a new title, having been out since 2015 in Japan, and for console in America earlier this year. Now, I’m a huge fighting game fan. I pay attention to the scene, I keep up with game updates, and while I’m not great, I do try hard to be as good as I can be. With that in mind, I’m still a casual. I don’t have the time to get out to tournaments unless I’m already there for work. I don’t spend hours upon hours a day practicing, except during holiday. So I’m not on the “tournament goer” side of the fence. And there’s something I had to ask myself while I was playing and enjoying -REVELATOR-.

Because don’t get me wrong, I love it. But was it worth buying again? Is it really all that different from -SIGN-, the last in the XRD line? Yes, I think it is, but that’s not where I was originally. I asked myself an important question: Couldn’t most of these changes be rolled out through updates to the console? Sure, maybe the lighting changes probably couldn’t, but I imagine you could add modes, characters, balance, et cetera.

But I was talking to a close friend who is deeply entrenched in the tournament scene for anime fighters, and he pointed out that “Guilty Gear is primarily an arcade game.” It’s developed for people in Japan who go to the arcades and play there, so they have to make their money by creating new cabinets and such I imagine. And since the tech is there to update cabinets, but probably not the finances… okay, I understand. I get the point, but at first I was a bit upset by “buying a new game for updates,” but I did it for Street Fighter for years, so I guess I can’t complain.

They want people to keep going to arcades to play, and I imagine that’s where the brunt of their money comes from for Guilty Gear. And it’s more than “just a few updates,” to be fair. They completely redid the lighting/shading engine, and it looks even prettier than -SIGN-, which is saying quite a lot. I think the biggest change for me is the damn netcode. -SIGN-’s PC netcode was absolute garbage, and I had such a hard time getting matches after I finished my review. But the netcode we’re using now is the same as the PS4 one, if I haven’t missed my guess, and it’s much better. Load times are much better overall now as well, which makes me happy.

Guilty Gear XRD is not a Street Fighter style game; it’s an anime fighter. Those are so very different from the SF/Tekken/MK style of games, and I’ve covered this before. Maybe I’ll write an editorial about just how different they are… But nonetheless, the differences are there, and the vast majority of people picking this up are going to be people who are familiar with just how different Guilty Gear is from say, Mortal Kombat XL, or Street Fighter V. It’s faster paced, it’s action-packed, but it’s not harder than Street Fighter.

If you put both in front of a casual gamer, they will hands down pick up Guilty Gear XRD easier. But if you’ve put in the hours to train your muscle memory on Street Fighter, you might not feel the same. Your fundamental knowledge will still be useful, but how you approach the game is going to be much different. There’s so much happening on the screen at all times, to the point you might be asking yourself, “How the hell am I going to learn all of this!? There’s so much here! And none of it is in Street Fighter!” One thing ArcSys is better at than anyone else: Tutorials. -SIGN- had the best tutorial I had ever seen in a fighting game. Until -REVELATOR- that is. It’s longer, and you might think it’s tedious, but DO NOT SKIP IT.

It will teach you everything you need to know to get into the game: From movement, to the buttons, everything is valuable. It’s up to you to put it all together, but they’re going to give you the pieces. It will offer to teach you combos and special moves for all the characters, and in general, give you the ability to become good, if you invest the time. It’s not easy, but it is fun, and at the end of the day, that’s what the casual consumer wants: Fun. And the ability to learn the basics, and even the more intricate details of any member of the cast you want? That’s fun when you go online and don’t find yourself stuck in an infinite corner combo!

And there are quite a few new things from -SIGN- to -REVELATOR-, but one of the big negatives, at least for me, is the lack of an English Dub. Maybe that’s a silly thing to say, especially for an Anime fan, but the Japanese audio feels a bit awkward and hard to listen to. And if I’m playing a fighting game, I don’t have time to read subtitles! And you don’t have subtitles midmatch, and I’d kind of like to know what they’re saying. You can see subtitles during the big execution moves at least. . . It’s not a huge drawback, but I do miss the English Dub of -SIGN-.

But going back to the fun factor, one of the huge changes from the last iteration of the game to -REVELATOR- is balance. From the research I’ve done, and the people I’ve talked to in the fighting game scene, nobody is really busted or “S” tier in this game. The balance changes were mostly light/easy ones, but it made the game so everyone is basically “B” tier. Viable, solid, and not likely to be banned at tournaments. Hell, Leo Whitefang won Arc Revolution 2016 this year, and he’s “B” Tier. In the top five were Bedman, I-No, Leo, Johnny, and Sol. That’s variety! You don’t see that in Street Fighter. But what’s a tier system you might ask? A tier system is where characters are ranked from S-Tier [Godlike] to D-Tier [Not worth it]. But everyone being balanced around the B Tier is something that I haven’t seen in a game in quite a while. Even Blazblue has their godlike characters that only really need one button to win. I love the notion that any character is viable because I usually play weird ones.

That’s the major change to the game other than a graphical update. There are new modes, new stuff to play around with though. The Online Lobby got an overhaul and it’s just fantastic, less confusing than in -SIGN-. And the netcode, again, I cannot preach hard enough about how wonderful it is. But there’s stuff for the single-player as well! The new figure mode isn’t necessary, but it’s cute and fun. You can acquire figures of the characters in the game, and you can pose them, unlock new facial expressions/poses, colors for them and basically, through the mini-games/missions, you can amass an army similar to Amiibos for Nintendo. Just virtual, and free. It might seem like a rather silly thing to mention, but honestly, it’s a lot of fun. It’s something to take your mind off the seriousness of the game and do something just a touch different.

You start off with just one character that you select [I selected I-No because I-No is life], and as your time with the game progresses, you’ll garner more and more of the things and it will no doubt become addictive, as it has for me. You can spend in-game currency you gain from missions/fighting on fishing. You sit in this brightly lit area, and fish! You fish up more unlockables, and that’s kind of nifty to me. I spent a lot more time doing this than I’m willing to admit… The other major change for me, is the story. The story expands on -SIGN-’s and brings closure to certain plot points that I’m not going to spoil. But the story is a bit easier to understand than Blazblue’s, at least to me. Maybe I’m simply going mad, and it all makes sense now. But if you’re a fan, and want to know what happens next, you owe it to yourself.

At the end of the day, Guilty Gear XRD -REVELATOR- is fun. Sure, it doesn’t appear to add a ton to the last game on the surface, but there’s plenty to unpack for the casual gamer and the hardcore fighter alike. And the tutorial is easily the best tutorial for any fighter to ever exist. Yeah, I’m saying it, and I mean it. You aren’t going to find stuff like in SF3: Third Strike that will break the game for you. What I mean is, if you couldn’t parry in SF3, you basically can’t play the game on any competitive level, as far as I’m aware of. It’s integral to getting good at the game. Yes, Guilty Gear has mechanics to learn, but nothing quite like that. And if you want to remain casual, it has two styles of play, like the last one. You can be “Technical,” which is to say, play the game the way it’s meant to be, and “Stylish,” which will help you string together combos in a much easier fashion. You can also use this to learn what basic combos will look like when you can do them… But I’d rather just practice. It’s gorgeous, it’s fun, I love air dashing, and while it may be built with the Arcade in mind, I’m glad it finally came to PC.