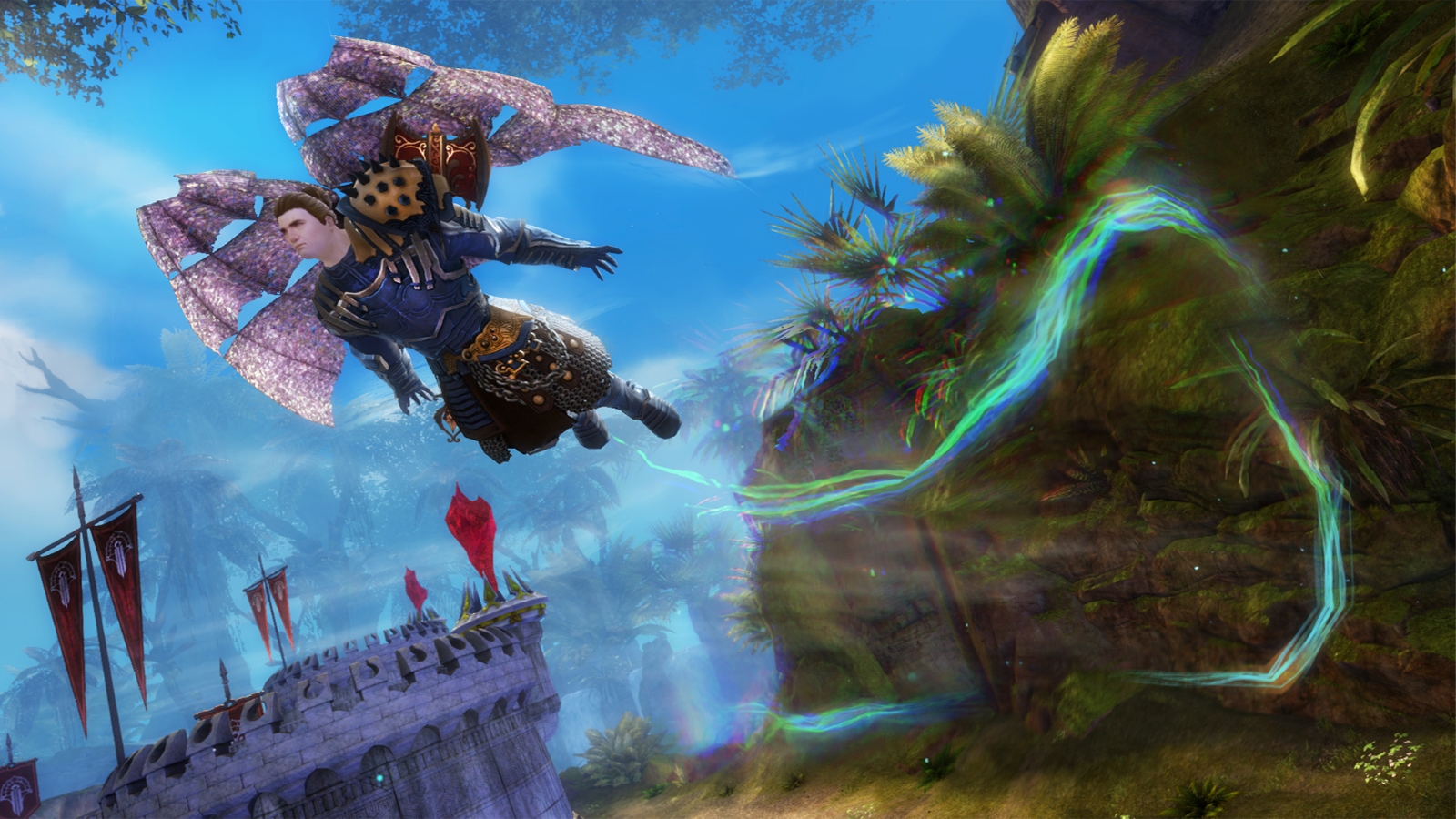 Recently I had the pleasure of sitting down to play Guild Wars 2 with the game’s team lead, Jason Reynolds.  He and his friends lead us through a preview of an upcoming raid, which is only one small part of a series of new content patches making their way into the game.  The raid he showed us was brutally difficult and a lot of fun – it required the team to split in two, something that’s always rewarding to pull off successfully.  One team was required to go around back and shut off defenses, while the other had to charge straight up the middle through the gates.

The fortress was owned by a group called the White Mantle, which is a villainous sect venerable players might recognize from the original Guild Wars.  Like all villain cults, the White Mantle deal in old gods, apocalypse, and general nastiness.  The powers that be in Guild Wars 2 aren’t even asking any questions now that they know the White Mantle are around – they are just getting adventurers together and kicking in the door.  And kicking in the door with more than a dozen other players is always fun, especially in Guild Wars 2, a game designed around group content.

I chose to be a Mesmer, a class I enjoyed in my previous time playing of the game.  My allies were mostly elementalists, and I think I saw one warrior.  I immediately regretted my decision – why didn’t I choose my main class, the ranger?  Damn.  Well, it was too late for that.  I had to make it happen.  We wiped a few times, but the devs were patient with us and held our hands through the encounters, which were your standard ‘avoid big glowy sections, attack enemies, kill the adds, etc.’  There’s only so much you can do to dress up a raid – we’ve all pretty much been there at this point.  You either like them or you don’t, and I have to say that, unfortunately, I don’t care for them.  But that’s not to say I didn’t have a good time.  I enjoyed listening to the devs talk about the game itself, the writing, and some of the little touches they’ve added to this content to bring it to life. 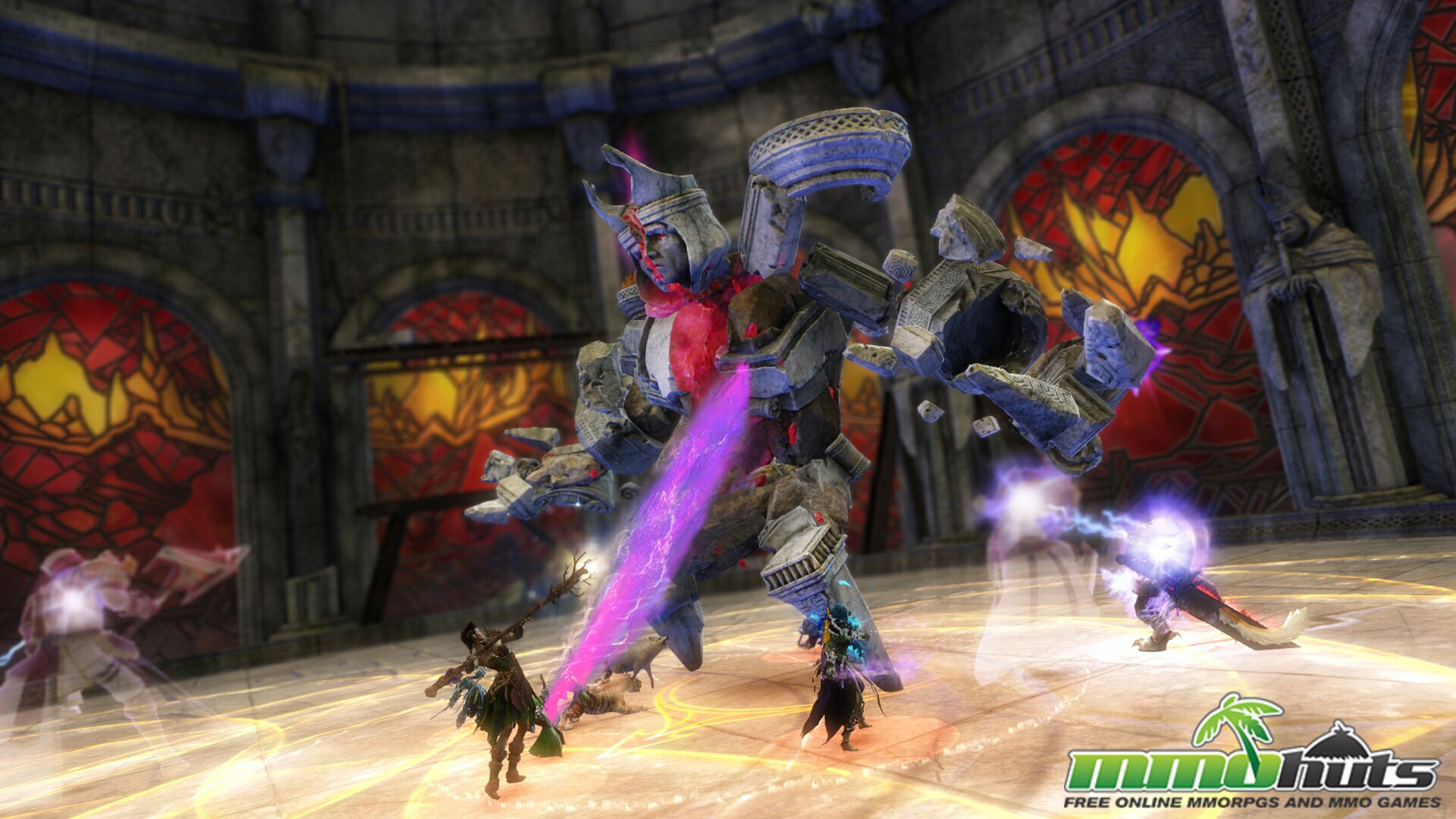 The environments were gorgeous, and it was nice to see the minimalist color scheme of the GW2 box art and menus come alive in the White Mantle’s stark red-on-white uniforms, castles, and courtyards.  It gave the entire area a very surreal quality, like we were breaking into some sinister version of Disneyland taken over by bright and cheerful, Stepford Wives-esque cult killers.  It was a welcome reprieve from the usual ‘black and purple tentacles, old golds, blah blah blah’ garbage.  Why can’t we evil have smiley face stickers and fresh, attractive colors?  Just look at the Nazis, those monsters knew the power of fashion.

Anyways, we killed the boss, we killed the mini boss, we got to the end, you know the drill.  What I did notice was that in these raids, players and their avatars interact with one-another.  For example, certain events involving a powerful enemy mesmer might cause one player’s character (a Guardian) to say “That’s one powerful Mesmer.”  To which the resident Mesmer, another player, might reply, “She’s not that great.”

Banter!  I love banter.  MMORPGs never have banter, especially between PCs during PVE content.  This is a nice touch, the kind of thing that makes the tedium of raiding a lot less insufferable.

Anyways, it all looks fresh, shiny, and tight, which is what we’ve come to expect from ArenaNet and the Guild Wars 2 team.  If you’re a fan of the game, you’ll be happy for the coming raids.  If you haven’t played the game, go check it out.  If you’re not a fan of the game, but you love raids, maybe give it another shot – it could change your mind.  Do what you want, I can’t control your brain.  At least not yet.  Give it ten years.