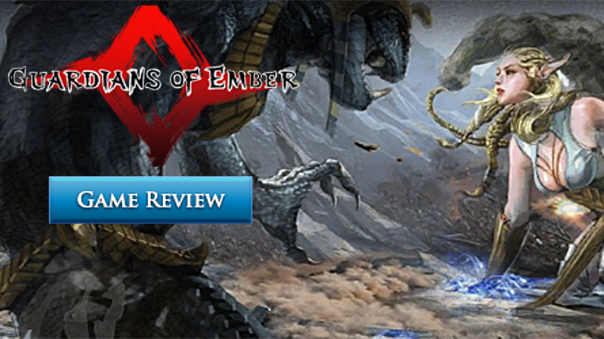 For a while I have been keeping an eye on Guardians of Ember, and for a long time I didn’t really hear anything good about it. I some saw of the potential, but most didn’t see anything interesting. But in the last month of December early access went live, and I decided it was time to get a quick look at the game, and see its potential. The genre has been growing steadily over the last couple of months; I myself have grown into the genre as well. I used to have a love and hate relationship with hack and slash games, but once you figure out that you shouldn’t treat them as an actual RPG, then you can truly find the charm in its style. 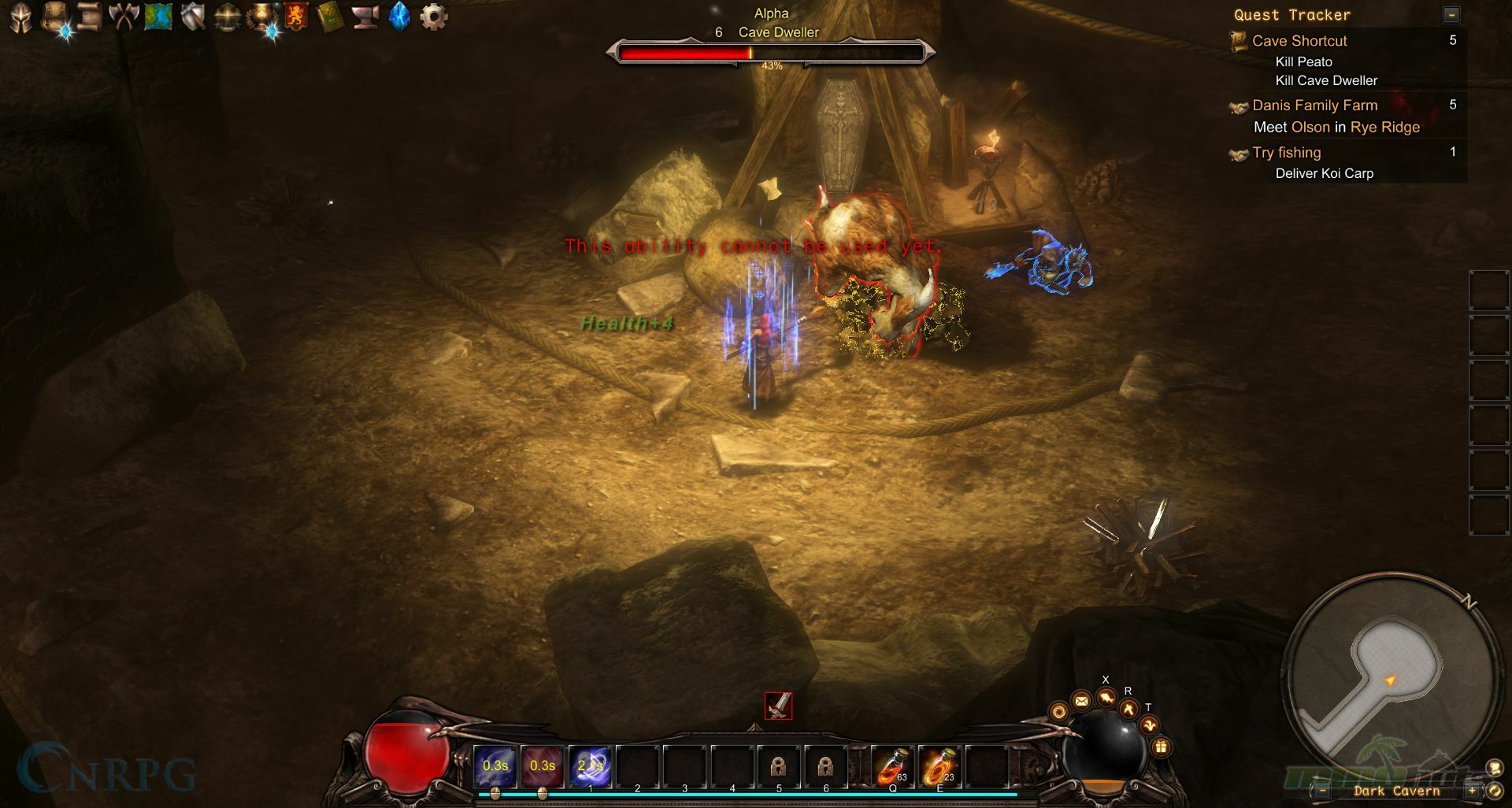 I just want to talk about the elephant in the room, which I personally think is pretty obvious to spot. Guardians of Ember in its current state doesn’t feel like it’s an action RPG. Sure it’s kinda hack and slashy, but up to a point. In most action RPG games, there are hundreds of monsters running around in big packs, just waiting for a huge attack to be killed. This makes your journey a lot less tedious and makes it feel more ‘action’ packed than a normal MMO. Hence why it’s called action RPG. But in Guardians of Ember none of this is true. There are packs of monsters, but not that many, and scattered around bigger maps until you go into dungeons. And even the Dungeons do not feel as crowded as any typical action RPG. It actually felt more like a normal MMORPG, and once I treated this game as one, it actually got a lot better. 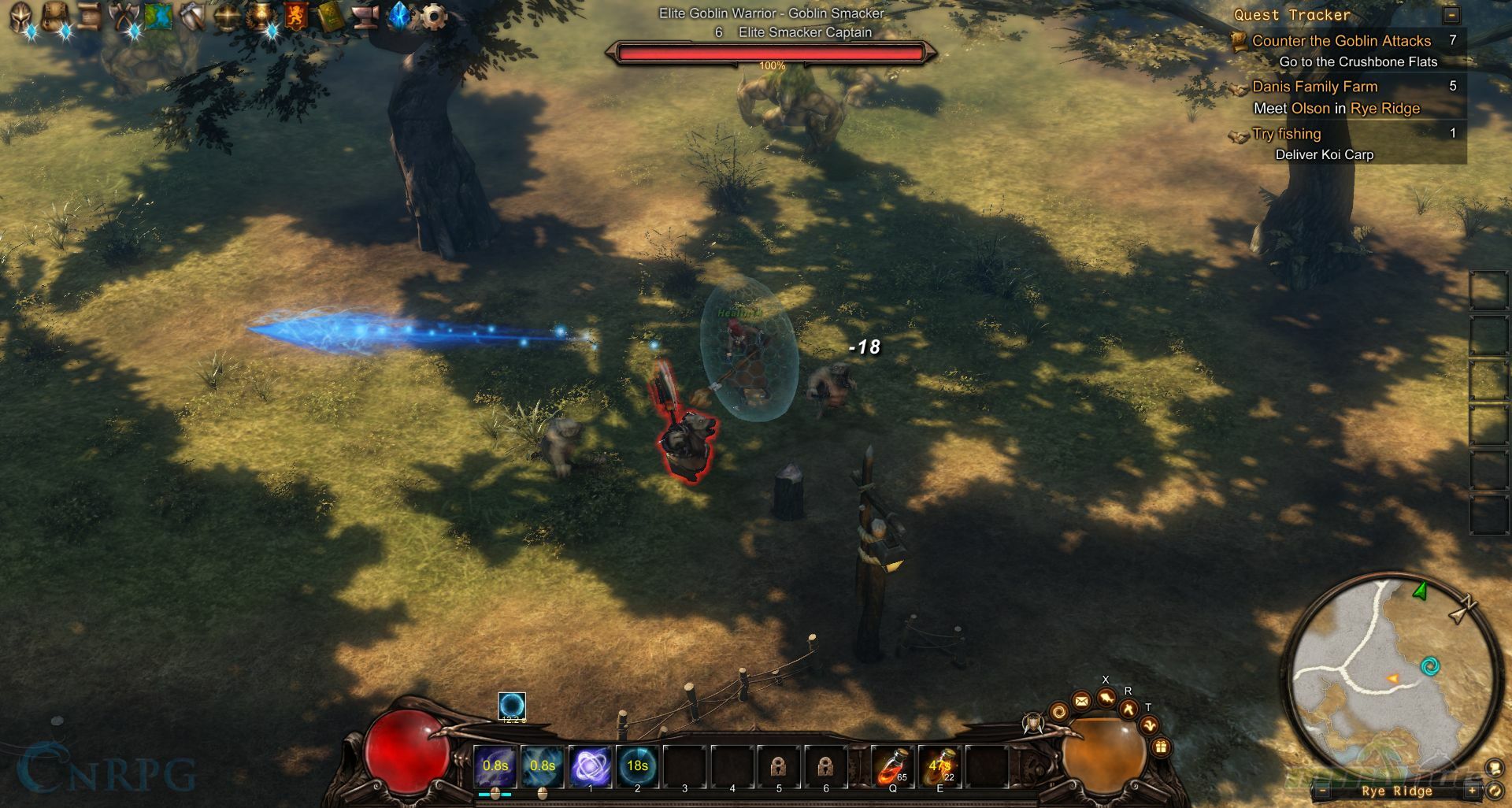 So let’s break down why exactly Guardians of Ember more feels like a normal RPG. Well besides the maps and the monsters themselves, a huge part of action RPGs are your build. Every class should be unique from the other, with flashy spells and skills slowly unlocked as you get stronger and your abilities get bigger/flashier. But in Guardians of Ember the skills are done in a strange kind of way. Every time you level up you get skill points. These skill points can be put into skills to level them up to the next ‘tier.’ Now this in itself isn’t really a bad design. But each of these tiers is in the same skill tree despite having different types of elemental damages. And this is where it gets a little confusing… 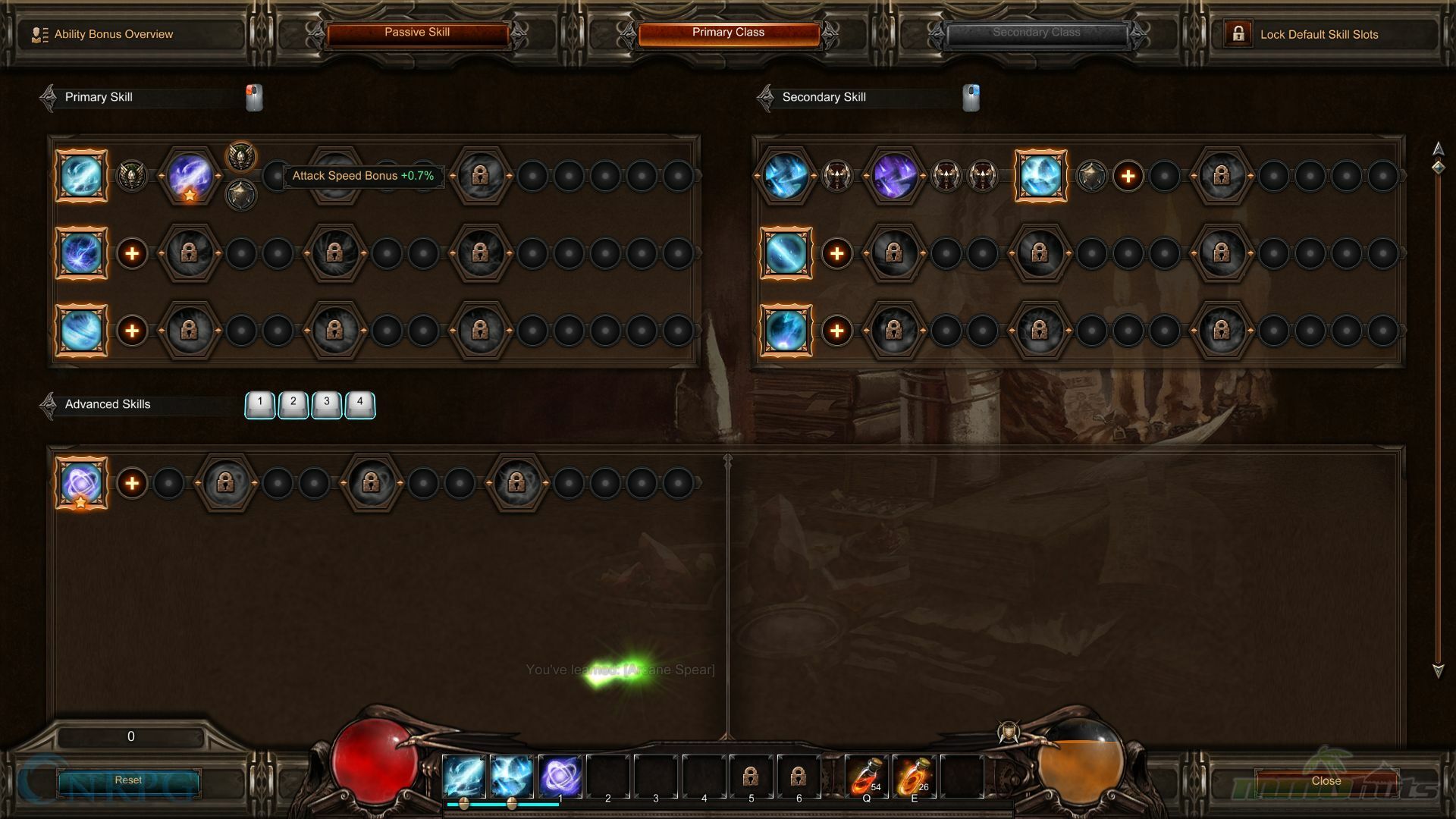 Not only do you get skill points when you level up but you also get attribute points that you can put into four different attributes. Two of these attributes are dedicated for different elemental attacks: one is for your critical strikes and the other for attack speed. But each one of the tiers in your separate skill trees uses a different elemental attack. And when I went to upgrade my spells, I noticed that my class, the Arcanist, uses two elemental attacks. So for example, the first skill in its own skill tree uses Frost, while the second spell, the upgraded version of your first initial spell, suddenly switches to Energy damage, and then at the third stage of the tree it switches back again to Frost damage. Now I’m not sure what the idea behind this design is, but you have to plan your character out straight from the get go. If you do not have enough points for your final chosen spell, it’s better not to put any points in them? Since you attributes give your elemental damage quite a few bonuses you do not want to miss out on. 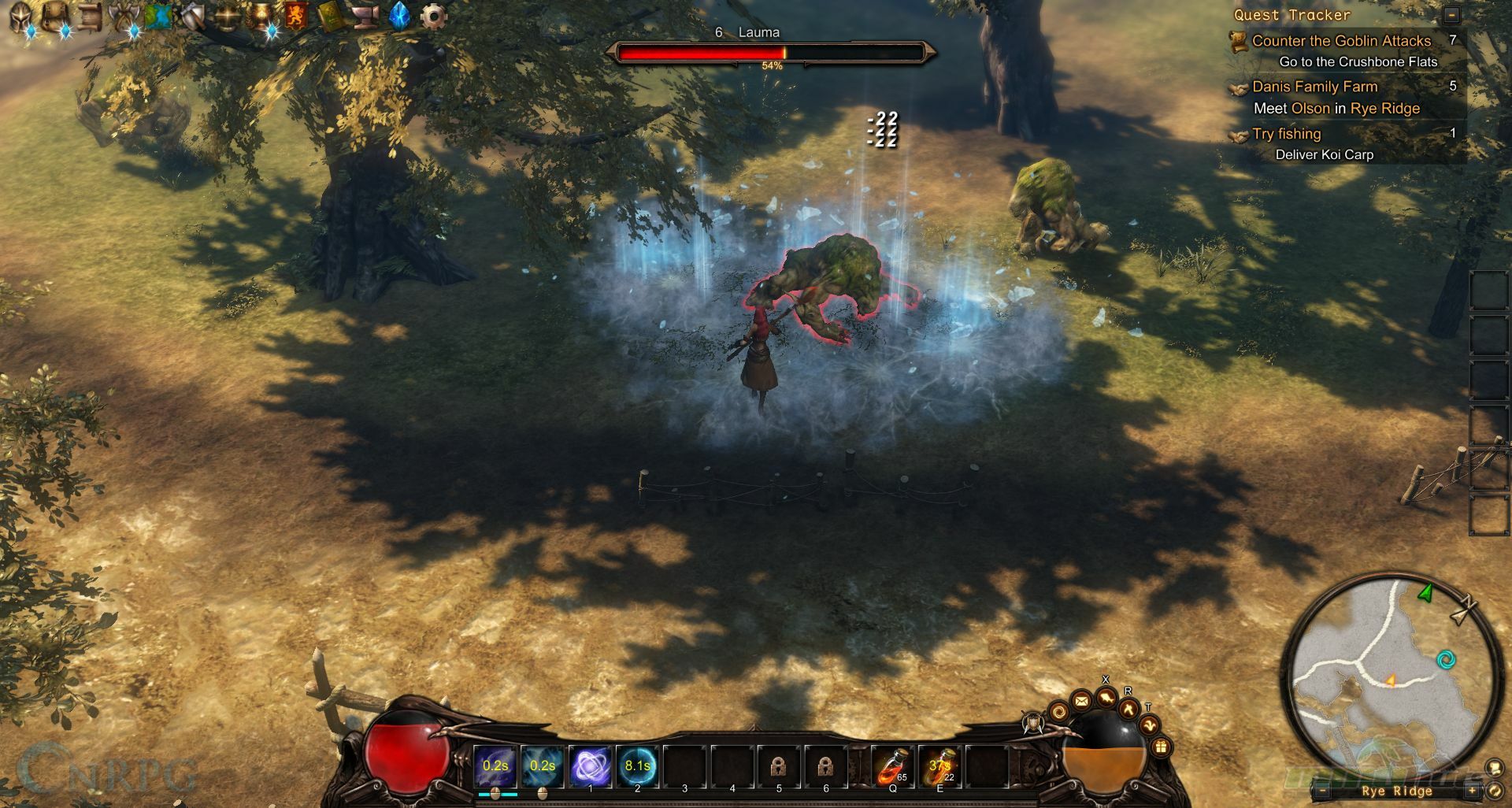 Besides this you can unlock separate passive skills for both Energy Damage and Frost damage, but the whole point of action RPGs is usually that you focus on one particular attack or spell damage, and go from there. But this isn’t the only confusing thing I have noticed in Guardians of Ember. It gets stranger for some reason… Gear is usually also a big deal when it comes to games like this. Do you take the sword for its special bonuses, or do you go for the axe? Well in Guardians of Ember it doesn’t really matter what type of weapon you have hanging on your back. Are you a ranger and specifically made to use ranged weapons? Well you can still equip the axe to get the bonuses, and your character will still use a ranged weapon when it attacks. And it also works the other way around – so if you are melee focused you can equip ranged weapons and still get an imaginary sword to attack with. And thus you do not really have to play around with your gear to get the best possible setup for your build. You just go with whatever has the best stats. 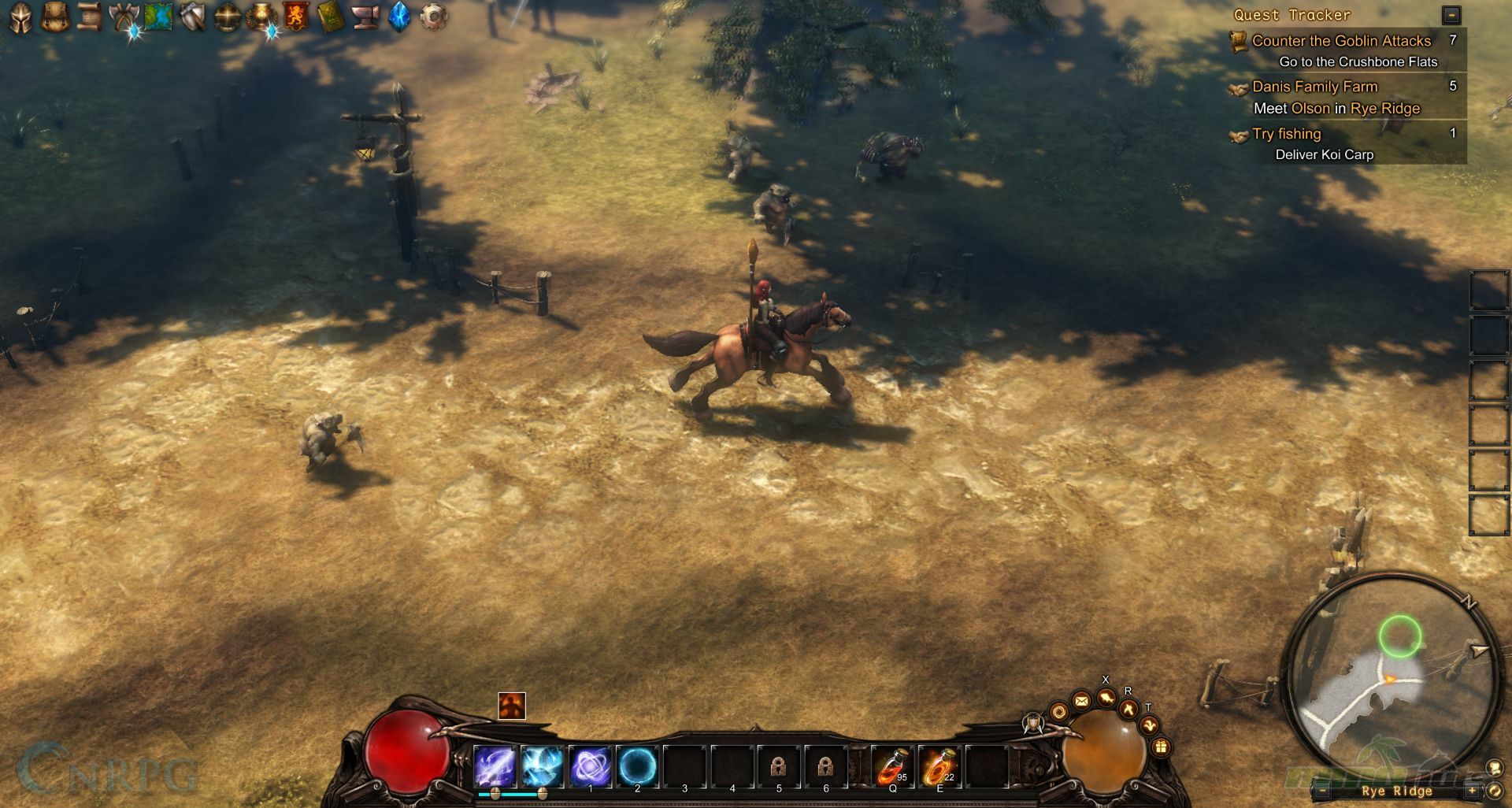 I do not want to sound all that negative as some players may like it and some may hate it. But to me the choices are very simple, you obviously go for the strongest attacks, the ones with the biggest cones so that you would have to use as little spells as possible. Thus most players will have a few obvious choices with some of the classes, and this isn’t what makes a character unique, something that is incredibly important in an action RPG. But something that got me interested in the game from the moment I heard of it was the special graphical style of the game. It reminds me a bit of the older style of RPGs. Not to say the graphics look dated but rather the style is old and put into a new jacket that really appeals to me. 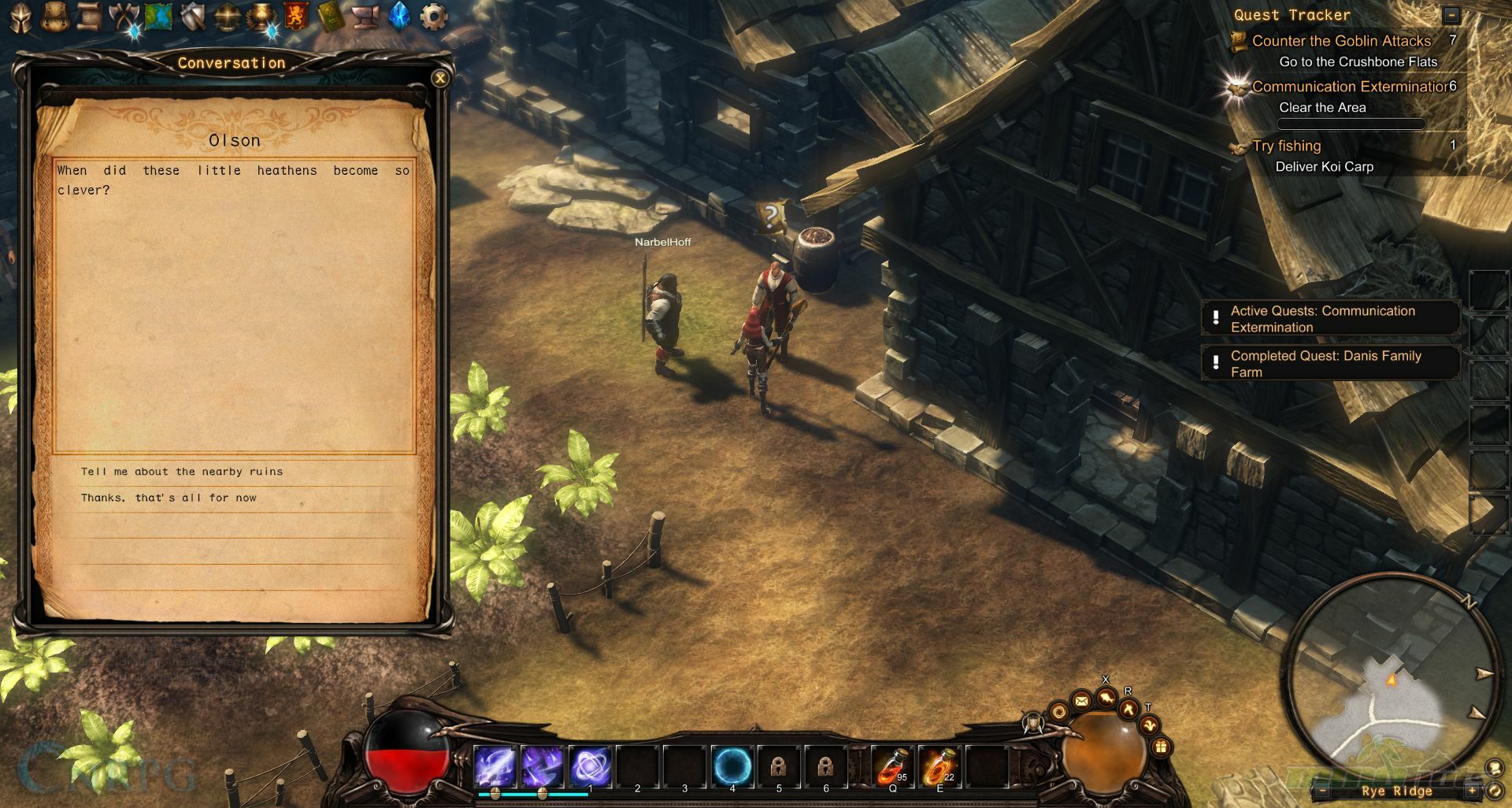 Guardians of Ember isn’t really an action RPG. I have said it earlier and I will say it again, it simply is not. The world is shared with others, so you can run up to anyone in your adventure. The only soloable areas are the dungeons, the ones that seem like it should be the playing ground of an action RPG. And if you are done grinding monsters, you can also do some PvP. Unfortunately from what I have seen so far there is only a 3v3 mode, but I do hope that they will add a 1v1 mode since that appeals to me more. Now let’s talk about some smaller details of the game that make me question its action RPG existence, like mounts. And these can be bought with real money, or can be earned from achievements. Yes you can actually get items from doing achievements! I personally HATE doing achievements so that is another design flaw in my eyes. Besides the achievements you also have a compendium book. In here you will find monsters that you will have to kill, and these grant you stat bonuses, so it’s basically an extra grind to become stronger for no particular reason. A strange design in an action RPG, one I honestly do not wish to see. And then there is also crafting and enhancements, your standard RPG elements that you can find in almost any RPG ever made. 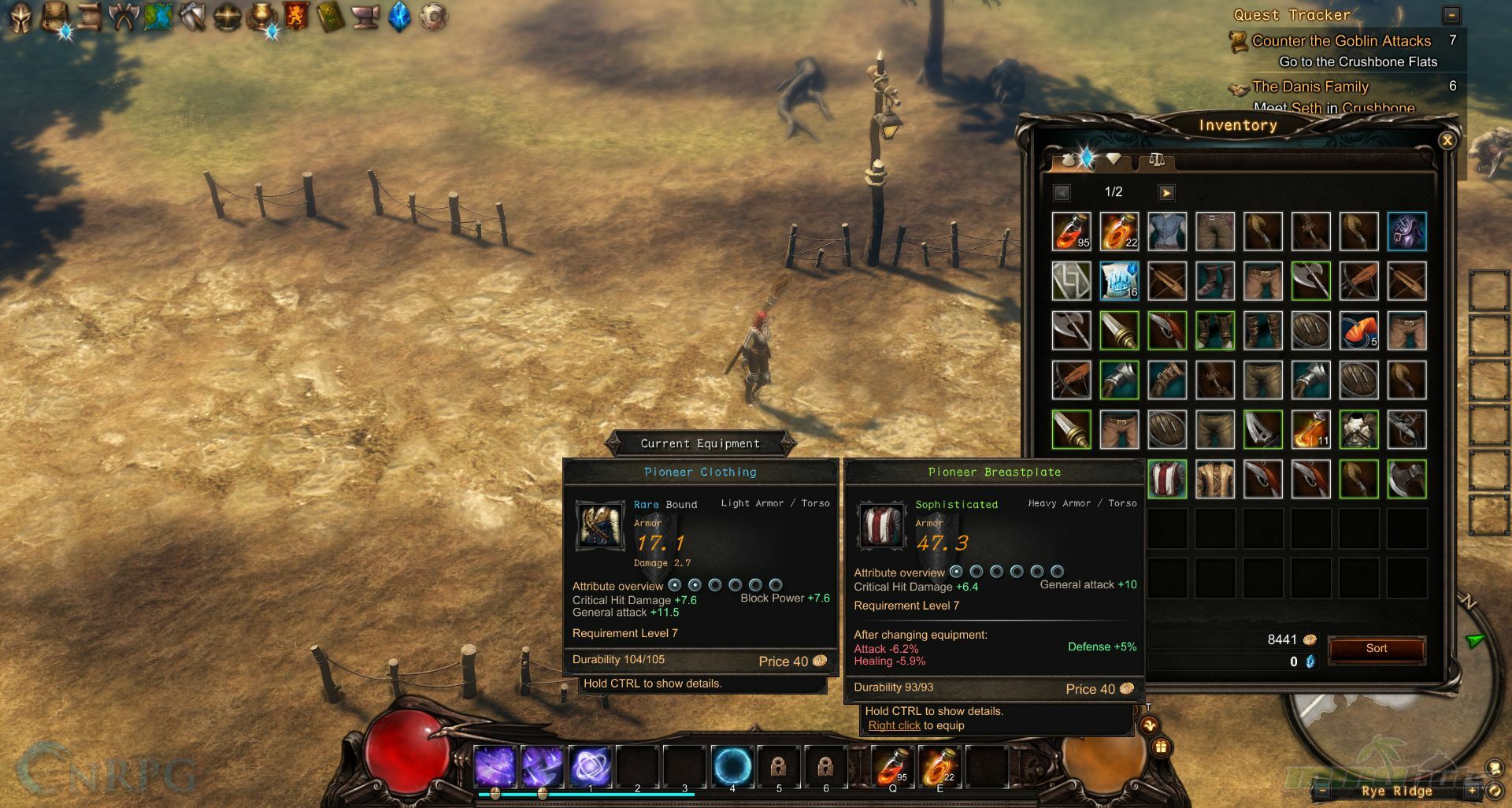 Well it’s difficult to remain positive after reading all this, I know. I tried my best not to make it sound that bad, but Guardians of Ember struggles with many design flaws, ones that make you question the actual genre of the game. What currently exists isn’t downright bad, but it’s not for me. The appeal might work with casual fans or for the general RPG fan, but if you play this game just to get another action RPG experience, you will definitely find it lackluster. The game has this special style going on. Some of that style is bad, but some of it is definitely good, and I think that if the development team works on this, it can definitely turn around into a fun game. Fact is they need to make up their minsds and focus on what’s working. For now, do not buy into the game, just let it rest there in your wishlist on Steam. Keep looking back at it every now and then; the developers are almost bringing out daily updates, and are actively working on making the game better. I have hope for it, but right now it’s still a bit of a hit or miss.