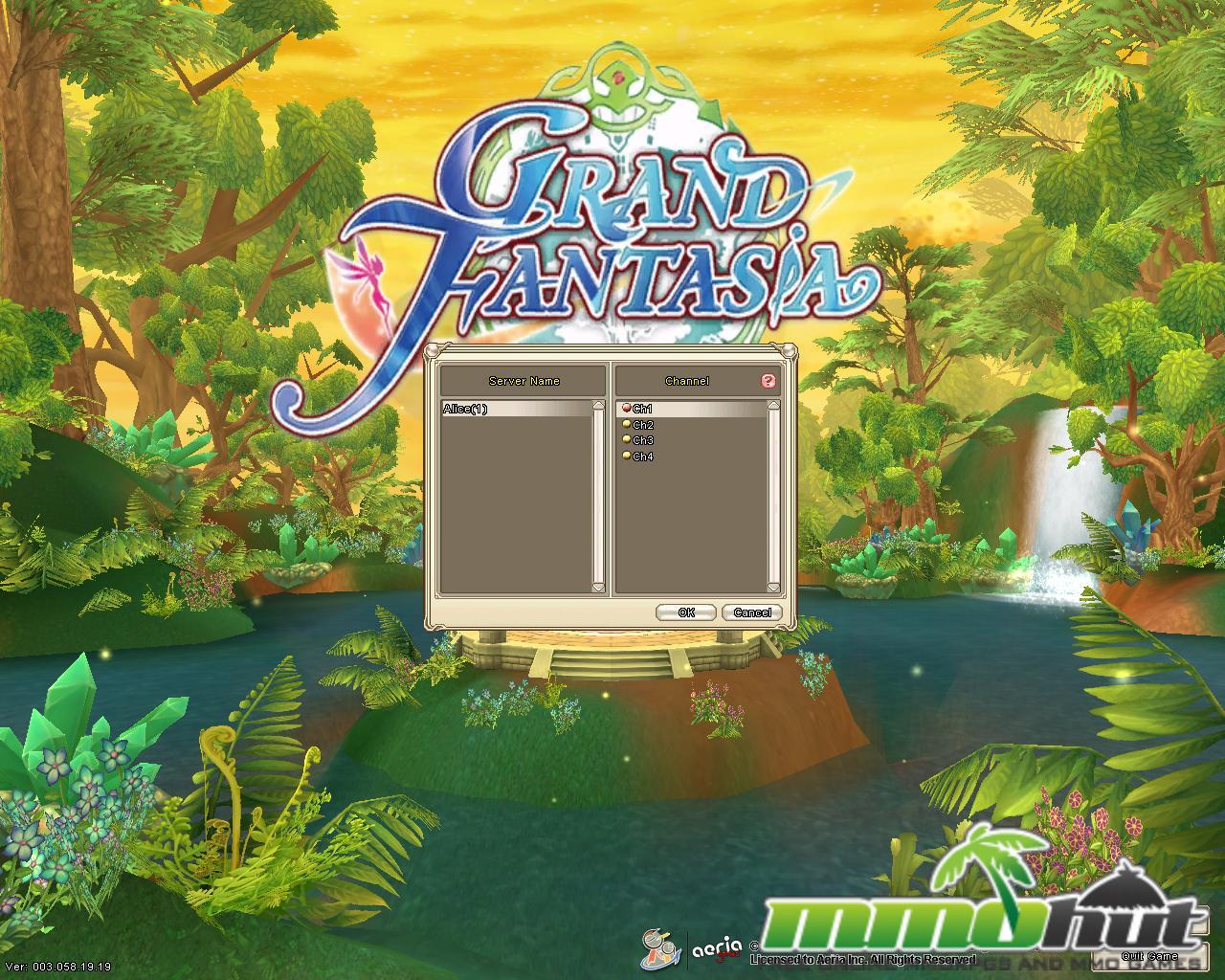 Grand Fantasia is a neat 3D anime inspired fantasy MMORPG by Aeria Games. The game is set in the mystical ‘upbeat’ cute fantasy world called Saphael where players, called ‘Sprite Messengers’, have to train hard in order to defeat evil demons during the ‘Day of Destiny’. Basically, every millennium or two, Demons and Sprites battle it out. If the demons win, the world ends. It’s your job to prepare for the ‘Day of Destiny’ by committing mass genocide against the cute creatures of Saphael in order to level up enough to fend off the evil demons. The whole ‘preparing for a massive battle’ thing definitely isn’t original. In fact, it very closely resembles ‘Ragnarok’ from Norse Mythology. Sure – the story isn’t anything fantastic, but I applaud the developers for at least trying to create some sort of atmosphere around the game. Anyway, let’s dive right into Grand Fantasia, shall we?

When I first logged into Grand Fantasia I didn’t know what to expect as the game looked a lot like Fiesta Online, which had few customization options. I was pleasantly surprised upon hitting the character creation screen though – players can choose from one of seven different eyes, 10+ hairstyles, 8+ hair colors and 6+ skin tones. Unlike most games, players do not select their ‘class’ while making their character. All players start off as a ‘novice’ and can advance to their first ‘job’ at level 5. On top of the regular character customization options, players can customize their ‘sprites’, which are basically cute little pets which play an important role in the game (explained below). These cute sprites can also be customized to a certain degree. Select from one of 12 classes for your sprite [determines sprite’s starting skills] and start your adventure in the world of Saphael. 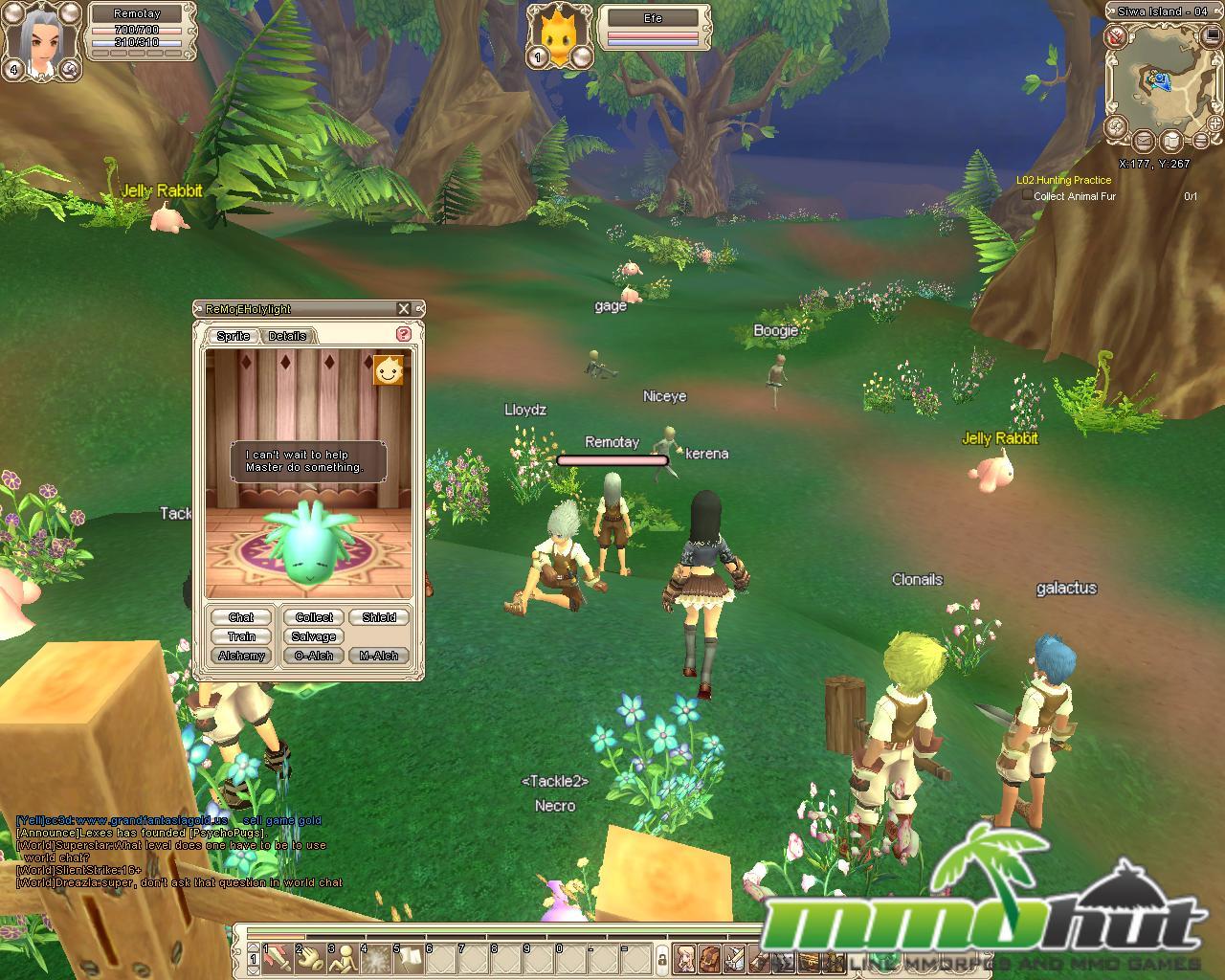 No, not the soda. Sprites play an important role in Grand Fantasia – they help your character by crafting items, gathering resources and even picking up loot for you. Sprites gain experience and improve their skills by completing various tasks assigned by the player. Train a Sprite enough early on and he’ll be incredibly useful later on in crafting all sorts of items. As a Sprite is ordered to ‘forage’ – he’ll gain skill in foraging and as he’s ordered to ‘mine’ he’ll gain skill in mining. Sprites are really an additional layer of gameplay in Grand Fantasia – as players can even decorate their Sprite’s storage rooms.

From Newbie Island to Red Ridge

All players start off their adventure in Grand Fantasia on Siwa Island – the beginner area where players can quickly learn the ropes. The graphics in the game look very similar to the upbeat cartoony graphics of Luna Online and even Cloud Nine. Upon reaching level 6 players should be able to leave this zone by completing a short series of quests. Personally, I remained on Siwa Island up until level 10, but that was only because I didn’t know I could leave earlier. Upon reaching level 5 – make sure to complete your ‘job advancement’ quest as you won’t be able to gain any more experience until that’s finished. Siwa Island has plenty of quests – so leveling up early on won’t ever feel too ‘grindy’. The overall combat feels a bit too easy though – but it does get more challenging later. I guess I shouldn’t be complaining that the tutorial area which was designed to ease players into the game is too easy. 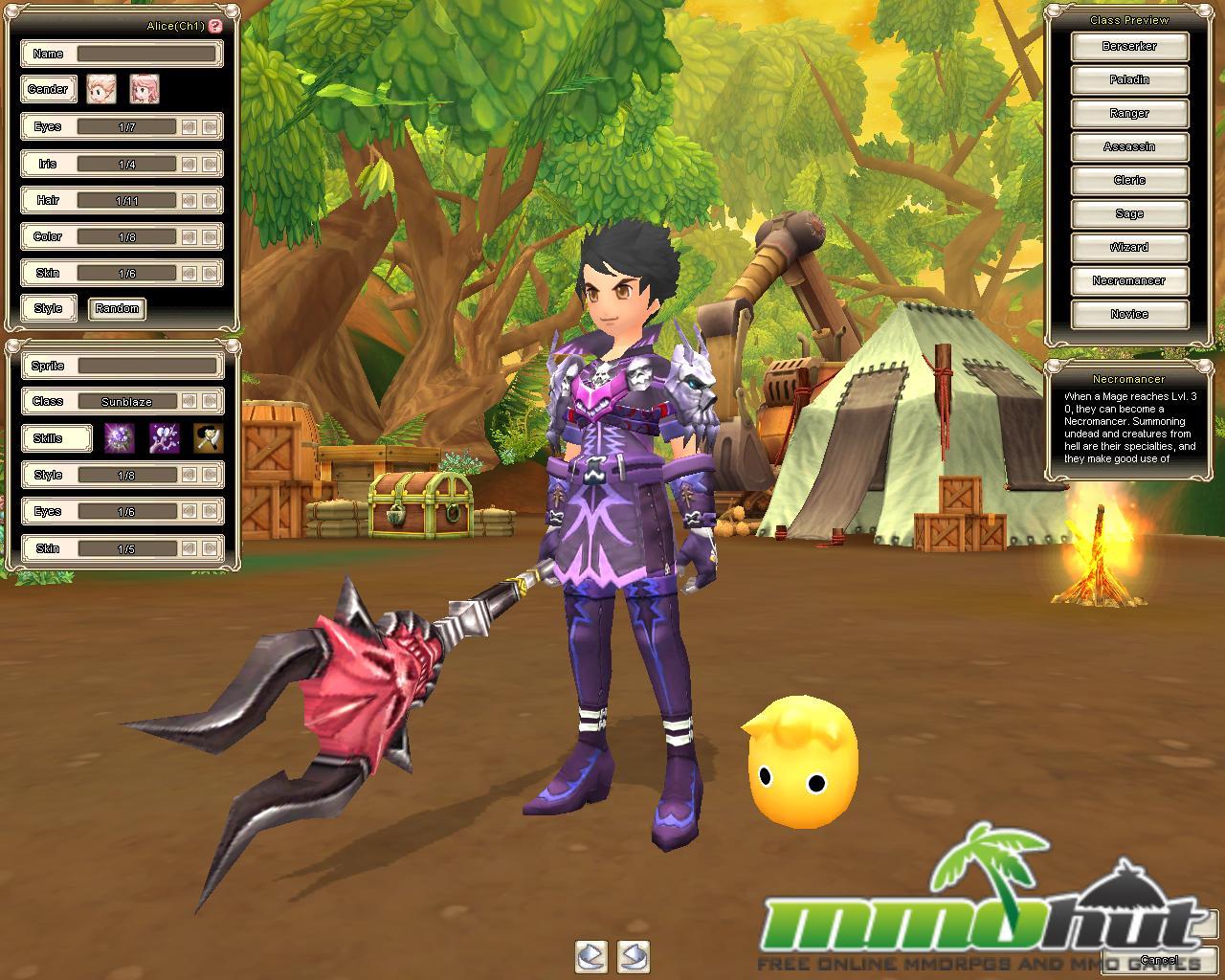 Upon reaching level 6 players will be able to leave Siwa Island by speaking with the ferryman near the docks. Players can choose from three different destinations: the Central City of Kaslow, Magic City of llya and the Machine City of Jale. Don’t think too much about which area you wish to start off at, as each area is pretty much equal in terms of quests available and variety of enemies. After completing all the quests nearby I ventured off into an area called Red Ridge [There’s a town in World of Warcraft also called Red Ridge! OMG!] where there are many… many more quests. One thing worth mentioning right away is that there are a LOT of quests in Grand Fantasia. I never had to go out and just ‘grind’ to gain experience because I always had at least one quest I needed to work on. The fact that there are so many quests also gives the game a lot of direction; something a lot of MMORPGs lack.

Grand Fantasia looks and feels like many other generic fantasy MMORPGs, though the game does offer more content than most. It also has a few unique aspects worth mentioning. Unlike most games there are no finite amount of ‘skill points’ in Grand Fantasia. Instead, every class has access to every one of their skills so long as they meet the pre-requisites for that skill. Plays can learn their skills by simply purchasing them from a skill trainer in town. Personally, I’m not a huge fan of this system, as it sort of makes every mage practically the same as every other mage and every warrior the same as every other warrior, since they have the same set of skills. I find it silly that every warrior has access to every caster skill. To be fair, though, each class branches off into two more job advancements at level 30 – so there’s at least SOME skill variety.

The ‘talent’ system in Grand Fantasia is quite interesting and allows players to make their characters more unique. Players can learn ‘talents’ by combining items and these talents yield special bonuses when equipped. Players have a finite number of ‘talent’ spots – so mixing and matching talents is the best way to really ‘control’ the way your character grows in the game. Using the right combination of talents is important for both PvE and PvP. The PvP system in Grand Fantasia is fairly straight forward. Upon reaching level 31, players will be able to ‘queue’ up for the game’s PvP arena. It’s a shame that players need to reach level 31 before being able to even touch the PvP aspects of the game. 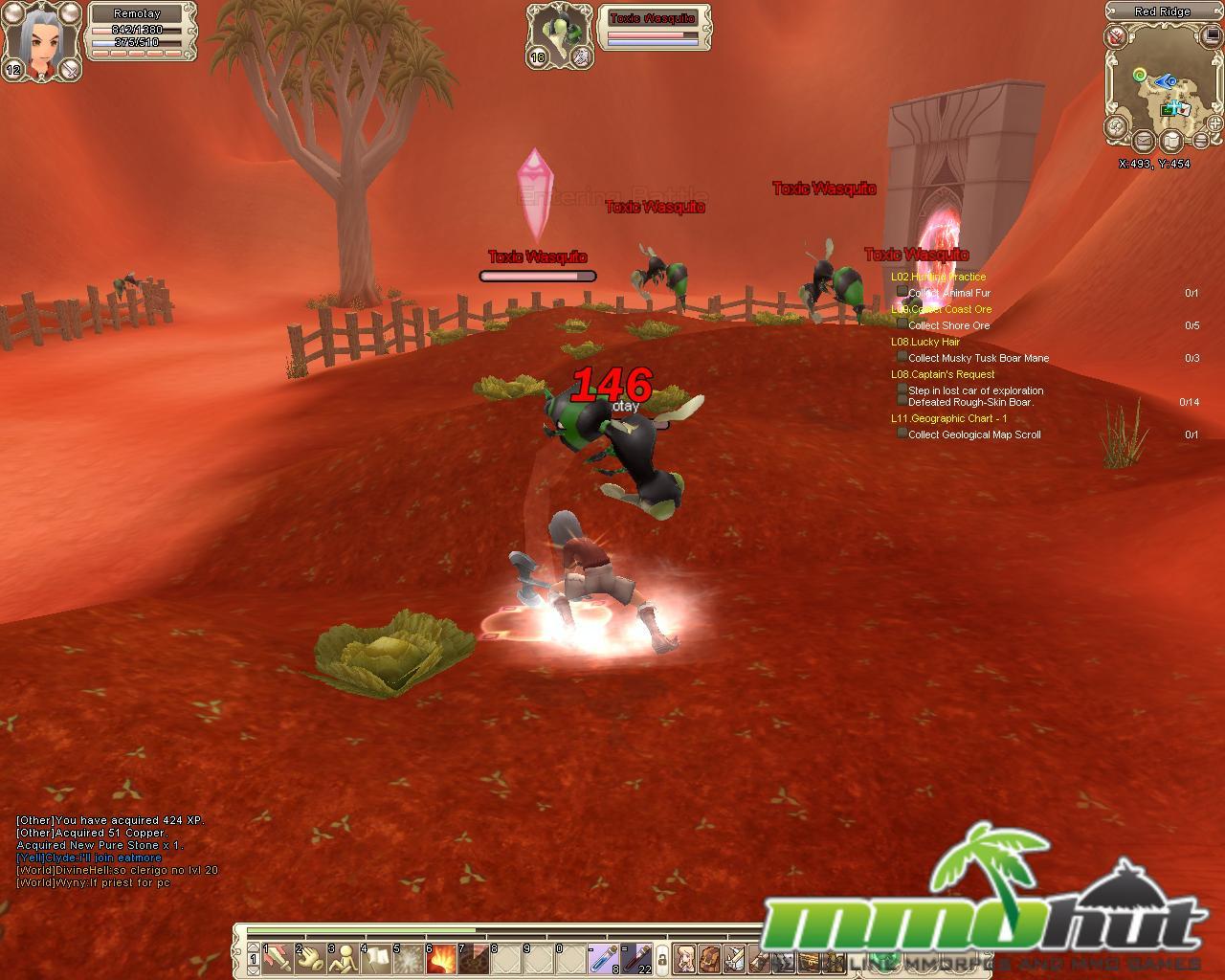 Like World of Warcraft and Runes of Magic, most of the items in Grand Fantasia are ‘Bind on Equip’. This means that once a piece of equipment is worn it cannot be later unequipped and traded. Grand Fantasia also has a modern looking ‘clean’ interface that functions quite well. The ‘auto walk’ feature is perhaps my favorite little feature in the game. Simply open up the map and click on any of the NPC / Quest markers and your character will automatically walk to that spot! Neat, huh?

Grand Fantasia is an incredibly fun anime inspired MMORPG. The game’s large game world and sheer quantity of quests should keep players engaged. The game’s ‘sprite’ system is also quite interesting and adds a unique feel to Grand Fantasia’s otherwise ‘generic’ gameplay. The game’s English translations and slightly buggy gameplay still need to be looked into, though. There are also still balance issues between the classes.