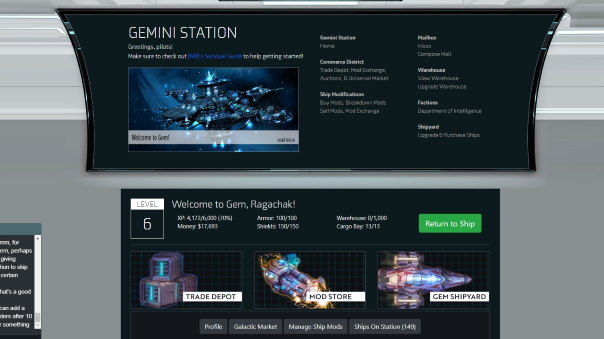 When MMOs were really getting big, I spent more time playing text-based MUDs, and continue to play them even to this day. Far more time was spent on them back then, however, so I was very glad to see that a browser-based text game is in development, Gemini Station. Gemini Station takes place on the titular space station, where players get mixed up into the political affairs of our star system and play the role of pilots/cargo pilots. It reminded me of a great deal of Wing Commander: Privateer in that way, but with a bit more complexity to it. I will say that Gemini Station starts pretty slow, and if you don’t take the time to read as many things as possible, you can, unfortunately, make the game much slower; that’s what I did. You start the game off with a ship, and a bit of money and the way to make more money the most reliable way is by buying cargo on a planet and selling it on a separate planet.

What I did, is I bought the canisters of gas on Jupiter, without taking the time to read the “Global Market”. On Gemini Station, you can go to the Trade Depot and click “Global Market”, and it will show you the size of each piece of cargo, where you can buy it at, and which planet is buying it. This doesn’t change, but I imagine in the future it probably could, or should. There are several sizes of cargo, from Small to X-Large, and the bigger it is, the greater cargo space you need. This can be improved by improving your ship, or through mods! Mods are a big part of the game, and each ship has several slots for these. You receive them as rewards for certain missions, by scanning Large Debris while flying and getting lucky, and by shooting other ships down. I couldn’t find players weak enough for me to murder, but there were plenty of NPCs that I did battle with. Despite looting several NPCs, I wasn’t flagged a pirate, so I have no idea how that works, unfortunately.

The Tutorial is very good though, and it adequately explains whatever you need to do in the game. A great deal of your game time will be spent flying from planet to planet, then going to their Government Center to pick up/continue missions. You’ll also receive missions/updates from your mailbox, so make sure to check it every time you see that a new message has popped up (such as when you arrive at a spaceport). When you travel from planet to planet, you’ll see a real amount of time that it will take to get there, so here’s where I tended to get sidetracked. Going from the Gemini Station to Mars/Earth is short – about five minutes. Heading to Jupiter was longer still (30 minutes), and Eris clocked in at over 70 minutes. What do you do to shorten the time? Either purchase mods, or drain the ships that are flying through!

Using “Long Range Scan”, you can see if there are nearby NPC or PC ships. You’ll also see their levels, which will help you determine if you should try and attack them or not (most cases, I probably wouldn’t unless they’re weaker). You can also drain their ships power source, which will increase your travel time by roughly a minute. Or if you’re feeling friendly, you can boost their ship’s power instead. Draining NPCs will lower your reputation with that planet slightly, however. It also gives you exp! Draining and Boosting both do, frankly. You can tell an NPC’s affiliation by the first few letters of the ship, too. Scanning for Debris seldom picks up anything, but on occasion, you’ll find a cargo or other useful things.

Most things you do give exp in small amounts, from doing battle, buying and selling cargo, and completing missions. Leveling up gives your ship slightly better stats, and other useful benefits, so take your time in this game – there’s no need to rush. But the overall waiting in the longer flights sort of frustrated me; not because I had to wait. I played MUDs, I’m used to it. But having no choice but to fly back to Gemini Station, instead of taking a flight elsewhere. So if I wanted to buy something on Eris and sell it elsewhere, I had to leave Gemini Station, fly to Eris, fly back to Gemini Station, then to that other place. Battles are pretty interesting too. They too are text-based, and there is a timer between shots, but it’s not long. Once you declare an attack, it compares your attack to their defense and rolls a die. If you beat their defense, you deal damage! Both players attack at the same time (or player/NPC). You have 20 turns to defeat the other player (or be defeated), and should you bring their shields/hp to 0, you can loot their ship and send them on their way. This can also happen to you, so beware. If 20 turns go to no victor, you break off and continue what you were doing. There are also group missions where you battle NPCs, but the downside to these, is you have to assume players will be there, instead of idling. I spent a half-hour in one of these, doing nothing, thanks to people just idling/being AFK. But should that not happen, you have something to do that is not focused around the main story, which I don’t want to spoil. I’ve enjoyed it so far though! The developer did say they were considering putting in a timer to pass over people that make you wait, so you can actually get some work done in Encounters.

But I like the idea of Gemini Station a great deal, and still, play it. If you were playing with friends, this would be potential great fun. I like that you spend a lot of time doing buying and selling of cargo, but it can start incredibly slow. There’s a lot of depth in this game, and I find that I genuinely enjoy reading the story, doing battle, and working on making money in this world. It also has a soundtrack you can listen to while playing, which you can turn on/off at your leisure. I do admit this probably isn’t for everyone though; not everyone loves relaxing text-based games. It’s mostly real-time, except for in combat, but it’s an absolute blast. It’s still got a great deal of distance to go, but I know the developer’s working hard on it, and if you’re a fan out of text-based games, you owe it to yourself to give Gemini Station a shot. Take some time, run it while you’re doing other things, and enjoy this challenging, fascinating MMO. There are definitely other people playing, so if you have questions, don’t hesitate to ask for help; the developer or the other people available in the game will surely be able to lend you a hand.